The Netherlands brings the symbol of peace with the beauty of the canal, the fairy villages, the windmills … but also civilized with the inventions which go ahead of its time. Let’s discover the reasons why you should visit the Netherlands through top 7 best experiences & fun things to do in the Netherlands below.

1. Visit Amsterdam with its famous bicycle and canal system 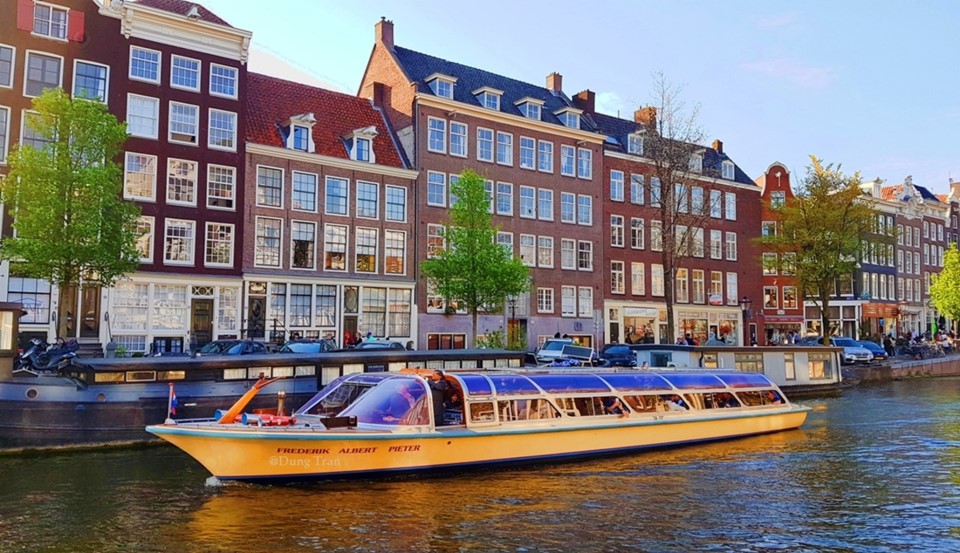 The impressive Netherlands canal system has been recognized by UNESCO as a “World Heritage Site”. 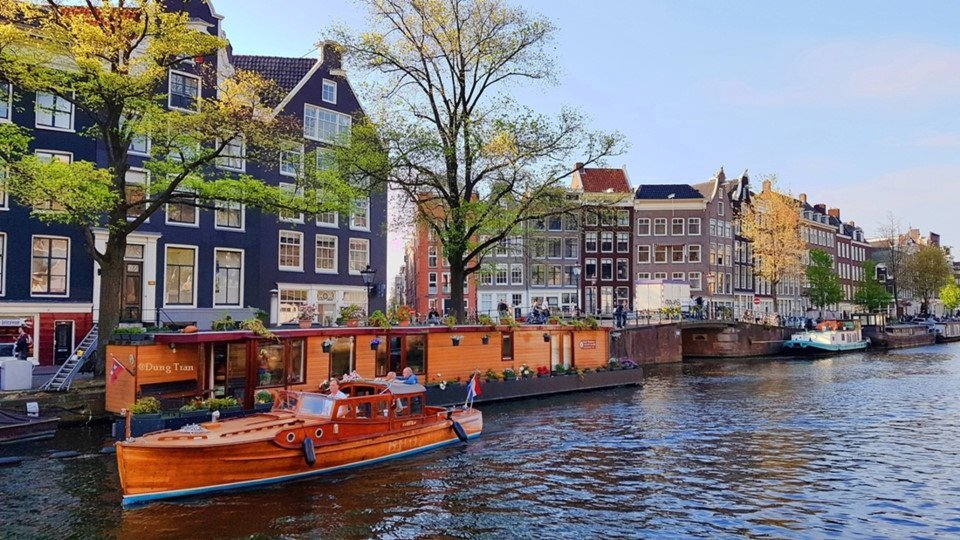 Traveling by boat on canals is an easy way to walk around the city. The canal construction is built to drain the marshland to expand Amsterdam. 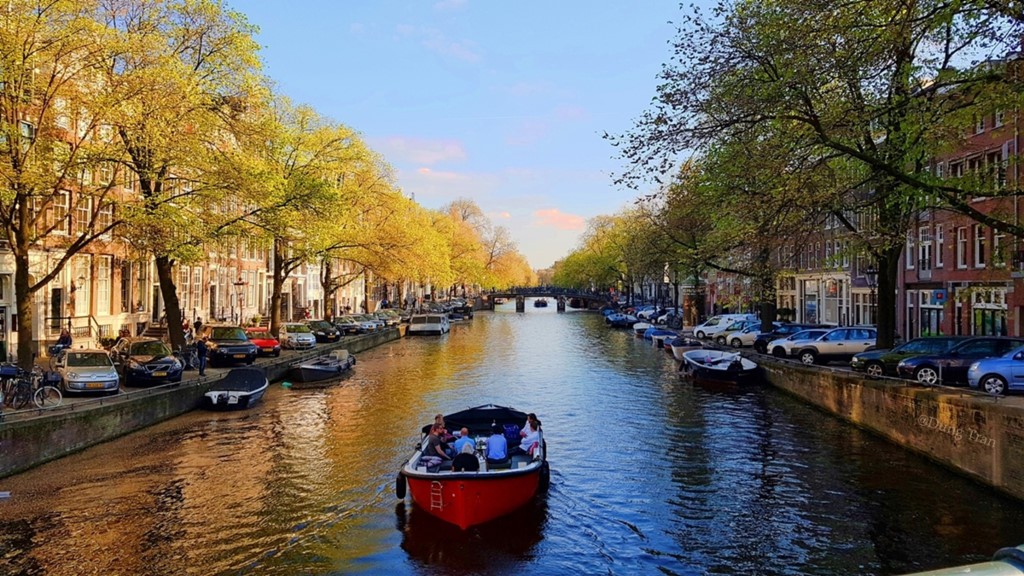 The two sides in Amsterdam canal close to the lovely houses, they are called the Dancing House. The land here is very muddy leading to the tilt of the colorful houses.

No having expensive cars, new bikes are the main vehicles which is encouraged for using in the Netherlands. You can see bicycles in everywhere, every corner of the road when having nearly 60% of the population uses bicycles as a daily vehicle displacement. The Netherlands navigate to a life to reduce environmental and pollution. 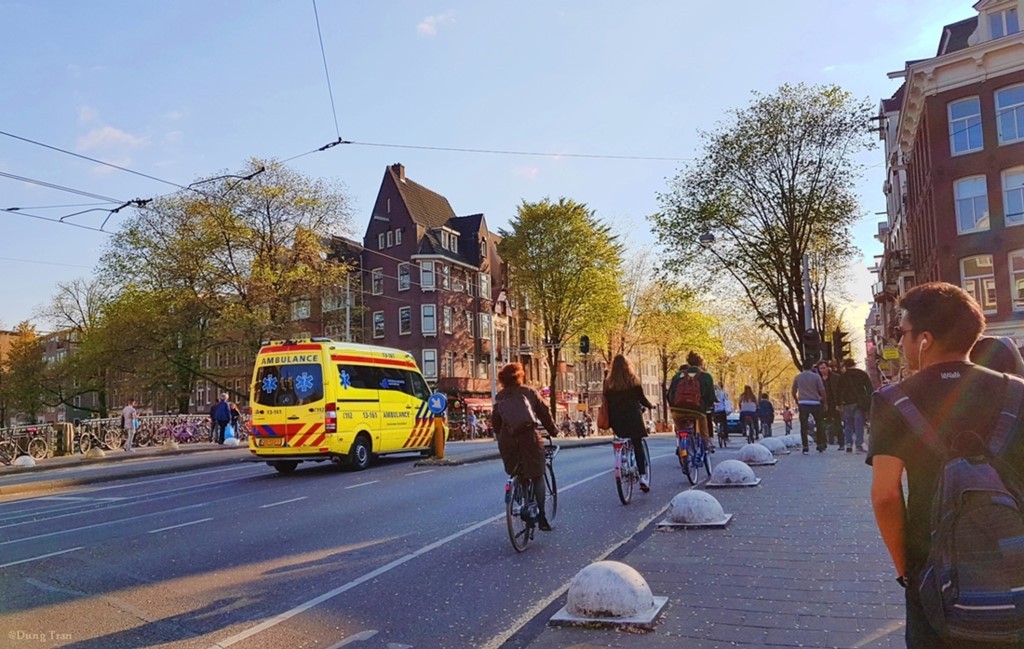 The tinkling train is also a popular vehicle in Amsterdam.

2. Ride a bicycle and breathes a fresh air filled with greenery 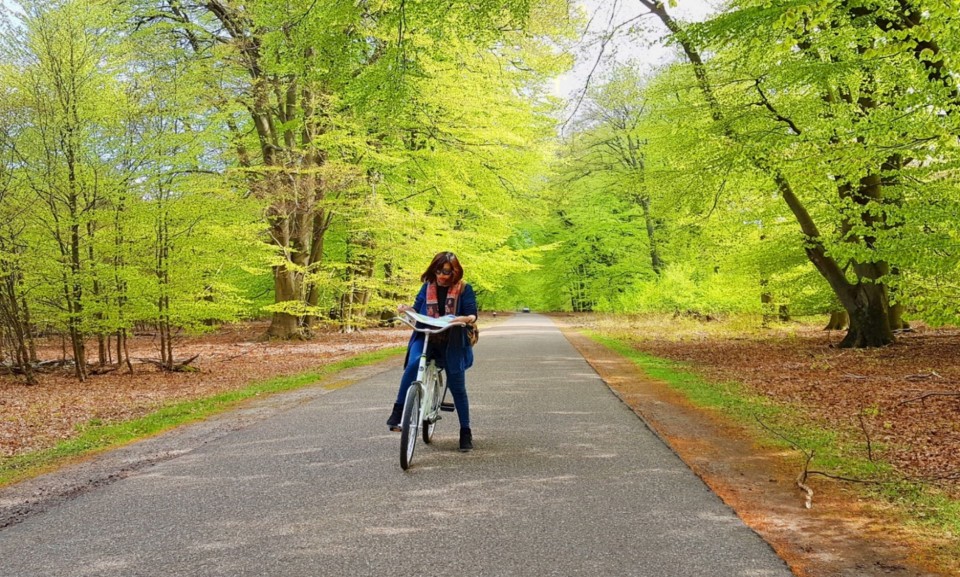 One of the major responsibilities which government in the Netherlands suggests is protect nature and wildlife animals. National parks with enormous green trees and occupy a large area, stretching across the Netherlands, intersecting with arteries. 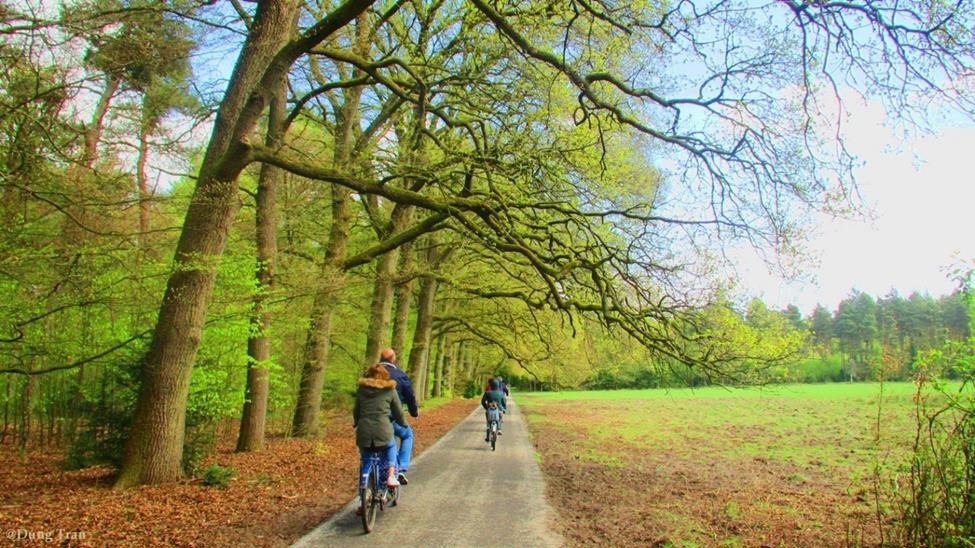 Park Hoge Veluwe is the most famous park in the Netherlands, with a 40 km road for using bicycles, and provides 1,800 car and free visitors. You should come here early when they open the door (8 am) to hear the birds singing and breathe fresh air. 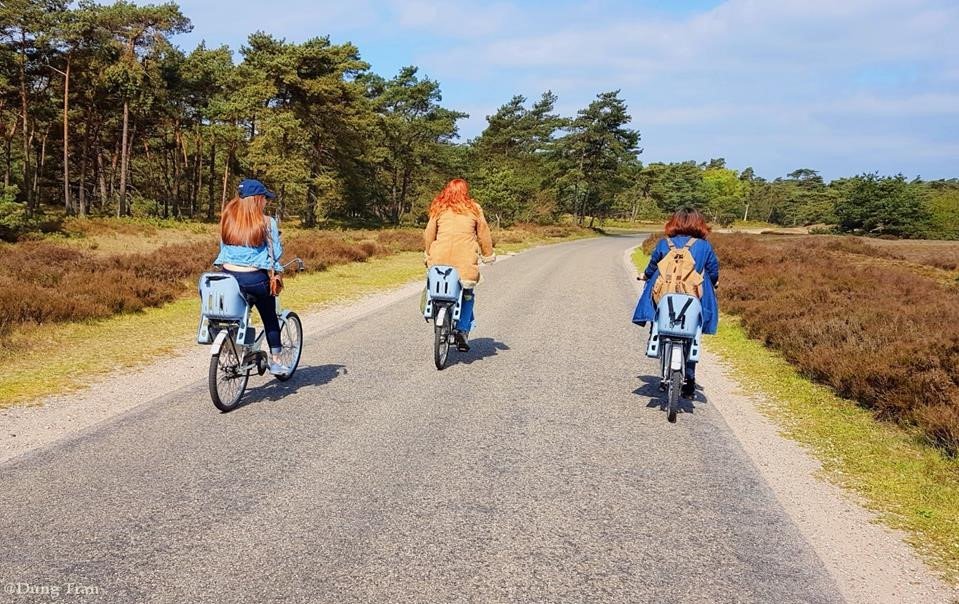 Large meadows of wild weeds, flowers and woody trees, the famous purple heather flower, but in the spring, flowers begin to bloom. The scenery looks like paradise. 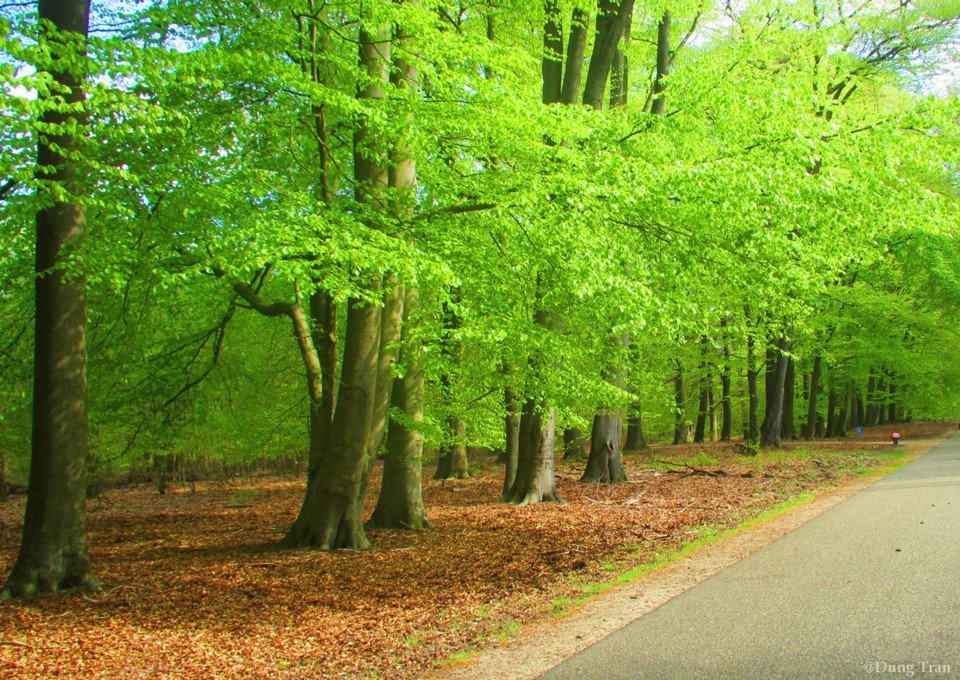 In Giethoorn, no having smoke, no having car horns. When coming here, people have to park their cars outside the village, renting the boats which are called “whisper boats”, they have no noise engine to “approach” the village, or you can walk through more than 176 wooden arch bridges. But many houses are still inaccessible by walking road. Even postman must deliver mail by boat. 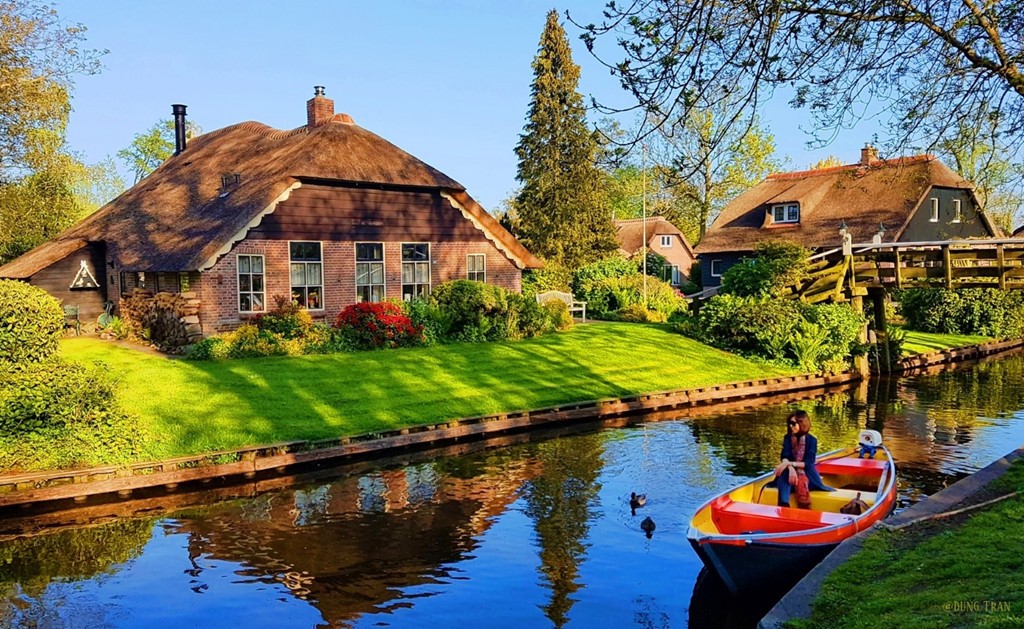 Here, you can rent a local boat for 23 dollars/hour. Usually, from 2 to 3 hours, you can complete the journey exploring this small village. 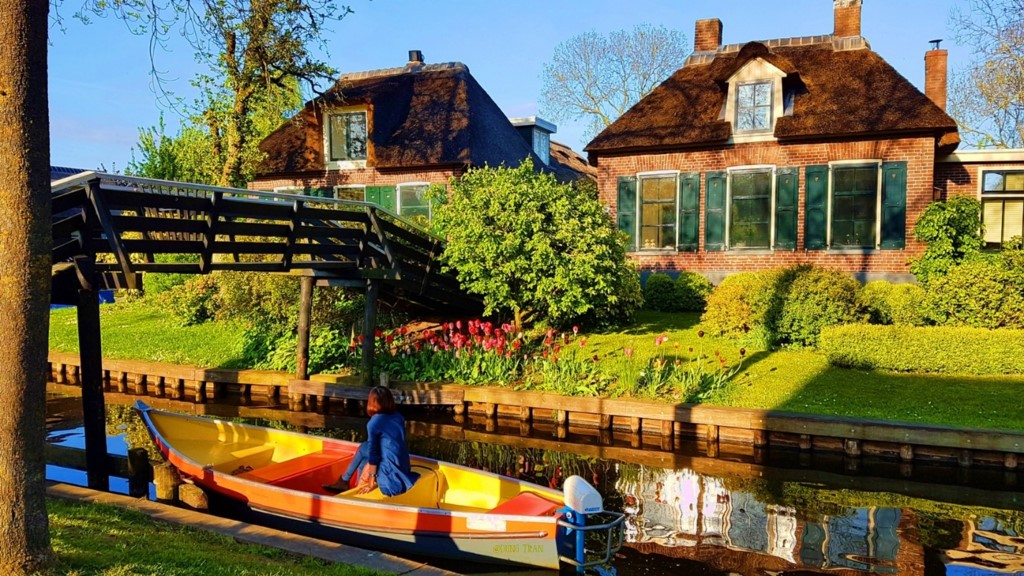 Giethoorn is in the province of Overijssel, Netherlands. The name Giethoorn (goat horn) comes from the discovery of the first inhabitants of the Mediterranean. They have found here hundreds of goat horns, the sequel of the historic flood in 10th century. 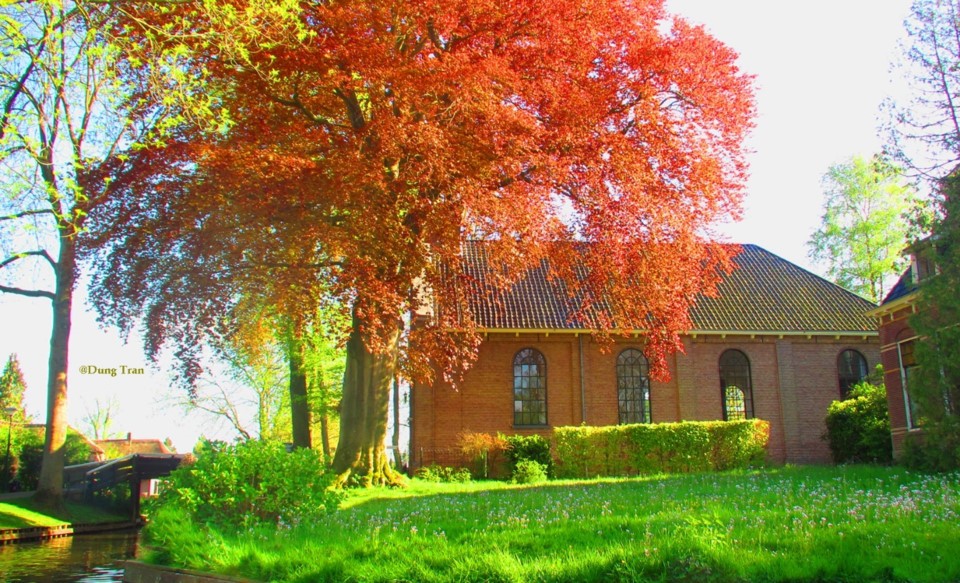 In Giethoorn, the sound is so good that you can hear the flock of ducks’ sound which is swimming under the water or other bird’s whoop which are flying above your head. 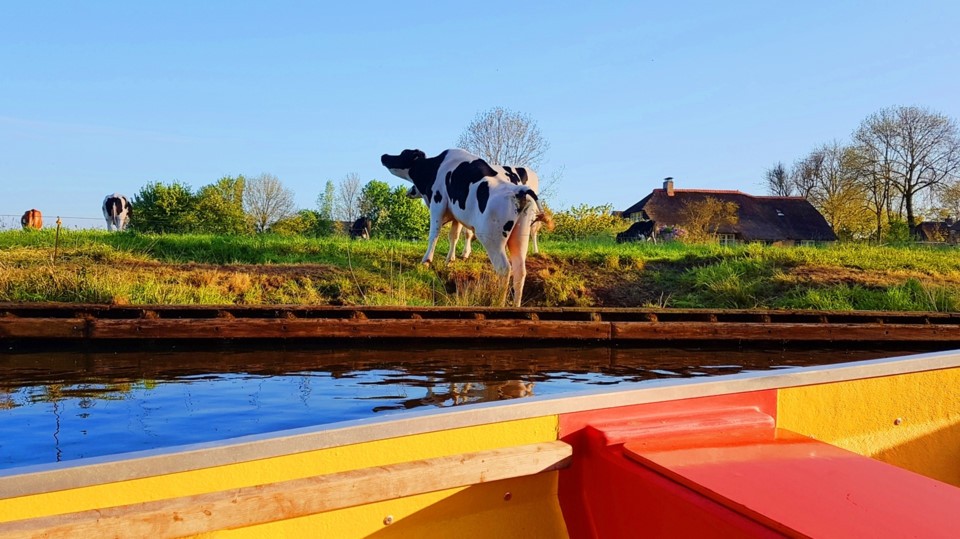 The ship is running along the small canal; go through cottage which has existing from the 18th century, giving you an unforgettable feeling.

4. See the oldest windmills in Netherlands 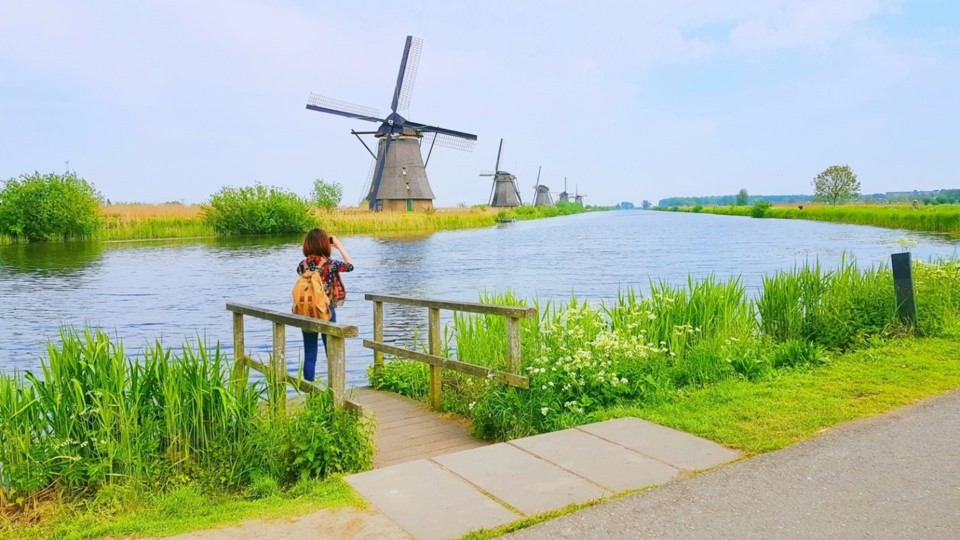 Ingeneral, tourists often choose to visit Zaanse Schans because it is close to the capital, the windmills are eye-catching colors. But if you want to discover the primitive and the oldest things, Kinderdijk village should be the first choice because it preserves the integrity of 19 oldest windmills in Netherlands. The village was recognized by UNESCO as World Cultural Heritage in 1997. They are responsible for the water flow, which are the pumps that rely on the strength of nature to keep the Netherlands from submerging under water. 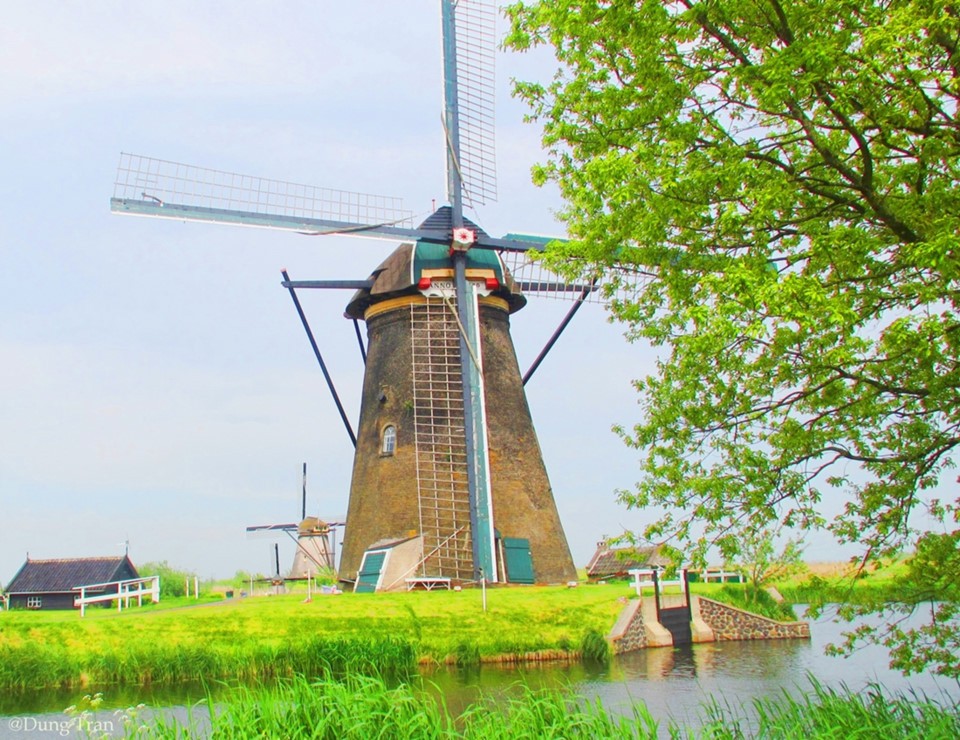 Coming to the village of Kinderdijk, you should rent bicycles to visit, walking around the snaky and serpentine roads; enjoy this peaceful and rustic scene. 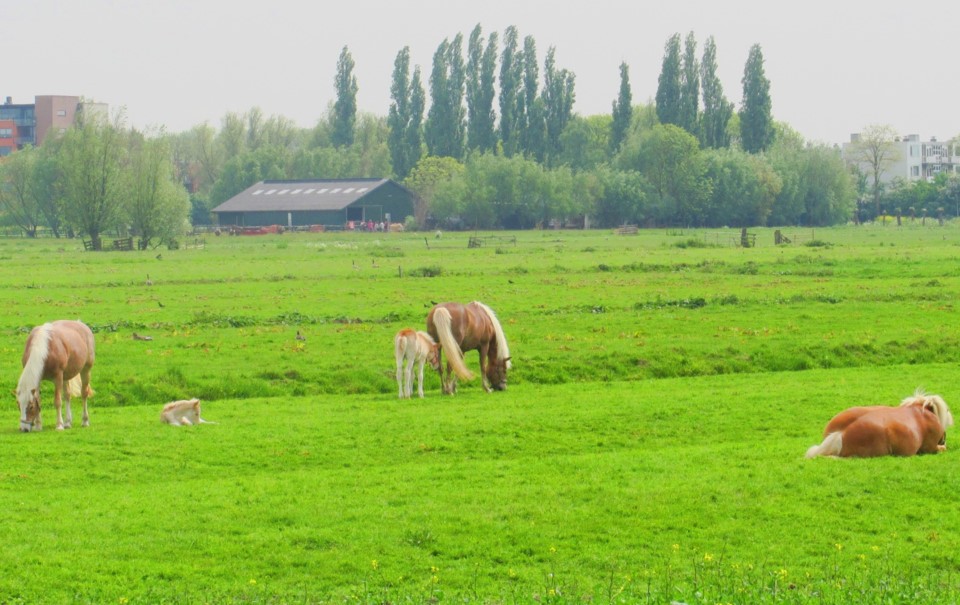 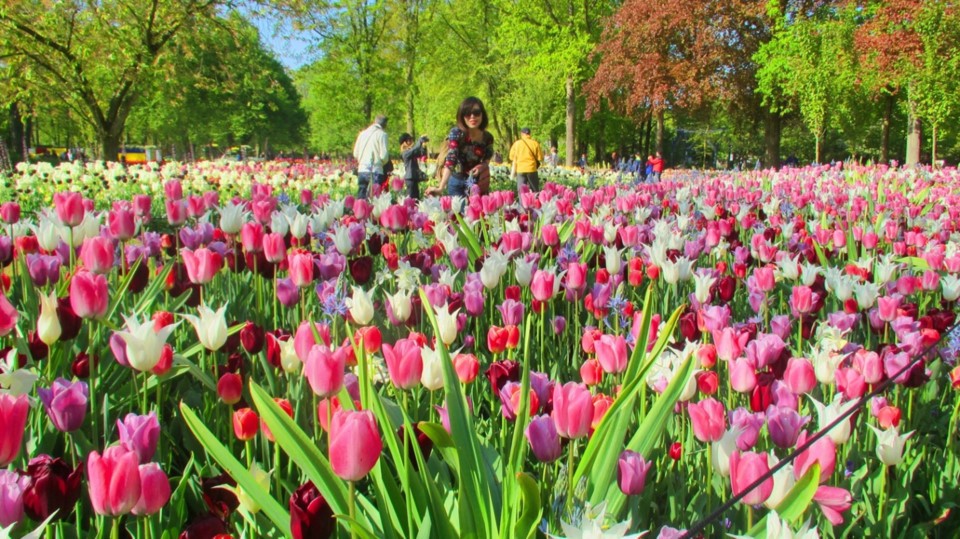 Keu Kenhof, about 30 km south west of Amsterdam, lies on a 30-hectare land where thousands of flowers, including tulips, symbolize for the beautiful Netherlands country.

Tulip has origin from Turkey but is most famous and most vibrant in the Netherlands with Keukenhof flower garden. Every year, the Keukenhof is open only for two months with more than 7 million tulips which are planted to serve tourists only. 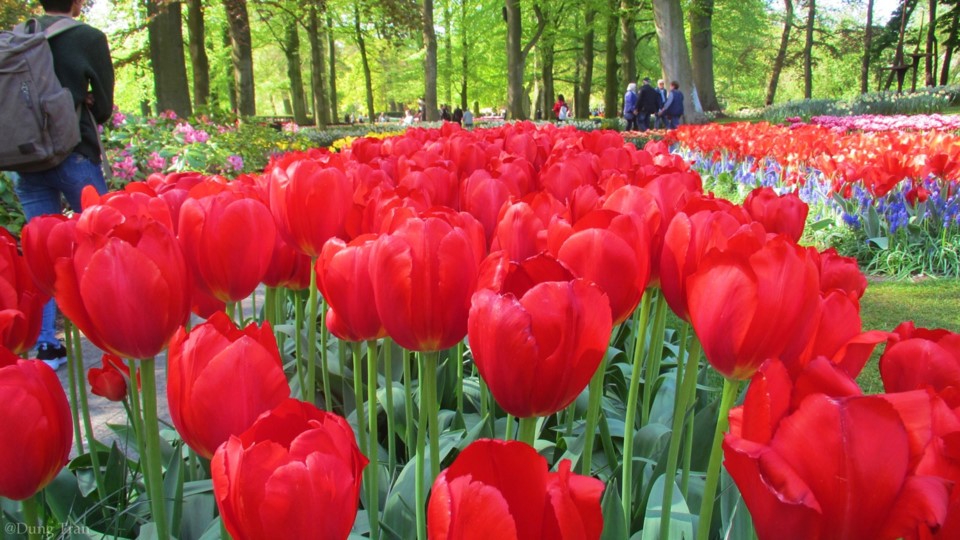 With the glorious beauty, the Keukenhof Gardens is worthy of the “Europe’s most attractive destination” and it gets an award from the World Travel Association. 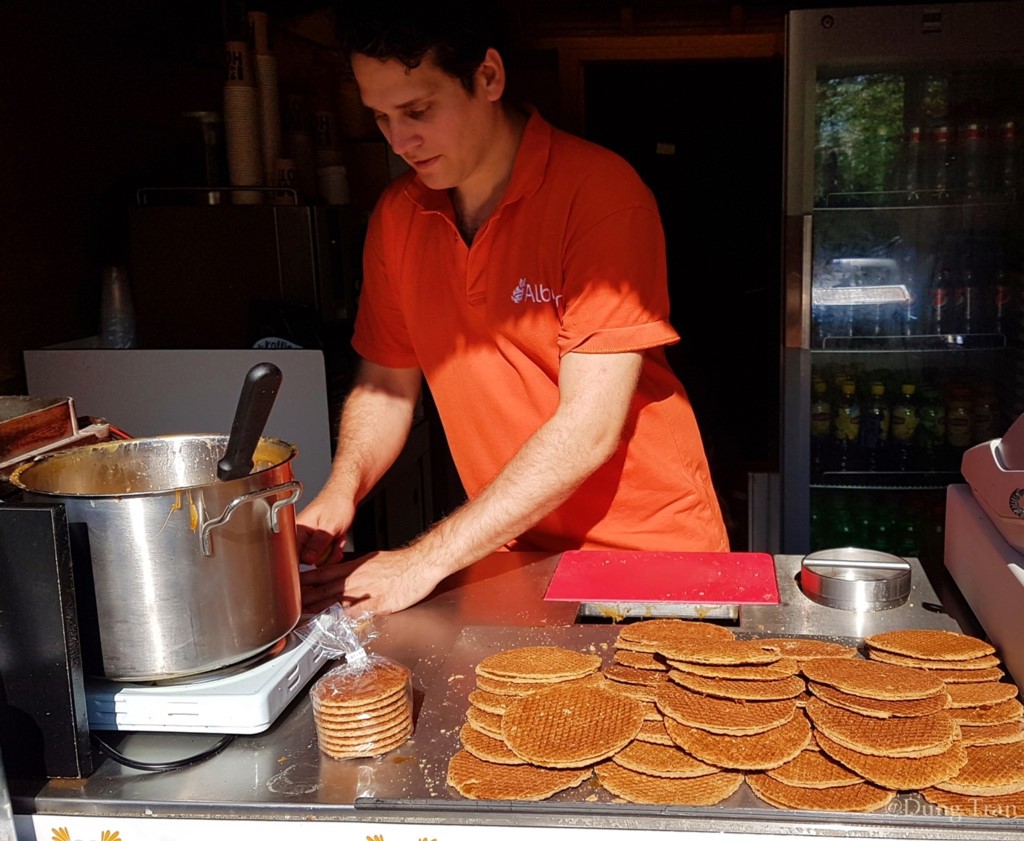 In the flower garden, you can buy cuisine of this country is waffles cake with honey and cinnamon aromatic flavor.

Anne Frank House is a memorial place a little girl who is a victim of a Hitlerite Jewish genocide and the author of “Anne Frank’s Diary”, which was published in 1942 at the age of 13. Visiting Anne Frank House in Amsterdam is a thrilling for everyone. When visiting, you have to line up a long time if you don’t book online in the “skip line” (not queue). When entering inside, you are not allowed to take pictures. 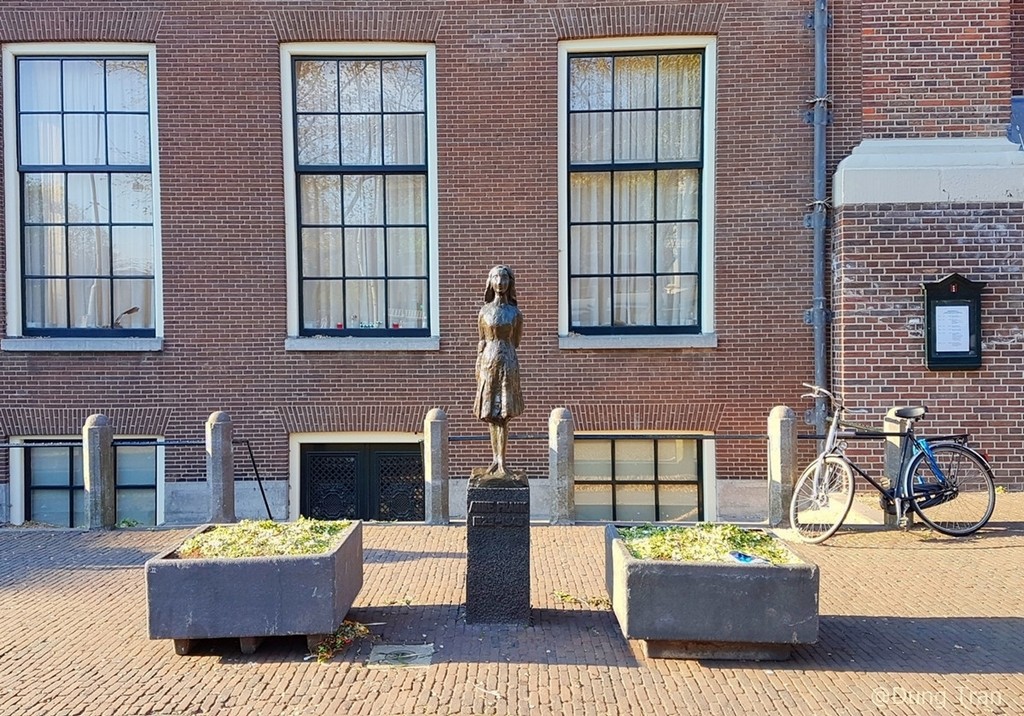 Anne Frank is in front of the church next to the house. Although, all of the experiences are still having the house of Anne Frank is very painful, it is a mark of history, record the mighty and harsh of World War. Anne Frank House and the classic diary is as a reminder that we should live each day to the fullest, to find joy in small things and love people by your heart. 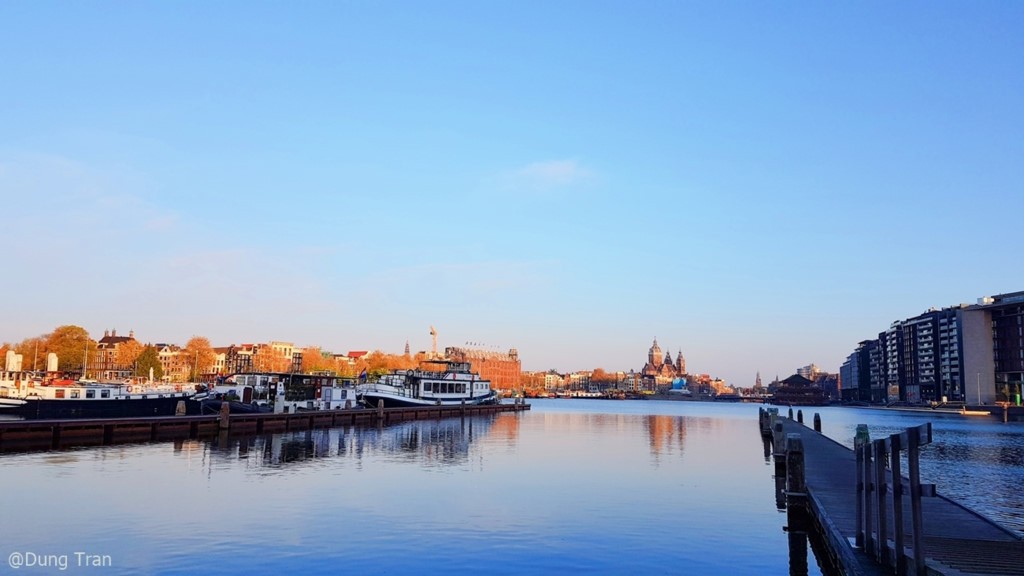 7. Overnight on boats along the Amsterdam Canal

Boats are popular accommodation vehicle in the Netherlands. Traveling to this country, instead of staying in regular hotels in the city, you can try to select “boat hotel” along the canals for a new experience. Dawn on the boat overlooking the smooth water surface to feel extremely fun and relaxing.