According to many myths and legends, Kathmandu was in the early days a lake, which was cut off with a magic sword by Manjushri, a Buddhist saint, towards the south near Chobhar and the valley became habitable. We visited Kathmandu in Central Nepal in the beginning of the spring and at this time of the year, the city looks like Hanoi (Vietnam). The cold weather spreads over the valley and makes it as tranquil as a flower hidden under the Himalayan mountains.

Tourists cannot wait to visit Tanman quarter with crowded foreigners and the animated atmosphere of the Oriental market with a little grassland in public and a little hustle of the industrial life. Indian colorful scarves and a little sunlight of the mountainous area in winter create the spectacular beauty of Kathmandu.

Along streams, shops are close together with selling an abundance of souvenirs and clothes. The art of carving bronze statues, souvenirs and worshipping objects in Nepal is excellent. Past craftsmanship is revived in the streets making guests amazed at the ancient and modern space with the combination of the local and international color. 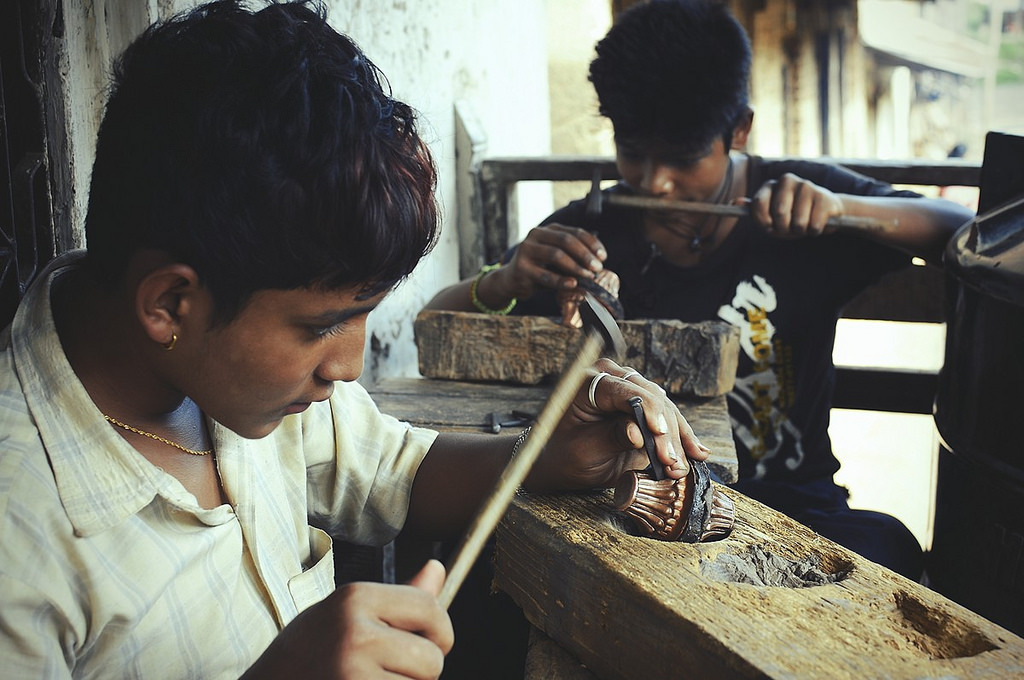 On this street, Thangka silk paintings with embroidery, depicting Buddhist deities, are displayed everywhere and remind me of two main religions – Hinduism and Buddhism – which bring local people the devotion and faith. Visitors are taken from street to street and can only move out with a promise of returning to experience Kathmandu in the slow life of the valley, the hustle of visitors and meditation and hope today.

From Kathmandu valley, you can view the snowy mountain as an imposing white wall. This hidden kingdom in the Himalayas is the treasure of mysterious stories and the isolated world of deities, followers and spectacular temples. One such temple, is the Kali temple, which worships one of the most outstanding deities in India – Goddess Kali. According to statistics, about 86% local people in Nepal are Hindu, which is considered the most ancient in history and is a part of the life of local people.

For Hindus, Kali is a sacred Goddess, who liked to exterminate but was ready to bestow a favor to her followers. She is the guardian angel of Kathmandu. According to legends, she was the wife of the destroyer God, Shiva. Hindus worship three supremes, Brahma, Vishnu and Shiva. Kali is the image of a Goddess with an open mouth, tongue out and earrings of dead men, necklaces of skulls and jewelry of snakes. The Goddess, who was both cruel and righteous, could not only destroy but also took the responsibility of reproduction. She bestowed favors and helped creatures grow. It is also two sides of a phenomenon, the outlook on life and the worldview of Hindus.

Temples and palaces in Nepal feature pagoda style cubic constructions, beautifully carved wooden rafts on which they rest. We visited Radet temple near a river, which is a branch of Hang river within Kathmandu capital. In the temple, there is often one or more Brahmans chanting prayers or blessings. By paying a small amount of money, the priests will put a red mark on your forehead or impart teachings from the Bible. These priests are ranked in the highest position in society with spirit power and religious foundation, which is respected by the community.

In Hinduism, not only human beings but also animals, plants and even things have their spirits, power, knowledge and high competence and they have Gods. No one, from heads to scholars can understand the Gods because every deity has their own incarnation from generation to generation. In Radet temple, visitors can pray for healing diseases in front of a sacred stone.

After Kathmandu, we travel to the ancient imperial citadel, which features the most mighty and imposing architectures of the ancient Bharatpur, Himalayas. We feel emotional whenever we visit ancient cities. It is hard to answer why we have those feelings? It may be the sediment of time. Time changed the world continuously and made people remember their emotions. Time is cruel but fair, cold but considerate. Life always has Yin and Yang, life and death or good and evil. That message of Hinduism and Buddhism exists on every corner of this ancient citadel, from squares to streets. 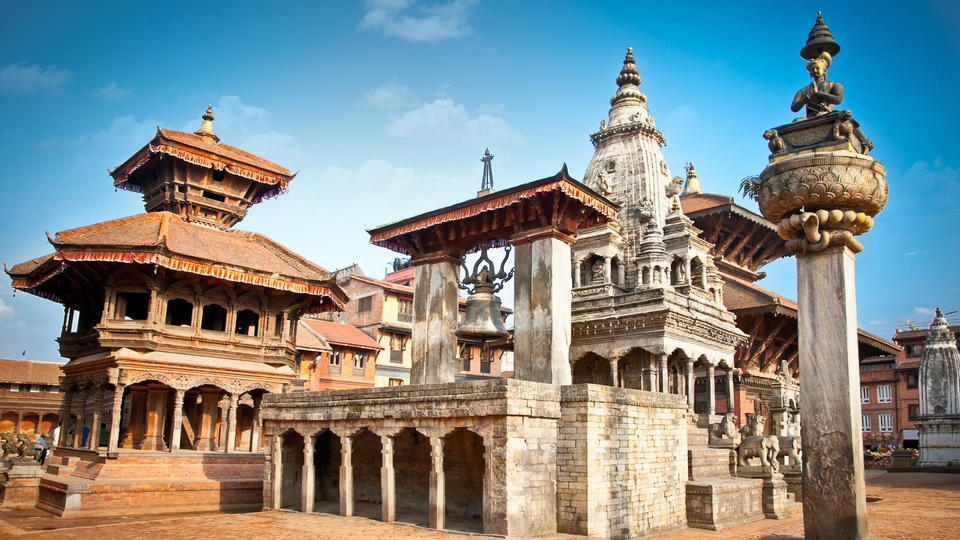 During our journey in this sacred landscape, which holds many mysteries, we are enchanted in the magnificent beauty of nature, whether it is at sunrise or sunset. After seeing the exquisite Everest mount, we are amazed at the sunrise in definitely fresh air on Nepal’s mountains. The night seems to be separated into two parts with the cut of the mountain range reflected on the sky and reveals marvelous fissures of Ranet’s peak at the height of 7,400m. The sun rises in front of us. In the light fog, mountains and valleys are still dim as if they are in a deep sleep. 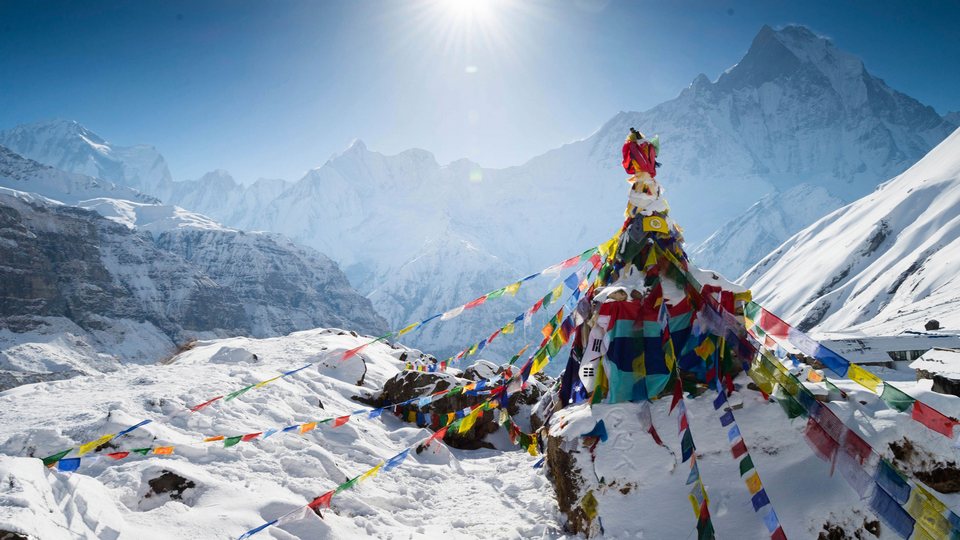 The morning in the valley is changing slowly. Following sunlight in the fog and fresh, pure atmosphere, guests feel like flying high in the air as if they are wandering in the wonderland. When looking at grandiose scenes of nature, we recognize that Nepal unobtrusively attracts a part of the modern world in a wise and careful way.

Back to Kathmandu, we visited a religious site, which plays a significant role in the religion of Nepali people. Visitors can easily recognize it as a temple of Buddha. Colorful cloths overshadow the sky and Buddhist’s eyes are wise and powerful. The sonority of religion exists in every corner. It’s Boudhanath tower of an ancient Buddha. According to the local people, Boudhanath temple was built in the 5th century by the princess of Nepal, who asked her father to allow her to construct the tower to worship the Buddha and then became the holy land of Buddhists in Nepal.

Since the existence of two main religions – Hinduism and Buddhism, visitors in Nepal can tour around Hindu and Buddha’s relics, scattered in the country. Until 1959, the local people and Tibetans regarded the Boudhanath as a symbol and the most sacred temple in the ourskirts of Nepal. Therefore, Tibetans often go on a pilgrimage to this place every year. Buddhism’s architectures in Nepal bring the characteristics of Buddhism – Tibetan Buddhism. We wander around the tower to feel the sacred atmosphere of the Tibetan Buddhism with the respect of the spirit world.

In the homeland of Buddha

Nepal is 8% Buddhist and 86% Hindu. However, this homeland of Buddha makes us feel that this religion is unobtrusively spreading around the mountains to penetrate into the life of local people.

Nepal is not a country of Buddhism but its three destinations, which are connected closely with the religion, bring fame for this nation. This is where the Buddha was born, Tibetan Buddhism originated and where the Bodhisattva Namo Manjusri practiced his religion. We continue our journey to a sacred land of the Buddhism – Namo Manjusri mountain on a high hill of Swayambhunath, about 200km from Kathmandu. 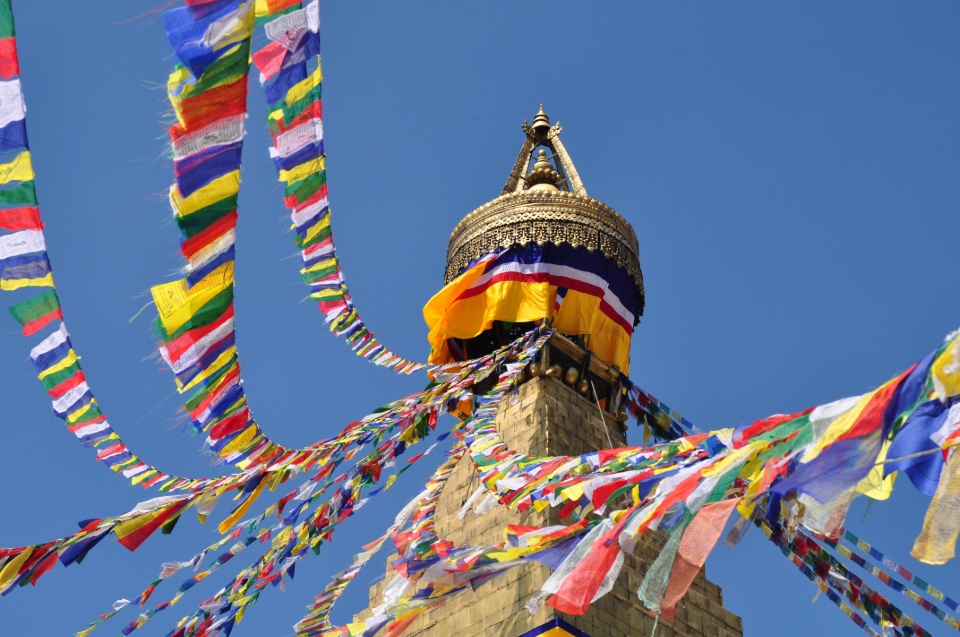 360 stone steps lead the way to Namo Manjusri peak and is shaded with trees. Small stupas appear along the path with Buddha’s statues, which were carved skillfully and most of them were made of stone, bronze or cement. According to the legend, Sarila (ash) of Buddha Mahakassapa is kept in the big stupa on this hill, however, local people believed that the stupa was built to worship Namo Manjusri.

You can buy candles for offering to the Buddha along the way or on the peak, where there is a community of splendid stupas and temples. This is a particular custom of Tibetan Buddhism, which is both mysterious and sacred. They pour melted gold onto the white stupa to paint lotus flowers to manifest their worship through the contribution of other people.

The architecture of Namo Manjusri was constructed by blocks of bricks. The bronze upper layer is the main model of the vestige. The stupa was built by the reign of King Victani and completed by the Mala, from the 8th – 15th century. However, we see some statues, which date from the 7th century, in this royal-court room such as the statue of Sakyamuni Buddha. All Buddhists in Nepal consider this place as the most sacred land of the country. The legend has it that Van Thu, the Bodhisattva of wisdom of Buddhism, used to live here.

We leave Nepal full of emotions and memories of a cherished country, and promise to return to this holy land in the future.

Some best day tours, trips, activities and transfer services, tickets in, from and to Kathmandu you can refer to