My journey to the west of Vietnam was not as happy as other trips because of tragic love story. Before I decided to visit the Mekong river delta, also known as the west of Vietnam, I was impressed by a legend of a sad love story between King Bao Dai and a local girl, who was a Christian and known as the last Queen of the Feudal system in Vietnam. It was Queen Nam Phuong. In order to give this love story into a happy wedding, the French asked the permission of the Vatican to let both of them keep their own religion but that their children would be baptized and follow Christianity. Let’s discover the beautiful region of Vietnam through my Mekong Delta travel blog.

My first journey to western Vietnam left me with a memory about a distinctive region, with a blend of various religions of Vietnamese people, including the Cham and Khmer groups to create a multi-colored religious life.

Here in western Vietnam, I could visit the first mosque of the country; witness local people pray by the wooden statue of a famous priest or see Buddha statues in the typical Khmer pagodas.

Khmer are well-known for their pagodas and southern Buddhism. Among 600 pagodas from Khmer people exist in the Mekong river delta. Doi (Bat) pagoda, also known as Mahatup in the Khmer language, is the most popular. This pagoda has its name because every afternoon, hundreds of bats stay in the pagoda’s garden. Some of them weigh 1kg and have a wingspan of 1.5m. 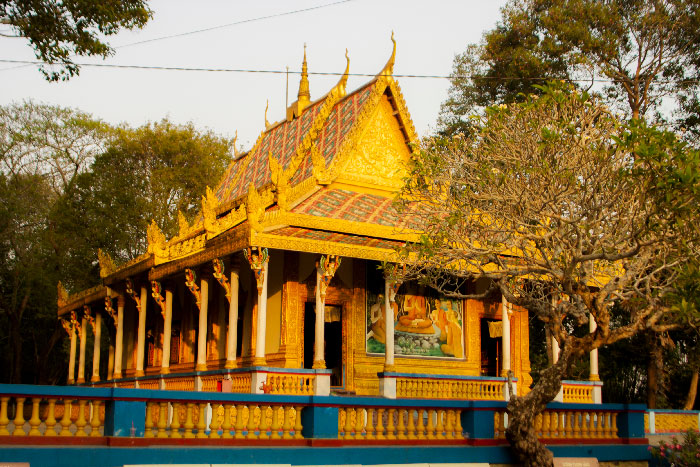 Doi pagoda features the traditional structural style of Khmer. If you stay far from the pagoda you will be able to see patterns of colored tiles on two roofs. Naga, the snake deity, is sophisticatedly carved on one side of the roof while fairy tales, which are believed to represent the challenges that Buddhists have to overcome on the way to leading a religious life, are designed on pillars around the central chamber.

Saying farewell to the 400-year-old pagoda, I travel to Ca Mau, where I visited Tac Say church in Bac Lieu. From the entrance, this church amazes visitors with its huge and stable structure, built on three floors with a high cross. All the interiors are made of wood mixed with yellow light in the late afternoon that makes this place seem very sacred.

Tac Say church is famous thanks to its priest Truong Buu Diep, who was arrested along with over 70 Catholics because of conflicts among sects in 1946. In order to protect his followers, priest Diep opted for his own execution to prevent the persecution of his flock. His sacrifice can make a nonbeliever like me emotional when I visit his grave.

Muslim religion of Cham people in An Giang

Catholicism and Buddhism are two of the most popular religions in Vietnam, but not the only ones. There is a small community of Muslim people developing in Chau Doc city of An Giang province with its own traditions.

The mosque in Da Phuoc, Chau Doc is highlighted with a rounded roof, which symbolizes for the sun and a crescent. A white tiled hall brings the feeling of a long and large space. Especially, blue and white colors in the mosque are also seen in other mosques in the world. However, the Cham village in Da Phuoc expresses its own characters with palmyra and banana trees of this Southwestern region. 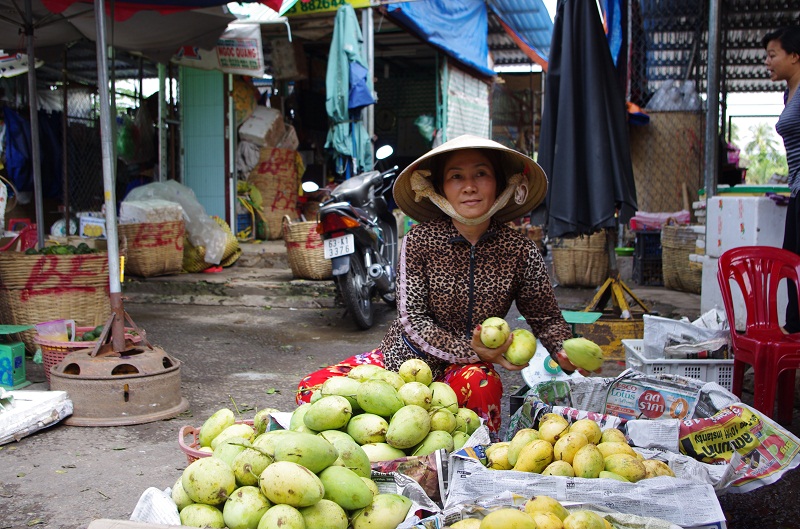 I had the opportunity to view ancient historical objects of this region at Cham sculpture museum in Danang which gave me some context. However, not until I saw Cham women wearing hijabs weaving skillfully, that I highly appreciated their efforts of maintaining their traditional customs and habits. 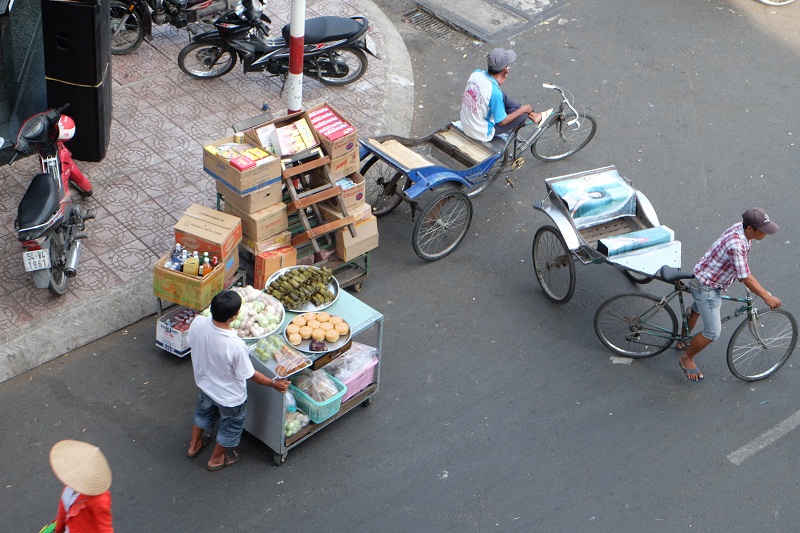 While visiting the Muslim village, I wished I could have had more time enjoying a bowl of Hallal noodles, talking with doctor Mohammed and following local children to their typical Cham stilted houses.

I will definitely come back here to do what I have missed on this journey and to explore the daily life of Vietnamese, Khmer and Cham ethnic people in the southwestern Vietnam again.

+ Itinerary: My journey started from Can Tho to Soc Trang, down to Ca Mau and then to Chau Doc.

+ Names: I was impressed by the regional names, including Cai Rang, Cai Be, Cai Mon, Tac Cau or Chac Ca Dao. 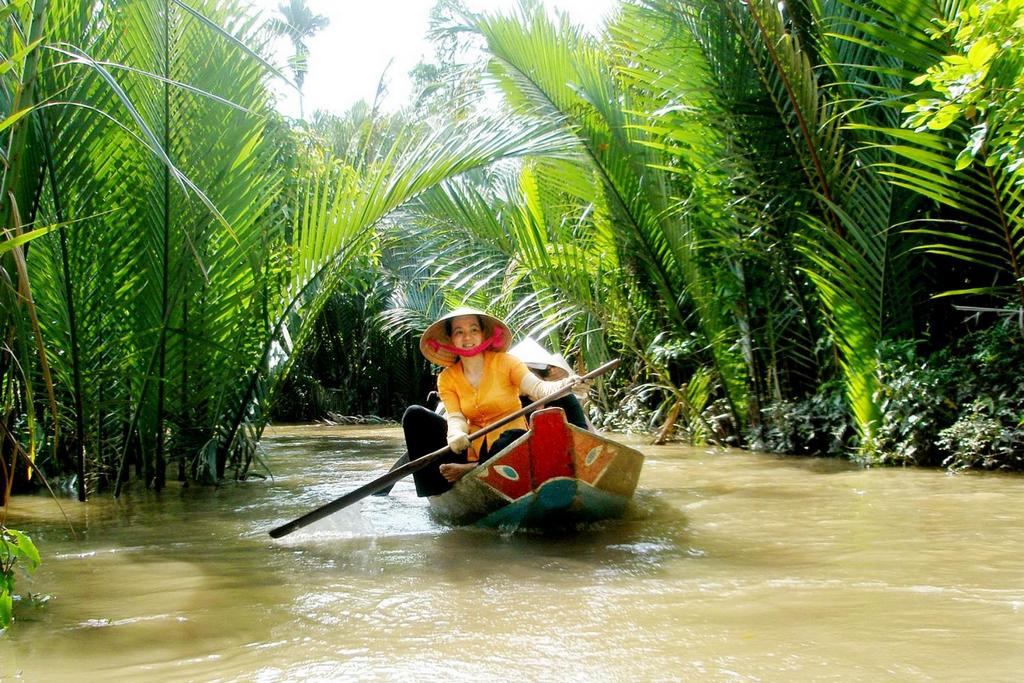 + Food: Dishes in the southwestern Vietnam are often sweet, from the taste of lotus roots and feature caramelized fish as well as fish hotpot.

+ Hospitality: Southwestern people are very hospitable. If you wander around the village at noon time, you will almost certainly be invited to have meals with local people.

+ Inspiration: If you are looking for a book to reading during your journey here, The Lover written by Marguerite Duras is a good one for you. Written in the landscape of the river area in early 20th century, this novel describes a love story of a couple, who overcame their limitations and principles to have a happy ending.