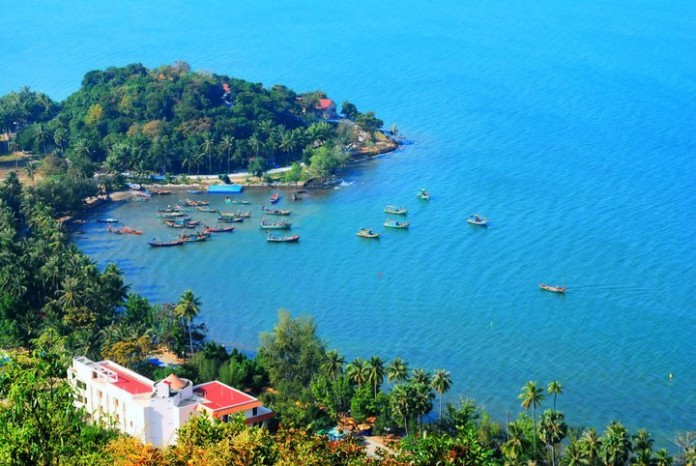 As a well-known cultural and tourist attraction located in Mekong Delta, Ha Tien, with its picturesque beauty spots, has captured the attention of visitors both domestically and internationally.

The Land of Ha Tien is also popularly coined as “Thap Vinh Canh” (Seven sights) because of it seven famous places.

Ha Tien is a district-level town in Kien Giang Province, Mekong Delta of Vietnam which borders Cambodia to the north with a 13.7-kiometer long borderline, Kien Luong district to the east and the south, the Gulf of Thailand to the west crossing twenty-two-kilometer long coastline.

Thanks to the dreamlike endowed sights, Ha Tien has offered tourists with numerous incredibly attractive destinations.

To get to this place, visitors have to depart from Ha Tien town to Thach Dong Cave through Highway No.80 (in the direction to the international border gate Xa Xia). After crossing a distance of nearly 7 kilometers, take a right turn, Da Dung Mountain is about 2.5 kilometers ahead.

The mountain is made of a one-hundred-meter high limestone. Being looked at from far away, it appears as an isosceles trapezoid. That cliffs are vertical makes it name – Da Dung Mountain (Erected Rock).

Another name of the mountain is Chau Nham which has prevailed for a long time with a number of legends. The way to Da Dung Mountain is relatively difficult.

In other words, while bluffs challenge visitors in some distances, winding, dangerously downhills are waiting in somewhere else on the road. Some rocky caves on the way are so narrow that only one person can go through at a time.

It is geological structures, erosions as well as other natural long-term impacts that create approximately 14 caves of various sizes including Me Sanh cave, Le Cong Gia cave, Biet Dong Cave, Bong Lai cave or Than Kim Quy Cave and so on.

To Chau Mountains which is located in the west of Dong Ho Lake, To Chau, Ha Tien town, Kien Giang province, include Dai To Chau (a big mountain) and Tieu To Chau (a smaller one).

While Dai To Chau Mountain is bigger in size, Tieu To Chau is full of vitality. Being by Dong Ho lakeside, this smaller mountain seems to be reflected on the water face of the Lake.

There are a large number of temples and pagodas hiding under the shade of green, fruited trees on the top of Tieu To Chau Mountain.

Being at its summit, tourists should grab their rare chances to have an overview of Ha Tien town.

Thach Dong Cave, one of ten famous places in Ha Tien in its old days is in My Duc village, Ha Tien town, Kien Giang province.

To pay it a visit, tourists have to go from the center of Ha Tien town towards the southwest border crossing 3 kilometers. Thach Dong Cave is there, surrounded by weeds and trees.

On your halfway up to the mountain summit, it is ideal for you to have a look at peaceful Ha Tien where Cambodian hamlets appear vaguely at the foot of hills along the border.

The mausoleum lies at the foot of Binh San mountain, facing to To Chau Mountain and Dong Ho Lake in the west. It includes temples and tombs of the Mac scattering around the mountain.

Two ponds of lotus in front of the mausoleum legendarily were dug to store fresh water for Ha Tien residents’usage during dry seasons.

Apart from the historical values, the mausoleum is also highly aesthetic because of its harmonious layout and subtle sculptures. Having passed a long period of nearly 300 years, the architectures of the mausoleum as well as temples still remain its old features.
This spot has now become a tourist attraction in Ha Tien town.

Covering an area of 2.5 hectares in the center of Ha Ttien town at 75 Phuong Thanh Street, Binh San district, Tam Bao pagoda (or Tieu temple) heads to the east and prides as it is one of ten beauty spots praised in a famous poem named Tieu Tu Than Chung by Mac Thien Tu.

The old temple has been destroyed by the time but the remains are still noticed at the walls. It has been repaired several times. The current architecture was decided by the Buddhist monk Phuoc An of thefourthh generation of Lam The kin. It was built in 1930 when Golden Oak trees were planted.

Tam Bao pagoda, one of the ancient, well-known pagodas in Ha Tien town has attracted tens of thousands visitors and Buddhists.

Passing To Chau bridge, take a left turn at the roundabout ahead, follow the Provincial Highway No.28 towards the west of Ha Tien town center, you would get to Mui Nai Beach after going distance of roughly 6 kilometers.

The beach enchants visitors with its temperate climate all year round and two beautiful sandy beaches: No Beach and Bang Beach.

While No Beach lying beside a busy fishing village, Bang Beach pleases its tourists by sloping gently to the sea with slight waves. This would be a perfect place for visitors to sink themselves into cool seawater.

What makes the uniqueness of Mui Nai Beach is dark brown sand whose colour is completely opposite to the continuous slap of silver-white waves against the shore. And when the waves leap over and interweave each other, a strange black can be noticed.

This is because the sand here is accompanied with a large amount of mud which is useful for people’s skin, according to a local resident.

Mui Nai Beach offers an impressive array of beauty spots, specialities or recreational beach activities and so forth.

Spreading over 1.047 hectares at the junction of Vinh Te cannal and Giang Thanh river before they flow into The Gulf of Thailand.

Dong Ho Lake should have been called a lagoon or a pool but “Lake” has been used for such a long time that forms people’s habbit of calling it.

Looking at it from high in the sky, it appears as a lake surrounded by To Chau Mountain, Kim Du Mountain and Minh San Mountain without the sight of the seaport. This probably explains for its name.

Dong Ho Lake has great potential development of eco-tourism. That is to say Ngu Ho mountains (Five Tigers Mountains) to the right side, To Chau range to the left side, Giang Thanh river to the east and Ha Tien River to the west have made a dreamlike picture of Dong Ho Lake.

Not only do the simple, quiet and peaceful sights attract visitors but valueable biodiversity also makes a considerable contribution to the development of tourism in the area.

The temple is on provincial highway No.28 in My Duc village, Ha Tien town.

It has special architectures like the Khmer dwelling in southern Vietnam. In particular, the roofs are carefully carved into subtle details winding along the roof columns.

There is a large campus with big trees for those on their pilgrimages. The temple is also a place where festivals and rituals of Khmer people in local area and neighbouring regions take place.

The prison, the former French jail built in 1897 with a budget of 1.800 French Indochinese Piaster, is now at the end of Mac Cong Du Street.

Covering a rectangle area which is thirty meters in length and twenty-five meters in width, the prison is surrounded by robust rocky walls. There are three sequences of detention rooms without windows but for iron frames for each room and four watchtowers at four corners of each sequence.

Coming to Ha Tien prison, visitors would have an opportunity to see the remains and relics of meaningful, miserable Vietnamese ages when the French intruded the country.

The prison not only shows the brutality of the French but also indicates Vietnamese strong revolutionary spirits, patriotism and bravery.

Going to Ha Tien town center, it is easy to notice a busy and noisy trade center right on Tran Hau Street where the night market offers different kinds of goods at reasonable prices.

To get there, you have to go across To Chau Bridge and turn left. The Market is by the lake side, next to Dong Ho Park.

Various commodities ranging from cosmetic products, clothes to handicraft goods are available at the pavement. Besides, it is advisable that you sample some local specialities including Nam Vang noodles, seafood, sticky rice or crap noodles and so forth.

What to do in Taipei 101? — The fullest Taipei 101 guide, a place that captivates Taipei visitors