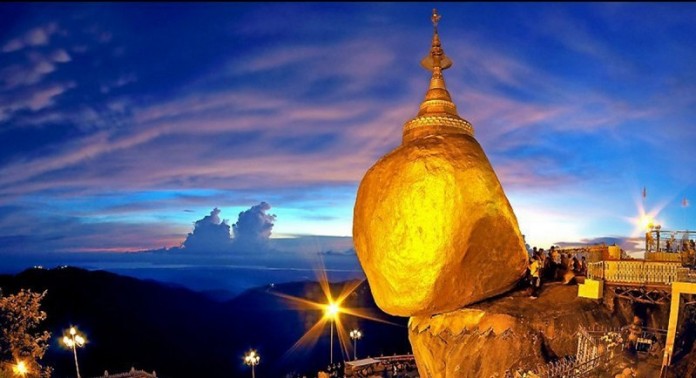 Myanmar draws a lot of Buddhism-followers every year due to its myriad number of sacred pagodas and temples. These 5 spots below are considered the most outstanding ones.

Shwedagon Paya, which is located in Yangon – the former capital city of Myanmar, is acknowledged as the symbol of the country. This gilt rock lies 100 meters higher than the city, thus, it is possible to admire this place of sanctity from anywhere in the city. The local people believe that it was built 2,500 years ago in order to enshrine the hairs of Gautama Buddha left for his two brothers.

The place of Shwedagon Paya also gathers a stupa and many temples of the city. The best time to enjoy the tranquility of this attraction is in the early morning. Or joining a group of pilgrims in the sunset is also a good idea to marvel at the magnificence of Buddhist architectures there.

This famous pilgrimage site is situated in the southeast Myanmar. Soaked in the brilliant sunlight, the gilded rock glitters magically and catches everyone’s eyes. The most impressive feature is the stupa on the top where it seems to be impossible to build up anything.

The spectacular scene of Mt Kyaiktiyo is bound to take your breath away. The most ideal time for visiting is from November to March of the following year because it is easy to catch the sight of thousands of the faithful gathering here to pay their respect to the Buddha. If you come here in the rainy season (from June to October), the whole place is coated in the foggy cloud.

There are more than 3,000 temples and pagodas all over this plain. They were built during the golden age of Buddhism which lasted from the middle of the 11th century until the end of 13th century.

Most temples here have the remains of enormous bas-relief. Some of them, typically the wonderful Anando Pahto temple, are still normally operated. Watching the sunset in the fantastic haze of this land is an unforgettable experience.

This pilgrimage site is located deep in the most remote area of the West of Myanmar – Rakhine. The religion architectures here look like the forts due to their thick and hard walls. It is noteworthy that this is the least crowded of all.

The bas-reliefs here were carved into rocks in the 15th and 16th centuries. Time ruins some of the architectures, but most of them still remain unaffected. There was a time that this place was the center of Rakhine and one of the richest cities of Asia thanks to its trade with Spain, Portugal, and the Middle East countries.

A thing to keep in mind is that you should thoroughly check the security circumstance before coming here because some riots broke here in 2012. Despite that notorious fact, Bagan and Mrauk U are still on many visitors’ bucket list. Hiring a carriage for only $15 is such a good deal considering the fact that carriage drivers usually know this place like the back of their hands.

Today, Bago is not the same as it was in the past. It was once the center of the South of Myanmar and the home to an abundance of most important temples and monasteries. This is also the location of the famed reclining Buddha – Shwethalyaung which was carved in the 10th century.

What’s more? In Kya kha Wain Kyaung – one of the biggest Buddhist monasteries of Myanmar, you will have chance to see the scene of more than 500 monks seeking for alms every morning. Another interesting spot is the Snake Monastery which was built 120 ago. Pay a visit to this special place and discover many species of local pythons.