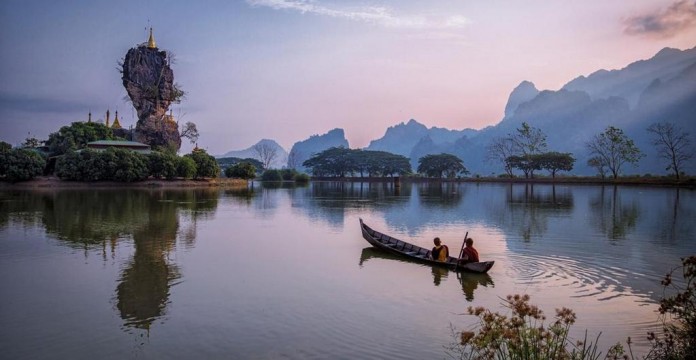 Resplendent ancient temples and golden pagodas, devout nuns and monks, tranquil lakes and rivers, ornamented hillside tribes, colorful markets — this is the essence of Burma. As an adventurous world traveler and photographer, I was in search of the most sublime, pristine cultures on the planet, which led me to this intriguing country.

From the moment I first set foot in this magical land, I fell under its spell.

I found it to be one of the most enthralling countries I have had the privilege to explore — truly a photographer’s paradise. I aspired to capture the soul of the beautiful Burmese people, their mystical cultures and mysterious customs, in the most artistic way possible.

The spectacular visage of the Shwedagon Pagoda and its 60 tons of gold, capped with a 76 ­carat diamond, took my breath away. From a hot air balloon, I was astounded by the stunning view of Bagan’s more than 2,200 temples and stupas peering through the many layers of mist.

The site is quite extraordinary; the surrounding land is very dry and flat, with farmer’s smoke and mist billowing over rice, bean, and sesame fields as far as the eye can see.

The Intha fishermen on Inle Lake reminded me of a choreographed ballet, deftly balancing as they rowed their boats by wrapping one leg around an oar, leaving both hands free to cast their nets. With its teak pillars projecting into the vibrant red orange sky, sunrise and sunset at the U Bein Bridge on Taung Tha Man Lake seemed surreal.

I discovered that there is so much more to Burma than the visitor’s typical circuit. I engaged with many of the 135 tribes and found each one to have its own characteristic rituals, language and dress. I climbed rugged trails through the dense green forests of the Shan State to reach the village of the Akha, where farmers tended their rice fields.

I saw the Sea Gypsies in the Andaman Sea flying in the air to spear their daily meal of fish and the colorful onion farmers on the Chindwin River who looked like an impressionistic painting in the rural landscape.

I learned that the Chin tribe tattoo their faces as it is believed this will disfigure their beauty and prevent them from being kidnapped, while the Naga warriors decorate themselves with powerful headgear to express their fierceness. One could spend a lifetime seeking out the various tribes and photographing their decorated bodies.

There were also innumerable visits to distant temples and monasteries filled with beautifully sculpted statues. I heard the pink-­robed nuns chanting as if angels were singing and contributed to the monks during their daily processional to collect donations and offerings. I rode on the rickety trains, which was always a daunting task.

I explored a 500 million­-year-­old cave in the far eastern Kayin State, which felt like a Jules Verne journey to the center of the earth. Each venture was a memorable experience, both culturally and spiritually.

Burma harkens back to a bygone era.

Although it has been isolated and untouched for many years, the Burmese people still experience the joy of “being” and are not yet caught up in the material trappings of the modern world.

They are generous, compassionate, humorous and resilient. I’ve been to this country many times, but feel I have just scratched the surface in discovering its tantalizing treasures and myriad of peoples. It weaves its way into your soul and touches your heart upon each visit.

I discovered a country, its people and their customs, so intoxicatingly genuine. Burma is one of the few countries in the world which still faithfully retains its national dress, consisting of colorful longyis (an ankle-­length, wrap­-around sarong) made from gorgeous woven textiles, worn by both men and women.

Smoke can be seen wafting in and out of bamboo huts as women with unusual head wraps puff on cheroot (a large corn leaf filled with tobacco, tamarind, honey and palm leaf bud), while chatting about their daily lives. Betel nut chewing is a widely popular habit of the locals, as evidenced by their red­-stained teeth.

Burma is a phenomenon all its own. There are so many historical sites and fascinating places of interest that they are too numerous to mention. It is my hope that these photographs will inspire you and help you to develop an appreciation for this wonderful country.

Whether you immerse yourself in its thousand year old temples, are riveted by the omnipresent monks gracefully gliding in and out of the monasteries and markets or are delighted by the smiling faces of women and children and their thanaka­-brushed faces, you will truly find yourself mesmerized by the marvels of Burma.