Coffee, injera, famine. Honestly, those are often the first things people think of when someone mentions “Ethiopia,” right? Fortunately, a broader picture is emerging now that the African nation of 90 million is preparing for its coming-out party. 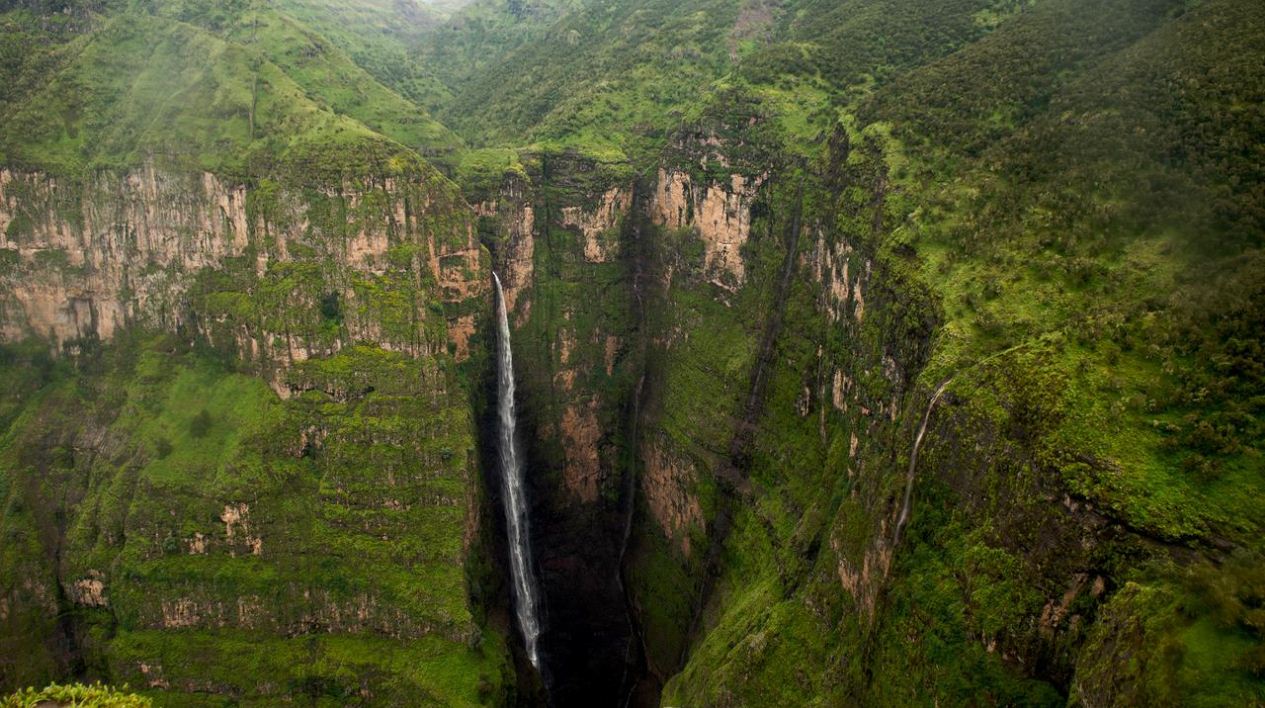 Not all of its problems are past. Droughts will always be a an issue, for instance. But the economy is up. And for visitors, food is wonderful, honey is made into wine, history is Biblical in scale (literally) and thrilling new discoveries are a constant. One is Yeha, a village in the north that it turns out was set over one of the world’s biggest ancient structures that’s still under excavation. (It’s not recognized by UNESCO. Not yet.)

And that’s the point. Many equate Africa travel as either culture (generally the north and west) or animals (the east or south). Ethiopia — roughly between Egypt and Kenya — has both.

Here are seven things everyone should know about Ethiopia.

Going to Ethiopia is kind of going home, as archaeological digs increasingly link this area with the birth of humans between two and three million years ago.

Previously one of the most famous is the 3.2-million-year-old “Lucy,” an ape-like Australopithecus afarensis, which is believed to be an ancient forerunner to homo sapiens. Named for the Beatles song “Lucy in the Sky with Diamonds,” she stood just over 3ft (36 in) tall. You can see her at Addis Ababa’s National Museum of Ethiopia, along the somehow less-heralded “Ardi,” a forerunner of Lucy’s who’s actually a million years older.

And Ethiopia’s role in our ever-changing history continues to become clearer. In 2015, a 2.8-million-year-old jaw was found in northeast Ethiopia, believed to mark an important gap as hominids like Lucy transitioned to blokes like us.

2. Raiders of the Lost Ark should have been filmed here

If you’re Harrison Ford, consider wearing a disguise here. Not many Ethiopians — nearly half of whom are Orthodox Christians — are fans of The Raiders of the Lost Ark. One Axum local explained it’s about the keepsake of the Ten Commandments: “The movie says that the ark is in Egypt. It’s not. Everyone knows it’s here.”

Axum is a historic town thats heyday from 400 BC to 400 AD still weighs heavily on the modern Ethiopian conscience. It’s a popular destination for its ancient stelae and tombs that can be visited in a rewarding day or two. The main site is across from the Church of Our Lady Mary of Zion that dates only to the 1950s. You can’t go in. Only one person, who lives permanently in the church as caretaker, can go to its deepest chambers where — it’s said with certainty here — the ark resides.

If it’s there — and skeptics note the earliest known record that it came here is the local 14th-century text, Kebra Nagast — the ark was definitely victim of a raider or two. According to the text, the supposed son of King Solomon and the Queen of Sheba (Menelek I) seized it in Jerusalem in the 1st millennium BC and brought it to Ethiopia, where it’s been held in various locations.

You can only photograph the church from the outside, but just about every Ethiopian church has a copy of the ark, covered in blankets.

Speaking of stories, the legend of King Solomon’s vast stashes of gold has prompted a fair share of bad films and foolhardy explorers. Most target Ethiopia in their futile chase.

One recent example is Tahir Shah who recently based a book’s worth of lighthearted adventure on an offhand purchase of an old map at a Jerusalem souvenir shop. He writes in his book In Search of King Solomon’s Mines of happening upon a salt caravan from whom he learns how gold used to be cut from the ground in slabs.

He didn’t notice how suspiciously similar that is to how the caravan’s rock salt bars (called amolés) have been cut since the Old Testament days. These slabs were long used as money (most recently in the 1960s). You can see them cut still in the Danakil Depression, where you can buy one for 4 birr (about USD $0.20).

Shah was looking for gold. He should have followed the salt.

Whether or not they are Solomon’s “mines” or not, you can visit these historic salt plains that extend like white crusty oceans to the horizon. They’re at Dallol in the Afar region’s Danakil Depression.

The walled town of Harar, a UNESCO World Heritage site 371km (231 mi) east of the capital Addis Ababa, is a historic place with dozens of mosques and hundreds of alleys to get lost in. But watch your step. It’s famous for being the “town of hyenas.” A special hyena gate even allows the critters access into town. Locals believe if they’re kept fed (as they are every night), they’ll stay away from kids. And they have.

Marcus Baynes-Rock’s recent Among the Bone Eaters recounts his experiences bonding with the hyenas here, and a museum in town is devoted to the doomed French poet Arthur Rimbaud, who lived in “beloved Harar” in the late 19th century.

5. It has the hottest, lowest populated place on Earth

Forget Death Valley. The Danakil Depression is the hottest, lowest inhabited place on Earth. Temperatures reach 51°C (125 °F) in summer. There is no electricity or running water almost anywhere. And, yes, a well-named people live there, the Afar.

Hearty visitors to the Danakil, which sinks to 189m (620 ft) below sea level, can witness the stunning Irta’Ale volcano, which has been erupting since 1967. Reaching it requires a rough 27km (17 mi) round trip hike at night that includes a short sleep in a lava-stone hut at the crater’s edge before returning. The last of the climb cuts across hardened lava that crackles under your foot as you reach the bubbling molten lava and toxic fumes. I’ve done it. It’s amazing.

Visits can be arranged from Mekele, Addis Ababa or Axum, and also include the salt caravans near Dallol. Before going, ask a lot of questions about safety and supplies, ensure you have enough water, and pack your own first-aid kit and torch lights.

6. There are lots of mountains, too

Though “Ethiopia” is actually Greek for “burnt face,” the country’s not all hot and sunken. In fact, many visitors leave shocked most about how mountainous it is. At more than 2,133m (7,000 ft), Addis Ababa is one of the world’s highest capitals. The Gheralta mountains of the Tigray region look like kin to the peaks of the American southwest. Southeast of Axum, the road hugs a Grand Canyon-like formation passing monasteries atop isolated rocky towers in the distance.

The most popular area, though, is Simien Mountains National Park, a couple hours south of Axum. The Word Heritage site rises to nearly 4,572m (15,000 ft), and is home to wildlife like gelada monkeys, ibex, jackals, klipspringer, leopards and the rare Ethiopian wolf.

I found myself saying “I had no idea… ” when in Ethiopia almost daily, and the site that brought these words out the most is Lalibela, a former capital from the 12th and 13th centuries that was built to be the new Jerusalem.

It’s famed for its 11 rock-hewn churches carved below ground out of solid tufa limestone. (The Tigray region to the north has more than 120 such churches.) Lalibela remains an unreal achievement. The highlight is standing above the crater surrounding Bet Giyorgis (Church of St George), its roof designed as a Greek cross. A hidden dug-out path curls down to the church. Fun.

A 90-minute drive away, Yemrehanna Kristos is a rock-hewn church built eerily into a cave. It’s even older than Lalibela’s. Monkeys roam the gate, and behind is a pile of dozens of stacked mummified pilgrims who came to the site to die.

As of yet, few go out there. Meaning more monkeys and mummies for you.