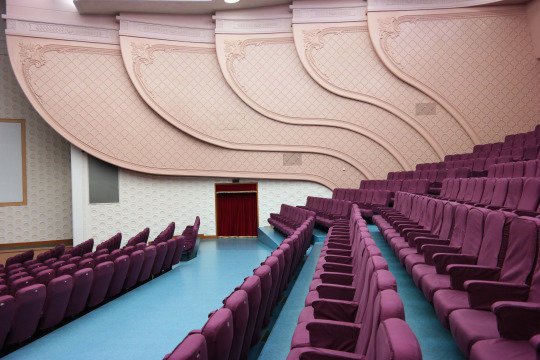 Is it a movie set? Is it a model home? No, it’s North Korea.

When London-based architecture critic Oliver Wainwright visited North Korea over the summer, he was stunned by the symmetry and color inside some the buildings he toured. Whether a sports complex, children’s nursery or office building, the sites he visited were color-coded and neatly arranged. In a piece he wrote for the Guardian, Wainwright even likened these interiors to a Wes Anderson film set.

Symmetry is one of the guiding principles of “Juche” architecture, which is inspired by a political philosophy of the same name. It uses design elements to exaggerate the perspective of statues and portraits of North Korean leaders and instill a sense of awe in the viewer, Wainwright told The WorldPost in an email. North Korea is so committed to Juche architecture that late leader Kim Jong Il wrote a 340-page treatise on it, named “On the Art of Architecture“.

“It’s a very theatrical device, which is why I think so many North Korean spaces feel like stage sets — they’re designed to evoke an emotional response, usually one of monumental power of the leader, compared to the insignificance of the masses”, Wainwright said of the style.

But many of these interiors may vanish soon. In a quest to present North Korea as a modern nation, the government is undergoing a massive effort to construct more contemporary buildings in its capital city of Pyongyang, Wainwright wrote in a Sept. 11 article for The Guardian. Later that month, the Hermit Kingdom unveiled an impressively state-of-the-art airport and leader Kim Jong Un has reportedly ordered that some buildings replace their floors with more “modern” materials like vinyl and granite, Wainwright explained.

Take a look at Wainwright’s photos of North Korean interiors and marvel: