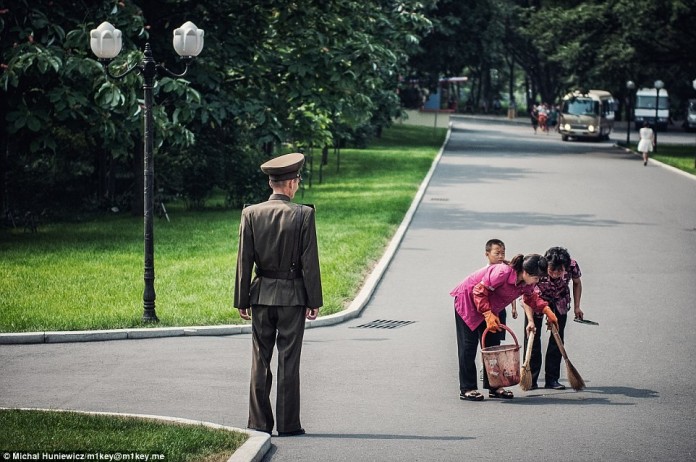 A daring photographer has risked detention to smuggle a series of stunning images of North Korea out of the secretive state.

Michal Huniewicz captured the photographs he knew Kim Jong-un would not want you to see during a trip to the country, before sneaking them out on hidden memory cards.

Unlike the polished photographs peddled by the state-run news agency, Mr Huniewicz’s images give a raw insight into a poverty-ridden country controlled by a dictator.
He went to North Korea from China last year and travelled with a tour guide – one of the conditions of being allowed a visit.

Mr Huniewicz evaded his minder’s watchful eye to take these photographs, which give a unique glimpse into North Koreans’ everyday lives.

In one image, street cleaners sweep pavements under the watchful eye of a soldier in one of Pyongyang’s parks, and others reveal waitresses working in restaurants where propaganda images are broadcast around the clock on television.

A photograph of a customs form reveals what cannot be brought into the country. Mr Huniewicz revealed laptops are searched for the Hollywood film The Interview, a comedy about Kim Jong-un, which is banned in North Korea.