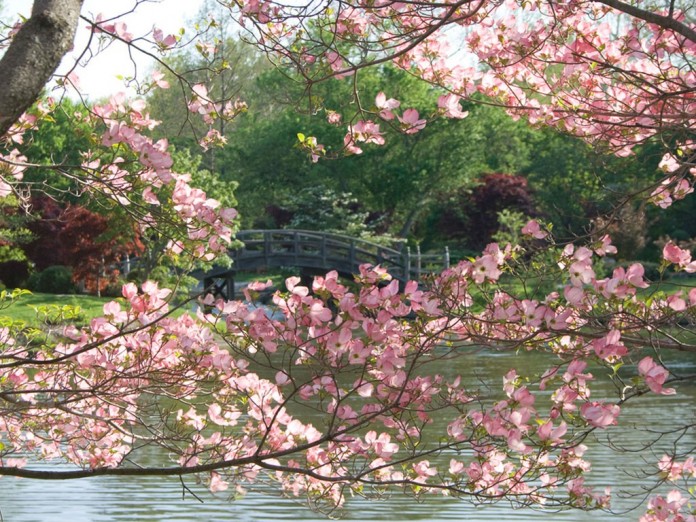 Cherry blossoms, vanilla orchids, cacti, a pumpkin village and 3,000 exotic butterflies are just a few unique attractions featured at our favorite botanical gardens in the US.

From its summer music fest to its holiday flower and train shows, the Missouri botanical garden in St. Louis hosts many annual events. But the garden easily stands on its own, with 79 acres of beautiful displays that include a 14-acre Japanese garden, garden founder Henry Shaw’s original 1850 estate home, and one of the world’s largest collections of rare and andangered orchilds.

Southern charm abounds at the Lewis Ginter botanical garden in Richmond, VA. Its stunning classical domed conservatory houses an orchild collection, as well as an annual butterfly exhibit (Memorial Day weekend throught mid-October). A giant accessible tree house is part of the garden’s interactive children’s area. And in the winter, the garden dazzles with an annual display of more half a million lights.

Large greenhouses make visiting Franklin Park Conservatory and botanical gardens in Columbus, OH, easy year-round. The conservatory houses more than 400 species of plants in environments that include desert and rain-forest habitats. Seasonal displays of blooms, from colorful bulbs to varieties of conifers and grasses, span the outdoor gardens. There is also a unique glassblowing pavilion for demos and classes.

You’ll quickly dispel any notion of a lifeless and colorless desert landscape when visiting the Desert botanical garden in Phoenix. With a distinct mission of focusing solely on desert plants, the garden’s 145 acres showcase more than 50,000 plants, including a unique collection of cacti. The garden is great to explore year-round, but spring is especially popular for the annual butterfly exhibit and wildflower blooms.

Located in Albuquerque, NM, on the banks of the Rio Grande, the ABQ BioPark Botanic Garden has 36 acres of gardens to explore along more than 1 1/2 miles of paths. Two popular exhibits are the Japanese garden, which was designed by noted landscape architect Toru Tanaka, and the children’s garden, which is guarded by a 14-foot topiary dragon. The BioPark also includes a zoo and aquarium.

One of the oldest botanical gardens in North America, the United States Botanic Garden was established by Congress in 1820. Located adjacent to the Capitol, this small garden packs a big punch. A conservatory and 2 outdoor areas display a collection of some 65,000 plants, including rare finds such as ferns that date nearly as far back as the garden’s founding. Like at the nearby Smithsonian museums, admission is free.

It’s all about the San Francisco botanical garden’s magnolias from mid-January through March. During this time, nearly 100 rare magnolias erupt in vibrant pink and white flowers. If you miss the magnolias, you can still feast your eyes on a towering redwood grove and rare cloud forest plants. The garden is located in Golden Gate Park, which is also home to a Japanese garden and flower conservatory.

Take a 600-foot-long canopy walk among the branches of oaks, hickories and poplars while looking down on native azaleas, camellias, hydrangeas, perennials and bulbs. That’s just one of the fantastic ways to experience the Atlanta botanical garden. There is also an orchid center, which has the largest collection of orchid species on permanent display in the US; a garden pond filled with aquatic plants; and a children’s garden with fountains, sculptures and fun exhibits on botany and ecology.

You’ll find this 250-acre oasis in the middle of the Big Apple. The New York botanical garden’s historic, Victorian-style glass house provides a world tour of 11 distinct plant habitats, including a tropical rain forest and desert environments of the Americas and Africa. Two of the garden’s major events are its spring orchid exhibit and its winter train show.

Spanning 26 gardens and 4 natural areas, the Chicago Botanic Garden draws about a million people annually. At nearly 400 acres, it is one of the largest botanical gardens in the US. And its collection of 185 bonsai is one of the best public displays of the miniature masterpieces, with works by bonsai master Susumu Nakamura. Considered a living museum, the garden also does groundbreaking plant conservation research.

Southern Florida’s climate makes for year-round growing at the Fairchild Tropical Botanic Garden near Miami. Among its gems are rare exotic fruit species, including mangosteens, cacao and vanilla orchids. The 83-acre garden also has a butterfly conservatory that showcases almost 3,000 exotic butterflies. Visitors can watch them hatch and be released into the conservatory.

Dallas is known as the city that does it big, and the Dallas Arboretum and botanical barden doesn’t hold back. Its spring flower fest is the largest in the Southwest, featuring more than 500,000 blooms, and in the fall, the garden becomes a pumpkin village, with over 50,000 pumpkins, gourds and squash. The 8-acre children’s area includes more than 150 interactive games and a 20-foot-high waterfall.

Boston itinerary 4 days — How to spend 4 days in Boston & what to do in Boston for 4 days for first-timers?