Poland has never been a popular tourist destination. But in recent years the number of visitors has increased rapidly. Who could not help but fall in love with the magnificent medieval works and buildings, the quaint and beautiful cities, the splendid old towns – the symbols of a history full of ups and downs? Traveling to Poland, just visit the capital Warsaw is not enough. Remember the hidden gem of Gdansk too! Today, I will share with you all my experiences I got during my trip to one of the most Polish famous destinations — Gdansk. So, what to do in Gdansk and how to plan a perfect budget trip to Gdansk for the first-time? Let’s check out our Gdansk travel blog with the fullest Gdansk travel guide (Gdansk guide) from how to get there, best time to come, where to stay, best places to visit and top and best things to do in gdansk as well as suggested Gdansk itinerary 3 days 2 nights to find out the answer!

Gdansk is a rather small port city located in the Northern Poland. This is the birthplace of the world’s first self-determination movement against the Soviet Communist regime. If you love history and culture, you should definitely not miss this city. I must say that I love this city the most in Poland. It’s even one of my favorite cities in Europe!

Gdansk is known as a beautiful port city located on the Baltic Sea coast. This place was once the first place of Poland where broke out the World War II and the Solidarity movement (The Independent Self-Governing Trade Union “Solidarity”) contributed to successfully overthrowing communism. Therefore, the modern port city of Gdansk today is often known to tourists as a symbol of a city of freedom and is also considered one of the most famous Polish tourist cities today.

Gdańsk is the main port of Poland and it has had a complicated historical period when it was invaded by many foreign powers. After the decline of the Polish royal family, this place was once occupied by the Austrians, Prussians (present-day Germans) and Russia and disappeared from the world political map for more than a century.

In the early 20th century, this place was freed by Germany, but World War II once again turned Gdansk into a fierce battlefield. It was one of the most devastated cities in Europe at that time. All houses and streets were destroyed to 90% and it took several decades for the Poles to restore them. When I went to see it, I admired the Polish people’s national pride and their will and efforts.

Gdansk, Poland is located right on the coast of the Baltic Sea, so traveling from here to Nordic countries or other Baltic countries is quite convenient. You can take a ferry from Gdánsk to Stockholm, Copenhagen… all are Okay.

Gdansk guide: How to get to Gdansk?

Gdansk has an airport. The airport’s name is Lech Walesa (GDN), named after the leader of Gdansk’s Solidarity (Polish Trade Union). Gdansk Airport is an international airport, quite modern and large, it is easy to find flights here, you can use Google Flights or Skyscanner to search suitable flights. I recommend the low-cost airline Ryanair. You can fly to Gdansk from Denmark, Sweden, Norway, Greece, Ireland, Italy, the UK, Spain, Israel, and even from the island of Malta! I flew here from Stockholm. Ticket is only about 10 euros/way. But I have to fly from Stockholm Skavsta Airport, so I had paid about 30 euros.

Getting from Gdansk airport to the city center is also very cheap and simple with direct buses. You just need to go out, take bus 210 of ZTM and go straight to Gdańsk Main Station (Gdańsk Główny). The direction of the bus is GOSCINNA direction. This bus runs every 30 minutes. On weekends, one trip every hour. The fare is 3zl (less than 1 euro). Bus tickets can be purchased at ticket vending machines at the bus stop. 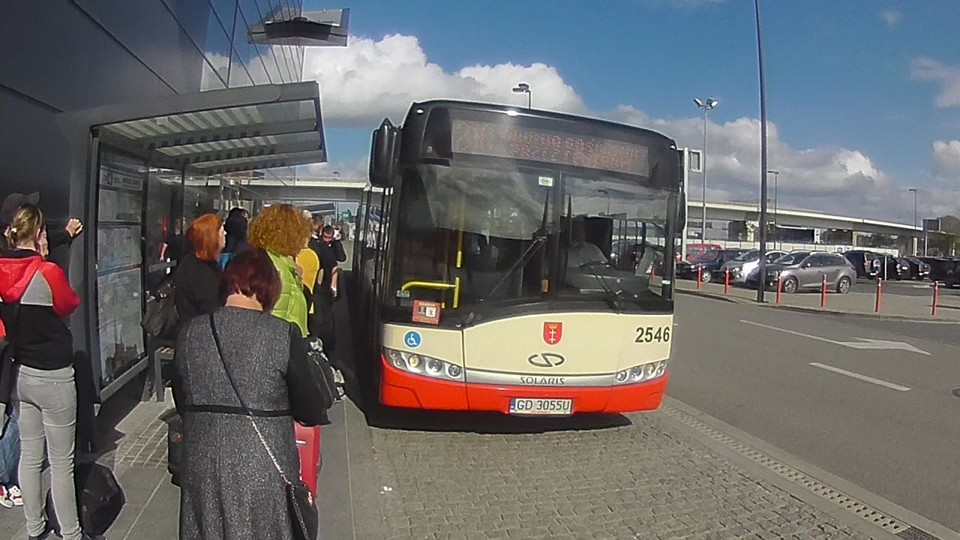 Train is also an easy and cheap option if you depart from other Polish cities. This is the homepage of the Polish railway system. You can easily check the railway routes and schedules.

There are very efficient bus companies that run to Gdansk, my favorite one is Flixbus (very familiar with people who often travel in Europe) and Polski bus. Polski bus is a Polish company, running on time and efficiently.

Gdansk travel guide: Getting around Gdansk

You can buy tickets at the ticket vending machines/kiosks or buy directly on the bus. Note that you should only buy directly when you have the right amount for the driver. They rarely have enough cash to give you back. Remember to stamp your ticket when you get on the bus.

Gdansk travel guide: Where to stay in Gdansk?

During my travel, I stayed at W Kamienicy’s apartment (Agoda.com or Booking.com) for €30/night/ 2 people. I booked this room through Booking.com. I thought it was a hotel, but then I found out that it was the house of a Polish man. This guy is very kind and enthusiastic. The house is decorated very cute, comfortable and located right in the old town. This guy let us feel comfortable, so he wasn’t here for a few days when we were there. In general, renting a room is like renting an entire apartment. Not only that, the house is located right in the old town, so it is very convenient to travel, right below the house there are many restaurants. This is by far one of my favorite places to stay!

Or you can consider to stay at La Guitarra Hostel Gdansk (Agoda.com or Booking.com).

Check out more top and best hotels in Gdansk on Agoda.com or Booking.com.

Old Town is one of the most famous and must visit tourist attractions. This place was carefully reconstructed after being flattened in World War II and has many similarities with other old towns in cities such as Amsterdam, Brugges, Riga… The old town is really beautiful and impressive with brilliant red tile roofs of colorful houses and buildings. This is probably one of the 3 old towns in Europe that I feel most excited about. 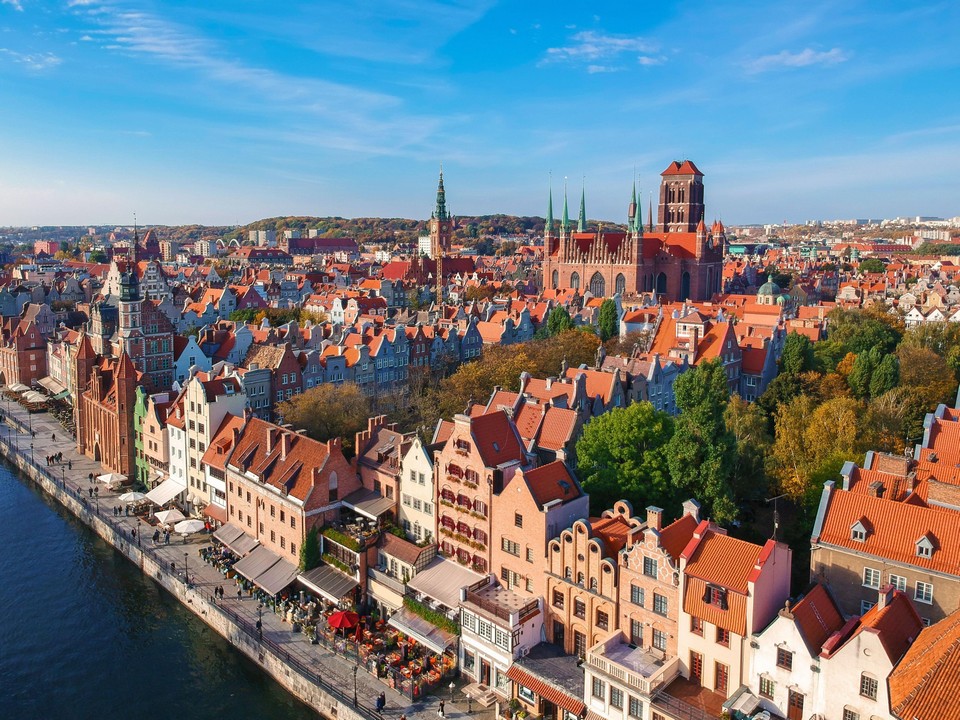 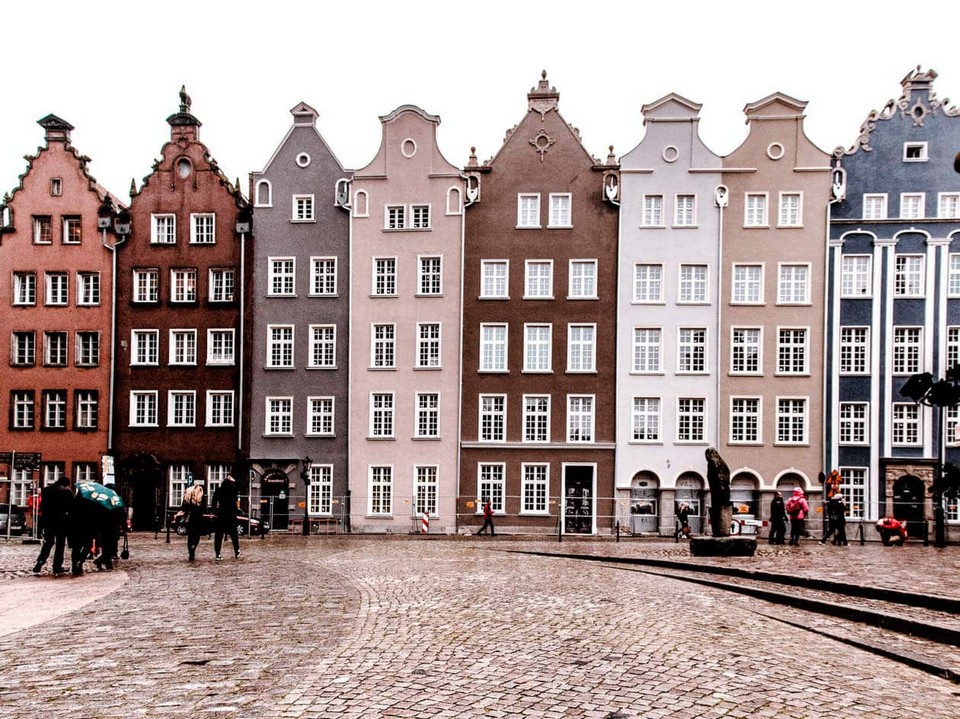 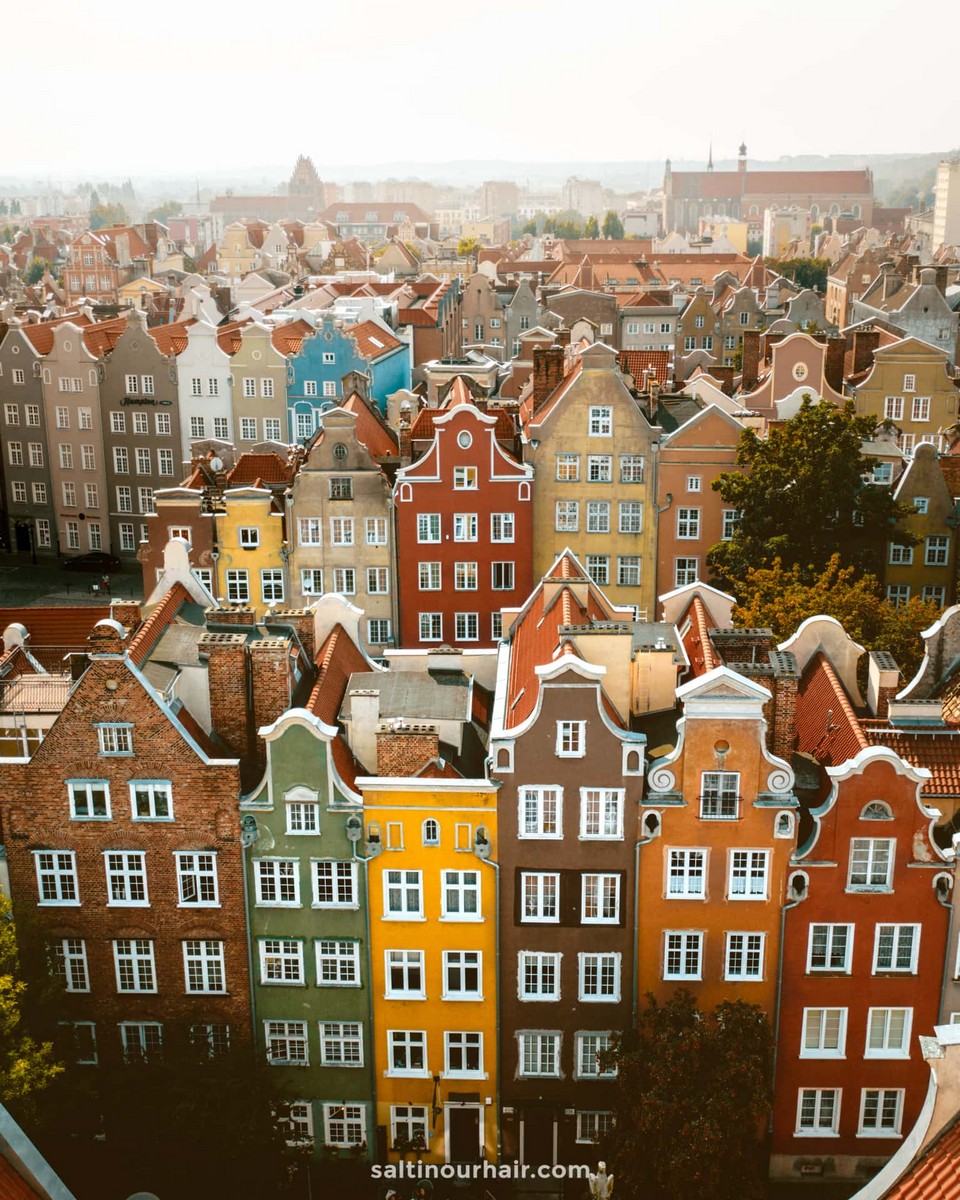 During World War II, Hitler began to rampage and decided to raze the old town of Gdansk. Many unique architectural works with Gothic, Baroque, and Renaissance styles were completely destroyed during the war.

Only 37 buildings remained, but not so that the Poles were discouraged when they decided to rebuild the old town after the war. They learn and offer a lot of restoration methods to rebuild this old town. Even the study of 14th century building materials and reuse of bricks and stones from medieval constructions elsewhere to bring back here and rebuild buildings and houses in Gdansk. 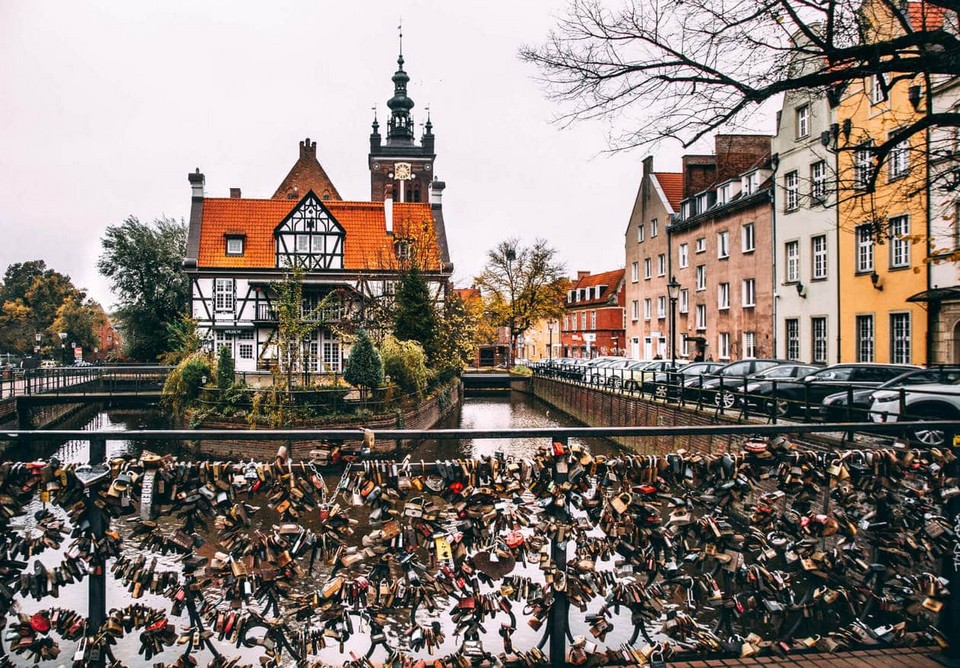 The main street of the old town is Dluga Street. This is also the area with the busiest cultural and commercial activities in the city. Because of the history of trade with many countries such as Germany and Flamand (originating of the Netherlands and Belgium today), it is not difficult to realize that the architecture here is also partly influenced by these countries. Most of the buildings here have also been restored in the 20th century and are modeled after the 18th century. 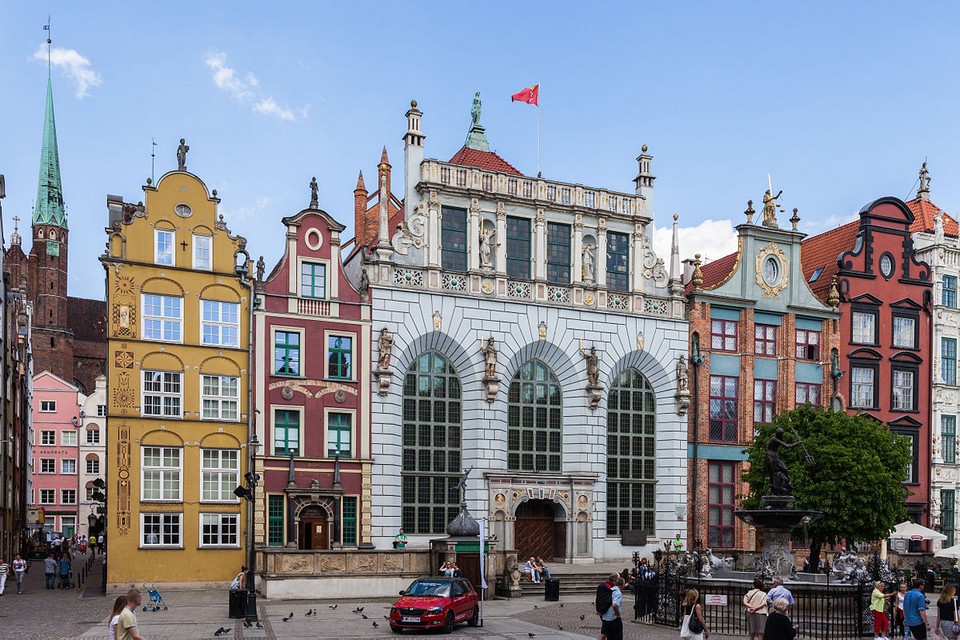 Gdansk’s history is associated with amber because the city thrived on the export of this luxury item throughout Europe. And the Mariacka road is a clear example of that period of great prosperity in Gdansk.

Along both sides of the street are many souvenir shops specializing in amber related items. The architecture of the buildings along the two sides of the road is also characteristic of the city with awnings that jut out into the street and are decorated very gracefully. So gentle!!

St. Mary’s Church (Basilica of St. Mary of the Assumption of the Blessed Virgin Mary in Gdańsk)

The construction of the Gothic St Mary’s Church began in the 14th century but was not completed until 140 years later. This tourist attraction is one of the largest brick churches in the world with a capacity of up to 25,000 people. Although it is massive, the interior is decorated quite simply. The church has 31 chapels, more than 30 large windows and an astronomical clock.

In the port area, the Artus Court building with the Neptune fountain is considered the second symbol of Gdansk. This famous tourist place is the most concrete proof of the port city’s heroic past.

The Artus Court building was built as a symbol of the unity of businessmen in the busy trading period of the city. In addition, the Artus Court also acts as a seat of economic law and a place to protect the interests of trade associations. The building was also completely destroyed by the Nazis after a bombing during World War II. And it was not until 1970 that this famous tourist attraction was restored based on the original old version. Today, the Art Court building is not open to visitors but only serves as a place to receive heads of states. 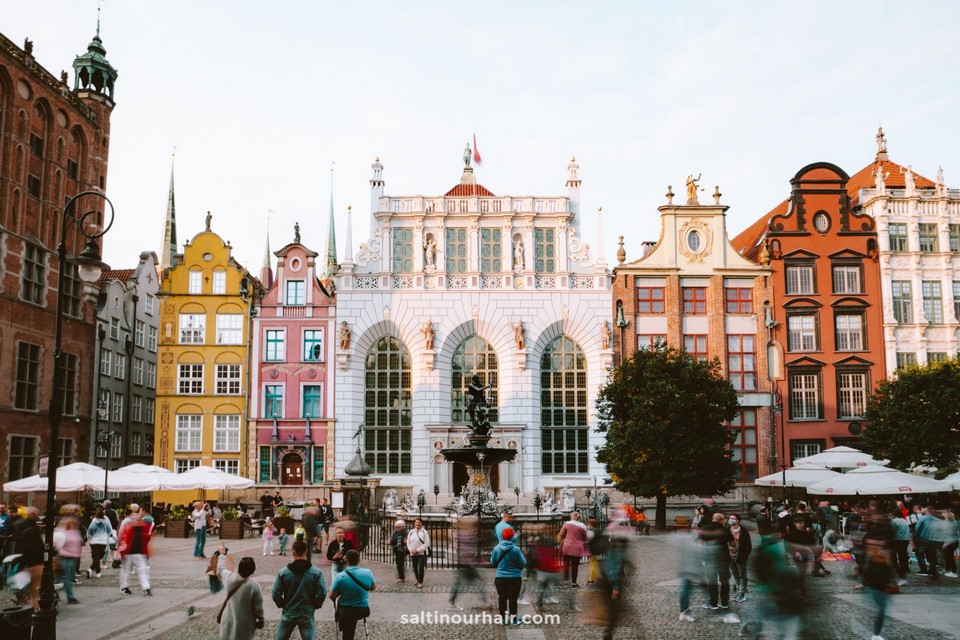 Don’t just visit Gdansk only! My motto has always been to go less with quality instead of always moving between cities. If you have taken a trip to Gdansk, you should spend half a day to visit the world’s largest brick medieval castle, Malbork. 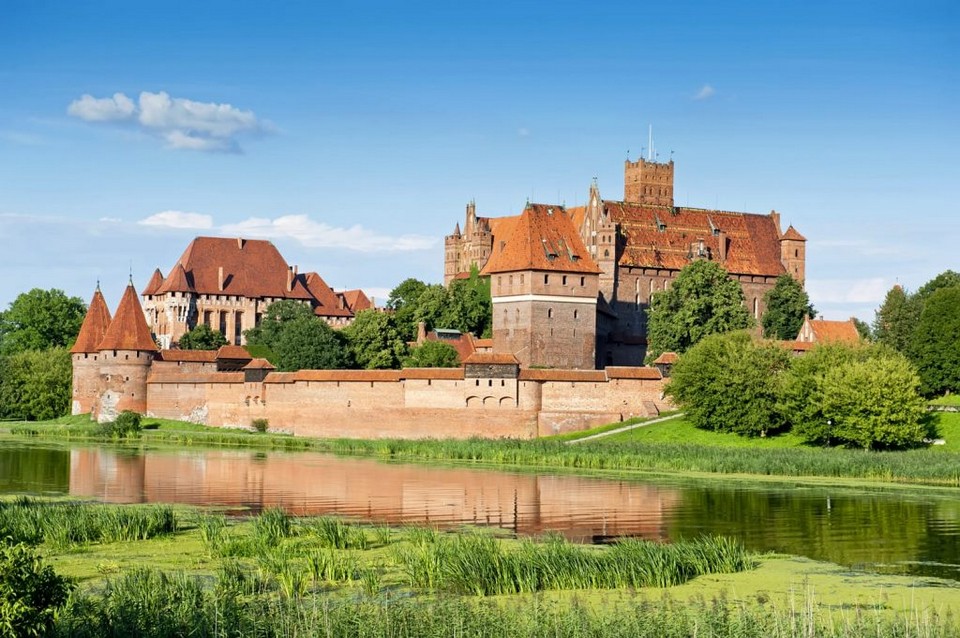 Malbork Castle was built in the 13th century, is a trench of the Teuton Knights (Teutonic Order) – the Catholic Church of Germany. Later it became the Polish royal palace. During the Prussian dynasty, Malbork became a refuge for the people. The latter was heavily destroyed during World War II. It is now a popular UNESCO heritage site in Poland.

Malbork is about 45 minutes by train from Gdansk. Malbork Castle was recognized by UNESCO as a world cultural heritage in 1997 as the largest Gothic brick building in the world. This castle was built in the 12th century – typical of a medieval fortress.

For me personally, self-sufficient travel to Gdansk needs about 2 full days is enough. If you still have time, visit Malbork Castle – 45 minutes by train from Gdansk. 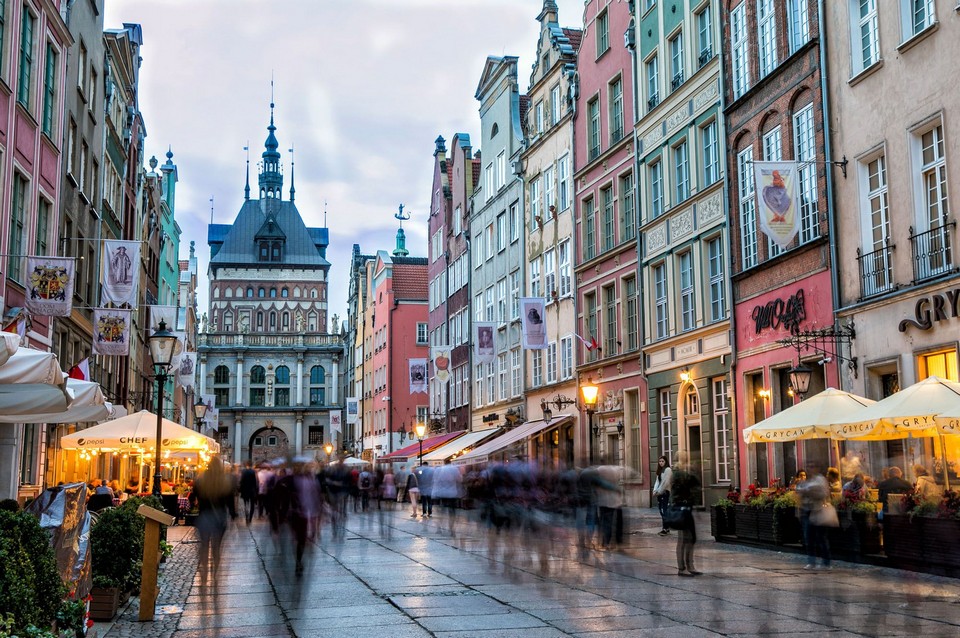 Gdansk travel guide: What and where to eat in Gdansk

Gdansk has a fairly large Forum shopping mall located right opposite the old town. It offers a lot of food from Polish traditional cuisine to Asian cuisine or fast food. The price is also around €5 and you already have a pretty good meal.

In addition, most of the streets in the old town have a lot of restaurants. Please look at the menus outside first and then choose which restaurant is crowded to enter. The day I went, I ate at Seafood Station Restaurant, Bar & Grill and Thai Thai restaurant specializing in Thai dishes in the old town.

Summary of travel costs to Gdansk is really very cheap compared to other countries. Average daily only about €40 is too good. I see a lot of visitors from Germany and Nordic countries like Finland, Sweden, Denmark come here. The price is so cheap, only half or even 1/3 compared to those countries, but traveling is too convenient. 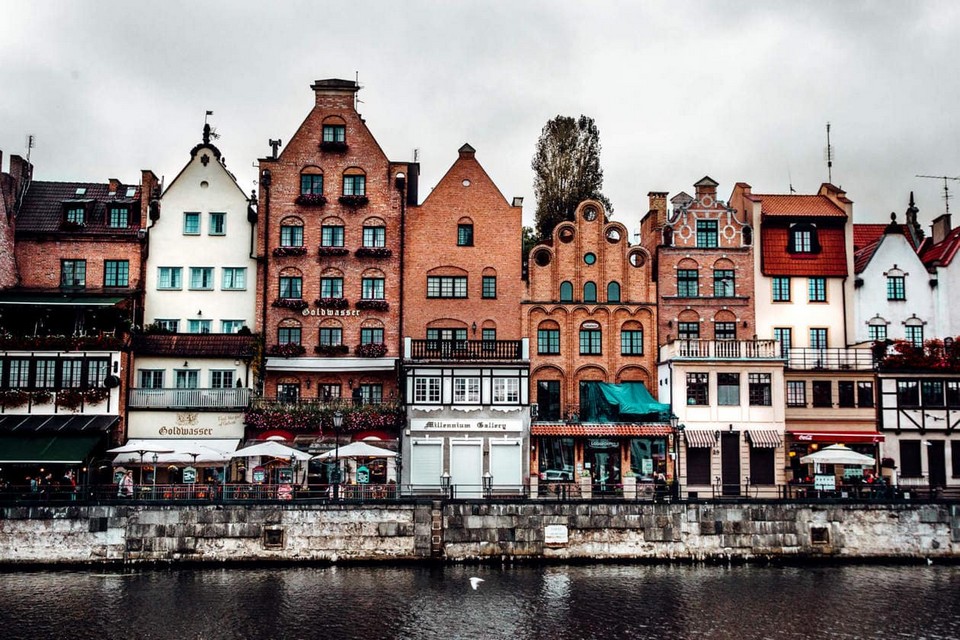 Gdansk guide: Some best day tours, trips, activities and transfer services, tickets in, from and to Gdansk you can refer to 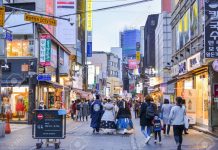 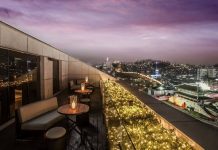