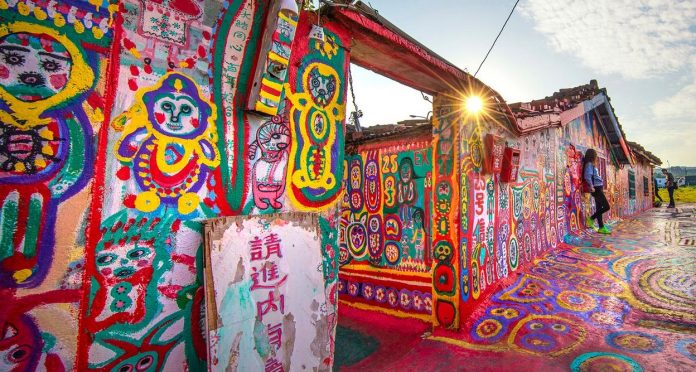 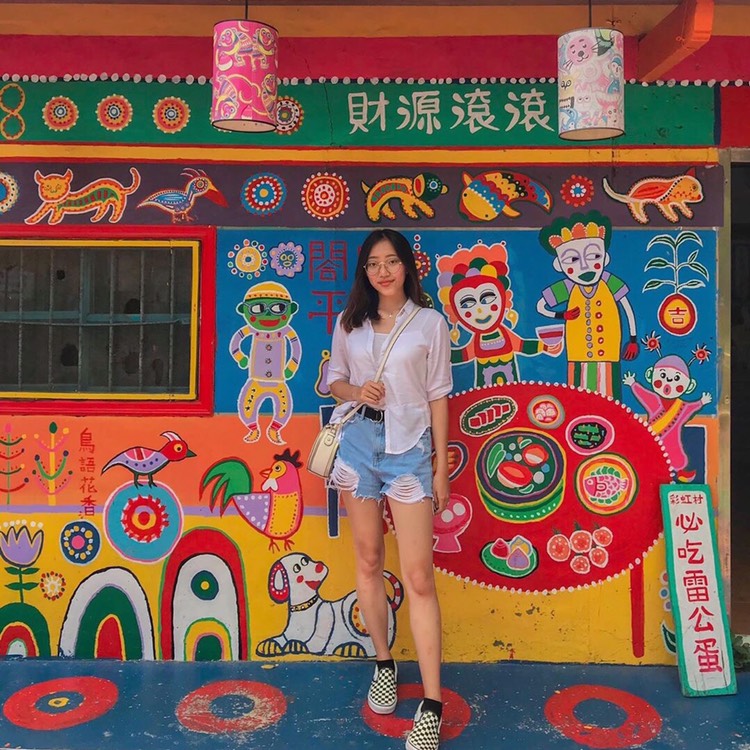 This is a super ideal place for those who love to take virtual live photos too. Coming to the village, you will “be a little shocked” because imagining it is much different from reality. However, you should read the guide document and the history of the village and you will like this place more.

The village welcomes 1 million visitors annually and is the perfect stopover when going from Taipei to Sun Moon Lake or a combination of a rainbow village trip and Gaomei Wetland. 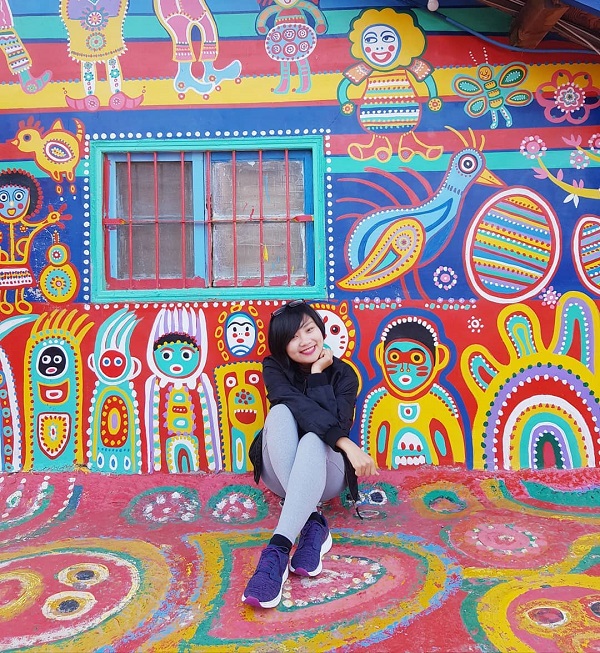 In this article, I will share the experience of visiting Rainbow Village Taichung for those who have not to come yet.

Where is Rainbow Village Taichung?

So, if you want to donate, you can donate money to charity boxes or buy souvenirs that reproduce the colors and images of the village. 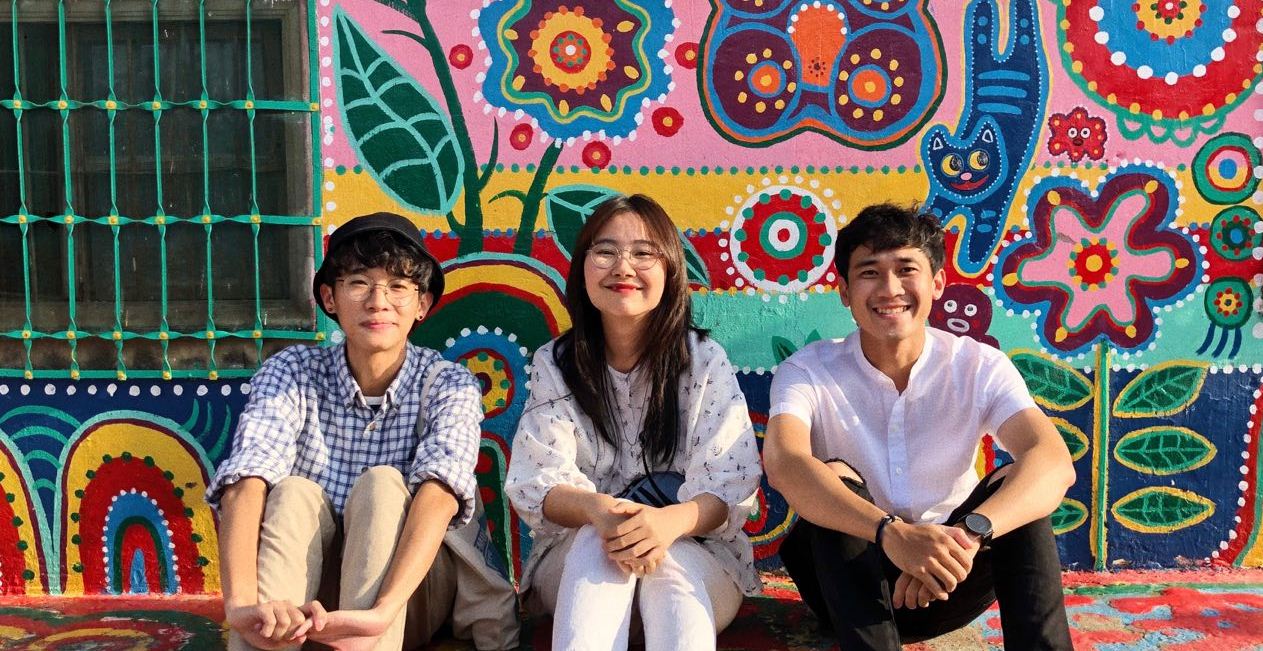 The history of Rainbow Village Taichung

Originally called Caihongjuan village, it consisted of 1,200 low–cost houses built on the edge of the city for veterans. Since Taiwan’s economy prospered, investors wanted to buy back the land and destroy the village, but one of the villagers, Mr. Huang, did not want to leave the village, which was attached to him and his teammates. So he decided to paint the houses with colorful art drawings of people, birds and animals…

Mr. Huang, originally came from Hong Kong, joined the KMT army in 1946, fighting the Communist troops in mainland China during the civil war. In 1949, the Kuomintang was defeated and fled to Taiwan under General Chiang Kai-shek. Soldiers have been provided with temporary housing in hundreds of specialized military villages across the island.

Attempts to save Mr. Huang’s village were discovered by a few local university students. They have mobilized everyone to contribute. The government eventually agreed that it should be preserved and hoped to become a cultural site that attracts tourists. 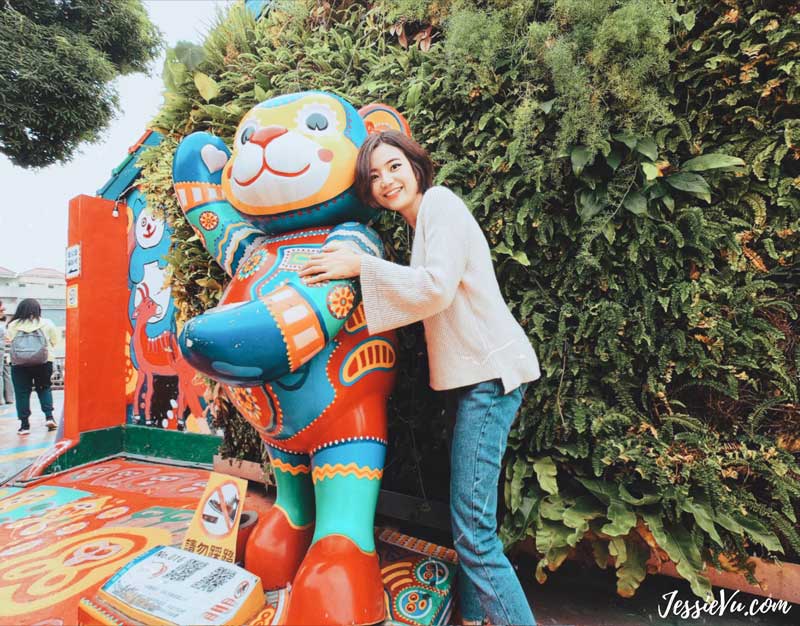 Rainbow Village Taichung how to get there?

Going to Rainbow Village Taichung is not difficult, depending on where you depart. But the most convenient way is to go by taxi (traveling in a group that is both fun and economical). Or you can also go by bus (you have to wait for the bus), or take a tour.

How to go to the village from Taipei?

By HSR: The fastest way to get from Taipei to Taichung is by the Taiwan high-speed railway (THSR). The journey takes about 40 minutes from any major station in Taipei (Taipei Main Station, Banqiao and Nangang station). The HSR train will takes you to Taichung HSR Station. From there, you can consider to choose the 2 ways to get to the village.

Taxi / Uber: From Taichung THSR station to the rainbow village, it takes about NTD150 – NTD200 in 30 minutes.

Bus: Get out of Taichung THSR Station, take the bus number 26 and 70 or bus Zhonglu 99 and 617 from the ground floor of the station or bus no.56 at the adjacent Xinwuri station. On weekends and holidays, bus no.655 , in the direction to the Gaomei Wetland, also leave the Xinwuri Station and stopped right in front of Rainbow Village.

How to get to Rainbow Village Taichung from Taichung?

You can easily take a Taxi or take a Bus to get to the rainbow village.

If departing from Taichung THSR station to Rainbow Village, go as follows:

Bus: Similar getting from Taipei, you can take Taichung bus 26 and 70 or bus Zhonglu 99 and 617. Depart from the bus stop on the ground floor of the Taichung HSR station. Remember to choose the direction to Ling Tung University, otherwise it is wrong. You get off at Nantun Tongan stop (10th stop). Next, you will walk about 240m along lane 19, Zhongyong Road.

Alternatively you can take bus 56 from the adjacent Xinwuri station. On weekends and holidays, bus 655, in the direction to the Gaomei Wetland, also departs from Xinwuri Station and stops right in front of Rainbow Village.

Bus: Take the number 27, 29, 30, 40, remember to choose Ling Tung University direction. The bus will stop at (科技 大學 (嶺 東路)) Lin Tung University for about 60 minutes riding, priced at NT$15. Walk about 400 meters (10 minutes) to the south along Ling Tung Road to see the village on the right. Remember to use the Easy Card to pay because the law in Taiwan is that there is no coin refund on the bus.

You can also take buses #56 and #89; that departing from the north side of Yongchun Road at Ling Tung University. This bus will also reach the National Taiwan Museum of Fine Arts in the city center.

After arriving in Taichung, the first night we went to Fengjia night market. The next day, the first place to visit is this Taichung Rainbow Village. If I do not learn about the village in advance, I would imagine the village is a large village and a fresco village like Tam Thanh Mural village in Vietnam or some mural villages in Korea like Gamcheon. And, if you imagine like that, you will be “shocked” when see the village in reality. Fortunately, I’m not shocked (ahihi).

Why? Because you will be disappointed by saying it is a village, but in fact this place is just a few houses painted with all kinds of unique, colorful shapes.

In fact, before these vivid paintings, the village had 1,200 houses.

The story is that during the Chinese civil war, after Kuomintang (KMT) was defeated in 1949, Chiang Kai-shek packed everything and ran to Taiwan. Many Kuomintang soldiers loyal to him followed. On the island, temporary villages have been built for these veterans and their families to stay temporarily. But over time, they became permanent residences for these veterans (not yet re-granted a new home). 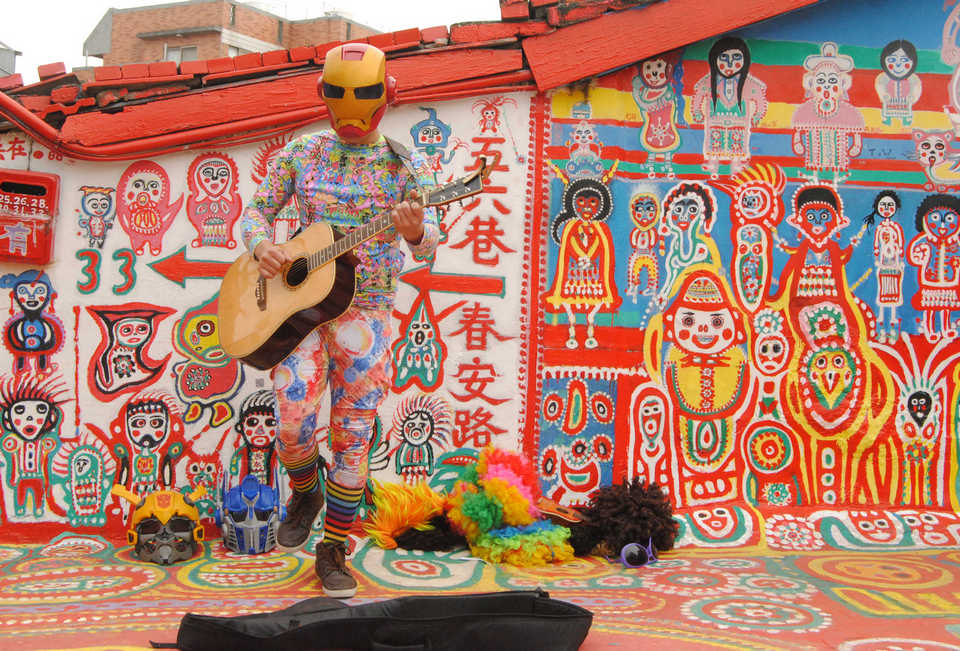 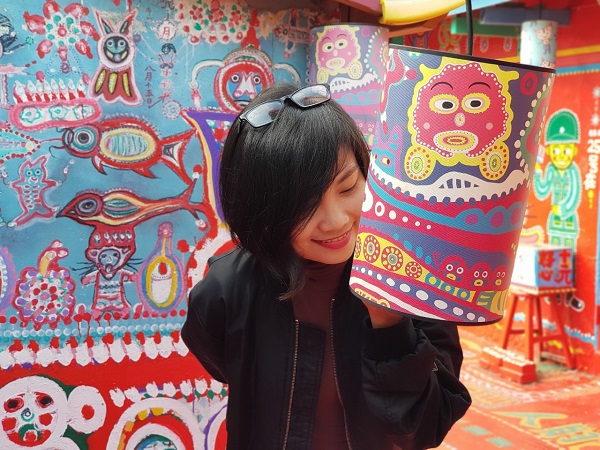 Later, these villages gradually disappeared as the government took back the land and gave it to construction companies to deploy new projects. Caihongjuan Village is one of these villages stills remain.

Mr. Huang, one of veterans (from Guangdong), who lives in Caihongjuan village, using all his talents and imagination to paint on the walls of his house.

Coming here, you will see the shapes that are funny, cute but also full of surrealism that demonstrate his drawing skills. Heard, his family members said that he had a talent for drawing since childhood. 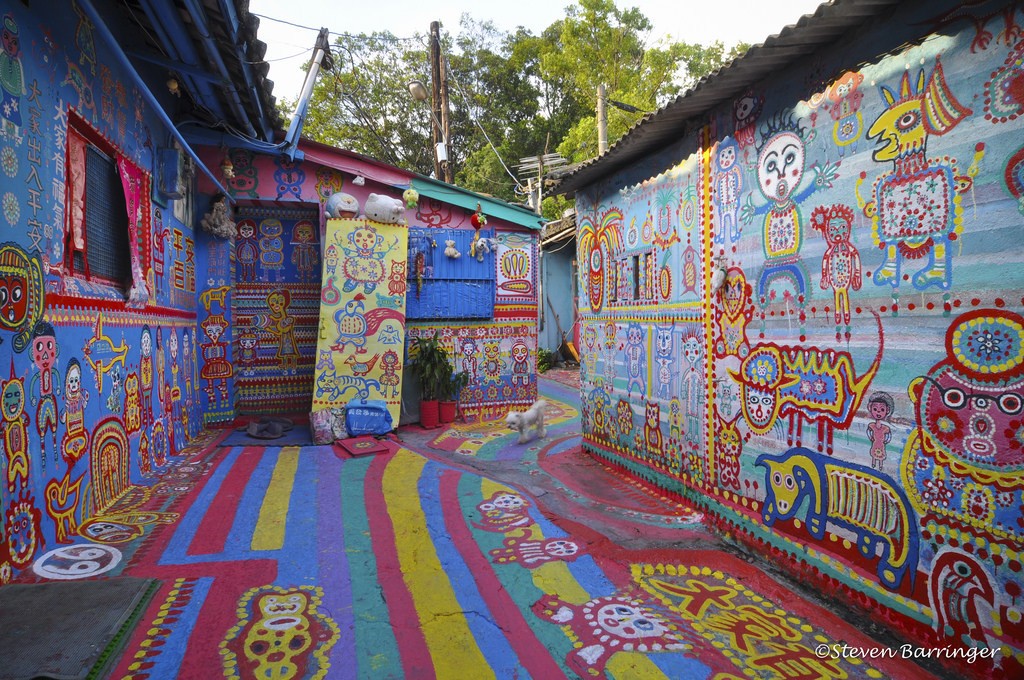 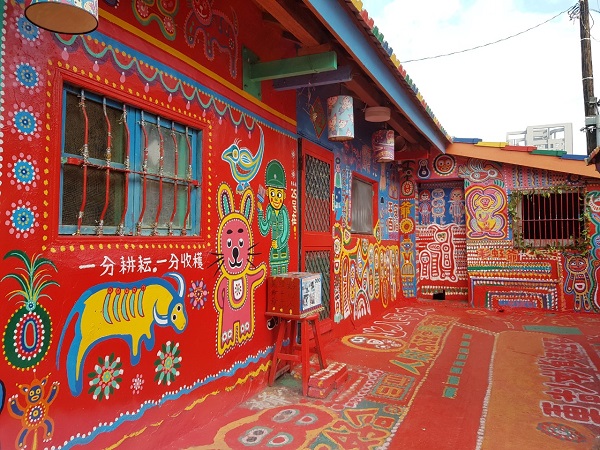 This village was discovered accidentally by students of Ling Tung University. After that, more and more people became known and came to visit and take pictures a lot. Thanks to the famous of the village, the government stopped the decision to acquire the land and viewed it as a tourist attraction. 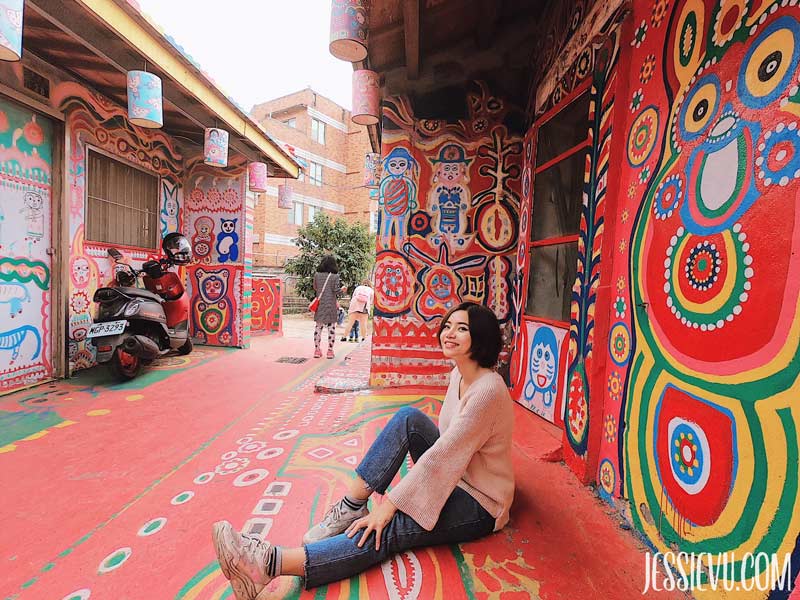 In the village, there are many handicrafts for sale, also decorated with motifs similar to the motifs on the paintings painted by Mr. Huang. There are also beautiful paper milk tea cups. 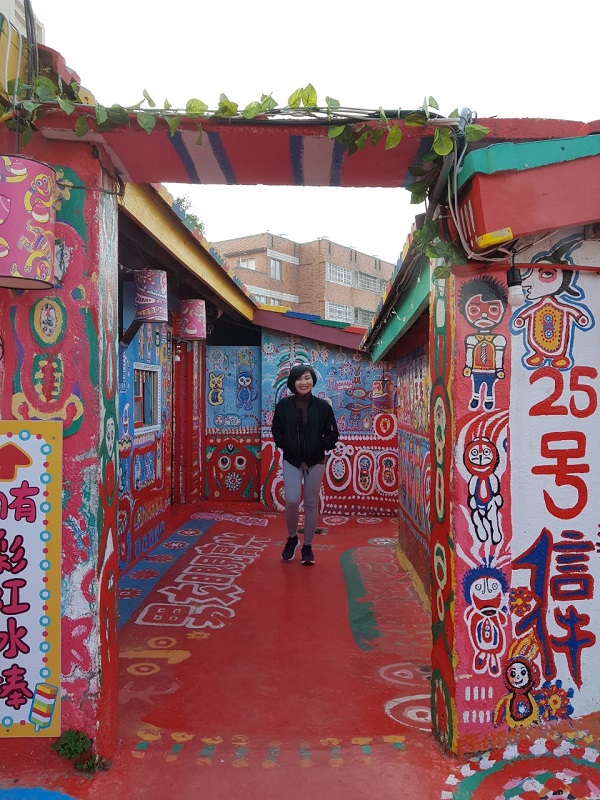 To support Mr. Huang or at least expressed your “thank you” for the government’s keeping of this village, you can buy something from the village. A souvenir, a paper cup… for example.

Mr. Huang is now 96 years old, very old, but still lives here. This is still really his house. When the tourists come, Mr. Huang often still took pictures with visitors. Although he was tired, his face looked happy. Perhaps it is a joy to be proud of because all his efforts and efforts have finally paid off.

Here, I also met a middle-aged brother, his nephew. Currently, he is the manager of everything in the “village”.

Around the entrance gate of Rainbow village, there are a number of street vendors selling agricultural products and local specialties with prices of NT$40 or more.

In Taiwan, in general, people are also easygoing, often allowing visitors to taste it first and then buy it later if they want. I mean dried things. 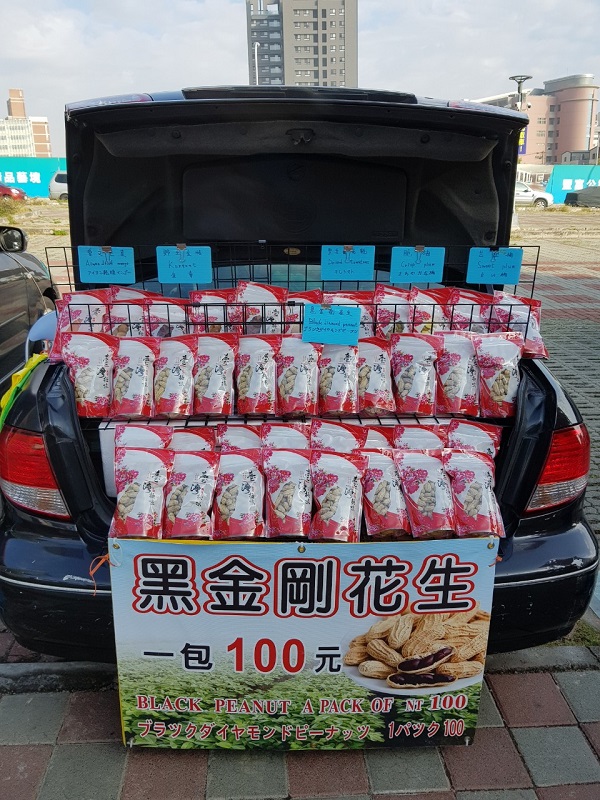 Besides, there are also stalls selling handicrafts, peking opera masks or earrings. Generally jewelry and souvenirs. 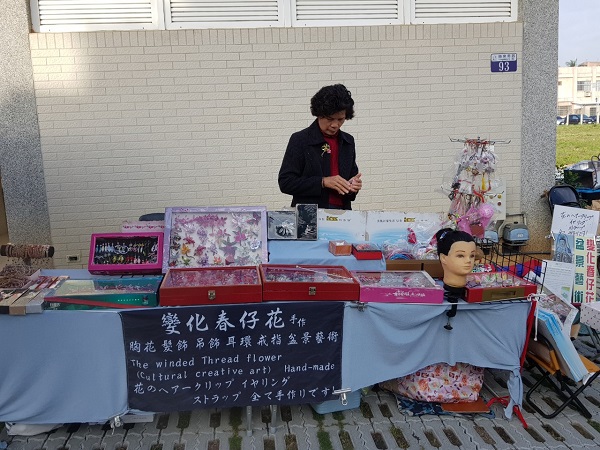 A slide, outside of Rainbow Village. Is this place built for kids to play? 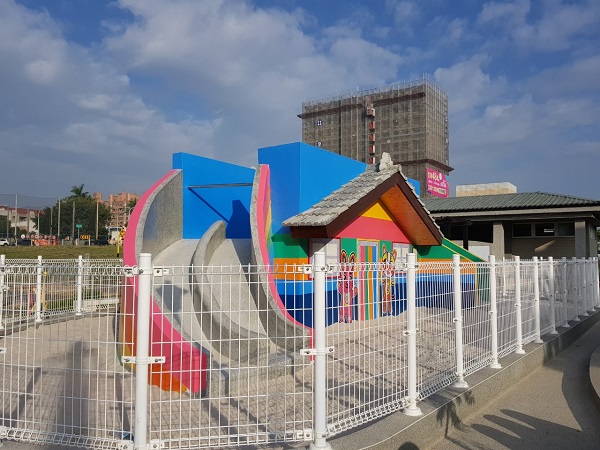 Some useful notes when coming to Rainbow Village Taichung Taiwan

Some best day tours, trips, activities and transfer services, tickets in, to and from Taichung you can refer to 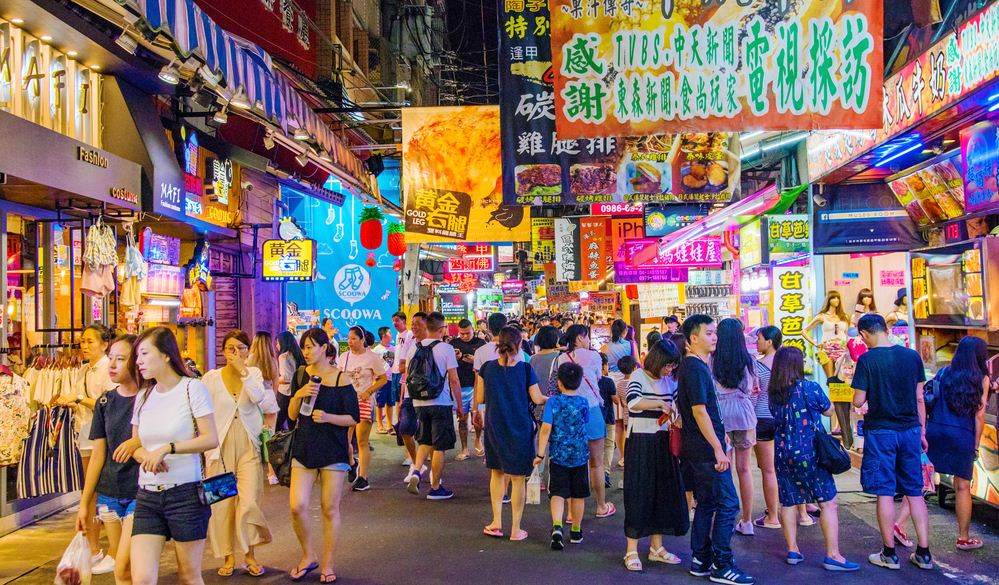 Are you looking for more top things to do in Taichung: Tours, activities, attractions and other things? Read more: Taichung blog — The fullest Taichung travel guide for a wonderful budget trip to Taichung. And Let’s check it out here.