With Wimbledon in full swing, rain finally turning to sunshine, and a diversion sorely needed amid the Brexit chaos, we’ve rounded up 10 of our favorite rooftop bars in London.

Packing-in a street level pub, a restaurant on the first floor, five bedrooms on the second, and a greenhouse and garden with dining room, bar, and wood-fired grill, the Culpeper is virtually a world unto its own in London’s Aldgate neighborhood near the heart of the city. Originally opened in 1884, the joint is named after Nicholas Culpeper, a local 17th-century herbalist. Drinks utilize the bounty of the garden with concoctions like Lemon-Thyme Ambrosia containing brandy, calvados, and prosecco. If stargazing is your speed, two astronomy workshops are scheduled for July 11 and August 8. Note: the rooftop bar and restaurant are both closed Mondays.

Radio Rooftop Bar at ME London

On the tenth floor of Melia’s flagship hotel, this is a place to see and be seen in a decidedly Ibiza-like setting. Most come to nibble classic tapas and sip one of nine versions of Spain’s favorite cocktail—the gin and tonic, believe it or not. The bar also hosts weekend brunches and champagne afternoon tea service.

Fantastic 360-degree views of London from the terrace of this Japanese/Brazilian/Peruvian-fusion bar on the thirty-eighth and thirty-ninth floors of the Heron Tower come with incredibly creative libations crafted by star bartender Richard Woods. We recommend trying the delicious Roasted Cosmo 2.0 or newly invented Strawberries & Cream.

Pergola on the Roof at Television Centre

Pitched atop the old BBC Television Centre in Shepherd’s Bush, and open only through the end of August, Pergola on the Roof is one of the city’s larger rooftop venues, serving food from four acclaimed local restaurants—Salt Yard, Rabbit, Patty & Bun, and Le Coq—under a dazzling canopy of evergreen ivy, wisteria and bougainvillea. We love the bookable day beds that seat up to a dozen, games on one of two boules courts, and a roaming drinks cart if getting up seems like too much effort.

Definitely one of our more unusual picks, Frank’s is actually a site-specific art project commissioned by the non-profit Bold Tendencies. Designed by Practice Architecture on the tenth floor of a parking lot in South London, it was opened in 2008 by bartender Frank Boxer and chef Michael Davies. The food is as funky as the setting, with offerings like ox heart kebabs, brown sugar hot wings, and tomatoes on toast. Cocktails tend to have an Italian bent: Try their Aperol Spritz or classic Negroni. Children and dogs welcome.

This is surely one of the swankiest spots in all of London, set on the hotel’s twelfth floor overlooking the River Thames. With interiors designed by Tom Dixon (think ruby red velvets and satellite chandeliers), the outdoor terrace is the place to imbibe a gin punch or champagne cocktail and nosh on a scrumptious charcuterie plate. Reservations of 4 or more are accepted, and the joint is jumping until 1 a.m. Tuesdays and Wednesday, and 1:30 a.m. on other days.

Vista at the Trafalgar

Anchoring the southwest corner of Trafalgar Square, Vista is known not only for its splendid views, from the Horse Guards Parade to the National Gallery, but also for its list of incredibly British cocktails. The Queen’s Garden Party is a riff on a classic Pimm’s with a dash of Bombay Gin and sparkling wine, and the vodka-based Jam Factory is bursting with summer berries, raspberry marmalade, and mandarin liqueur. Note: Reservations require a minimum of 6 guests, plus there’s a £5 cover charge and minimum spend for all.

Open only Wednesday through Sunday, from midday through to either 8:30 p.m. or 10:30 p.m., Netil360 is where you’ll find an excellent array of local tipples including draught beers from Five Points Brewery, spirits from the East London Liquor Company, and potent lollipops from Poptails. Netil House, in hip Hackney, is also home to a workspace, gallery, and café. Best of all is the bar’s mascot dog Tres who is amenable to play with other four-legged friends if you have them.

Set in Shoreditch, between Islington and Hackney, the rooftop of this unassuming, office block is home to an outrageously colorful hideaway harking back to the summer of 1967. One look at the list of cocktails confirms it: Drop Sorbet, Not Bombs, Freedom of Peach, LSTea, The Limes They Are A Changin’. Add a Beatnik Burger with a side of Carlos Santana Slaw and you’re all set for a night under the stars. Queen of Hoxton is open every day from noon to as late as 2 a.m. Special events this summer include face painting and tie dying classes.

This Camden Town institution was once a horse hospital (private “stables” can be reserved for groups inside), but we come for the Wonderland rooftop inspired by Lewis Carroll’s Alice in Wonderland, published 151 years ago. The bar describes itself as having “other-worldly décor and eccentric bartenders,” and we couldn’t agree more, especially when engaged in “absurd activities” with the likes of Mr. Rabbit and the Mad Hatter. Cocktails are served in teapots, naturally. 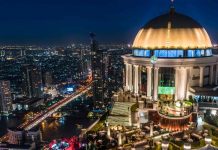 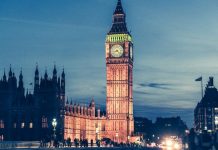 Where should I go in London? — 21 top famous places to go, see & best places to visit in London 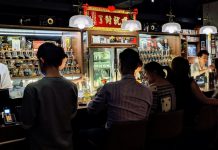 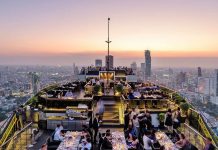 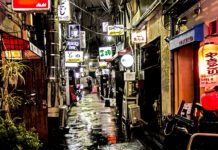