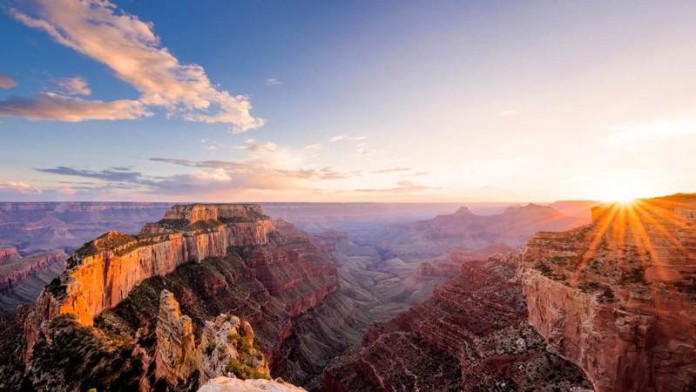 On my first trip to the Grand Canyon, I made a classic rookie mistake: part of a longer road trip, I didn’t give myself much time and I didn’t do any advance research, so I ended up with a version of the Griswold experience. There it was – big, beautiful but somewhat underwhelming. Back in the car.

And I wasn’t alone. Most visitors seemed to be slowly driving the South Rim and stopping at all of the same viewpoints, taking some photos, but doing little else. With a park so vast, it seemed like it would take a serious investment of time and effort to really experience what it had to offer and get away from the crowds.

Getting to The Grand Canyon

Coming from Flagstaff, most visitors take 180 North into Grand Canyon National Park, FlagStuff suggests a nice alternative: take Highway 89 North to Cameron to enter through the lesser-used East Entrance (sometimes known as Desert View). If you hit Cameron around lunchtime, plan a stop at The Cameron Trading Post for a local specialty: Navajo tacos, homemade frybread with green chili and taco fixings. Entering the park from the east gives you the opportunity to stop along the way at the viewpoints overlooking the Little Colorado River Gorge and then explore Desert View and Grandview Point along the East Rim.

Going Over The Edge

The view from the South Rim is spectacular for the sweeping panoramas, but to really experience the Canyon you should take the time to do at least a short hike down below the rim and see it on a different scale.

‘A point that I would make to my visitors,’ says eazeliff, ‘is not to just take in the big picture, but to appreciate the small little details of beauty, such as the pine tree growing between two rocky columns at Moran Point, the rocks hanging at precarious angles, the backlighting of early morning light against the Mormon-tea bushes.’

For shorter hikes, FlagStuff has several tips. ‘If someone could only do one short hike at the Canyon, I’d have to suggest the Kaibab Trail to Cedar Ridge (3 miles total roundtrip) or Skeleton Point (6 miles total), or Grandview Trail to the first overlook (about 2.5 miles roundtrip, but a much more rugged trail). These hikes have the most expansive views for a relatively short hike. For someone doing a more ambitious trek, I’d suggest the Bright Angel Trail to Plateau Point (12.2 miles total). The Bright Angel is less spectacular than the Kaibab in its upper reaches, but for a longer hike it has more diversity and this trek ends at a truly great overlook of the Colorado River. For someone who is an experienced hiker and wanted a taste of the backcountry, I might suggest Grandview to Horseshoe Mesa, which is only 6 miles roundtrip but is fairly intense.’

On the well-known mule trips into the canyon, eazeliff recommends that travelers give them a try.’Yes they smell, and it’s a rough ride, but I regard those mule trips as some of the greatest experiences of my travels.’

The best way to avoid crowds is to come at the right time of year. The busiest time of year is from Memorial Day (end of May) to Labor Day (beginning of September), which is also the hottest time of year, especially down in the Canyon. Crowds start to dwindle in late August as kids are getting ready to go back to school and many European travelers return home. December before Christmas, January and February are the slowest times of the year.

‘Don’t be afraid of bad weather, even in winter,’ FlagStuff suggests. ‘Everyone else will stay home, and as soon as the storm breaks you’ll be treated to the Canyon at its most striking.’ Apart from the winter months, both eazeliff and FlagStuff recommend a visit in October when the weather is mild, the aspens are changing color, and the crowd is reduced to more discerning travelers.

Even during the busiest months, the best way to avoid crowds is to walk, even just a short distance away from the parking areas. For a more peaceful viewpoint experience, try Shoshone Point, suggests FlagStuff, the only South Rim overlook generally closed to vehicle access. ‘Most of the time you have to walk there, about a 3/4 mile flat and pleasant forest stroll. It’s a lovely place, and very peaceful even on the busiest summer day. Not adventurous really, but definitely off the beaten track.’

‘The main campground, Mather, turns into a small city in summer,’ says eazeliff. ‘I like camping at Desert View, and also a little-known place called Ten-X campground in the Kaibab National Forest just south of Tusayan, a gem which seldom fills up.’

If geology has always seemed boring to you, the Grand Canyon is the place to prove you wrong. To get an introduction to the geology and natural history of Grand Canyon, stop by the recently restored museum at Yavapai Point.

‘There are many ranger-led natural history programs on various topics, and short interpretive hikes also led by a park ranger. These programs are generally excellent,’ says FlagStuff. ‘There’s a number of very good, very readable field guides to the geology and ecology available, and in the past I’ve gotten a lot out of carrying one with me on hikes and reading along as I descend through the rock layers and ecological zones.’

Buy the postcard. The animals smell, walk narrow ledges carved into the canyon wall and come with a daunting list of rules,’ said a recent article in the New York Times. But eazeliff disagrees: ‘Yes they smell, and it’s a rough ride, but I regard those mule trips as some of the greatest experiences of my travels.’

Food in The Park

‘I don’t think the food is awful so much as generally mediocre and overpriced, says FlagStuff. ‘El Tovar and the Arizona Room offer a memorable atmosphere and passable food at the higher end, but everything else is strictly utilitarian. Flagstaff, and to a much lesser extent Williams, have a full range of good restaurants, but even then fussy big-city epicureans would be wise to tone down their expectations for a few days.’ But it’s not all bad news on the food front: ‘Eating an ice cream cone on the deck behind the Bright Angel Lodge is one of my very favorite things to do at the South Rim.’

As The Sun Sets

Watching the sunset is a popular activity at the Grand Canyon and the overlooks can fill up on summer evenings. FlagStuff recommends that visitors take the shuttle bus from the Village out on the Hermit’s Rest Road, get dropped off at a viewpoint, and then walk the Rim Trail to another viewpoint to catch the bus for a ride back. ‘The Rim Trail is a great, easy way to get away from the crowds, and the viewpoints along Hermit Rest Road are superb for sunset.’

‘I would suggest that people view the sunset from one of the viewpoints, let the gawkers leave, and stay there to take in the subtleties and otherworldly qualities of the Canyon as it slips into darkness,’ says eazeliff.