The Puglia region is famous not only for its paradise beaches with clear blue sea, but also for its beautiful small towns. Unlike some old towns in Central Italy, the towns in Puglia are covered with a white color that highlights the vibrant colors of flowers and the sea. If you have the opportunity to come to Puglia, you cannot ignore the dreamlike towns in the list below. All of these places can be reached by train or bus (check on Omio). So, where to go in Puglia? Let’s check out our suggested 10 top places to visit in (Puglia places to visit) including best places in Puglia, best places to go in Puglia and most beautiful places in Puglia as well as best towns in Puglia.

Located at the extreme southeast of Italy, Puglia is not only a land famous for its agriculture with grapes and olives, but also attracts tourists by its beautiful scenery, ancient architectures or fishing villages on the undulating islands and long coastline. Especially the picturesque towns like pictures in fairy tales.

The entire town center (Monti) has a lot of pyramidal trulli stone houses (stone huts) which are built with slabs of limestone and stacked on top of each other to form pyramidal, domed or conical roofs. The trulli were built around the 15th century. In total there are about 1030 trulli in the Monti district.

These “smurf” houses are made entirely of stacked limestone slabs with no lime or mortar adhesive. The outside of the houses are painted with white lime to kill bacteria, while the roofs are dark gray due to the stone that has been soaked in perennial fungi. On the roofs are very special shapes: some are for exorcism, some are for worshiping gods, and some are for the love of a newlywed couple.

Strolling through the cobblestone streets weaving between these trulli houses, you will be mesmerized by the colorful flower pots, the drooping green leaves and the funny decorative shapes hanging between the houses.

At night, the Monti area is lit up to create a fairy-tale shimmering atmosphere. So if you have time, you should stay until the evening.

So, why did people at that time build trullis instead of building houses as usual? The main reason is… to evade house tax. Because these trullis are stacked from stones, dismantling is also easy when an inspector conducting. So, since then, the Italians have been very nimble, right?!

Thanks to its unique construction, since 1996 UNESCO has recognized trulli in Alberobello as a World Cultural Heritage.

Where to go in Puglia: Locorotondo

Only about 15 minutes by train or bus from Alberobello is Locorotondo, one of the most beautiful towns in Italy.

From a distance, Locorotondo stands out for its series of white rectangular houses with characteristic pitched roofs, which are known as “cummerse”. The name Locorotondo comes from the Latin “locus rotundus”, which refers to the circular hill on which the town was built. 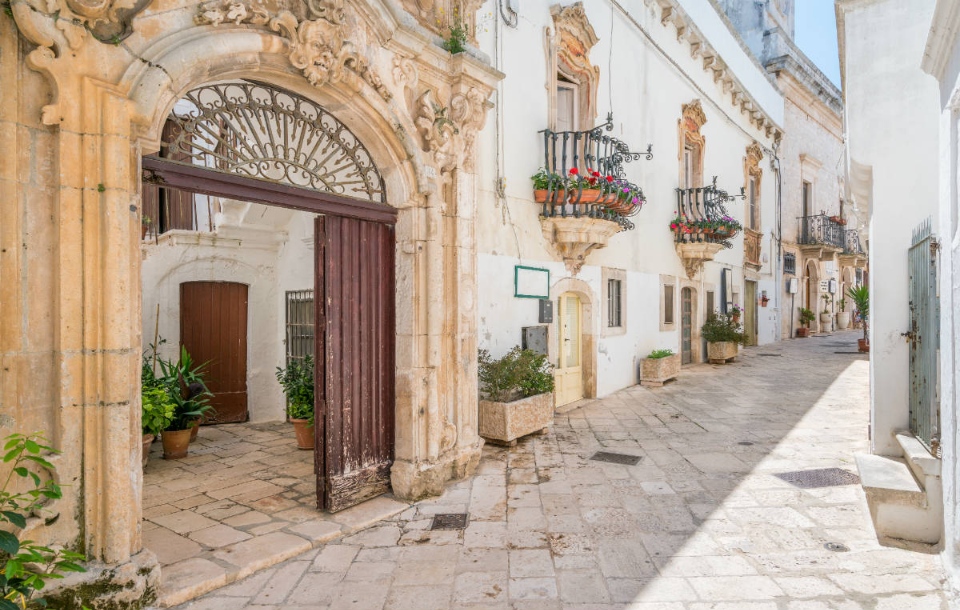 Locorotondo is very small, so it only takes about 2 hours to go all the way. Walking around the town center is sometimes surprised by the charming shooting angles. Those are pretty and brilliant flower pots placed along the stairs and on someone’s balcony. Or simply a row of green vines crossing a road.

When wandering around Locorotondo, you just let your soul “get lost” naturally among the small streets, not follow any specific route. That’s how you can feel its full beauty. Just outside the center is a view of the Itria valley with olive trees interspersed with beautiful trulli.

Polignano a Mare is a small town built on a coastal cliff, just over 30km from Bari. The white of the houses, the turquoise of the sea, the color of the flowers and the artistry of the town make for a perfect picture. Thanks to its charming beauty, Polignano a Mare is also known as “the pearl of the Adriatic sea” (Perla dell’Adriatico).

Polignano always knows how to surprise visitors with small zigzag white alleys dotted with very pretty flower pots and plants, sometimes interspersed with certain poetic verses on the steps, and then ends at a balcony in front of the windy sea.

It is also the birthplace of singer Domenico Modugno of the famous song “Nel blu dipinto di blu”. Therefore, his mark is also seen in the lyrics along the Via Roma or the statue of the artist himself in the center.

The symbol of the town is Lama Monachile, a turquoise beach located between two high cliffs.

In addition to the old center with poetic streets, Polignano also has many caves and grottos. One of the most famous places for luxury is Grotta Palazzese, the cave restaurant of the 5-star hotel of the same name. But looking at it from afar, I heard it was bad to eat and too expensive.

You can take part in water activities like the Red Bull Cliff Diving World Series, a diving activity that takes place here every summer.

The town has a lot of restaurants and bars, so if you can, you should linger in the evening to enjoy a cocktail on a very romantic seafront balcony.

Most beautiful places in Puglia: Ostuni

Ostuni is in the province of Brindisi and is also known as Città Bianca, or the white city. The capital is so called because of course… the entire houses are painted in white.

The reason for painting white is to make Ostuni more beautiful? In fact, the main use of white lime was to help clean and disinfect the area before the plague raged in the Middle Ages.

Although there are other white towns like that, Ostuni has a very attractive beauty of its own. The houses in the old center were built on the slopes of the hills, interspersed with winding squares, streets and alleys. Somewhere, I see very typical prickly pear cactus pots. On some roads, you can see the beautiful view of olive trees and the Adriatic Sea. One of the most popular attractions in town is the cathedral of Santa Maria Assunta in Cielo and the Scoppa dome just outside the church.

Through the center are many bustling shops. If you stop here for lunch or dinner, there is a delicious Pastasciutta restaurant with cheap prices.

Goodbye towns in the valley of Itria, now I will go down to Salento to visit a very famous seaside town: Otranto. The seaside town of Otranto has always been a destination for art and history enthusiasts, because here they can admire the beautiful Romanesque architecture of the Cathedral of Otranto. Besides, gourmets cannot miss enjoying delicious and fresh seafood at restaurants located next to the river. Or write a romantic story while walking in the old town, through small alleys paved with travertine tiles.

This is the most eastern town in Italy, more than 1 hour by train from Lecce. The whole town center is built in a solid wall overlooking the turquoise sea.

From the Aragonese castle, a military fortress built in the 15th century, continue walking up to start the winding cobblestoned streets with shops and restaurants in the center. Because it is located by the sea, along the way there will be many beautiful views.

It takes only a few minutes to reach the Cathedral of Santa Maria Assunta, the most important attraction in the center. The church was built in the 11th century, the floor is tiled with very elaborate, intricate mosaics. It is also home to many… bones and skulls of 800 Catholics who refused to convert when the Turks invaded the town in 1480.

Not only the old center, near Otranto are beaches with extremely beautiful natural scenery. Don’t miss the Torre dell’Orso, Baia dei Turchi, Torre Sant’Andrea and especially the Grotta della Poesia, one of the most beautiful natural swimming pools in the world. Currently, to visit, it costs €3 to visit.

Coming to Trani, visitors will encounter quite a few special architectural works. A Trani stands out with its magical pink church by the sea, or with its medieval buildings and castles, with its limestone streets in the middle of the elegant old center.

Coming to this beautiful seaside town, you can experience a short day in bars, restaurants, as well as luxury shopping boutiques, stores and many vibrant festivals are often held here.

Lecce, the town known as the “Florence of the South” brings many masterpieces that make visitors admire. You can admire the vestiges of a Roman theater built in the 2nd century, or the bold Baroque architecture of the time with charming balconies. Ancient churches and palaces were built of laterite and ornate. Both gorgeous and nostalgic at the same time.

Most beautiful places in Puglia: Monopoli

Monopoli also has solid and solid seaside walls with impressive construction, or a golden sand bay next to the beach with crystal clear blue water iridescent in the summer sun.

Stopping to visit 8 small towns will bring visitors many interesting experiences about the ancient vestiges of the illustrious medieval architecture or the simplicity and simplicity of the hidden fishing villages. beneath the majestic mother nature. 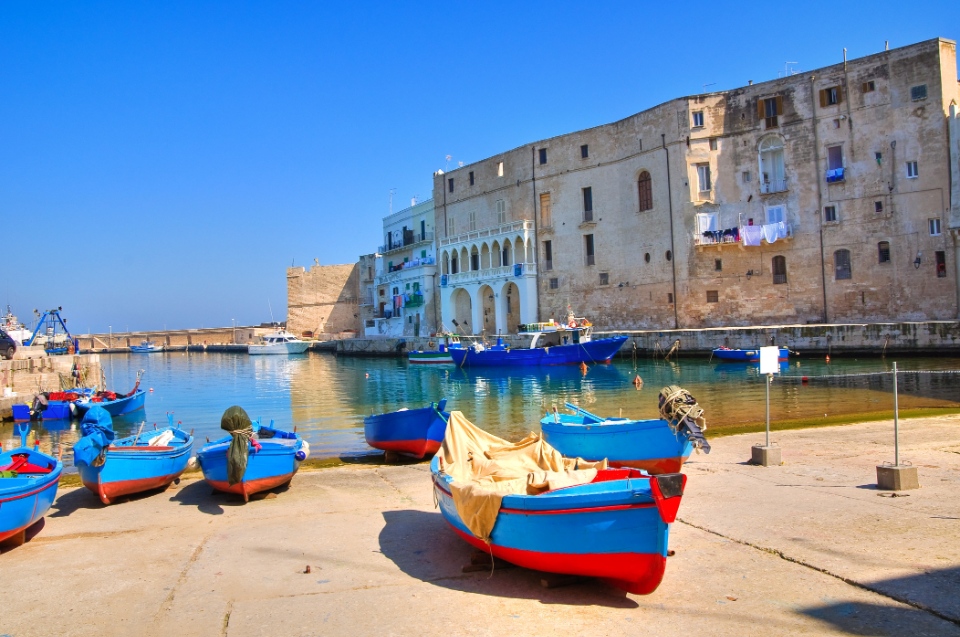 The town of Vieste is located in the eastern end of the Gargano peninsula, a headland jutting into the blue Adriatic Sea. Highlights here are the limestone walls surrounding the town and the wide stretch of sandy beach. Vieste’s splendid coastline is surrounded by secluded caves and coves, waiting to be discovered by visitors from afar. Here you can rest at the resorts that look like a maze, with beautiful cobblestone streets and buildings close together and balconies full of colorful flowers. 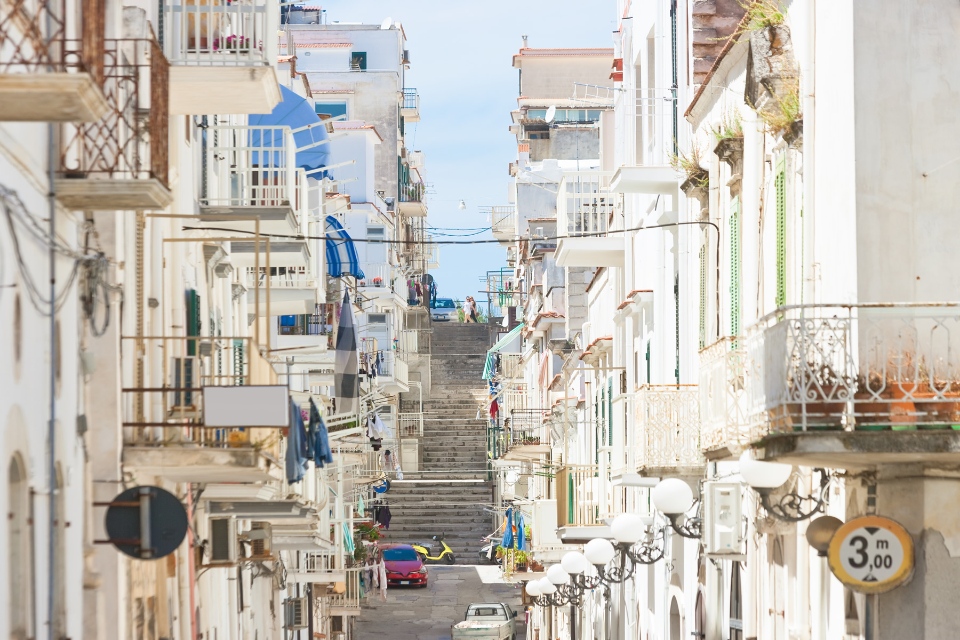 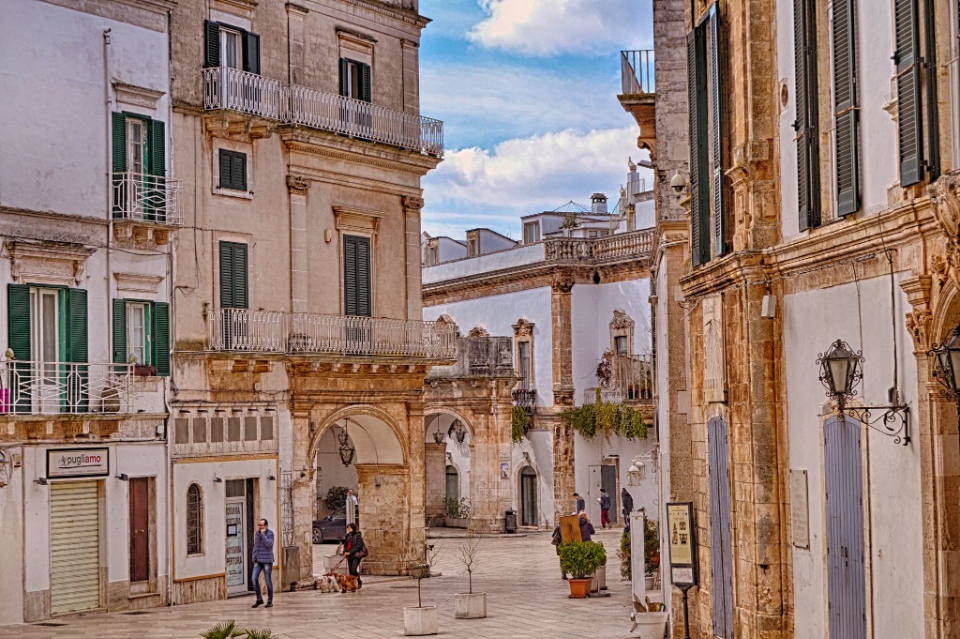 Martina Franca stands out with a space filled with a typical and elegant Baroque architectural style. It is one of Puglia’s most beautiful towns and is famous for its exquisite cold cuts. The town is surrounded by defensive stone walls and eye-catching gatehouses, with a charming combination of narrow alleys and many brilliant white houses interspersed with perennial trees. 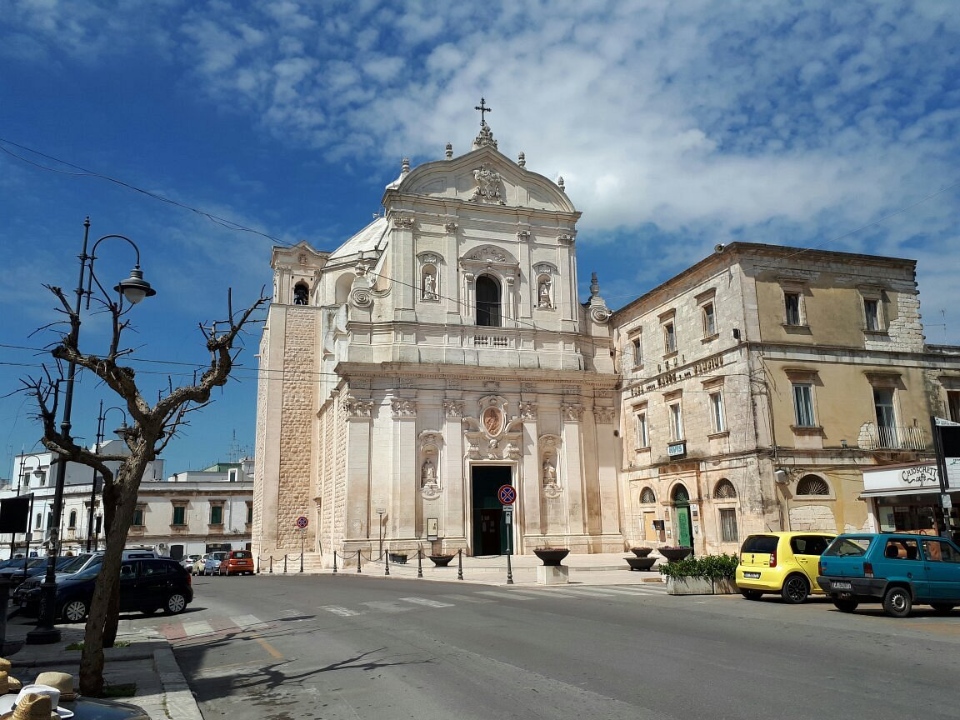 Personally, I have always liked pretty small towns, so when I come here I feel like I’m lost in a fairyland. I’m sure you’ll fall in love with the towns and landscapes of Puglia as much as I did. See you in the next post!

Some best day tours, trips, activities and transfer services, tickets in, from and to Bari you can refer to