Taipei is the capital of Taiwan, so traveling around here mainly by MRT, quite convenient. Alternatively, you can also choose the bus or experience cycling around the city. To getting from Taipei to other cities or surrounding areas, you should take the train, HSR high speed train or traveling by coach if you taking the 1-day tours. Rich kid team can choose to take taxi, but I did not mention in this article because taxis in Taipei are quite expensive, but most of the places to visit we will travel can take advantage of the above means of transport, so we don’t need to take taxi to save money :)). So, how to get around Taipei, how to travel around Taipei and how to go around Taipei? Let’s check out our suggested 3 best way to get around Taipei and best way to travel around Taipei and from Taipei to other cities to find out the answer!

In Taipei, in order for the travel to be convenient, your smartphone definitely must be connected to Wifi or 4G constantly. Unfortunately, If you get lost in the wrong way, there’s still a way to contact for help from your relatives too :))

It will be overwhelming when you first come to the MRT station in Taipei because it is “super huge”, guys, especially the Taipei Main Station … You will think that you are going in an airport. But do not worry, in Taipei, the government has planned to create the most favorable conditions for the traveling of its people and tourists, all MRT stations have clear signs in English and easy to understand.

Traveling by MRT in Taipei you definetly must have an iPass card. You can use this card to take other public transportation such as Taoyuan Airport MRT from the airport to the city center, bus, train, light rail, rent U-bike, etc. You also can use the card to buy goods at convenience stores (Family Mart, OK, Hi-life, 7-Eleven), movie theaters, supermarkets, cafes, … and some other famous attractions.

Traveling by MRT in Taipei, you must download the Go! Taipei Metro application (iOS, Android) to find for the MRT lines and routes.

Almost 90% of our trips are by MRT, because most of the famous sightseeing and shopping places are right next the MRT stations, such as Taipei 101 tower, Ximending market, Chiang Kai-shek Memorial Hall, Longshan Temple, Taipei city hall, Tamsui Port…

A few notes when taking the MRT

There will be places not near the subway (MRT) stations, so you can take the bus. Bus tickets are cheaper than MRT and of course it’s slower than MRT already. The bus routes in Taipei operate from 5 am to 12 pm, those who prefer nightlife remember this operating hours to catch the last bus. At the bus stop there is always schedule information, you should also download the BusTracker Taiwan (iOS, Android) application to track the bus schedules for convenience. At some bus stations, schedule information is displayed in Chinese without English, especially in suburban bus stops, such as buses from the train station to the Jiufen. You can use Google to translate images or ask people around.

Actually, taking the bus is not convenient as MRT. But those who still want to try traveling by bus rising to the ground to see Taipei but are lazy to wait and are afraid to find a bus that takes time, you can experience the Taipei Double-Decker Sightseeing Hop-on Hop-off Bus. Just get on the buus and the driver will take you on a fixed route through famous places of Taipei in half a day or a day.

Is cycling also an interesting and unique experience when traveling, right?! Near bus stops, MRT stations, squares and major transport landmarks in the city often have many available bike rows that belonging to the public vehicle system (Ubike company). The bicycle is yellow, easily identifiable, locked by electronic latch, you only need to register with the iPass card at the automatic machines (located near the drop-off locations) with the phone number in Taiwan to be used. Each phone number can only be used once to register.

You will be free of charge to travel for the first 30 minutes, after which you will be charged NTD 10 for the 30 minutes of use. Quite cheap for an enjoyable experience!

Railway system and high-speed train in Taipei are extremely developed, super convenient for the travel of people and tourists. Taiwan lovers are definitely sure to cherish places like Pingxi, Shifen and Jingtong, Houtong Cat Village, Jiufen Ancient Village, Yehliu Geopark, Liushishi Mountain in Hualien, East Rift Valley in their bucket list. To get to the above destinations, you need to go to Taipei Main Station to catch the train. Specifically which train, which stations you need to find out before going. Because at the most train stations, all information is in Chinese, so be sure, you shoul ask the staff at the train station to get on the right train. A little tip from my experience is that you save pictures of famous places that you want to go, but if communication is too difficult, you only show the picture to ask the security guards at the train station, it’s very effective :)). 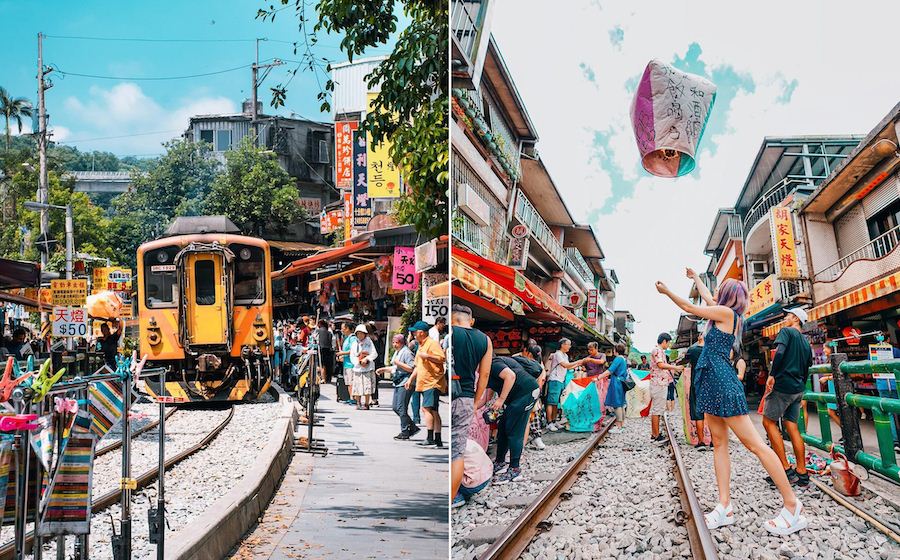 Are you finding more top things to do in Taipei: Tours, activities, attractions and other things? Read more: Taipei itinerary 4 days — How to spend 4 days in Taipei & what to do in Taipei for 4 days perfectly?