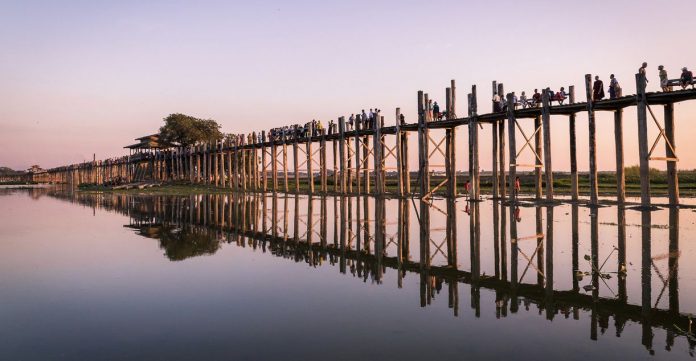 Mandalay is a large city in Myanmar (Burma), just behind the capital of Yangon. Before going to Mandalay, I researched and found that Mandalay did not has many interesting things like Bagan or Inle, so I only spent one day exploring this city, taking a night bus to Mandalay and then going to bus station in the evening to getting to Inle. Although I also have a small amount of time, I still want to go to as many places as possible, and also have bad luck that day so my one day in Mandalay is a day of running and .. running! So, what to do in Mandalay? Let’s check out my Mandalay travel blog (Mandalay blog) with the fullest Mandalay travel guide and how to spend 1 day in Mandalay (one day in Mandalay, Mandalay one day trip) pefectly from how to get to Mandalay, best places to visit and top things to do… to find out the answer! Below are some Mandalay travel experiences you can refer to considering to put Mandalay on your itinerary.

Mandalay travel guide: How to get to Mandalay and transportation in this city

If you depart from Yangon or other cities to Mandalay, you also can take the train or bus, taking the bus is still better because the train is very slow, but the bus in Myanmar is very good quality, better than long-distance coaches in Vietnam much. You can refer to one of the best bus companies in Myanmar is JJ Express.

You can book in advance VIP Bus Ticket (One Way) between Yangon and Mandalay here.

There are many ways to getting around the city. If you are traveling in large groups, you should rent a taxi all day from morning to evening which is the most convenient and cheapest, the price range of 60.000-70.000 Kyats for a 4-seat car. If you travel alone (solo traveler), you can also rent a motorbike all day, about 20.000 Kyats, or like me, I rent a motorbike of 10.000 Kyats, fill up with 1.500 kyats of gasoline all day (gasoline in Myanmar is much cheaper than Vietnam), the total is 11.500 kyats for renting a motorbike in a day. Too good!

Like other Burma cities, Mandalay also has traditional Burmese dishes such as traditional rice, Shan noodles, and hot milk tea. You just go to the city center right next to Mandalay Palace, wandering in the early morning markets with lots of breakfast stalls including breads, youtiao (Chinese fried dough) and delicious hot milk tea, which are true to the life of the Burmese people. In addition, Mandalay also has the famous roasted duck at Golden Duck restaurant.

You can choose to rent hotels in the city center, with room rates from $20/night or more. To choose the best hotels in Mandalay you can find on Booking.com or Agoda.com.

Mandalay travel blog: Some of the main attractions in Mandalay

Ubein Bridge: The longest wooden bridge in the world with a length of up to 1.2km. 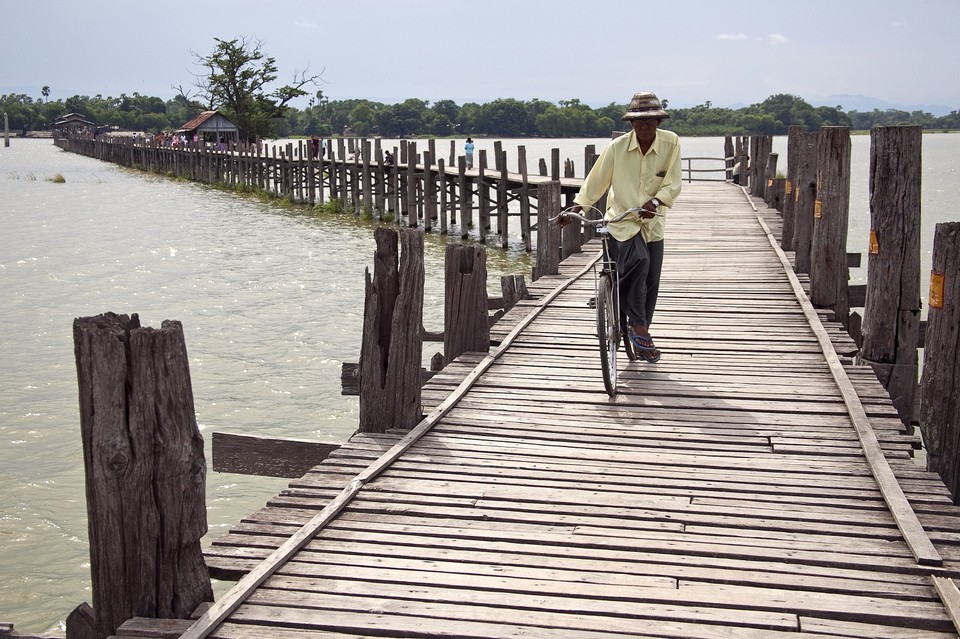 Inwa Village: About 5km to the south of Ubein Bridge, and you have to take the ferry to reach the village. When coming here, you have to rent a horse cart to go around the village, takes about 1.5-2 hours.

Mingun Village: The highlight of Mingun is the unique and famous Hsinbyume Paya white pagoda, the next is the Pahtodawgyi pagoda also under construction due to the earthquake, the world’s second largest bell of Mingun Bell, and the lion butt statue. There is also Sagaing Hill here.

Mandalay Palace: Located in the heart of the city center, a huge complex, the entrance fee is 10.000 Kyats including access many areas such as: Royal Palace, Shwenandaw Monastery, Sandamuni Pagoda, Kuthodaw Pagoda, Maha Atulawaiyan Monastery and Kyauktawgyi Pagoda. 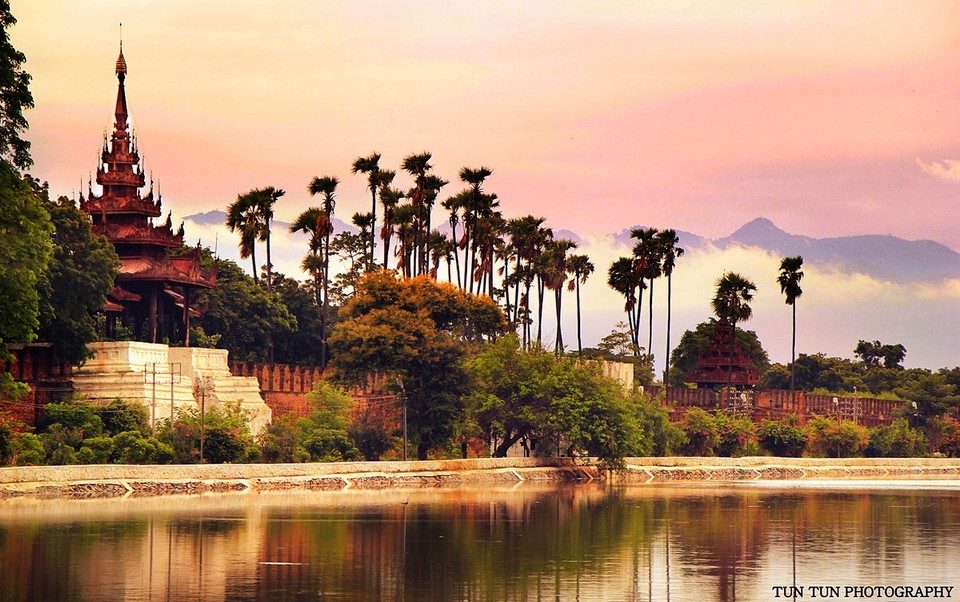 Mandalay Hill, goes to the top of the hill to visit Sutaungpyae Paya temple, watching the whole city from above.

There are also other less prominent attractions, if you have time, just explore enough, such as Kuthodaw Pagoda, Mahamuni Temple, Mahagandayon Monastery or handicraft workshops, gem markets …

The bus that took me from the ancient capital of Bagan to Mandalay was quite early, probably only about 3:30 am. A few people came together to share a taxi to the city to save money, but I wanted to rent a motorbike to travel for convenient, so I still didn’t know where to go now. The option of renting a motorbike at the bus stop seems to be not feasible because there are no rental shops here, motorbike taxi is only take, not for rent.

Ubein: The longest wooden bridge in the world

After renting a motorbike and leaving my passport, I went back to the Ubein bridge to catch the dawn. The distance was about a dozen kilometers and it was only nearly 5am in the morning. The bridge area is still quite deserted, strong winds and only sporadically a few people and monks to get up early. 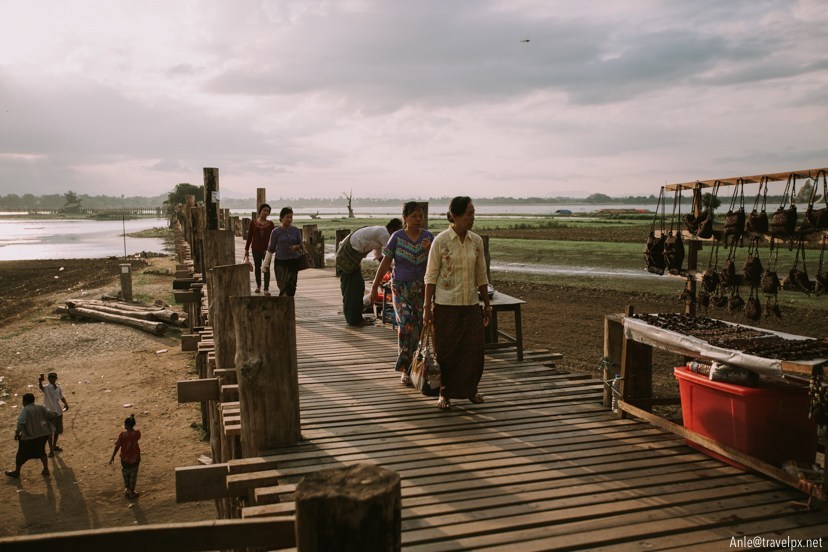 I rode the motorbike straight to the side of the Taung Tha Man River where the Ubein Bridge was crossed, place the motorbike at the foot of the bridge to walk back up the bridge. Motorbikes in Myanmar can place comfortable at anywhere without anyone to look after and never worry about theft. The bridge was right in front of my eyes, the pillars were made of quite large wooden rods, looking quite old but extremely strong. People walking on the bridge became more and more crowded as dawn was starting to wake up.

After taking a few photos at twilight, I started walking along the entire bridge to seeing how long it was. From here watch the rays of the early morning sun slanting through the floating clouds, creating beautiful light trails, looking at small boats in the distance, a few fishermen are fishing. In the middle of the bridge there were a few resting spots, I rewarded myself a slice of cool watermelon. 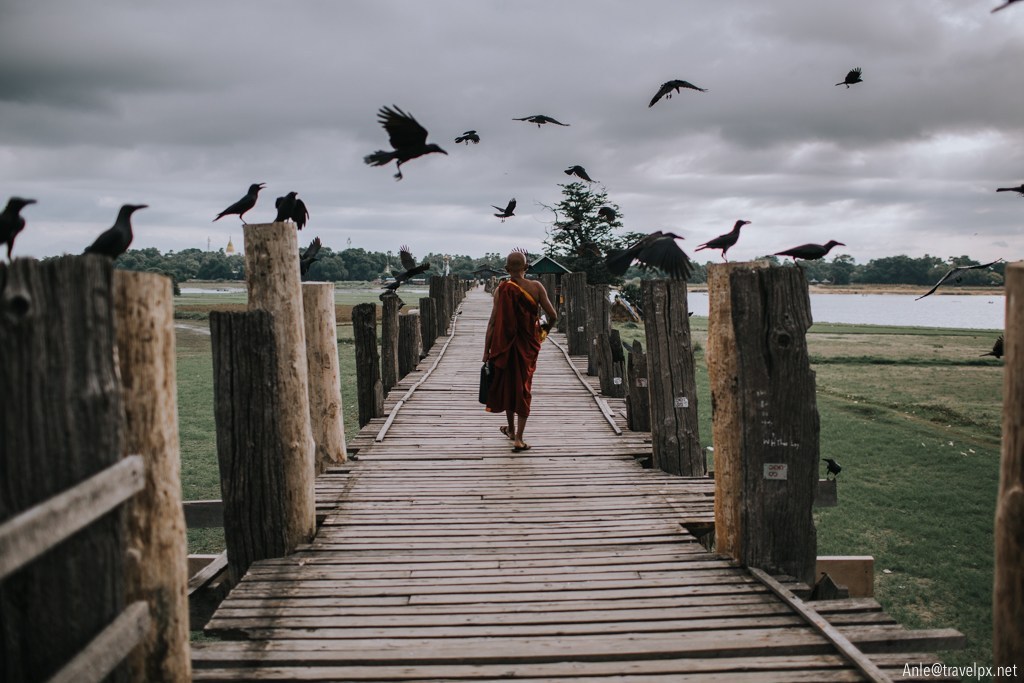 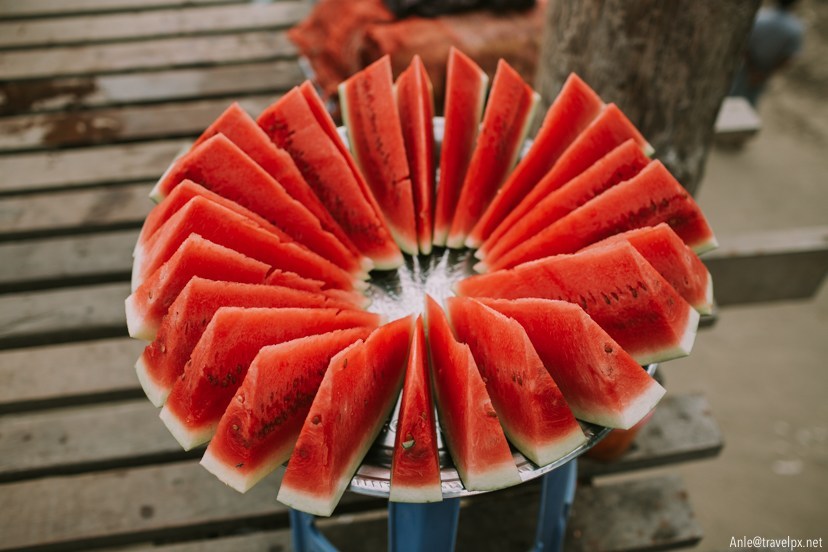 Now that the sun had begun to rise, I went back to the bridge and see some raindrops and dark clouds coming quite quickly. By the time I got to the shore, the heavy rain poured down, and I hurried into a nearby restaurant, avoid the rain and finding something to eat for breakfast.

This is a traditional restaurant of Myanmar with full of noodles, rice of all kinds. I ordered a bowl of mixed noodles and a cup of hot milk tea to sit around waiting for the rain to stop. It must be said that the milk tea here is so delicious, an extremely unique flavor that I have not tasted anywhere, fragrant and greasy.

I thought the rain would stop quickly, but it persisted from 7am until 12am, making me have to sit in the shop all morning, can not to go anywhere. Finally I decided to leave because there was no time left, though it was still raining. I put on an old raincoat I bought from a motorbike taxi driver nearby for 1.000 Kyats, going back to the center to go to Mingun village. Fortunately, after driving for a while, it started less rain and then stopped, it was a little sunny …

I went to the jetty where there were boats to cross the river to Mingun village, but when I arrived I found out that there was only one trip from Myan Gyan Jetty to Mingun village at 9am, the return trip was at 1 pm, while this time already almost 1 pm. Some villagers show me how to travel by road but will have to circle quite far back, not enough time anymore. Sad in 5 minutes, I turned and drive to Mandalay Hill.

The road to Mandalay Hill is about 30 minutes’ drive from Myan Gyan Jetty, there are many steep sections and bends but it is generally no problem for me. The feeling is quite similar to the way to Doi Suthep Pagoda in Chiang Mai, also reach the top, visit the temple and see the whole city from above.

After leaving Mandalay Hill, it was 3:00 pm, I hurriedly drove towards the Ubein Bridge to continue to Inwa village, intending to return to Ubein Bridge to watch the sunset. Take a short boat trip of about 5 minutes with a ticket price of 1.200 kyats to reach Inwa Village. Just arrived, there are many horse carts waiting for tourists. Each horse cart can carry about 2-3 people, I have asked a few guests to share money (10.000 kyats for 1 round the village and 4 sightseeing places) but most of them go in separate groups. Fortunately, there was finally an uncle who accepted to drive me alone for only 5.000 Kyats.

Horse-cart is quite popular vehicle in Myanmar, especially in some tourist destinations such as Bagan or Mandalay. Experience the ride of horse cart is also an interesting thing that you should definitely must try when coming to this peaceful country, gentle and relaxed. This is probably the most possible means for you to getting around Inwa village because the dirty roads, the village is also quite wide. There are a few attractions they require to buy tickets (the ticket price also is quite high) so I just watched from the outside. 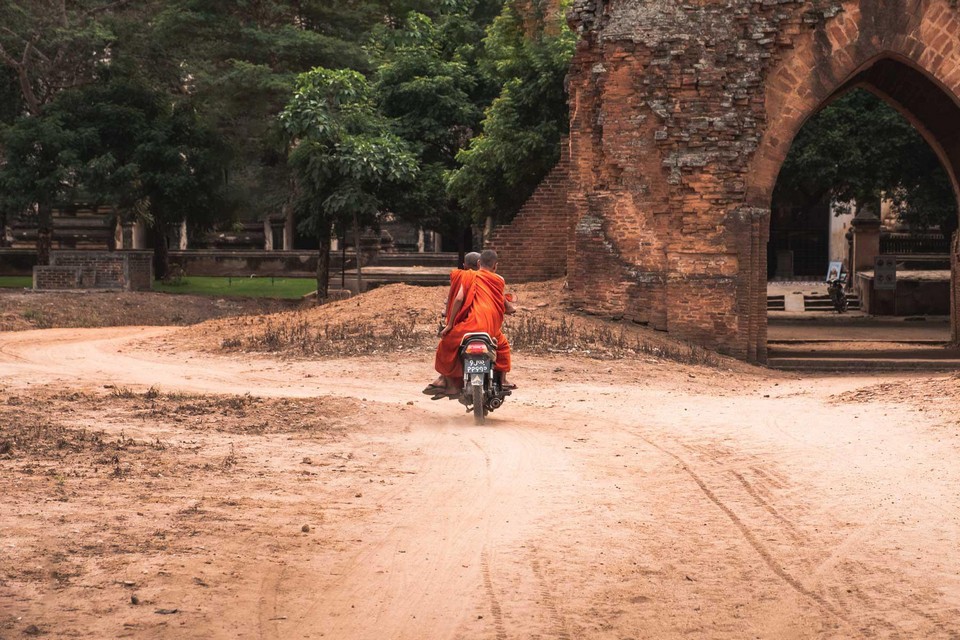 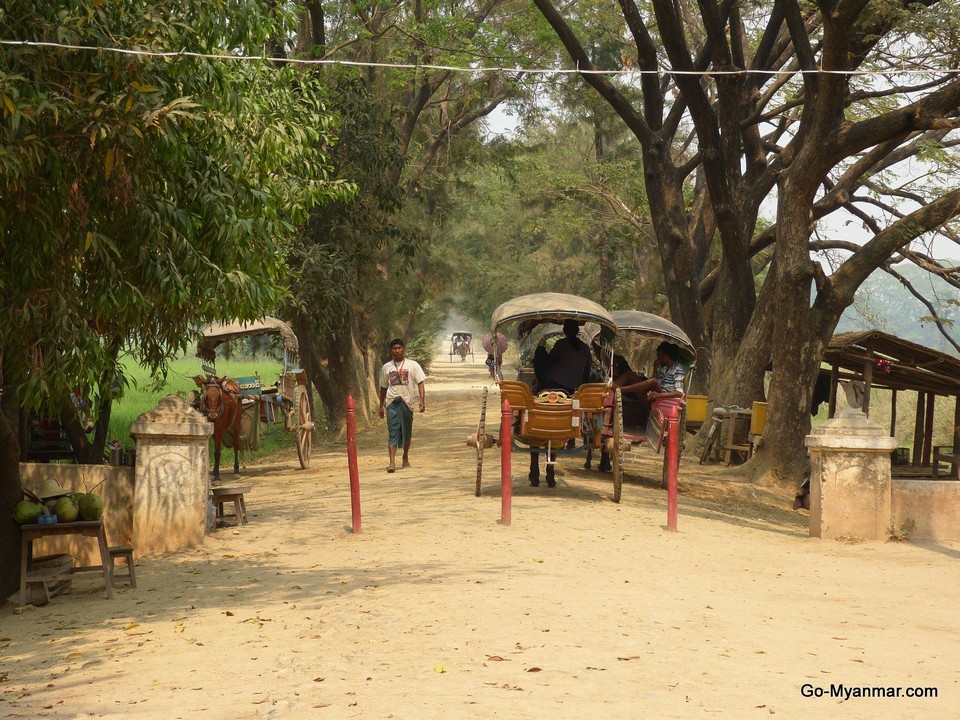 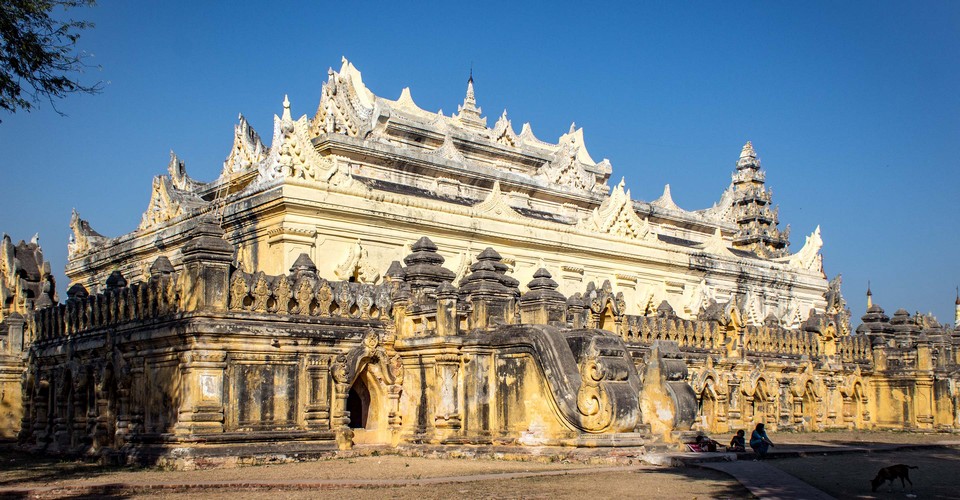 Sunset at Ubein Bridge and the Golden Duck restaurant

In the late afternoon, at the end of a rainy day, the sky was bright red, everything was fresh and wearing a new appearance. I rushed back to the Ubein Bridge so that I wouldn’t miss this beautiful moment. The bridge is now full of people, perhaps this is the time that tourists flock here the most. Each streak of red and yellow light on the horizon has created an unbelievably spectacular scene. 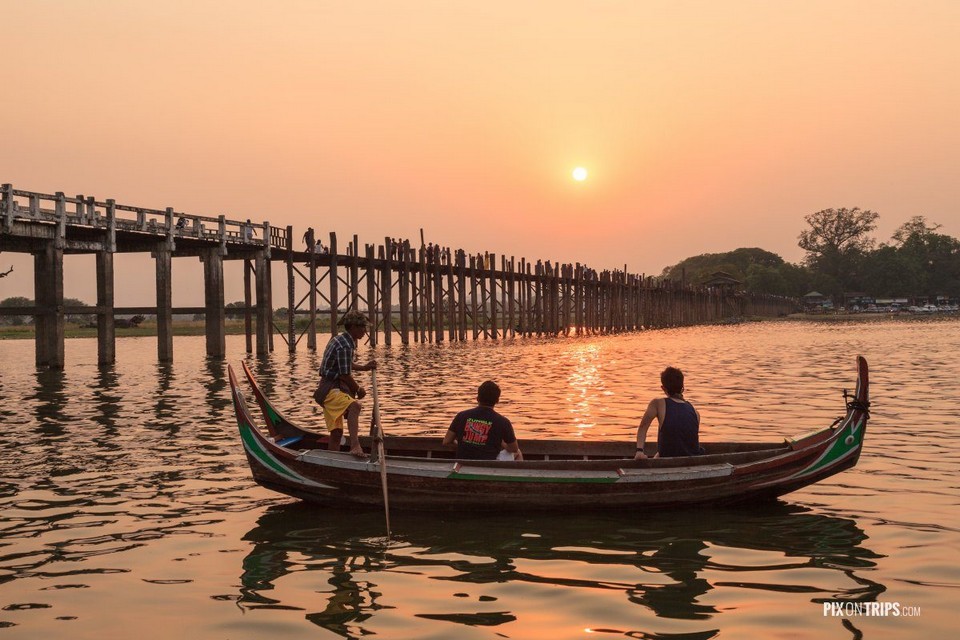 Farewell Ubein, my last experience in Mandalay was enjoying the roasted duck at the famous Golden Duck restaurant. My stomach is empty after a long day running like horse on the roads. This restaurant is quite large, located on a big road opposite to Mandalay Palace, the service quality is quite good with the standards of a luxurious restaurant, only a minus point is ordering a bit long because of the terrible crowded diners. I ordered half a duck cut into pieces, and a large dish of fried noodles. Although I were very hungry, the food was also delicious but it was true that I couldn’t eat all the food that I had ordered.

Around 8pm I return to the hotel to return the motorbike, take the motorbike taxi to the bus station to catch the bus at 10am to Inle …

Some best day tours, trips, activities and transfer services, tickets in and from Mandalay you can refer to

Are you looking for more Bagan travel guide and top things to do in Bagan: Tours, activities, attractions and other things? Check it out here.