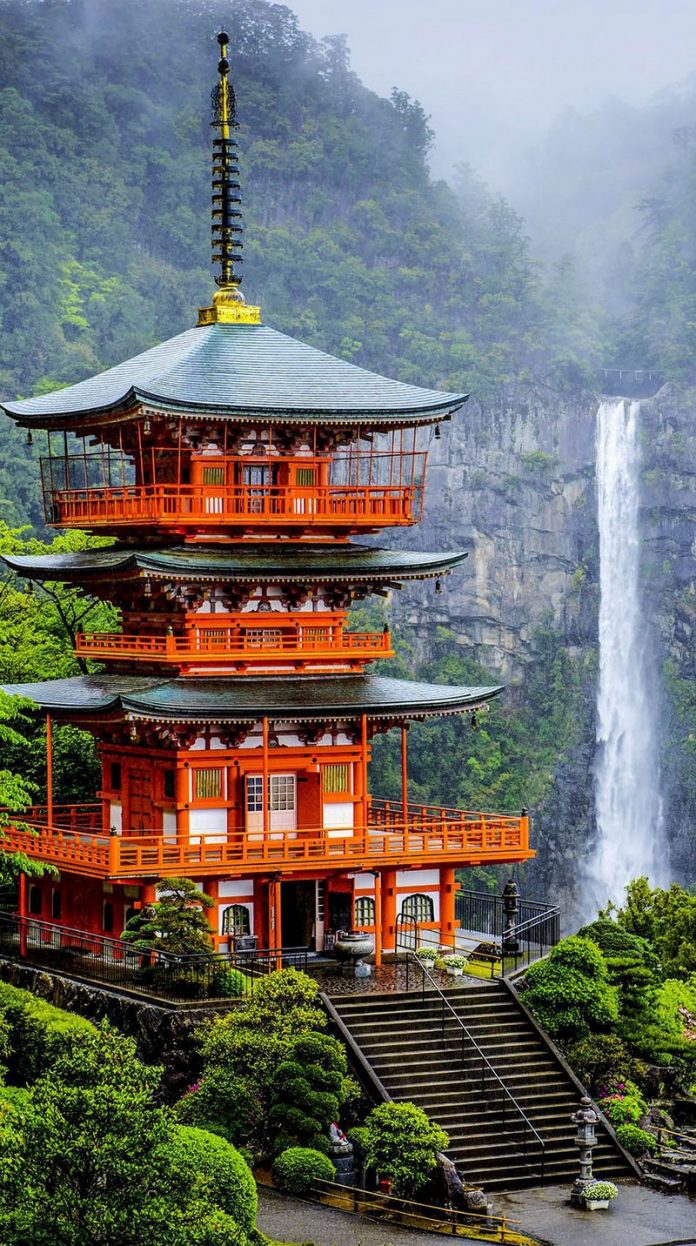 If you’ve ever visited Japan then you’ll know how amazing it is. And if you’ve never been before then what are you waiting for?! Check out this list compiled by Bored Panda. In it you’ll find some of the very best sights that this fascinating country has to offer. Some of them are familiar tourist spots. Others are more remote. And a couple are off the map altogether. But believe us when we say that all of them are awesome.

There’s a reason that Sagano Bamboo Forest ranks as one of Bored Panda’s favorite places in the world. What we can say, we love bamboo! We are pandas after all. But even we wouldn’t dream of munching on this beautiful forest situated in Arashiyama, the second-most popular tourist district in Kyoto. Walking through the towering bamboo groves is like being transported to another world, and even though it can get pretty crowded, especially during high season, there’s no denying that Sagano Bamboo Forest is a must for anybody visiting the region.

Hitachi Seaside Park, situated north east of Tokyo, is a perfect place to visit at any time of the year thanks to its abundance of season flowers that turn the landscape into a colorful canvas. September is the best time to visit, as that’s when most varieties are in bloom, but if you want to see these Baby Blue Eyes (otherwise known as Nemophilia) then be sure to visit during April and May. 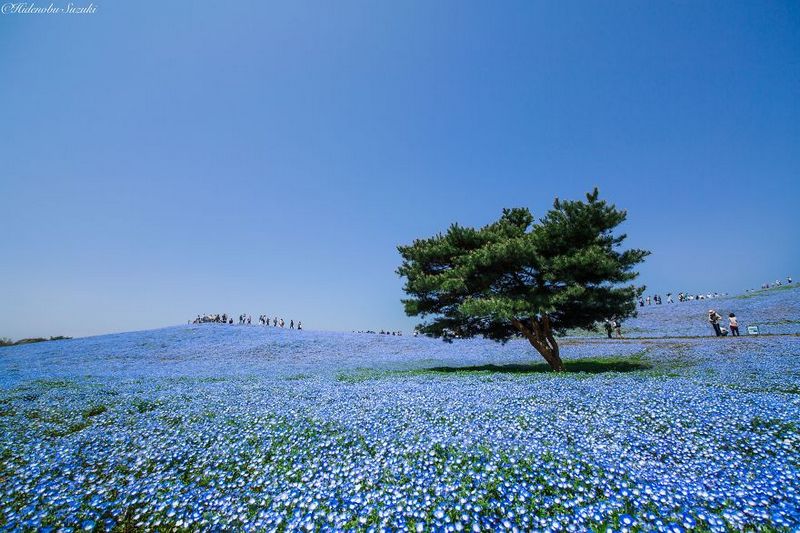 Autumn is the best time to visit Hitachi Seaside Park, a popular park on the east coast of Honshu, Japan’s biggest island. It takes about two hours to get there via public transport from Tokyo, making the park an ideal location for a day trip for those looking for a brief respite from the hustle and bustle of the capital.

The Fuji Shibazakura Festival is an annual event that celebrates the vibrant Shibazakura moss that grows in the Fuji Five Lakes area. Visitors to the festival will be greeted with a stunning sight: over 800,000 stalks of pink, white and purple moss covering field after field stretching towards the magnificent site of Mount Fuji in the background. The best time to see the moss varies every year but the festival is usually held between April and June. Visibility is best in the early mornings.

Ever wanted to walk through a Wisteria tunnel? Then you’re in luck, because Kawachi Fuji Garden has just what you’re looking for. The garden is located in the northern tip of Kyushu island, about an hour from Fukuoka via public transport. The Japanese love Wisteria (don’t we all?) and the flower even features in Waka, a classic Japanese poem. The best time to visit the Garden is in late April when the flowers are at their most colorful.

If you’re spending some time in the Toyko area then be sure to put a day aside to visit Kawagoe. The city can be reached in only 30 minutes by train, making it the perfect destination for a day trip. Kawagoe is well known for its rivers (Kawa means “river” and Goe means “over”) and is often referred to as “Little Edo” because the main street is said to retain the ambiance of the town during the Edo Period (1603-1867). Try scheduling your visit to coincide with the Kawagoe Festival, help for two days on the 3rd Saturday and Sunday of October.

Fushimi Inari Shine is one of the most important Shinto shrines in southern Kyoto. It’s also the most important shrine dedicated to Inari, the Shinto god of rice. Foxes are believed to be Inari’s messengers, which is why you’ll find plenty of fox statues around the shrine. The main draw for tourists however are the thousands of vermilion torii gates that straddle the various winding trails around the main buildings. It’s an awesome place for photography enthusiasts, as long as you get there before the crowds…

Natadera temple is a beautiful sight at any time of the year, but no season does justice to this ancient holy site quite like winter. The temple is over 1300 years old, having been founded in 717 by a Buddhist monk who visited a nearby mountain in search of a goddess. Both the mountain (Mount Hakusan) and the temple remain the the region’s most popular sites of worship today.

Taketa means bamboo and rice field, and what better way to celebrate the city’s heritage with a bamboo light festival! The tradition was started in 2000 as a way of helping to regulate the rapidly growing bamboo that you can find all around the region, and the festival attracts tourists from all over the world who are keen to witness the 20,000 lanterns that go on display for three nights every year. The festival begins on the third Friday of November.

#10 The Pagoda Of Seigantoji And Nachi No Taki Waterfall

If you’re looking for ancient history combined with breathtaking scenery then don’t miss the Pagoda of Seigantoji. Located in Wakayama Prefecture, Higashimuro, the pagoda is three stories high and makes for an impressive sight by itself. But the fact that it sits beside Nachi no Taki, Japan’s talling waterfall, makes it even more spectacular! The waterfall is 133 metres high (over 430ft) and was the original religious site of the area, and it’s easy to understand why people chose to worship this awesome natural wonder when you see this magnificent sight for yourself. 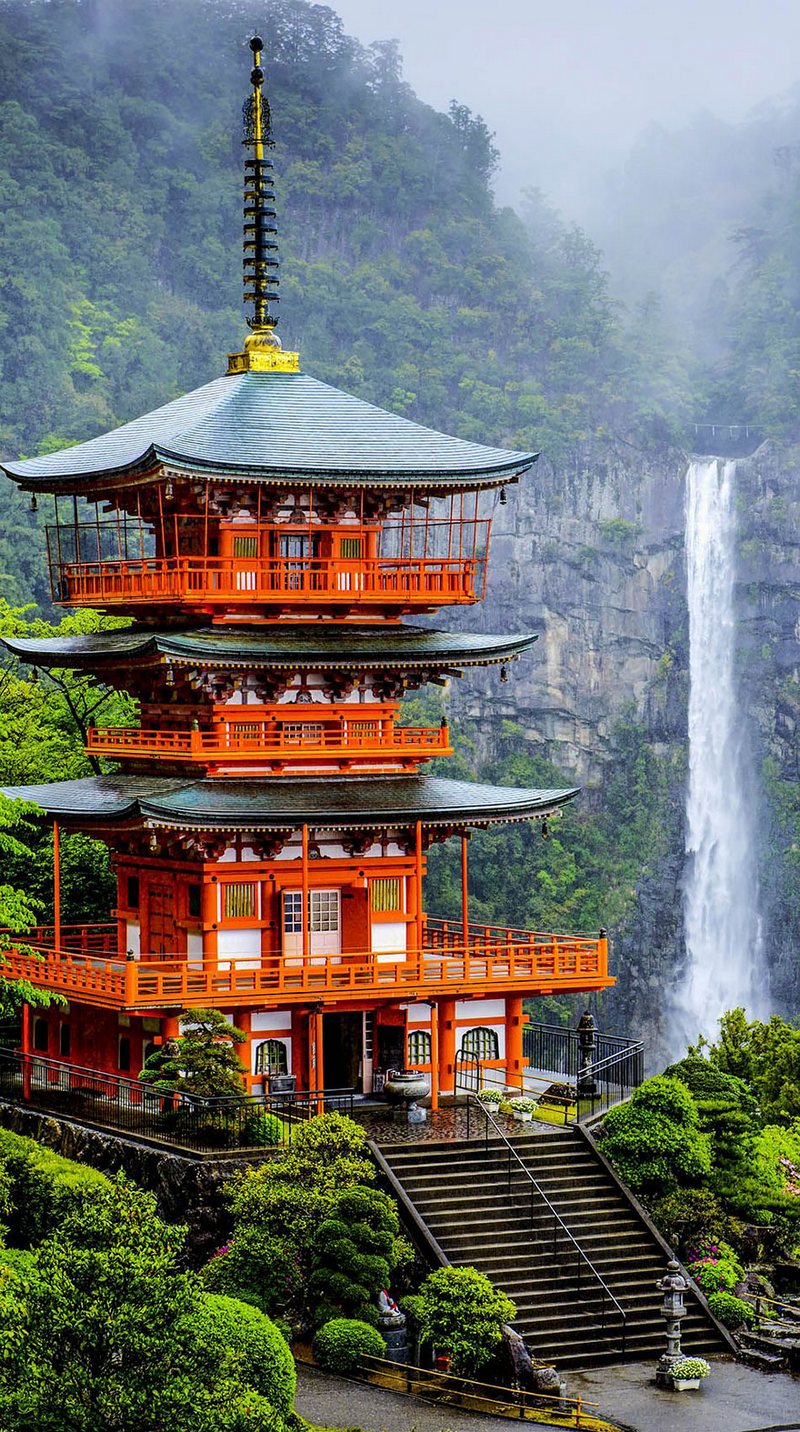 The Nakasendo Way is a walking route that begins in Kyoto and ends in Edo. Nakasendo literally means ‘the road through the mountains’ and it was an important transport route in the 17th Century. Now largely forgotten, the Nakasendo Way provides a pleasant, scenic walk though both the countryside and the history of Japan. The entire journey takes around 10 days is suitable for anybody who can comfortably walk for more than three or four hours at a time. Various tour operators offer packages including guides, food, and accommodation.

Whether the sun is shining or it’s pouring with rain, there’s always something to do in Osaka. the city is Japan’s second largest metropolitan area after Tokyo and is well known for its striking architecture, rowdy nightlife, awesome street food, and, of course, Osaka Castle. If the weather is bad then don’t worry because in the middle of the city’s main shopping district is Shinsaibashi-suji, a large covered shopping street where you can easily spend a few hours while you’re waiting for the rain to stop.

If you’re planning a visit to Japan then no itinerary is complete without a glimpse of the country’s most famous natural wonder. One of the best views of this spectacular mountain can be had from Chureito Pagoda, a peace memorial built in 1963. You’ll need to climb about 400 steps to reach it, but believe us when we say that every step is worth it.

Hokkaido is the second largest island of Japan. Situated in the far north, it’s a vast and relatively untouched wilderness approximately 40 times bigger than Tokyo but with only a third of the population. If you’re planning to visit this enchanting region then be sure to check out the Blue Pond (Aoiike), named so because of the natural minerals that turn the water into a beautiful blue lagoon. You can find it on the outskirts of Shirogane Onsen, a hot spring town in Kamikawa District.

Japan’s Cherry Blossom is one of the most spectacular seasonal sights that the country has to offer. Every spring the country turns into a huge bouquet of pastel colored petals, but if you want to witness it for yourself then make sure you time it right because cherry blossom season lasts only a few weeks. Fortunately there are several websites dedicated to monitoring each year’s blossom, so keep an eye on their updates in order to ensure your visit is perfectly timed.

You can see more Japan travel guide at here. 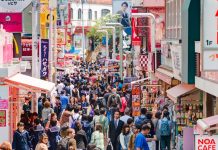 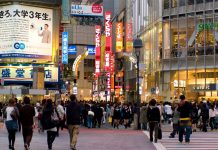 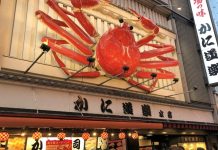