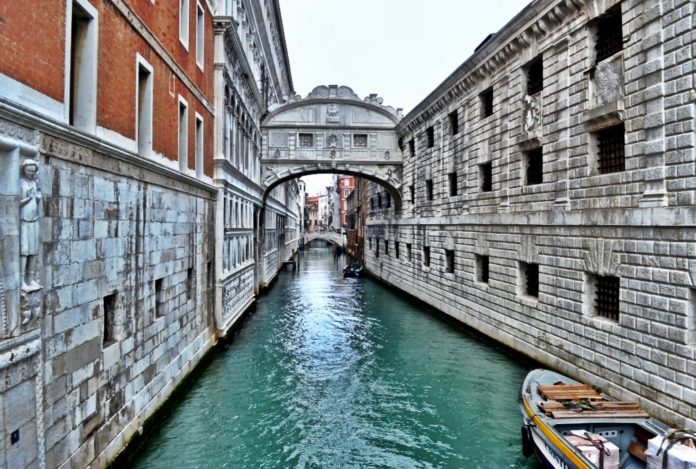 The Bridge of Sighs, which has the original name is Ponte dei Sospiri, is one of the most famous bridges in Venice, Italy.The Ponte dei Sospiri is designed with the beautiful curve, made of white limestone and has tiny rectangular windows that are covered with nets. In the 17th century, the task of the bridge was to take the prisoners from the interrogation room in the Doge Palace to the Prigioni Prison. 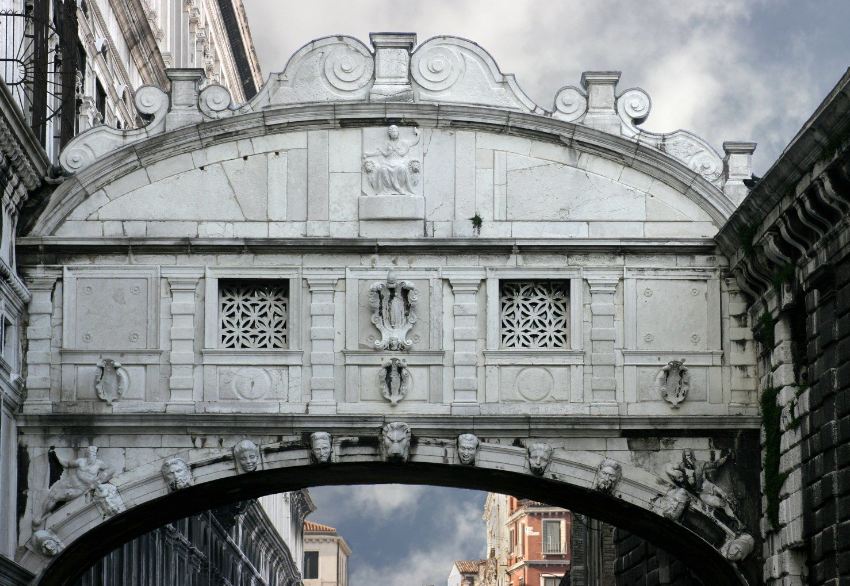 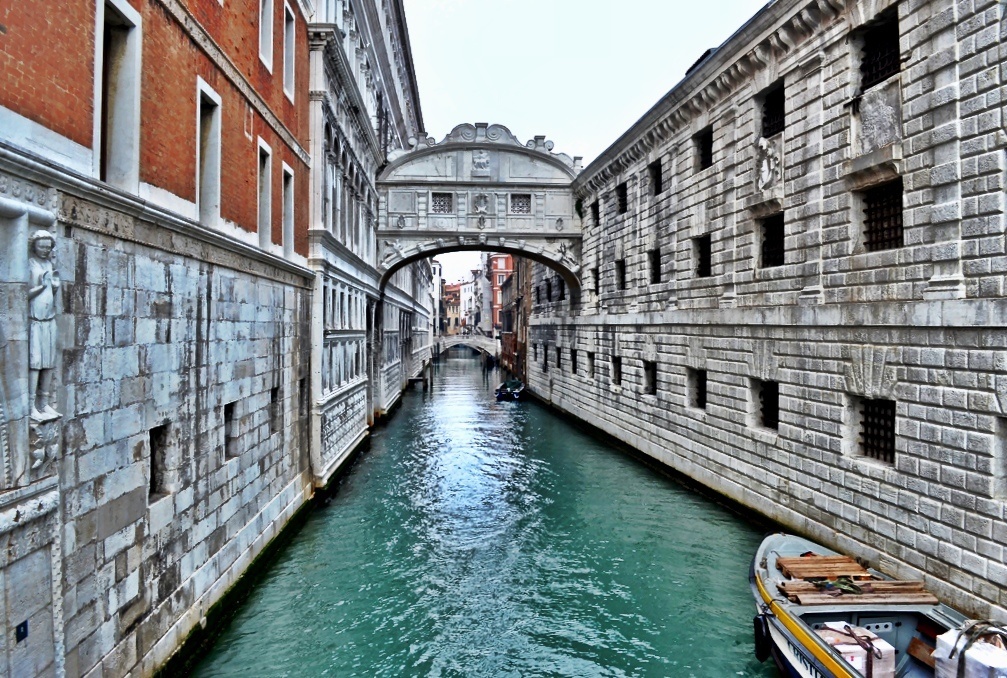 Why is it called the Bridge of Sighs?

Legend has it that when the prisoners were sentenced to pass through this bridge to the prison, they often looked at the last outside view through small windows. From here, they saw a beautiful world which was the contrast to the darkness they are prepared to face. Most of them let go of sighs. Therefore, Ponte dei Sospiri also has a different name, more famous than its original name: The Bridge of Sighs.

In addition, the bridge also carries another legend which is more romantic than prison scenes several times. Many people believe that, when the couples stand under this bridge and kiss each other on a gondola (a boat floating on a canal in Venice), they will have an eternal love affair. 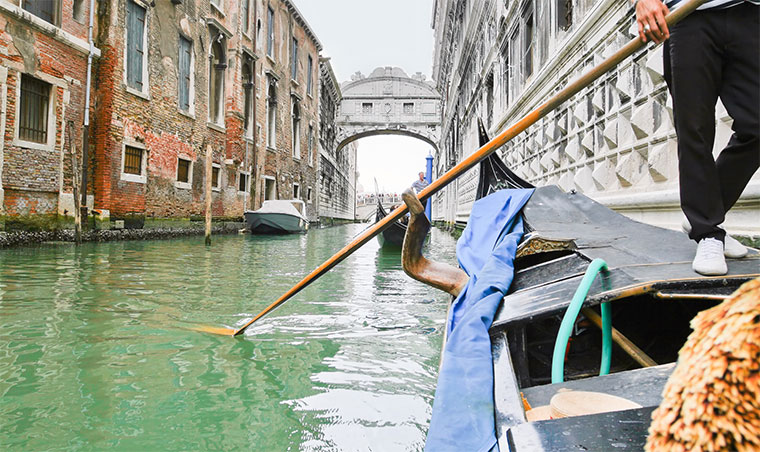 Today, the visitors to Venice often visit this famous bridge and take photos to save their memories. One of the architectural features of the bridge is that many visitors are curious about decorating many faces, but most are sad or angry faces and only a cheerful face.

Beside The Bridge of Sighs, the Doge’s Palace is also a popular tourist attraction today because it is home to many famous 14th century sculptures. Inside the palace, there is a solid prison system. The narrow lobbies with the wind, the furniture displayed in the cell are always wet which is also impressive to many visitors. 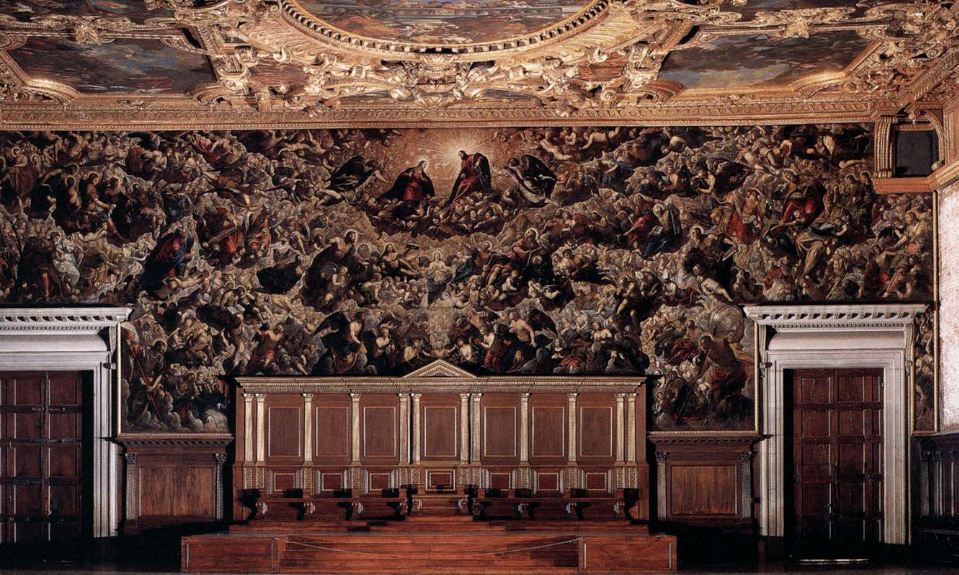 The story of “king of the girl” — Giacomo Girolamo Casanova

This prison is also associated with the famous fugitive of a prisoner nicknamed “king of the girl” – Giacomo Girolamo Casanova.

Giacomo was born in Venice in 1725, in a family of six siblings. His mother was an actor and his father was a dancer. When Giacomo was born, the Republic of Venezia was in prosperous times. Therefore, this is a tourist destination of wealthy men. Casinos and prostitutes are a distraction that attracts guests far away. And of course, Giacomo is also affected by that.

With a clever and wise personality, Giacomo loved very early and was dubbed the “king of the girls, when the number of his mistress up to 122 people. In 1755, Giacomo came to a rich merchant to marry her daughter. In response to the proposal, the trader immediately brought her daughter into the monastery and denounced Giacomo. After this incident, the “killer king” was convicted and imprisoned in prison.

Here, Giacomo got together with the prison guards, bribed the prisoners and made a spectacular escape. He emerged from the gloomy Dorge Palace, running across the Bridge of Sighs. When standing on the other side of the bridge which was not far from the prison, Giacomo thought about the day he had crossed the bridge and looked at his last freedom and then smiled. Then, the “king of the girl” called a boat and ran to the other shore. As the sun rose, the water in the canal began to color and Giacomo knew that it was the most beautiful dawn of the coming free world.

Are you looking for more Venice travel guide and top things to do in Venice: Tours, activities, attractions and other things? Read more: Venice travel blog — The fullest Venice city guide for a great trip to Venice on a budget for the first-timers.