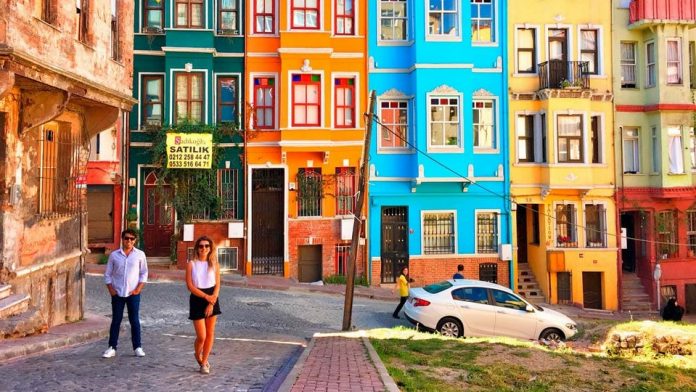 The narrowest strait in the world with a width of only about 700m – 3.400m and was voted by Business Insider magazine as one of the 50 places to visit once in a lifetime. The city of Istanbul is built along this legendary strait.

Blue Mosque is the largest mosque in Turkey and also the symbol of the city of Istanbul. The reason for its name Blue Mosque is because the mosque is paved with 20.000 blue glazed bricks. The Blue Mosque is open to tourists with free of charge, but it remains a sacred place of worshipping.

Therefore, before entering the mosque, you will have to take off your shoes, women visitors will have to wear a headscarf.

Getting there: A 2-min walk from the Hippodrome of Constantinople

Used to be the largest Orthodox church in the world for 1.000 years. After being invaded by the Ottoman Empire, Hagia Sophia was converted into a mosque and then a museum later. Hagia Sophia is free to all visitors. Similar to the Blue Mosque, when entering the mosque, you need to pay attention to take off your shoes and women need to wear a headscarf. 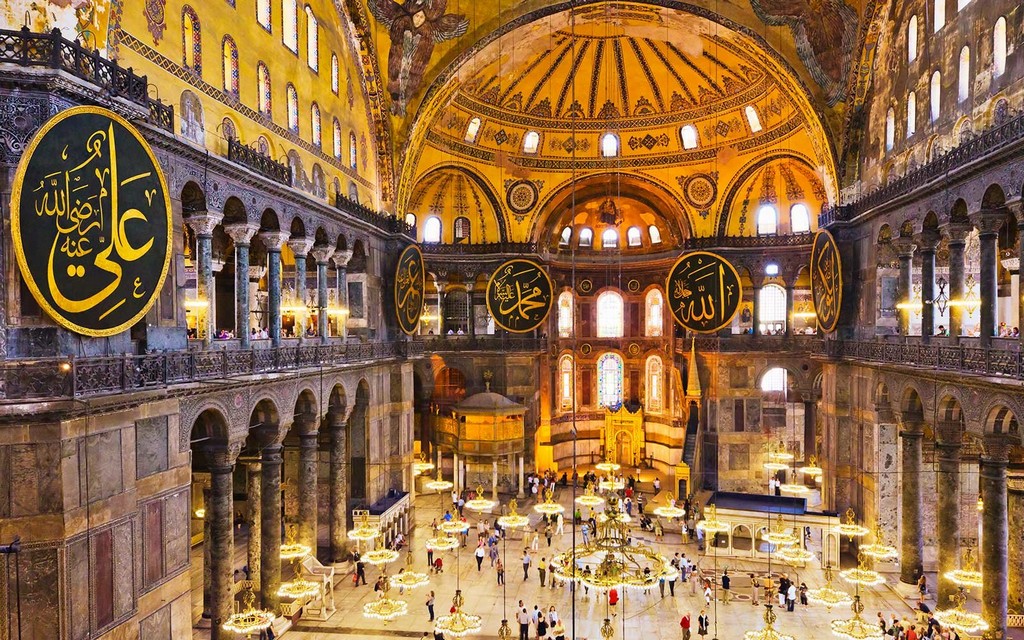 Basilica Cistern is known by various names such as the Subterranean Palace or the Sunken Palace. In fact, this is an underground water tank system that provides clean water for the people of Istanbul from ancient times. The most notable thing is the upside-down Medusa demon head of its stone pillar located inside Basicila Cistern.

Where to go in Istanbul: Buyuk Mecidiye Mosque (Ortakoy Mosque)

It’s a colorful old town. The name Balat was originally adapted from the Greek word “palation” which means “splendid palace”. The houses in Balat are built with traditional architecture style, simple but extremely beautiful and colorful. 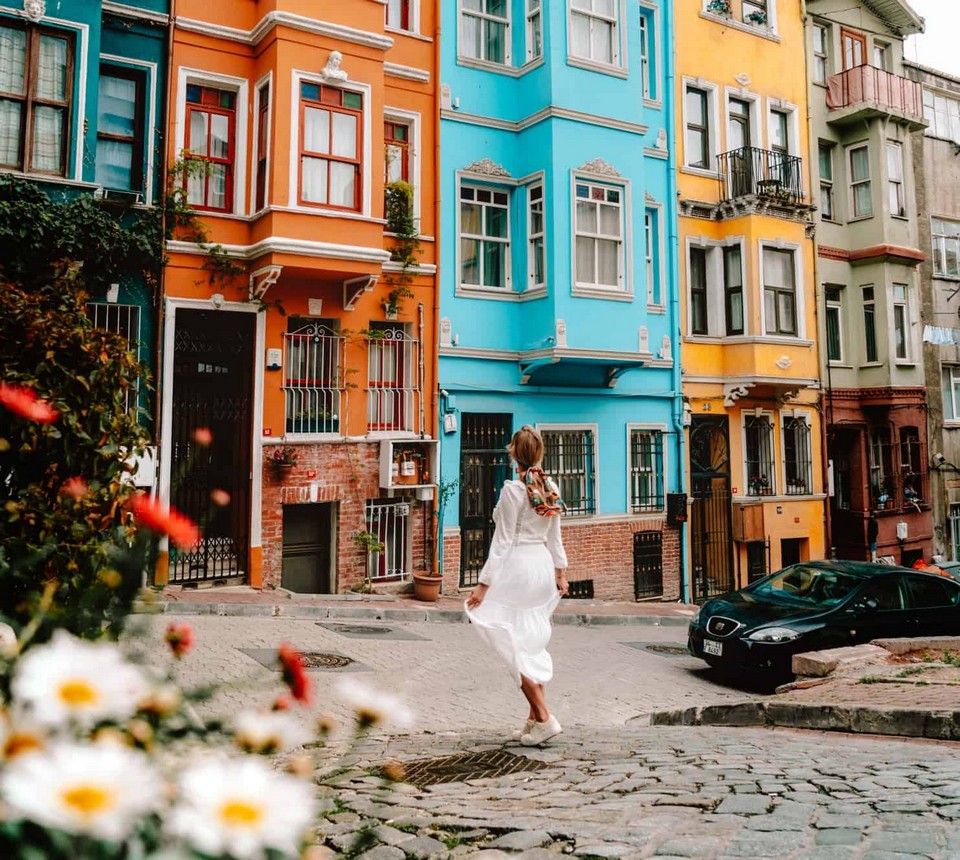 Grand Bazaar is the oldest market (bazaar) in Turkey as well as in the world. It was built in 1455 of the 15th century and this name in Turkish means indoor market, just like the unique architecture with massive scale and countless stores of this market.

Contrary to the time-tinted beauty of the old quarters above, Taksim area brings the breath of modern life. When night falls, Taksim becomes very crowded, bustling with lots of shops, restaurants and bars.

In addition to attractive tourist attractions, must and best places to visit in Intanbul above, below are some useful Istanbul travel tips that help you planning a wonderful trip to Istanbul.

Delicious dishes to enjoy when traveling to Istanbul

Before traveling to Turkey, I also read reviews and had many different compliments and criticisms about this fish sandwich, but when I came to Istanbul, it may be because I was lucky to choose the right restaurant, so it was extremely delicious and I loved this dish. The restaurant we ate name Derya Kafeterya and the price was 15 TL for 1 serving of fish sandwich. You can also find this speciatly at stalls along Galata bridge.

One of the most popular sweets in the country, it can be found in any Turkey’s city, at sweets shops, street food stalls or at markets. This is one of the oldest candies in the world. The shop we often visit is Mado. This is a very famous chain store, so you can easily find it anywhere. The beautiful and colorful sweets, make me remind to Macron when we went to magnificent Paris.

It’s like you’ll pay to be tricked. The seller will do all sorts of things, swinging back and forth so that you can’t get the ice cream. And will only stop when you get bored. The ice cream taste is quite strange and chewy, there are also many different flavors for you to choose from such as vanilla, green tea… of course it’s not as delicious as gelato.

Price: 30 TL. The price is a bit high but you should definitely try it because the feeling of being tricked is quite fun.

There are many types of hotels and accommodations for you to choose when traveling to Istanbul. You can go here to choose the most suitable hotel.

If you have a good budget and want to stay in a hotel with a nice view, you should highly consider the 5-star CVK Park Bosphorus Hotel Istanbul with a beautiful view of the Bosphorus, Golden Horn, Topkapi Palace, Prince’s Islands. In addition, the InterContinental Istanbul hotel which overlooking the sea, Bosphorus and Taksim Square is also enchanting.

Some notes before you go

Buy a Turkish SIM Card at the airport: Price 250 TL, if you go with 2 people, you can share the internet with each other. There are two popular telecom service providers in Turkey that you can choose from: TurkCell and Turk Telecom. We bought a TurkCell sim that can call and text quite comfortable with 25 GB of data.

You should choose to land at Istanbul Ataturk airport

Istanbul Ataturk Airport (the new Istanbul Airport) is still in the process of being completed, but it is expected that by 2025, after completion, it will become the largest airport in the world. You can choose to land or fly back from this airport to take advantage of the large space with spectacular architecture and its estimated total construction cost of up to 12 billion dollars.

Money exchange (Turkish Lira) for use in Istanbul

You can use international credit cards to pay at some supermarkets or big restaurants, but most of Istanbul still uses cash (including taxis), so it’s best to exchange money in advance for convenience. You can also exchange at money exchange counters at the airport.

Beware of scam of taxi drivers / driving around to increase fares

Taxis in Istanbul mostly run based on meters. The fixed list price is 4 TL for the starting point and 2.5 TL for each kilometer traveled. Short trips will charge a minimum of 10 TL. However, the most common scam is taking passengers around to increase the fare. We were once cheated by a taxi driver by swapping the bill we gave (200 TL) into a 20 TL and said we still underpaid and asked for more (taxi fare was 50 TL).

We are also lucky to have a local friend, so whenever we take a taxi and see signs that the driver intentionally lost the way, we will call her to demand justice immediately. In the above money-swapping case, after seeing us taking proof pictures and saying that we would report to the operator, the driver automatically returned to pay and said it was a mistake (?!).

When shopping in Istanbul, especially in markets like the Grand Bazaar, don’t forget to bargain because if you have good negotiation skills, you could also get a much discount.

Some best day tours, trips, activities and transfer services, tickets in, from and to Istanbul you can refer to

Are you looking for more top things to do in Istanbul: Tours, activities, attractions and other things? Let’s check it out here. And My trip to Istanbul — Explore the bridge city of Asia and Europe. And Turkey travel guide here.