Loy Krathong, which takes place in November, is as old as Thai heritage and represents a close bond between Thai culture and the supernatural world. The participants ask water spirits to take away their troubles in their krathongs, which are containers traditionally made from banana leaves. Now, let’s discover the traditional Loy Krathong festival in Chiang Mai, Thailand.

“It will be very crowded tonight, so we have to set off early. We’d better go together so as not to get lost” Karin,the curator of our course said.

At 8:00pm, two songtaew ( a popular form of transportation in Chiang Mai, Thailand) waited for our group consisting of 20 people. We were going to Mae Jo university where thousands of lanterns (khom loy) would be set adrift at the same time, marking the opening of the Loy Krathong Festival.

Loi Krathong is traditionally performed on the full moon night of the twelfth lunar month, which usually falls on some day in November. The offerings are made to Mae Khongkha – Mother of Waters in an expression of gratitude for providing life-sustaining water.

Some believe that by setting the krathong adrift, one symbolically casts away one’s grief and ill-fortunes. There are bizarre tales of the superstitious, placing tufts of hair or clipped finger-nails into the krathong in the hope of ridding themselves of a spell of bad luck or misfortune.

The place of the festival could be recognized easily with many lanterns and flower shops on both sides of the street. Karin asked us to find our way back to the parking lot, in case someone got lost. We found a good spot on a vast lawn of Mae Jo school. Everybody laid a mat and enjoyed fried rice and fruits while we waited. 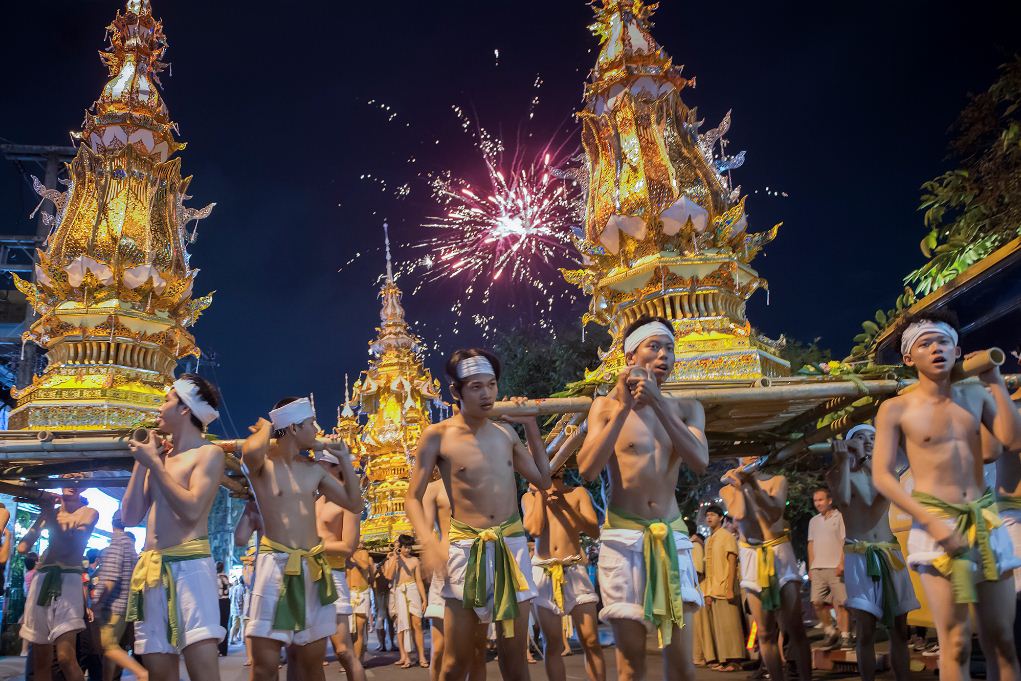 It was windy and clear. The moonlight got brighter and brighter. The crowd was full of foreign tourists. We had a drink, took pictures and talked to each other until prayer time. The crowd sank into silence, only the sound of prayer from the monks could be heard. In the quiet atmosphere, a firecracker sporadically exploded. A khom loy sometimes flew up on the dark sky. Regardless of language barrier, I could feel a solemn atmosphere and respect of worshipers towards Buddha. 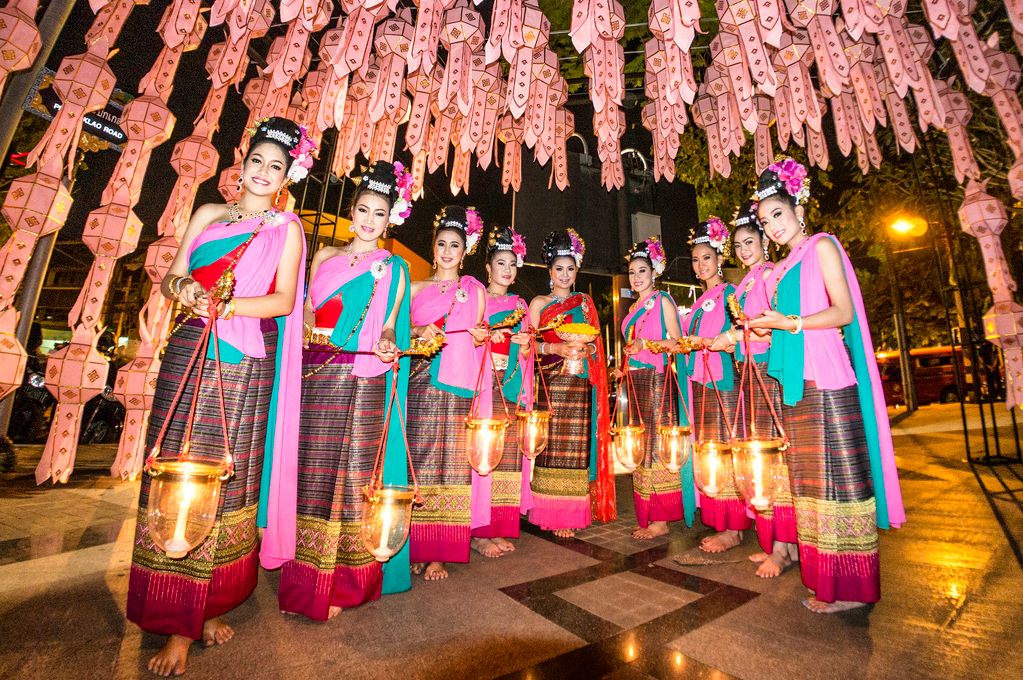 The prayer ceremony lasted about 30 minutes. At 9:00pm, the most-anticipated moments came. The volunteers of the festival started to set fire to all the lanterns. Karin told us that only by being set on fire can the prayers come true. Each group of three or four people lifted a khom loy and set it afire. When the flame was strong enough, I felt a force pushing the lanterns upwards. We made a small circle around the lanterns to feel the warmth and peace. 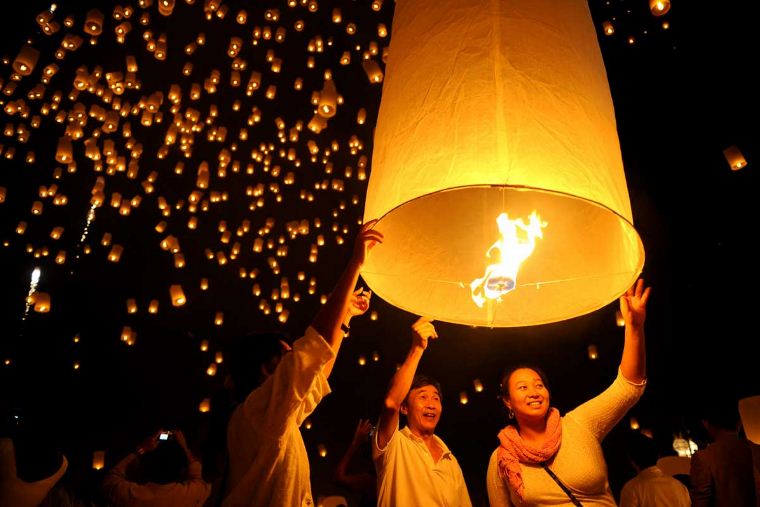 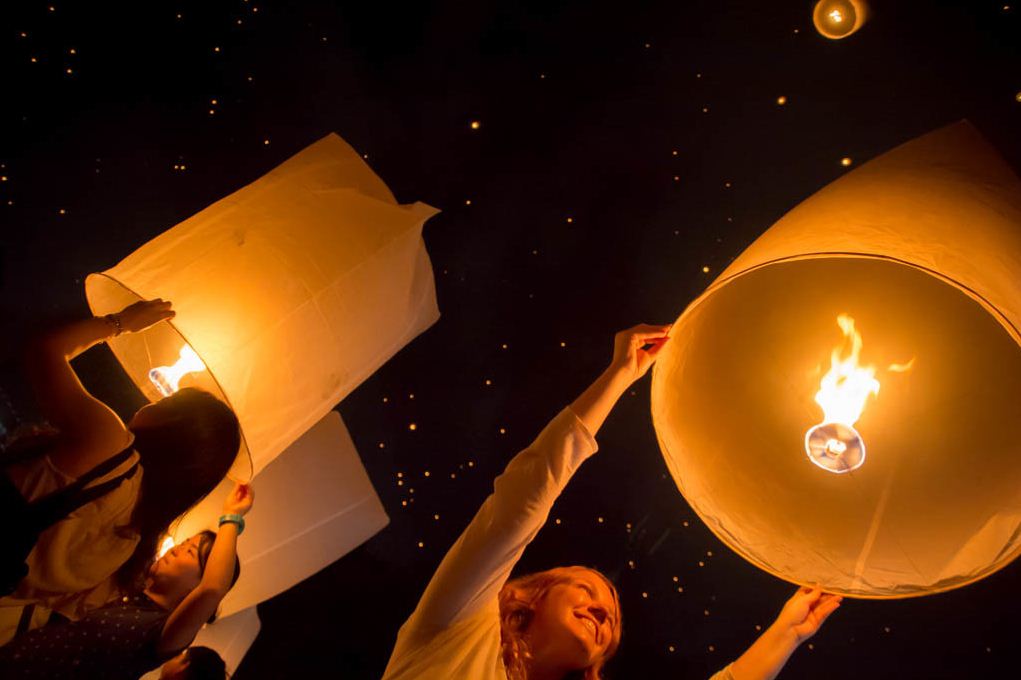 “One, two, three!” After listening to the command, the whole crowd set thousands of khom loy adrift at the same time. People applauded and exclaimed with excitement. For the first time witnessing such a spectacular view, we were overwhelmed by the flying flickering lanterns which carried people’s wishes and hopes. I kept looking up at the flying glittering floats and colorful fireworks and asked myself when I could experience in this atmosphere again. 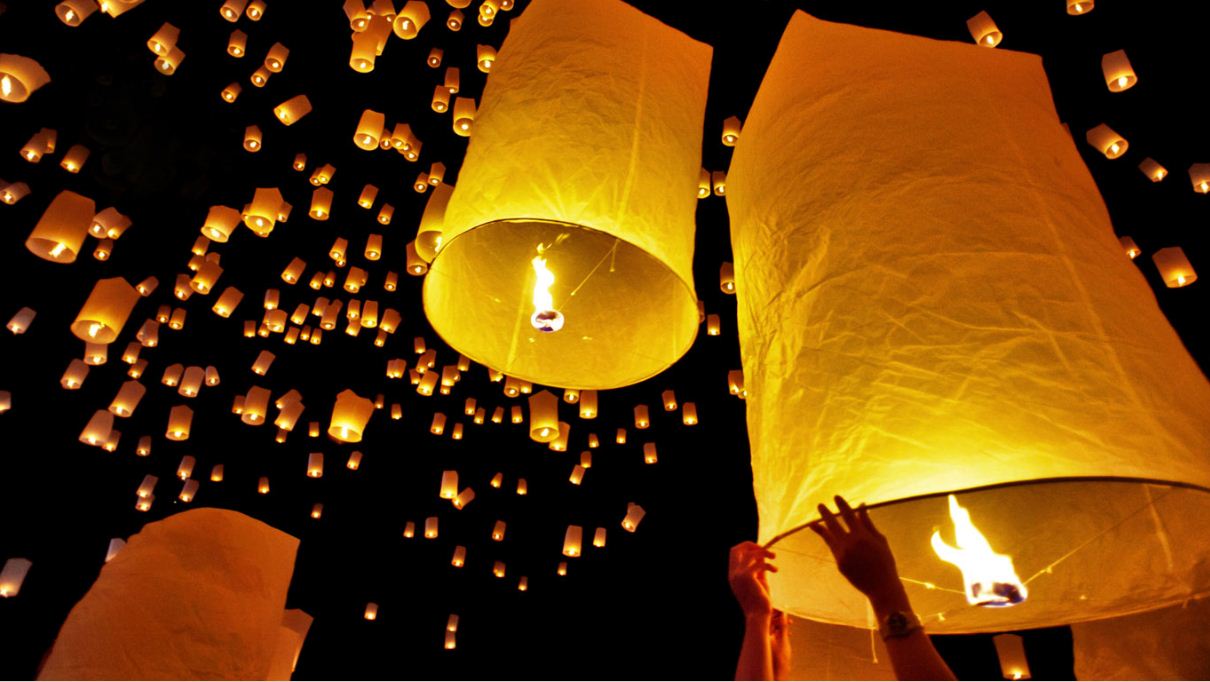 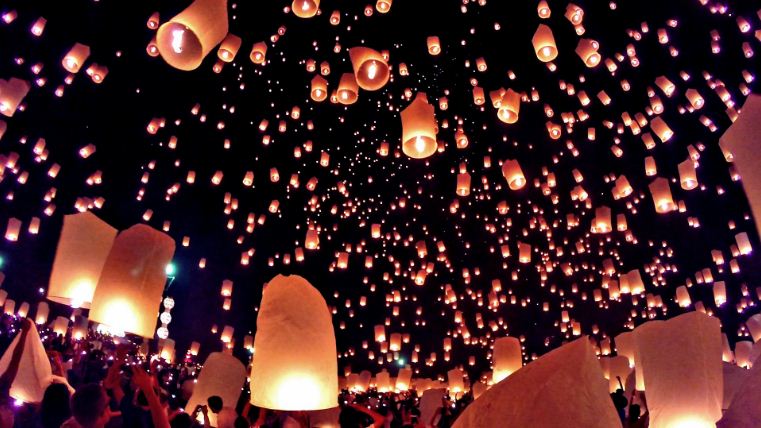 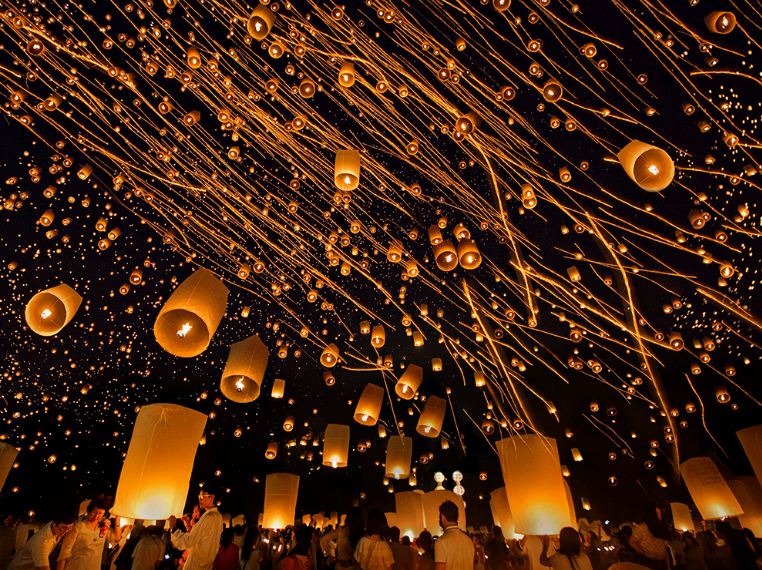 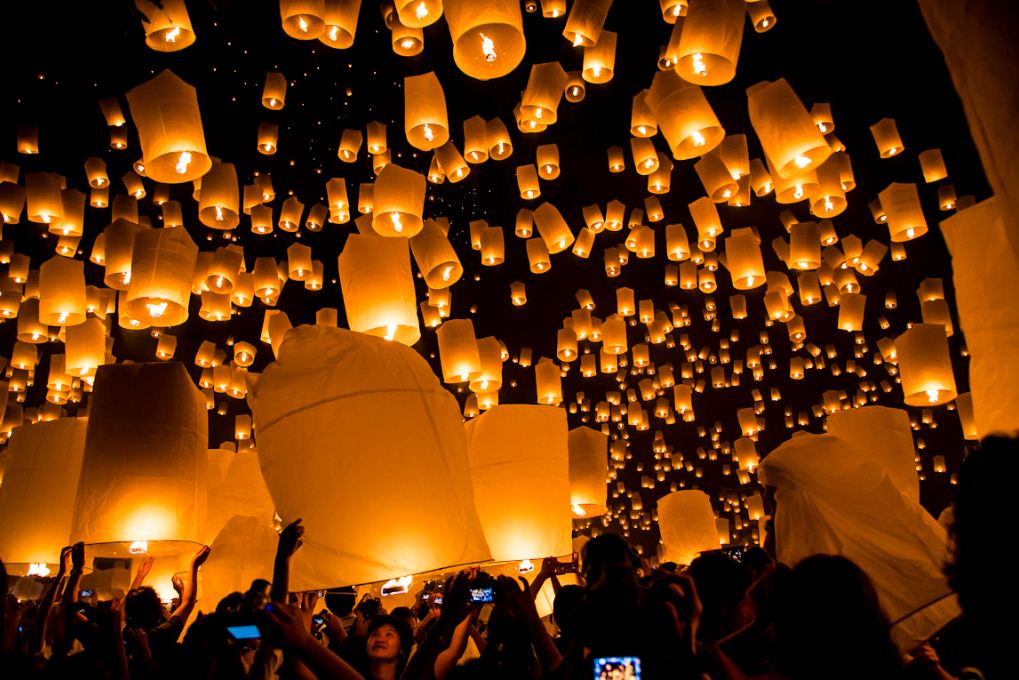 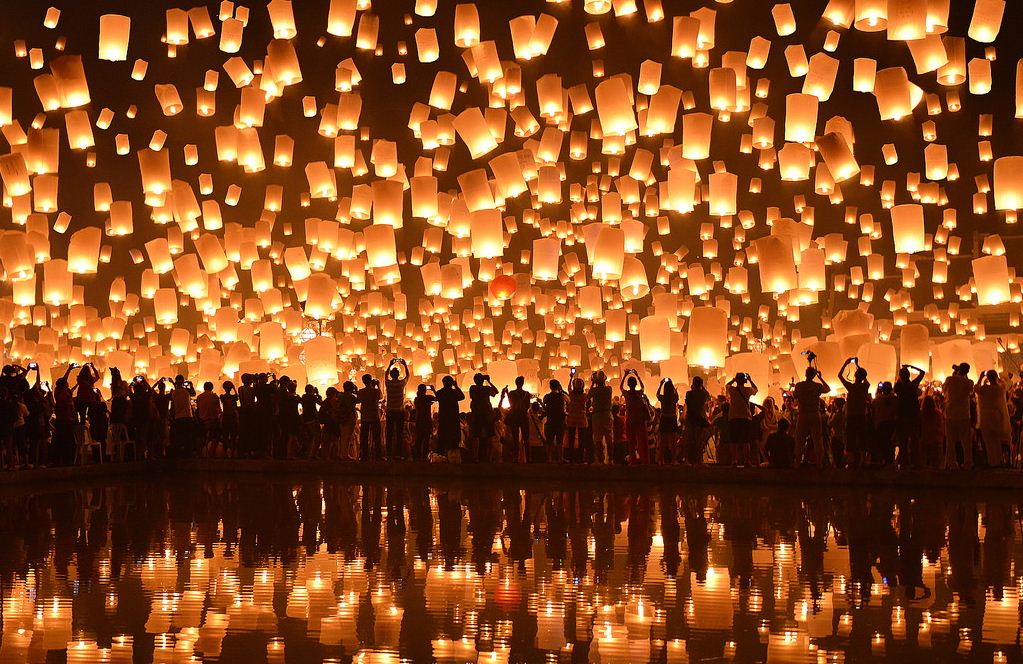 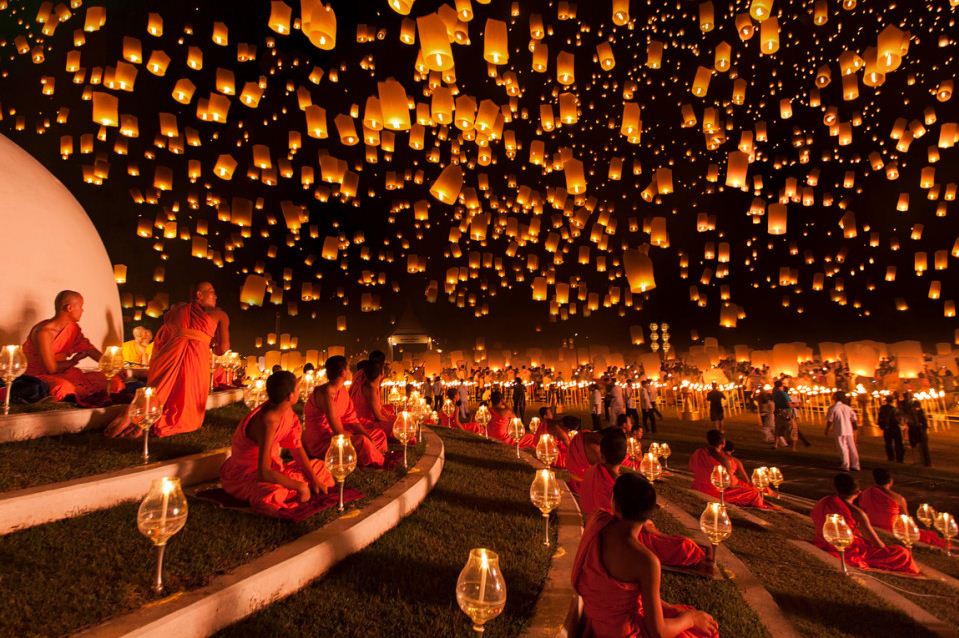 The Light on Sacred Water

One week later, at the end of Loy Krathong, we viewed the floats released in rivers and waterways. The old quarter in Chiang Mai is only for pedestrians. We felt as if we were enjoying Tet in Vietnam with the lighting of fireworks. The banana-leaf floats appear as long chains of hundreds of glittering lights on the Ping River. At dusk, the krathong is decorated with fresh flowers, candles and incense sticks. The float is then taken to a waterway where the candle and incense sticks are lit and the krathong is set adrift. 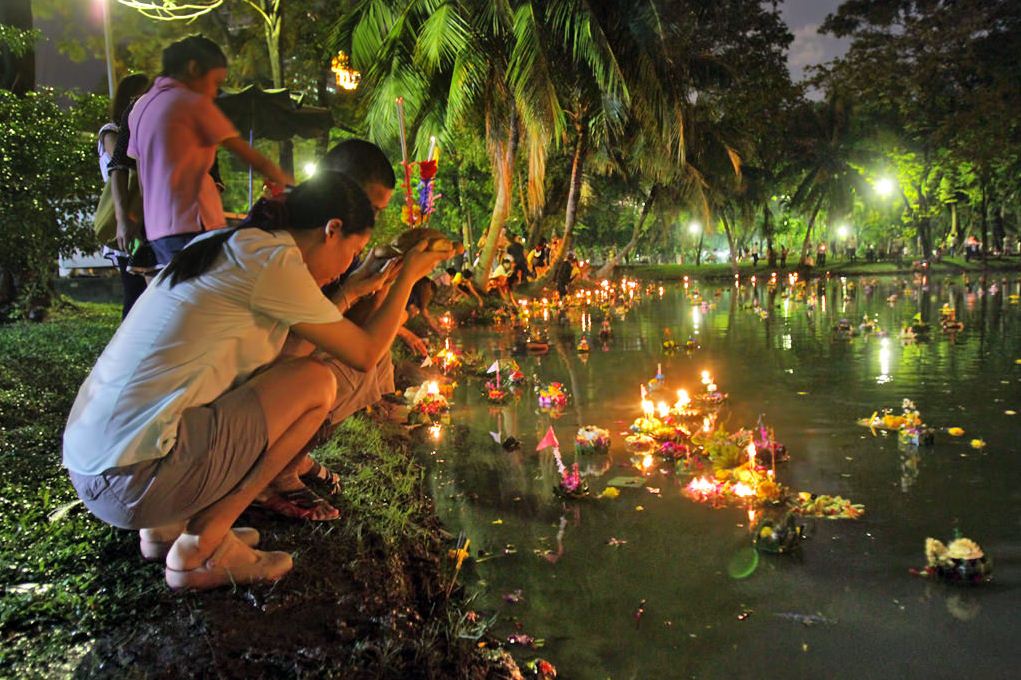 Although the political situation is in turmoil, people here enjoy a peaceful life. Coming to this place, the land of happiness in the middle of November, you can join in on this exotic festival. 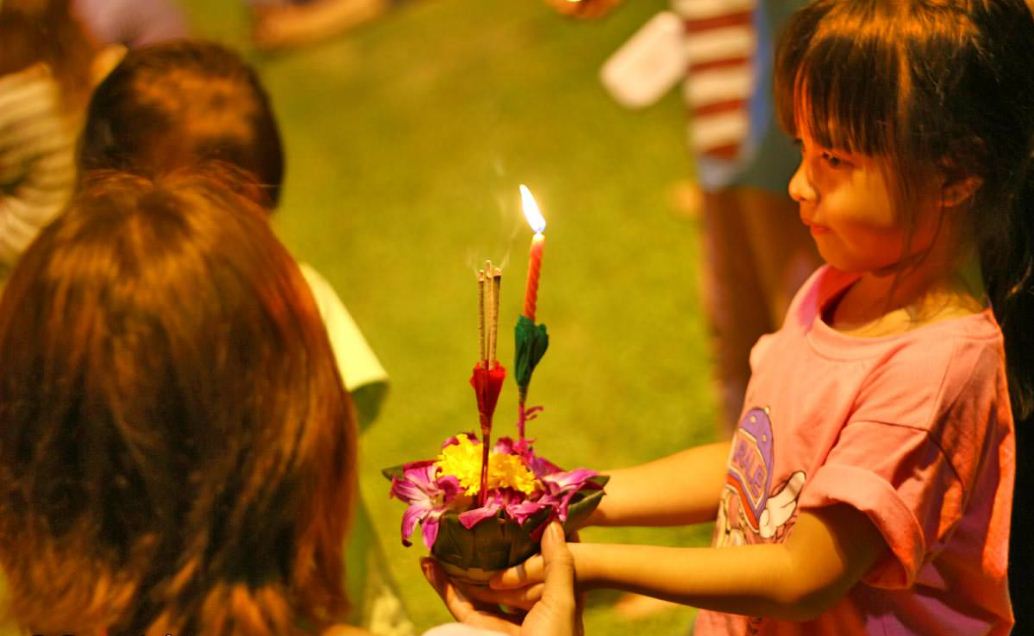 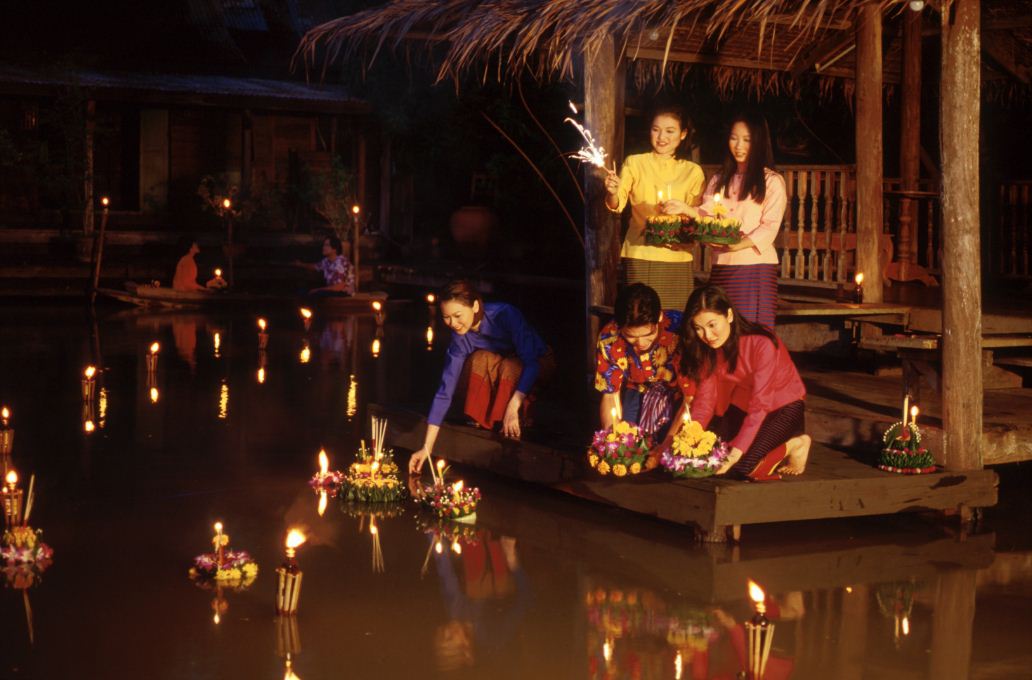 The Loi Krathong Festival is celebrated nationwide. The dates depend on the moon calendar. In 2017 the dates are November 2-4. The full moon day is November 3. The festival is one of the most spectacular in Thailand. Chiang Mai is a great place to experience the Loy Krathong Festival.

Please note: Below program is based on programs of the past years. A final program and more detailed will be published later in 2017. We will keep you updated.

We have a Loy Krathong package available.

Some best day tours, trips, activities and transfer services, tickets in and from Chiang Mai you can refer to 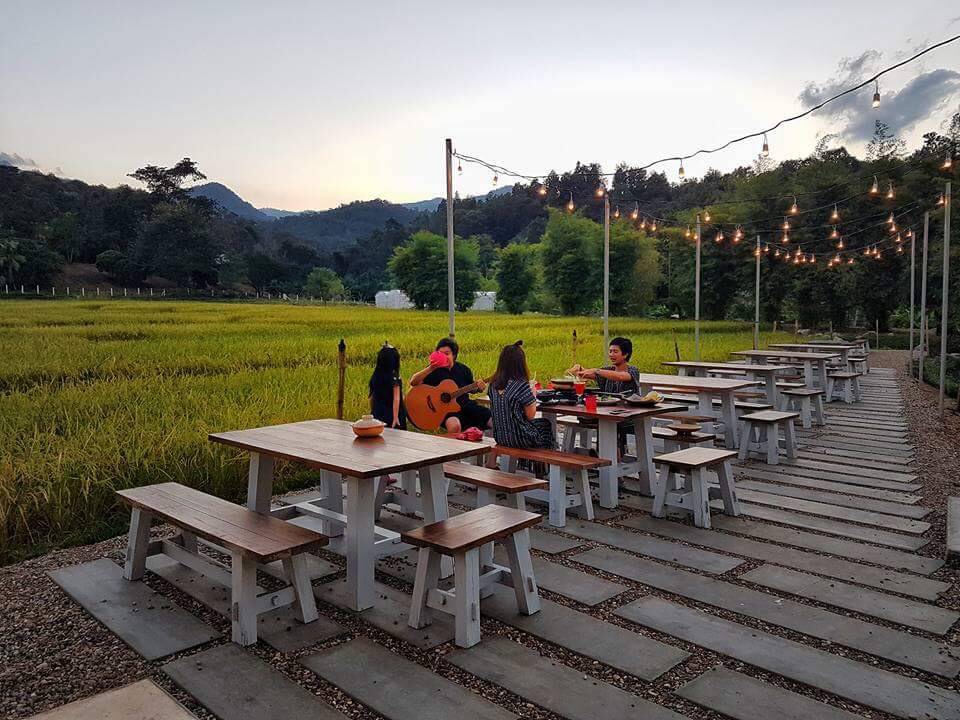