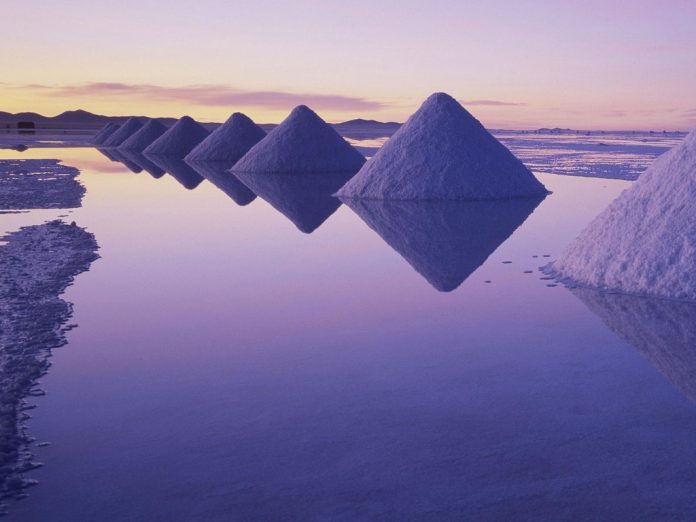 Unless you’re an astronaut (if you are – can we be friends?), most of us will never walk on the moon. But on the Bolivian Altiplano, you can get pretty close. Rocky desert forests, pockmarked roads leading to wind-whipped towns, salt pans spiked with cacti, geysers belching sulphur… the landscape here doesn’t have your usual boring terrestrial vibe. No siree.

Empty, haunting and spectacular, the laws of earthly physics bend on the Salar, especially in the wet season when the salt is covered with a thin layer water, reflecting the sky back at itself like a cosmic mirror. Lakes are pink, horizons are more an idea than a line, and scale is yours to play with. David Lynch would feel right at home here. So would Salvador Dali.

Spanning over 12,000 square kilometres, and heaving with around ten billion tonnes of salt, Salar de Uyuni is the world’s largest salt pan. It was formed when Lago Minchin – a prehistoric lake once covering most of southwest Bolivia – dried up. Beneath the thick salt crust are huge reserves of lithium-rich brine.

In fact, up to 70 per cent of the world’s lithium is mined here. Surrounding the Salar are other natural wonders of the Altiplano – snowcapped volcanoes, hot springs and mineral-packed mountains. The surreal, sparsely populated landscapes of the region have become one of Bolivia’s biggest draw cards, with hundreds of thousands of tourists visiting each year.

Should I do a tour?

The best way to see the Salar is on a guided 4WD tour with six or seven other people. While it’s possible to do day tours across the salt flats, most trips run for 3 or 4 days and head deeper into the Altiplano. The price should include a driver, guide and cook (often combined into one talented human), food, transport and basic dormitory-style accommodation. Avoid tours that spend a night in a ‘salt hotel’ (yep, hotels made of salt), as these run off the water grid and pollute the local environment.

The leaping off point for most tours is the dusty Bolivian town of Uyuni, but you can also depart out of Tupiza (although this adds an extra day of travel onto the trip). Another option is to start in the backpacker hamlet of San Pedro de Atacama in Chile – a good option if you’re travelling north, rather than south – although expect to pay more for basically the same itinerary.

There are plenty of tours to choose from, especially in Uyuni (where you’ll be swamped on arrival by touts), but some are safer and better run than others. Make sure you know what is and isn’t included in the tour, that your vehicle is equipped with seatbelts, emergency radio transmitters and a first aid kit, and that your guide and driver have the proper qualifications. And while it may seem obvious, double check that they’ll be speaking a language you understand!

For tours departing from Uyuni, first stop is usually the ‘train cemetery’, where families of geriatric locomotives rust slowly in the sun. You’ll spend most of the first day on the vast Salar, passing salt-mines and visiting Isla Wasi – a rocky, cactus-covered island erupting from the monotonous salt crust like a hallucination. Over the next few days you’ll head into the Andean Desert to see coral-like rock formations, geysers, hot springs and milky mineral lakes. Keep an eye out for llamas, flamingos, vicunas and foxes.

Intrepid offer a range of trips across the salt flats, both as short, dedicated tours and as part of our greater Bolivia andSouth America adventures. Unlike most tour companies, some of our trips visit the Coquesa Caves at the foot of the Tunupa Volcano, which are home to ancient ceramics and a mysterious family of millennia-old mummies.

The flats are accessible year-round. From May to November, the weather is mild and clear, but the salt pans are baked dry, so there’s no mirror effect. From January to April, during the summer wet, the flats are sheeted in water; while mostly drivable, access to Isla Wasi can be impossible.

How to get there?

If you’re on a budget, night buses run regularly from La Paz to Uyuni, but be prepared for a very bumpy (and dusty) ride. The bus arrives around 8am, and most tours don’t leave Uyuni until mid-morning, so you should have enough time to grab a coffee and walk around. Buses also operate out of Potozi and Tupiza. Alternatively, you could organise private transport, or catch a train from Oruro or Villazon. Intrepid flies directly to Uyuni from La Paz, saving you time and eliminating the inevitable sleep loss an overnight bus delivers.

When planning a trip to the salt flats, it’s important to remember that as they sit at over 3,650 metres above sea level, some people can suffer from altitude sickness. If you can, plan to spend a few days in La Paz to acclimatize beforehand.