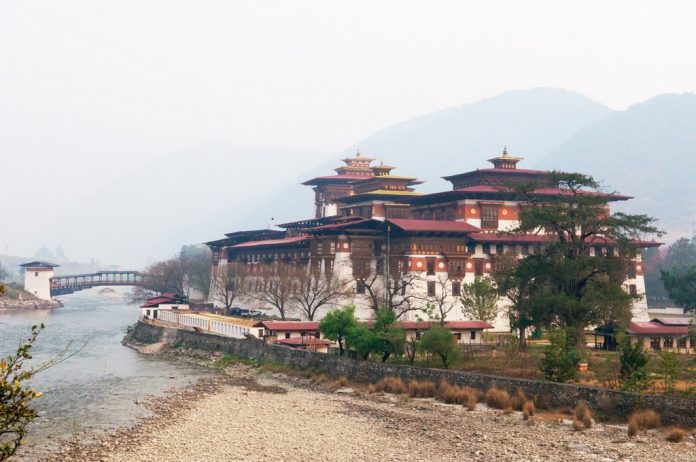 “Whenever anyone asks me what Bhutan is like, I find the best way to describe it is like Narnia: it is so remote and unlike anywhere else on Earth that I’ve visited. And then I implore them to visit before it is too late, before it all inevitably changes.

“Bhutan is one of the last Kingdoms left on earth and describes itself as the happiest country on the planet, and I have to say from what I saw, they pretty much have it right. The country’s wealth is measured by the peoples’ happiness, not its GDP (they call it Gross National Happiness) and the citizens are incredibly well looked after by the state. Crime levels are low, graffiti and rubbish non-existent. The people have to wear traditional national dress at all times, which results in an explosion of colourful outfits wherever you go. My jeans put me to shame.”

“I visited to coincide with the famous Paro Tshechu festival which includes days of traditional dances acted out for visitors who come far and wide in their best dress. Aside from the many stunning temples and breathtaking scenery, the best thing of all for me about Bhutan was the warmth and beauty of the people, which is what I spent most of my time trying to capture. It’s truly a unique place to experience. “

Prayer flags in the wind

A young nun at the entrance to a temple

Religious candles burn in a dzong

A joker (Atsara) mask on sale for the Paro Tshechu Festival, used to entertain the crowds

A festival-goer with her young child strapped to her back

Young boys watch a game of football from a monastery window

A giant thangka (embroidered painting) of the Guru Throngdel

Prayers held in front of the Throngdel

A little boy plays with a piece of string

A masked performer does a traditional dance at the festival

Crowds at the festival in their best outfits

A young nun amused at having her photo taken

A giant statue is paraded around the festival

All images belong to Margot Raggett. You can view more of her work at margotraggett.com. Read more Bhutan travel guide at here.