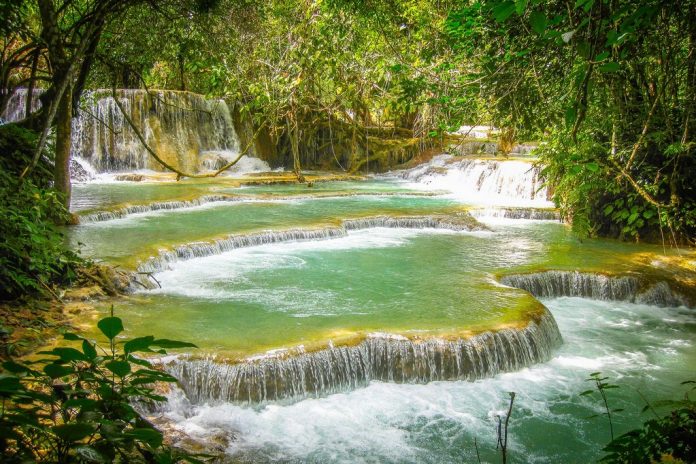 Laos travel is probably the most obscure place on the tourism map of Southeast Asia. However, this land is small but full of wonders. Places introduced below will prove for that. Let’s explore!

Located approximately 155 kilometres north of Vientiane Capital of Laos on the road to Luang Prabang, this small town is covered by the vast acres of green mountains. Vang Vieng is known as the tranquil countryside with fresh and cool air. Why is it the famous tourist attractions of Laos beautiful country? Amazingly, No splendid buildings, no modern resorts, no spacious stone streets exist. Nevertheless, every year, a huge number of tourists are appealed to Vang Vieng, which is as many times as the number of 50,000 locals.

Thanks to the advantage of ideal terrain, the small town’s striking river landscape lined with towering karst have lured travellers. Despite being known as a peaceful countryside on the edge of Nam Song River, this small town also has a wild character.

How to get to Vang Vieng

The lake is situated 30 kilometres north of Thakhaek town, Khammouane province, with bright green and crystal clear watercolor. The luminescent green waters spring from a subterraneous river that filters through the limestone located around the mountain. The area near the viaduct, visitors are allowed to bath and swim. Alternatively, you can go for a stroll relaxingly on the track through the forest.

How to get to Khoun Kong Leng Lake

Getting to Khoun Kong Leng Lake is quite challenging in itself, and a local guide is essential, Go north from Thakhaek on Route 13 to Km-25, turn right along a dirt road and go approximately 2 km to a major junction where you must turn right. Continue along this road for 16 km, climbing several steep hills and passing through several small villages before finally arriving at Ban Nakheu Village. Here ask permission from the local village authorities before proceeding to the lake, which lies another 1 km further along the dirt road. It is advisable to travel by tractor, off-road to Ban Nakheu with the Provincial Guide Service on the Phou Hin Poun 2-day Trek.

Bulky and golden Pha That Luang stupa in Vientiane capital is an important monument and great pride of the citizens of the “Million Elephants country”. Built on the foundation of ancient Khmer temple in the 16th century, this great temple still preserves the diverse architectural as well as the halo despite experiencing ups and downs of history.

How to get to Pha That Luang

If you are staying in Vientiane, getting to and from Phat That Luang is very easy. You can choose to walk, grab a tuk-tuk, or go along with a tour group. Everybody will know where it is and it is easy to get to by foot with a map. It is located on That Luang road.

The best time to visit Pha That Luang

The Boun That Luang Festival is held every November in the capital of Vientiane. The festival lasts for three days and nights and is considered the holiest Buddhist holiday in Laos. The main event of each Boun That Luang Festival is held at the temple, where everyone is allowed to pray and give their respect to the stupa while enjoying the colourful parades, live music, and various religious ceremonies.

Kuang Si is a complex of three waterfalls, which the main cascade’s height is 60 metres. It’s interesting to contemplate the dramatic scene of the water pouring down from above. As Kuang Si waterfall is one of the most attractive tourist destinations of the country “Million Elephants”, you will have the chance of visiting the mountains, climbing, showering, and bathing. Besides the fresh air of Kuang Si, you also can hear the birdsong mixed with the smooth music of the waterfall, creating a wonderful harmony. This makes you feel cheerful and relaxing .

How to get to Kuang Si Waterfalls

Getting to Kuang Si is easy. Just pick up the tuk-tuks from the center of town in Luang Prabang. They depart anytime you want and cost around 30-40,000 kip. Make sure you plan your day to allow for at least four hours at the falls. The entrance fee is 20,000 kip ($2.50 USD).

The Plain of Jars

30 kilometres around Phonsavan town, the administrative center of Xieng province, the Plain of Jars is located on a wide flat country. However, due to the influence of landmines left over after the Indochina war, only a part of the Plain is revealed to visitors and researchers. The plan was discovered by the scientists more than one century ago, but until now, the origin and use of the jars remains a mystery.

How to get to The Plain of Jars

It’s easy to hire a taxi (4WD and driver) from Phonsavan to the jar sites or visitors can catch a local bus to Site 3 but not site 1 and 2.

Tham Khoun Xe cave, also known as Xe Bang Fai river cave, is an immense river cave located in Khammouane province in Central Laos. The cave was discovered by a group of French explorers in 1905.

According to the report of the expedition, Tham Khoun Xe cave is an underground section of the Xe Bang Fai River and one of the largest river caves in the world. With the height of 120m and the weight of 200m, Tham Khoun Cave is one of the biggest river caves in the world. Also, the geological structures here are very impressive that will win your eyes from the first sight.

In the cave, there is a good green forest thriving at the entrance to the cave. The green color contrasts with white, orange color of the terraced fields, creating a unique, exquisite array of colors on the limestone walls.

The Xe Bangfai River-cave is not recommended to enter be- tween June and October due to dangerously high flows, but the village is still open for other itineraries, as well as homestay and lodge services. Road access is difficult during the wet season, however, there is boat access from Ban Pakphanang to gain year-round access.

How to get to Tham Khoun Xe cave?

Xe Bangfai River Cave is about 150km East-south-east of Thakhek. Motorcyclists must be aware that the roads are mainly unpaved and suitable only for experienced riders.

Si Phan Don means 4,000 Islands, a destination that any visitor won’t miss when arriving in Laos. Mekong river at this stage is the widest with nearly 14 kilometres and about 4,000 islands. Si Phan Don gives travelers a beautiful water-color painting.

Visiting Si Phan Don, you will definitely want to spend 24 hours on exploring on the four-wheeled vehicle or boating downstream and watching rare Irrawaddy pink dolphins. Then sit on the hammock leisurely and enjoy Laos renowned beers.

How to get to Si Phan Don

The most typical cultural works of Champasak is the grandiose Wat Phu shrine – the World Cultural Heritage. About 40km south of Pakse, along the banks of the Mekong River, Wat Phu is the complex of a stone monument and an architectural marvel. It was built over the centuries from the 9th century to the 13th century. Moreover, it is considered as one of the most sacred temples of the ancient kingdom in this land.

Wat Phu has the Hinduism architecture style, worshipping Shiva god. Its architecture is close to the World Cultural Heritage Site of Angkor Wat in Cambodia.

Opening Hours: All year round

How to get to Wat Phu?

Pak Ou Caves is located north of Luang Prabang, on the Mekong River’s Basin. Therefore, you can travel by road or waterway. It is famous for Buddha sculptures. Although the sculptures were largely damaged, the surrounding scenery is indeed worth exploring.

How to get to the Pak Ou caves

The most fun way to get to the Pak Ou caves is by boat. The trip takes around 2 hours upstream from Luang Prabang with magnificent scenery along the way of the Mekong river and the limestone mountains. The way back downstream takes a little over an hour. At some of the boats, it can get noisy near the back, where the engine is.

Boats leave Luang Prabang from the boat dock at the Mekong riverside near the end of the peninsula. Boats leave at 8.30 am, the fare is 75,000 Kip (about US$ 10). Many of the boat operators stop at the “Lao Lao” whisky village, where you can try several tastes of locally made whisky. If you have a group you can charter a private boat, which should cost between 300,000 and 350,000 Kip (US$ 39 to 45) depending on your bargaining skills and season.