It took us about one day through forests, streams and a lot of rainy weather to reach Son Doong- the biggest cave in the world located in the National Park-Phong Nha, Ke Bang, Quang Binh province. Although we were just able to visit one part of the cave, we felt satisfied and proud to be one of the first Vietnamese amateur cavers to enter Son Doong.

On April, the 22nd 2009, Son Dong Cave in National Park Phong Nha, Ke Bang (Quang Binh) was recognized Earth’s largest known cave passage by The British Cave Research Association. At 262-by-262 feet (80-by-80 meters) in most places, the Son Doong Cave beats out the previous world-record holder, Deer Cave in the National Park Gunung Mulu of Malaysia. After one year, the scientists confirmed that Son Dong Cave is at least 8, 5 km long, 200 m high, even up to 250m

Phong Nha, Ke Bang welcomed us by a heavy rain. The path through a dense and moist primitive forest was covered by strata of leaves which prevented the sunlight from piercing the ground. Everyone walked in silence, step by step on the slippery and muddy ground with many terrestrial leeches. After a 1.5 hour trek through the forest, we reached the Rao Thuong stream. In the dry season, the water flowed calmly; the rocks emerge in the current. From here, the path along the stream was flatter and easier. 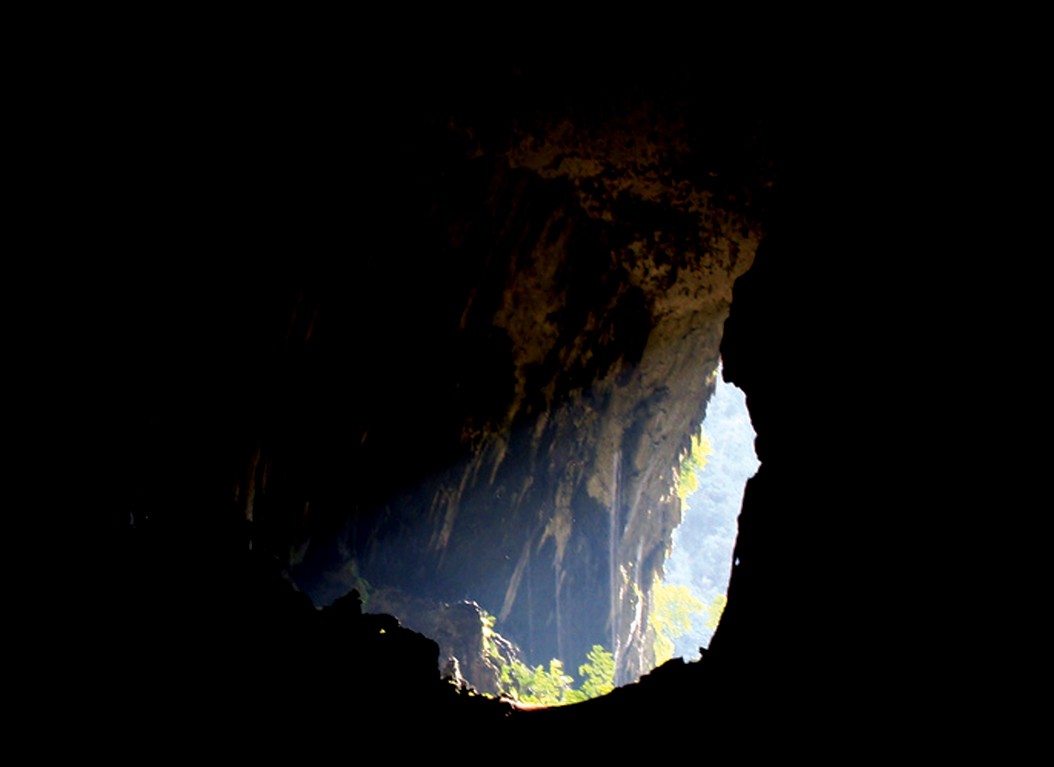 Walking a half an hour more, we dropped by Doong village, 6 households of Van Kieu ethnic minority group scattered in this secluded mountainous area. The children sitting on the thatched roof house looked strangely at us. We went on walking 3.5 km to come to En (swallow) Cave- our first night’s stay on the way to Son Doong. We walked through the forest of bananas, weed, gynura crepidioides, colocasia esculenta and laportea. The wild bananas grew so densely that we had to cut them down to find the way. The morning rain brought cool air but turned the ground into sticky mud which prevented us from moving several times. 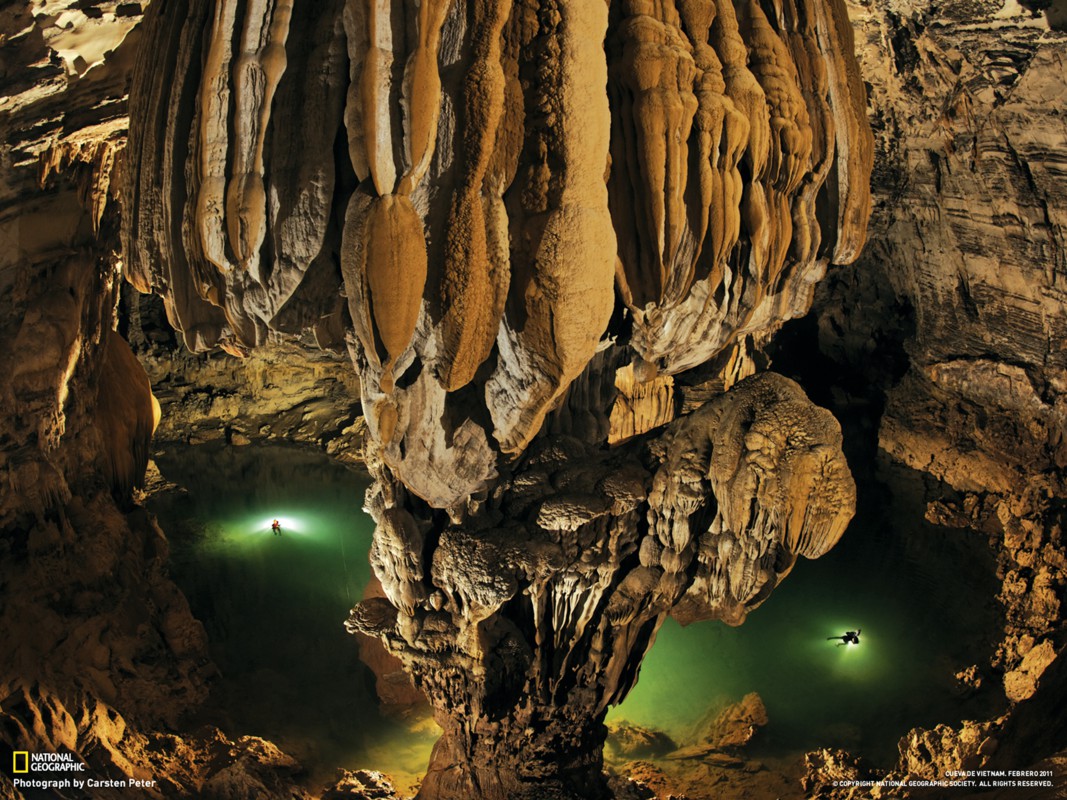 We kept walking until we saw the entrance of En Cave hidden on the distance. The stream was crooked, and then disappeared inside the cave. While we were still unfamiliar with the dark, a flock of butterflies came out, surrounding the strange visitors as if we were lost in the Nederland of fairytale stories.

After having dinner and sleeping in the tents inside the Cave, we carried out our journey on the following day to reach Son Doong. It was expected to be more difficult but more exciting. Indeed, on this day, we could explore two caves, namely En Cave with the biggest entrance and Son Doong- the world biggest Cave. 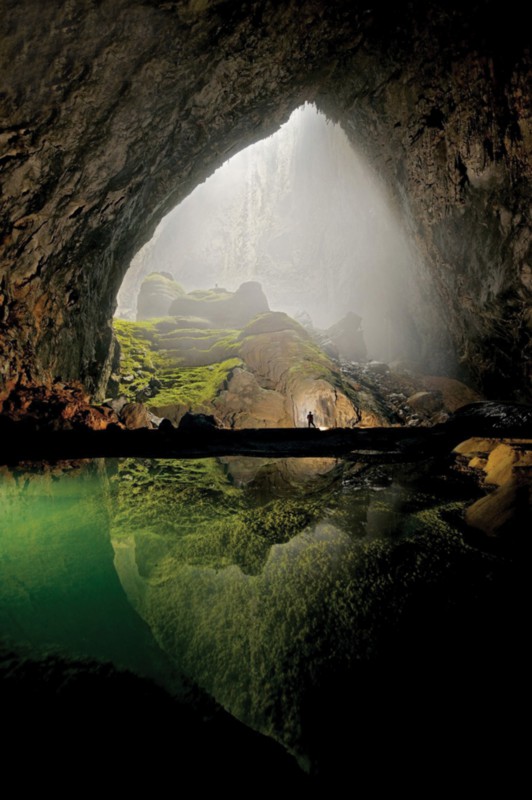 We followed the stream to go inside Hang En, climbed the rock field and passed the smooth sand. We could not remember how many times we waded through stream in the middle of the cave, and then climbed up and down the walls. We were tired, making efforts to pass a quite high stone slope when we saw a dazzling light ahead. It was the entrance of En Cave, 78 meter in height and 70 meter wide. Above the cave was flocks of swallows flying up and down and singing cheerfully. Beneath, the people who reached the entrance became the tiny black dots on the sparkling rocks under the sun. 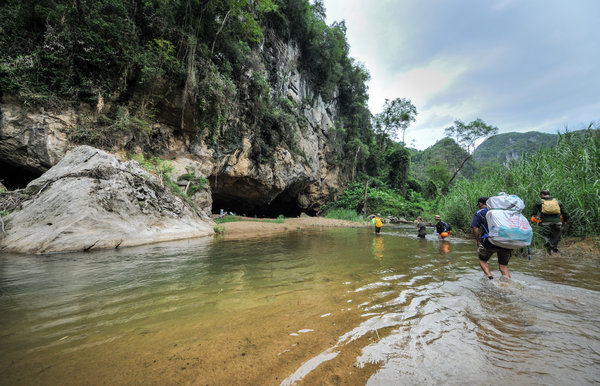 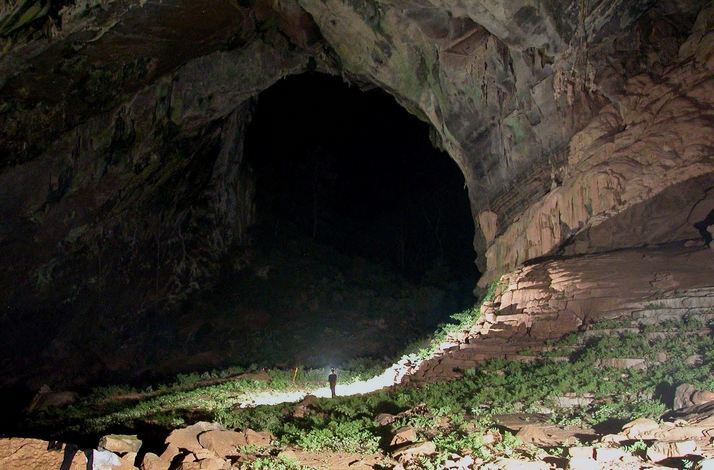 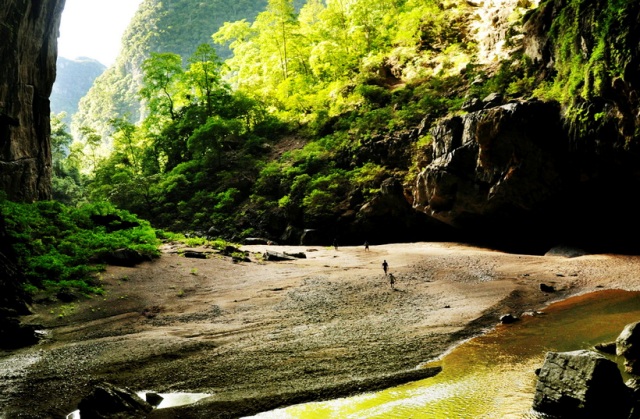 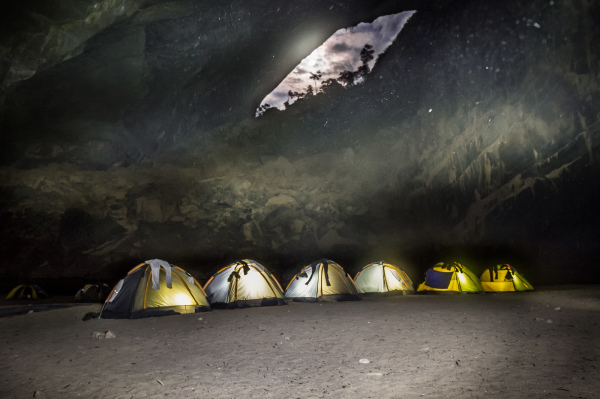 After Hang En, the path to Son Doong got more adventurous with dense forests and high, slippery slopes. The streams got deeper and the current became stronger. The rock cliff got narrower, thus we had to trek carefully. Our big backpacks were sometimes stuck. The slopes were very high, muddy and slippery with only a skinny ladder to climb. 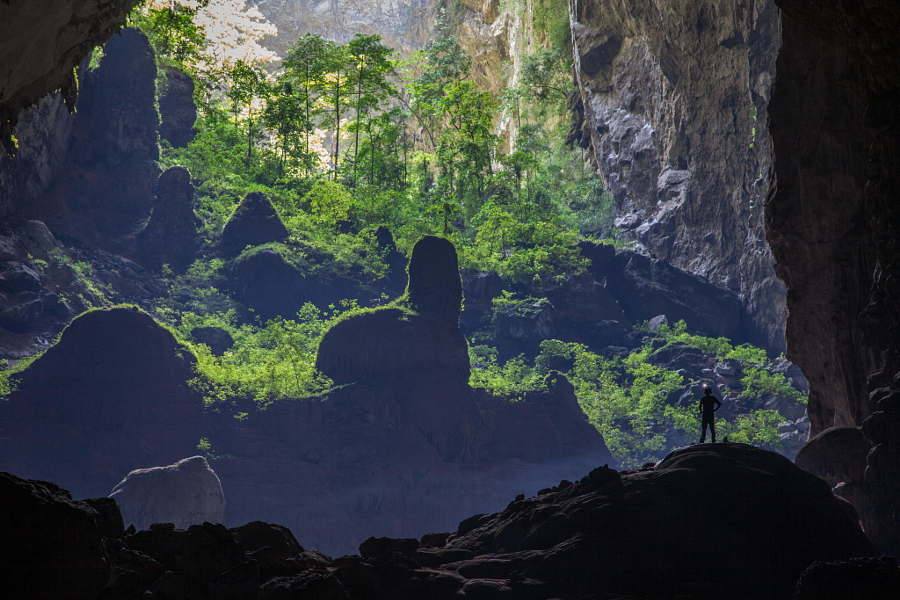 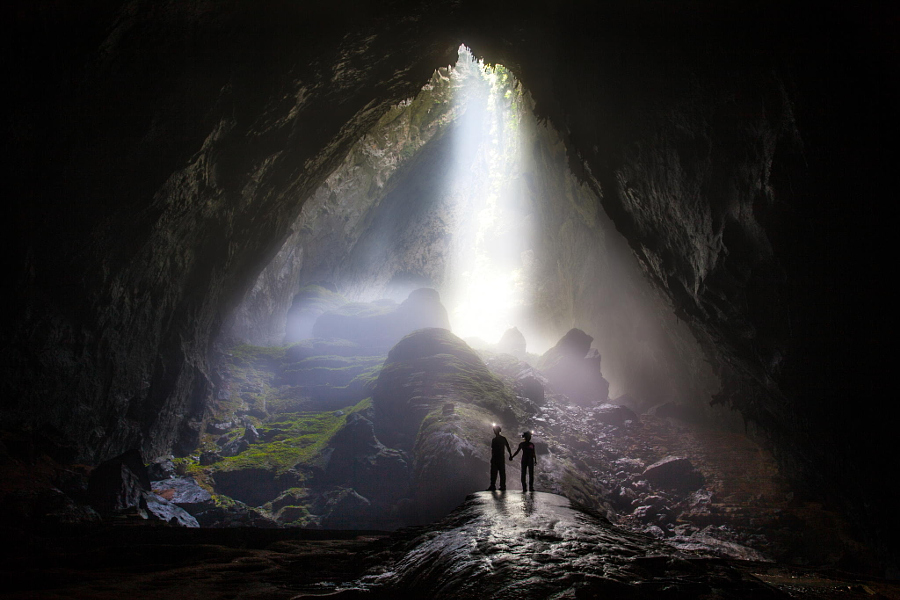 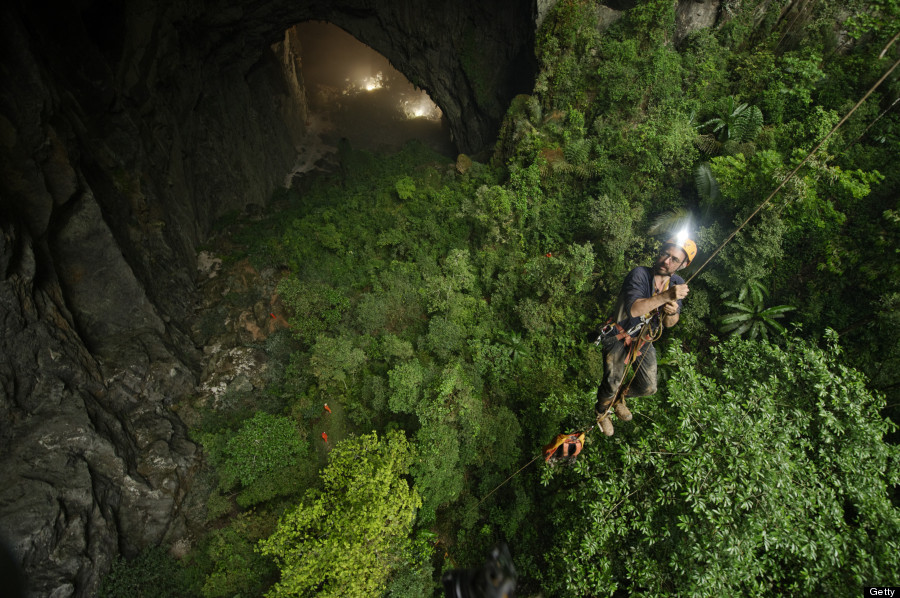 After two hours of overcoming the sheer and sharp canyons, we came to the cave entrance. It was smaller than we imagined. It was mossy, foggy and somber. After preparing ropes and flashlights, we went down the steep entrance. We felt nervous upon setting the first steps inside the world’s biggest cave.

The cave bed opened widely, the giant stalactites appeared under the dim light of flashlight. When passing by a twist, we heard the running water echoing more clearly, and impetuously. It was a rough small stream with white foam blocking the way. Without a rope, we had to cross the stream by holding hands and walking carefully on slippery big cobblestones in the middle of the river bed. 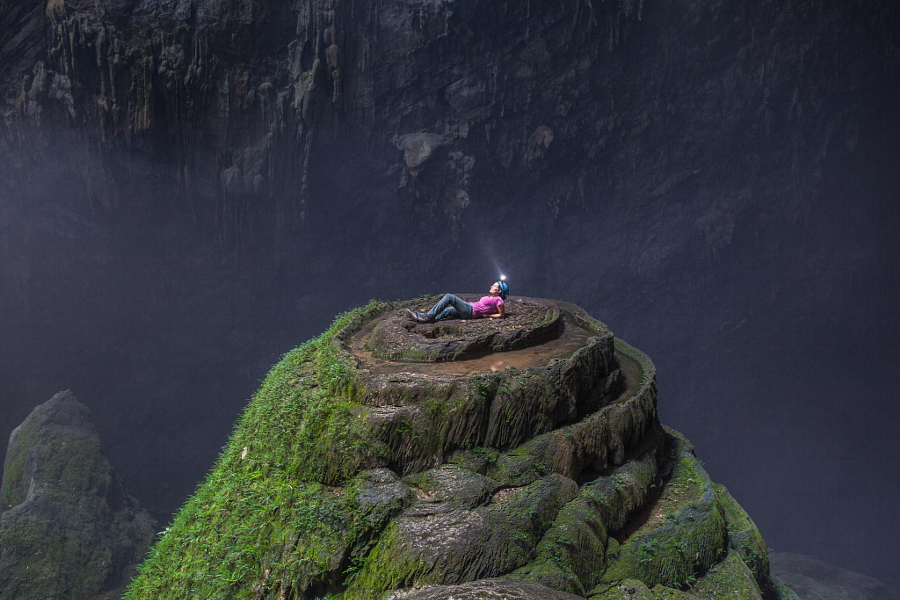 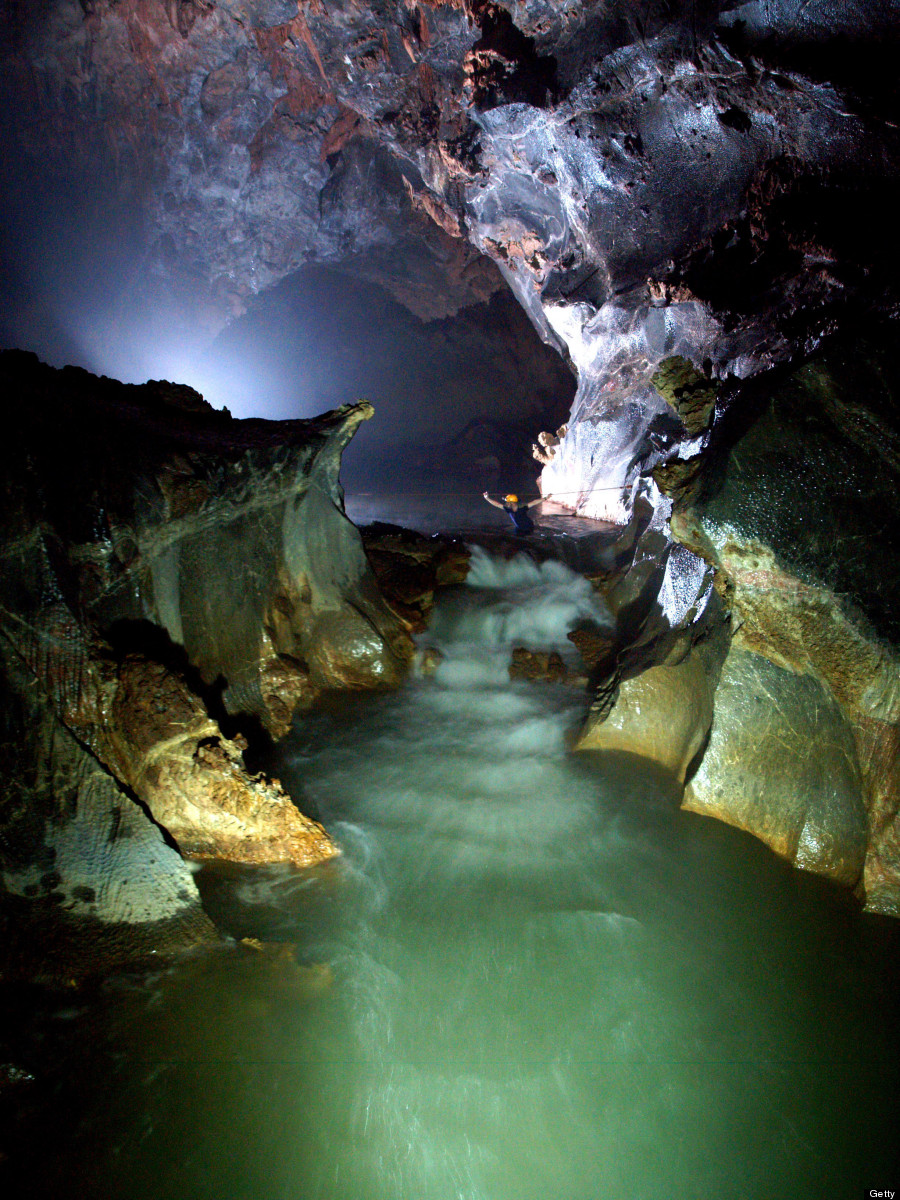 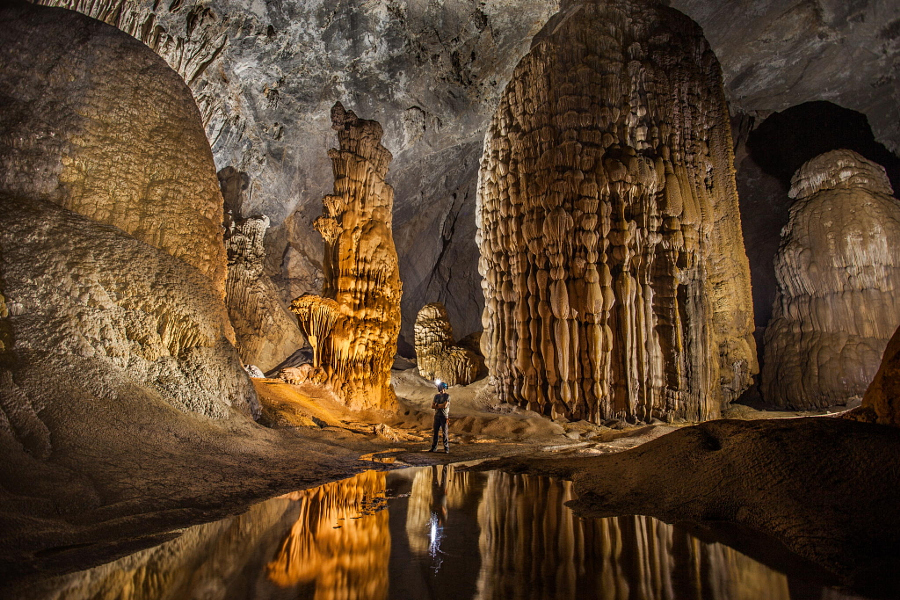 Upon overcoming this first challenge, we felt jubilant because we were the first amateur explorers in Son Doong Cave. The dim and flickering light of headlamps was like fire-flies and was enough for us to be astonished at the magnificent scenery of Son Doong. There were massive stalagmites run along hundred of kilometers from the cliff to the bottom of the cave. The small stalagmites look like high and majestic mountains. While we were enjoying this natural wonder, suddenly some voices cried: “See Doline 1 already”. Doline 1 is the first collapsed ceiling where the light plunges into the cave and also was our first destination on the first day in Son Doong. All people rushed to climb up and saw a blurred flickering spot in the distance. When Doline 1 appeared clearly, we stopped for 10 minutes and from above, happily overlooked a magical stream of light plunging into the dark cave. At the foot of Doline 1 is a bank of smooth sand. Under the illuminate light from the deep pools to the ceiling (dozen of km), the cave bed becomes a vast endless slope with the majestically stone wall. 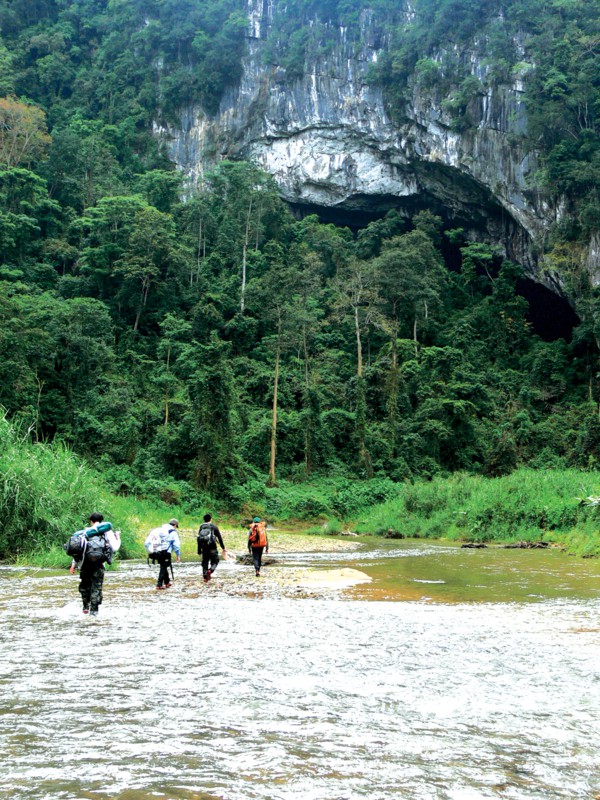 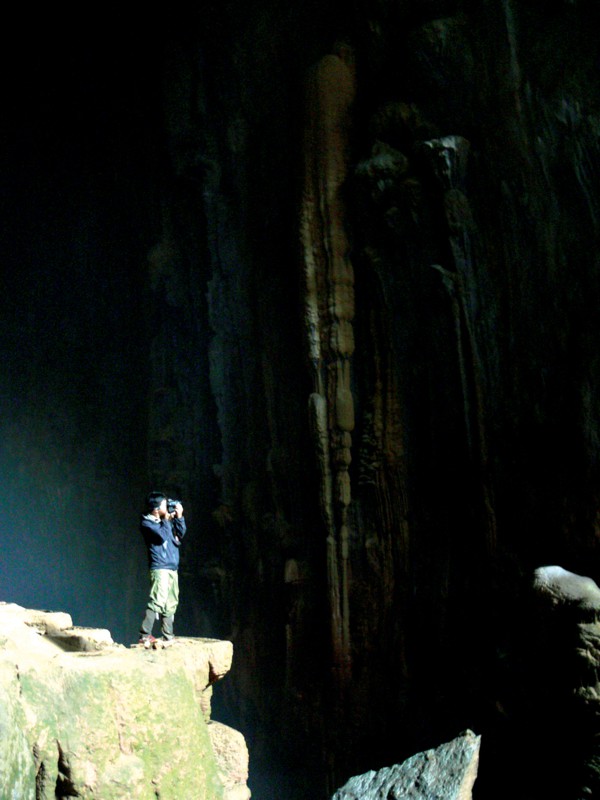 According to National Geographic explorers, a half-mile block of 40-story buildings could fit inside this stretch of Hang Son Dong. We were reluctant to stop here because there was no way to cross this very deep abyss. With a heart full of regrets, we were determined to buy more equipments, devices and train to climb with bolts, so that one day, we could come back Son Doong Cave to discover the rest. 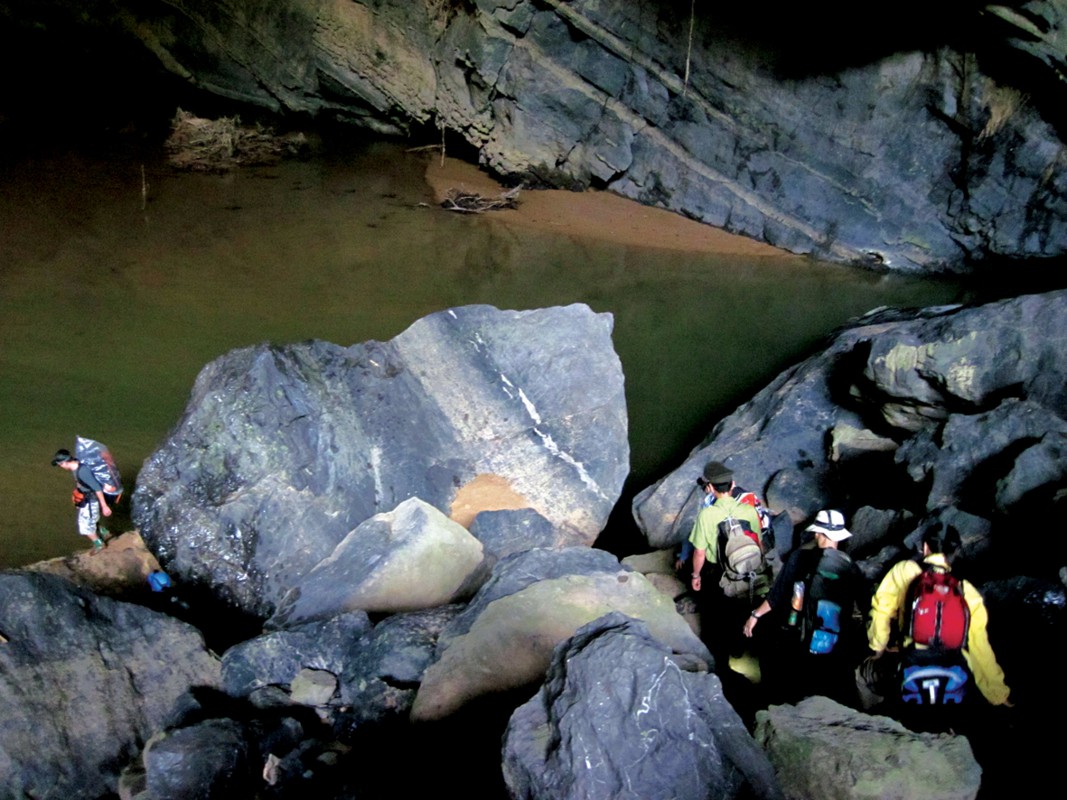 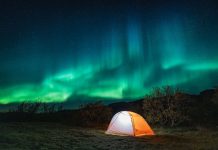 Visit Owakudani Hakone — How to get to Owakudani & what to do in Owakudani Valley, Japan?

Alishan autumn — Where to go & what to do in Alishan, Taiwan in the fall?