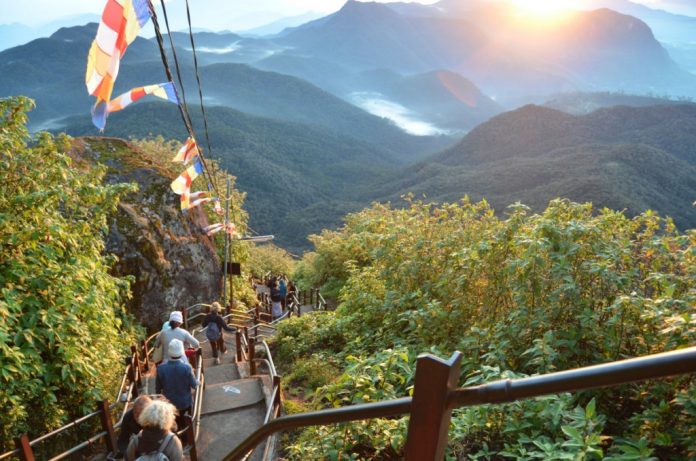 A long line of torches is lightening has lit the long path of 5200 stairs from the mountain foot to its peak. Clear voices of pilgrims in the night frost warms us up. We mix with the line to wait for the first sunlight to Sri Lanka. Let’s discover the relic beauty throug our Adam peak travel blog. 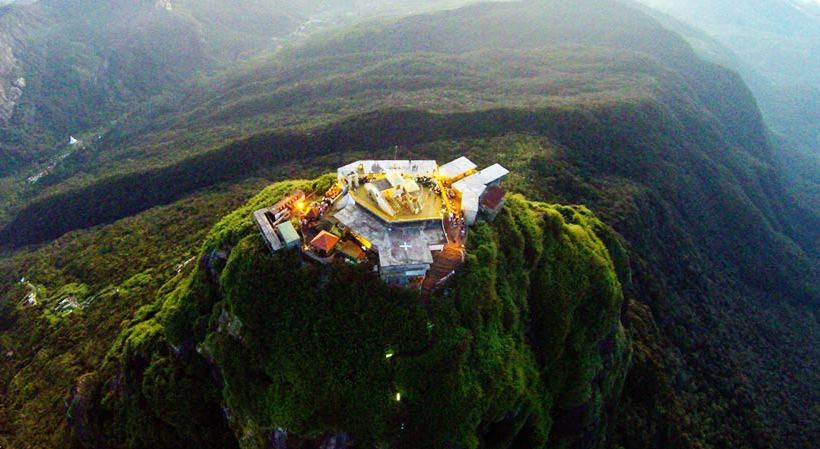 It is 12 o’clock. It’s a dark and cold night after a heavy rain. We pack our things and wear thick coats to travel to Adam’s Peak – the sacred pilgrimage of the local people.

Although the temperature in Sri Lanka in winter is around 20 celsius degree, it seems to be colder today after the rain. In this weather condition, many other pilgrims also prepare for their trip at 2:00 a.m. Some torches are burned; flashlights are turned on and artificial lights on stairs are lit. The village remains quiet. There are now only the drops of rain on thatched roofs, regular steps and the low voices of pilgrims praying. We join the crowd to go up to the mountain peak.

Almost all of pilgrimage starts from Dalhousie, a small village in the North of the mountain. From this village, you climb about 7km, taking about 3-4 hours. After walking through some smooth paths and passing some small pagodas, we stop to rest, drink and eat some snacks before continuing our trip. I feel sweaty and tired but keep my coat on so I don’t get sick by the night frost and cold air. Other groups are also taking a rest. Pilgrims are all ages, from children to the elderly. Their faces are reflected in the unsteady light of flashlights and candles. 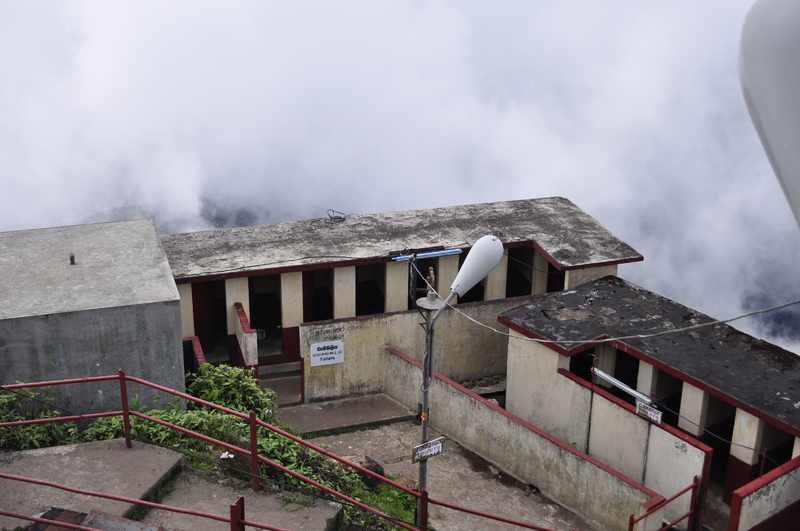 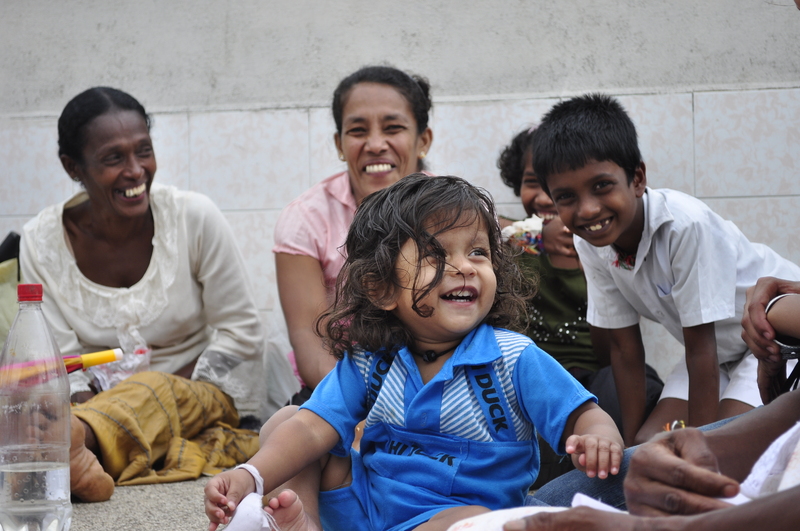 It is believed that the first person to discover the Sacred Footprint was King Valagambahu (104-76 BC) while he was in exile in the mountain wilderness. The owner of this footprint remains unknown. Churches have believed that it is the footprint of their gods. People said that there is also a footprint of the Buddha. When Buddha visited the island of Kelaniya, at the request of King Naga Maniakkika, the Buddha left the trace of his footprint on Sri Pada peak. In his trip, the Buddha also visited other places such as Digavaapi with 500 monks. However, some Christians believe that the footprint on the mountain peak is the first footprint of Adam on earth after he was expelled from Paradise. Stil others thought that it is the footprint of Saint Thomas, who brought Kito to Southern India in the first century A.D while Hindi followers said that it is God Shiva’s – the Destroyer (that’s why the mountain is called Sivan Adipadham or Sivanolipatha Malai) and according to Muslims in Sri Lanka, it is Al-Rohun’s (Soul). Nevertheless, we cannot deny that Adam’s Peak has become a destination of pilgrims to pay homage to their Gods for over 1000 years and attracted a large number of visitors from around the world. Every spring, Buddhist and other religions in long queues and sparkling light climb over 5200 steps to reach the peak before sunrise. The queues with bright torches walk on the tortuous road from the mountain foot to the peak. That bright road has become a symbol of Sri Lanka. Visitors with different religions at Sri Lanka, mixing with pilgrims to climb to the highest peak. No matter what you are Buddhist, Christian, Muslim or Hindi, the pilgrimage will take you to “the light of faith and hope”. 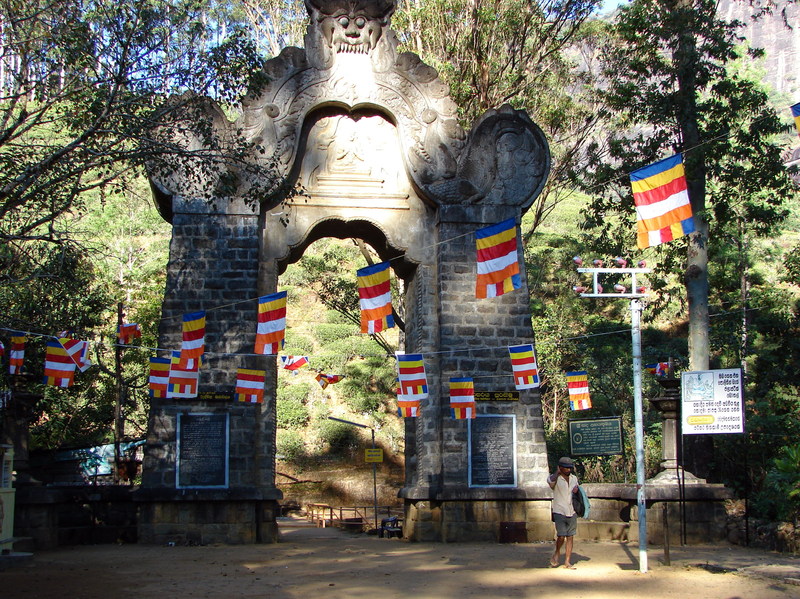 Local people sit on stairs and singing lowly. Although we speak different languages and cannot understand each other, I can also see the faith in their eyes. Some very old women are holding bunches of aromatic jasmine, which will be donated at sacred places on the peak. Although I join in the pilgrimage to witness and discover beautiful sceneries, I am given faith by prays of pilgrims for good luck, good health and happiness.

The higher we climb up, the colder it gets. Strong people go first, the weaker behind without pushing and elbowing others out. There are only queues of pilgrims moving in mysterious light with continuous singings. It is wet and rain is dropping from trees. While we are wearing coats with hats, local people are wearing Hijab (scarf to cover their head of Islams). I am surprised at strings along the road and is explained that they are strings to connect past, present and future of a life.

Only by passing over some stairs, we reach the peak after three hours of climbing. Stairs are separated into two small paths, one for going up and the other for coming down. The sun is rising. At this height, we can view the panorama of the immense forest and roofs of some temples amidst lush forest.

Many Buddhist followers are gathering on the peak. The sun is shining and spread warm sunlight over the mountain. When the first sunlight spread on the peak (about 2243m above the sea level) on nice days, local people in Sri Lanka believes that the God’s footprint will be reflected on the sky. This is an extraordinary optical phenomenon to create a mysterious and sacred beauty for the mountain.

After contemplating the bright sunrise, we follow a group of Buddhists to walk around God’s footprint. An old monk marks the sign of the cross on our forehead and gives us wreaths to bring home. My friend asks for a bell to wish her grandparents well.

We leave the sacred peak when the sun sets. Pilgrims walk downstairs freely. Two dogs run behind us from the peak until the first entrance at the mountain foot. We come down 5200 stairs with faith and hope of a happy life.

BOX: No matter what you are; Buddhist, Christian, Muslim or Hindi, the pilgrimage will take you to “the light of faith and hope”.

Tourism in Sri Lanka is not in a strong position. Services are limited. You can only find hot water and air conditioning at three-star hotels. Those, who like to travel and discover culture, can visit vestiges of ancient cultures. Sri Lanka has an area named “Cultural triangle”, including three ancient cities Polonnaruwa, Anuradhapura and Kandy, in which Polonnaruwa is considered as the centre of “cultural triangle”, 216km from Colombo capital city in the Northwest.

The best time to go on the pilgrimage is spring, from December to April.

We would recommend to rent a car to famous attractions and use a map in order not to get lost.

Daily meals include rice, curry and pittu (fried rice mixed with coconut milk and cooked in bamboo stick). You should bring instant noodles and dried food such as shredded meat, peanuts to serve with rice. Remember to bring a spoon, fork or chopsticks because local people eat by their hands.

Local people in Sri Lanka are so friendly that you can ask the way if you need.

Foreign women should not go out alone, especially, by bus. The air conditioners on buses are adjusted at a very low temperature, so remember to bring thick coats or scarves.

Souvenirs: Do not forget to bring home some boxes of tea because Sri Lanka is one of the biggest tea manufacturers. In addition, colorful masks are indispensable in your bag when traveling to this country.

Accommodation: You can check rates & availability for this hotel on Agoda.com or Booking.com. 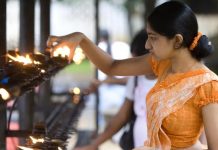