After two days relaxing in Manali, an amazingly beautiful city which is roughly 500 kilometers away from New Dehli, we take our luggage and continue our journey to Ladak — Indian Paradise. Let’s check out our Ladakh trip blog to discover its breathtaking scenery, monasteries, people in the land of high passes.

It seems to us that the way to the Paradise is not much different from the way to… the Hell. Our coach continuously gets across endless and dangerous mountain passes.
Nothing can be seen except for the mountain of rocks and soils when the coach have passed a long distance of 200 kilometers which we can see mountain sides with its scattering trees & plants and several small villages. 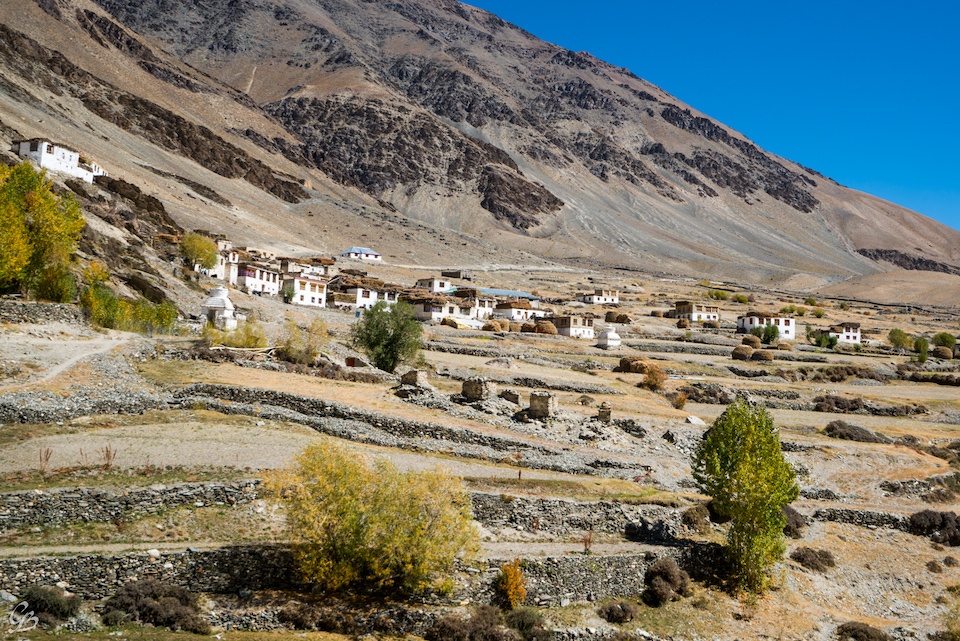 We are experiencing worst and worst roads. Many of us find it heartbreaking when the coach restlessly crosses streams and then slowly runs on a narrow path whose one side is high cliffs and the other side is scary abysses.

Fortunately, we can sometimes find tents selling food and drinks as well as providing resting places for us. That makes us feel safer and cozier in such an immense place with little sign of life as this. It has been written in many English books that Ladakh is the Moonland, perhaps partially because of its the pristine and deserted scenery of rocks and soils. 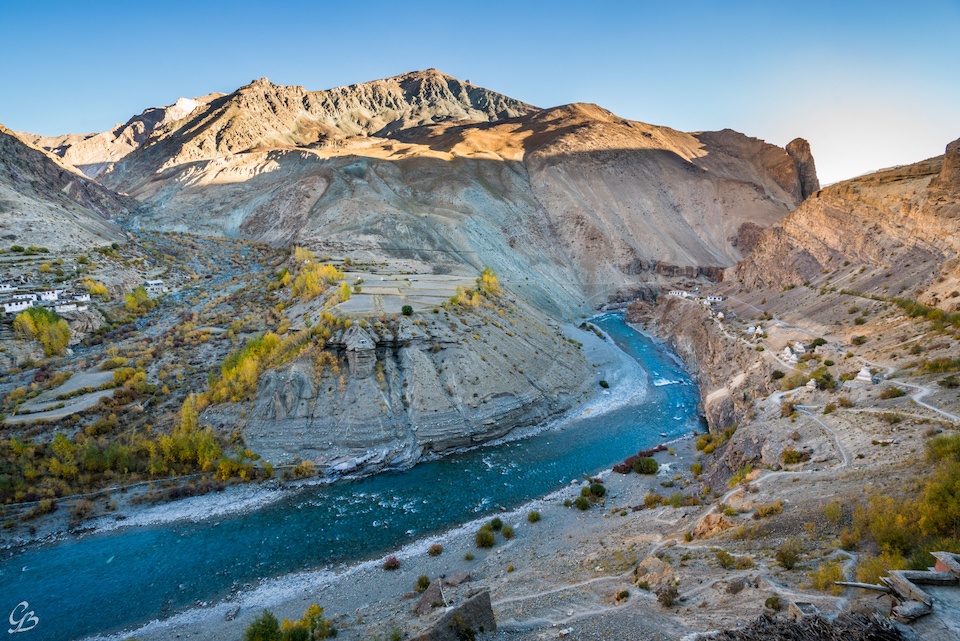 At present, our coach is at the height of nearly 5000 meters in comparison to the sea level. Therefore, some passengers start to complain about their headache and shortness of breath due to thin air. It is getting darker, the full moon rises and brights yellow light to all angles, making stunted and rough mountains under the sun in the afternoon sparkle as if they are silver plated.

And look! How beautiful they are! – The white pieces of mountain rocks look like twinkling gems at night.

This partially gives us the reasons why being located in Kashmir state where fights and conflicts take place constantly, Ladakh is still considered to be a peaceful sanctuary known for its beauty spots and respectable cultural history.

Businessmen were familiar with Ladakh thousands of years ago. The monk Huyen Trang, on his way to seek Buddhist scriptures, used to set his feet on this place. Nowadays, Ladakh is divided into two areas: Kargil and Leh. At Leh, a large number of Buddhists have turned this place into a Buddhist kingdom with a special cultural background.

The belief here is a harmonious combination of Kashmir Buddhism, ancient belief Bon and Tibetan Buddhism. Therefore, many people imagine being in Lhasa, Tibet when entering Leh.

The city of Leh is so small that visitors can walk around and discover it in only one hour. The architecture of houses in such a mountainous town is quite homogeneous with the highest building of 2 floors.

The most poetic thing is winding lanes leading to houses whose surrounding walls are short and decorated with pure white peach blossom. The majority of city houses here have small front gardens for its owners to plant potatoes, corns and so forth.From every angle in Leh, visitors are able to see ancient Leh Palace being halfway on the hill near the center of this city.

This ancient and giant Palace was built in the 16th century. People may think that the way there is short but in fact, it would take a long time to reach there due to bad and zigzag paths. The inside of it is ruined because of being abandoned for hundreds of years.

Leaving the Palace, we trace rocky slopes to visit an ancient pagoda at the peak of this hill. The pagoda was erected about 600 years ago. As a result, all the furniture inside has been greatly damaged except for the only 4.5-meter high Maitreya Buddha standing majestically.

Looking the entire Leh city from the hill, visitors have chances to enjoy the feeling of peacefulness. The city here remains the natural rustic beauty as it was in the past. People living in Leh city go to bed relatively early. Shops and stores have been closed quietly in harmony with the flickering street lights. The only noisy and busy area is food and drinks area.

Leh food is popular in Chinese restaurants, Indian ones as well as European ones where delicious dishes with its exquisite tastes are served. With merely more than 100 thousand VND, visitors can fill their stomachs with tasty dishes.

Ladakh trip blog: Treasures of the past

We spend our second day in Leh on visiting well-known monasteries in the city. The coach runs under the picturesque blue sky, passing spectacular highlands. Green meadows proudly out stand in the pure white of snowy mountains. Passengers on the coach with a little intention paying to the outside can notice remote villages located at the foot of mountains appearing and disappearing quickly.

Passing through a distance of 50 kilometers, we reach Hemis monastery built in the 1630s. This is the biggest monastery in Ladakh with approximately 400 followers. After buying entrance tickets which totally cost us 50 thousand VND, we are allowed to visit the monastery and its underground museum.

When people enter the large yard, what strikes their eyes is Hemis colorful main hall inside which wonderful ancient thanka paintings are hung on the walls. We go upstair to the second floor where the great master Padmasambhava’s altar is put. He has been considered the founder of Tibetan Tantric Buddhism.

In the back of this altar, there is a way to the monastery’s roof where we can enjoy the fantastic beauty of the sight. Small villages are what near the Monastery most. About tens of houses made of rocks and mud have been established, which makes a strong impression in the high and mountainous area on visitors.

Hemis is not only famous for its ancient architecture and precious paintings but it also attracts people with its underground museum. The collection of Buddhism historical references, sacred offerings, costumes, weapons and so forth are exhibited there. All the objects on display imply the existence of Buddhism in Himalayan region and in Ladakh over a period of more than a thousand years. There are so many valuable objects that we have to memorize as we are not allowed to take photos of them.

The second famous place, after Hemis Monastery, is Thiksey Monastery. To reach there, visitors must cross green-poplar-lined roads. In spite of being not as prosperous as Hemis, Thiksey strikes visitors with its wideness.

All buildings of the monastery completely cover a hill of deserts and vast strips of sand. Looking at it from far away, Thiksey looks like a religious construction complex where pagodas interweave each other.

This monastery is even bigger than King’s Palace and there are a lot of ways leading to the peak of the hill. We trace the trail winding around bright-painted houses to visit Thiksey’s superb main hall.

The attractiveness of Thiksey is not only the surrounding scenes but also the inside appearance of each hall. Thiksey was built in the 15th century. Beside the old hall, new halls were built in 1980.

Fifteen-meter high Buddha Maitreya with its lively dhammacakka. It took artists as much time as 4 years to finish subtle textures, combine different colors but brings gentle purity for it. The architecture of Thiksey and some monasteries in Ladakh do not simply serve religious purposes but it also has protectiveness. 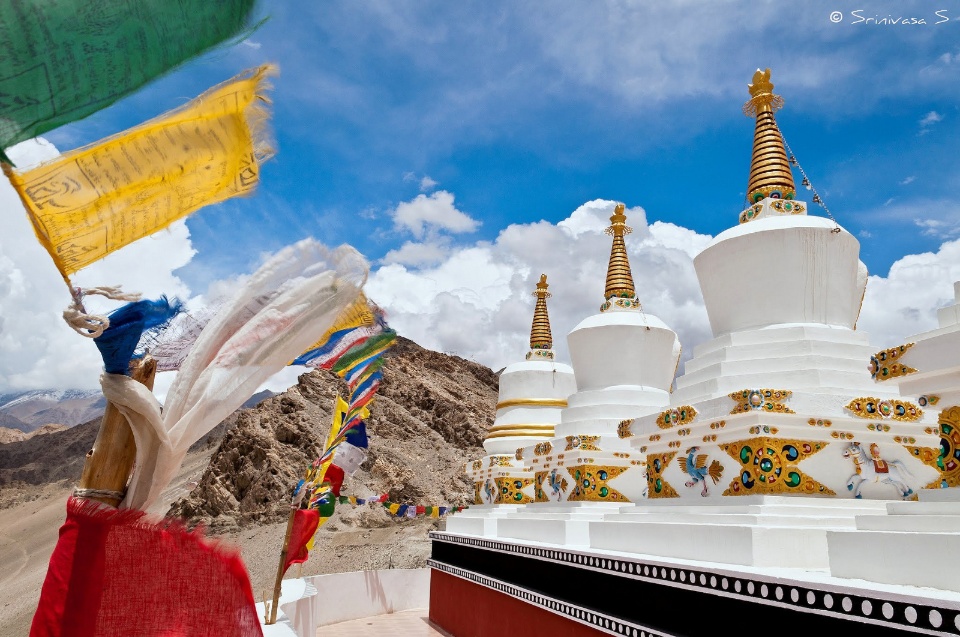 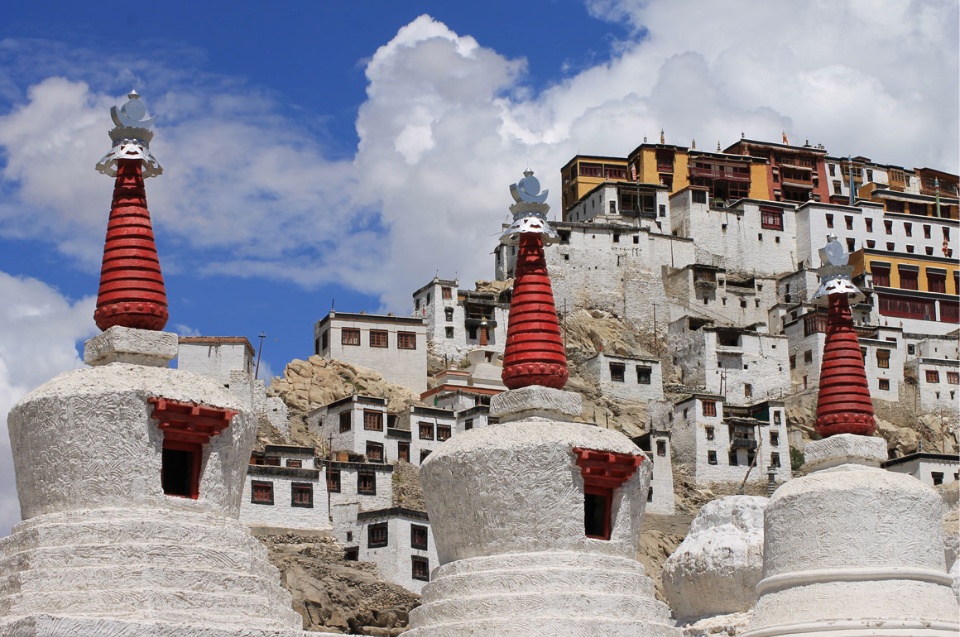 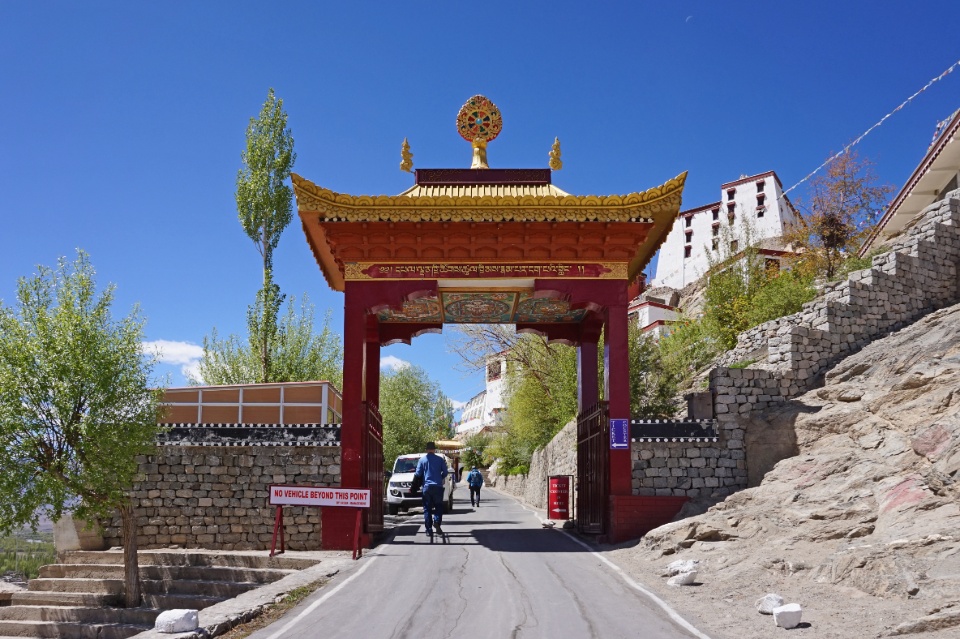 This partially explains the reasons why the monasteries are often established in dangerous and rugged places such as large riverside. Therefore, besides the spiritual quietness, the monasteries are places where visitors can enjoy the marvelous sights of mountains in Kashmir.

Some photos of Ladakh on our journey: 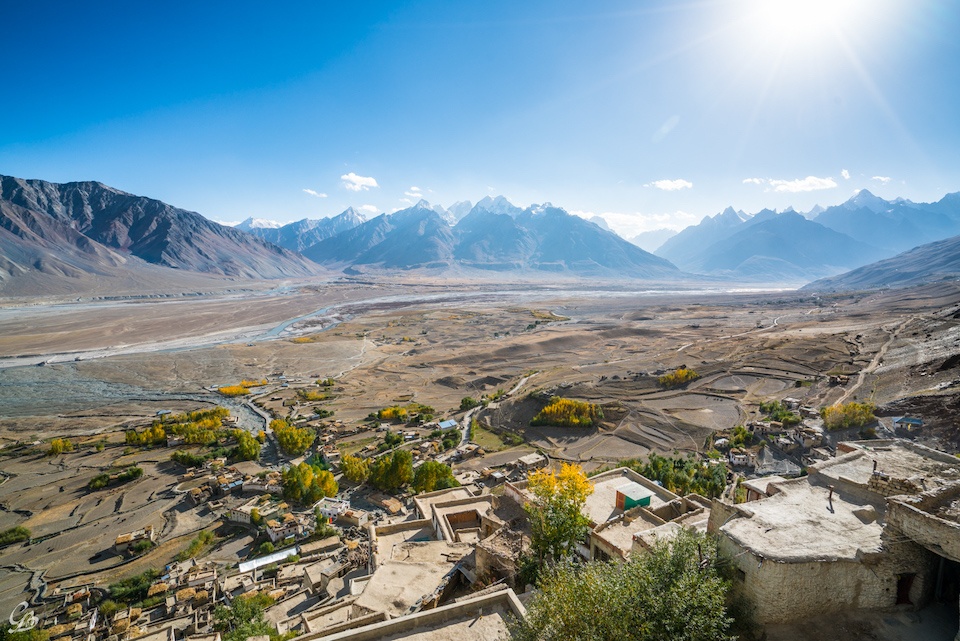 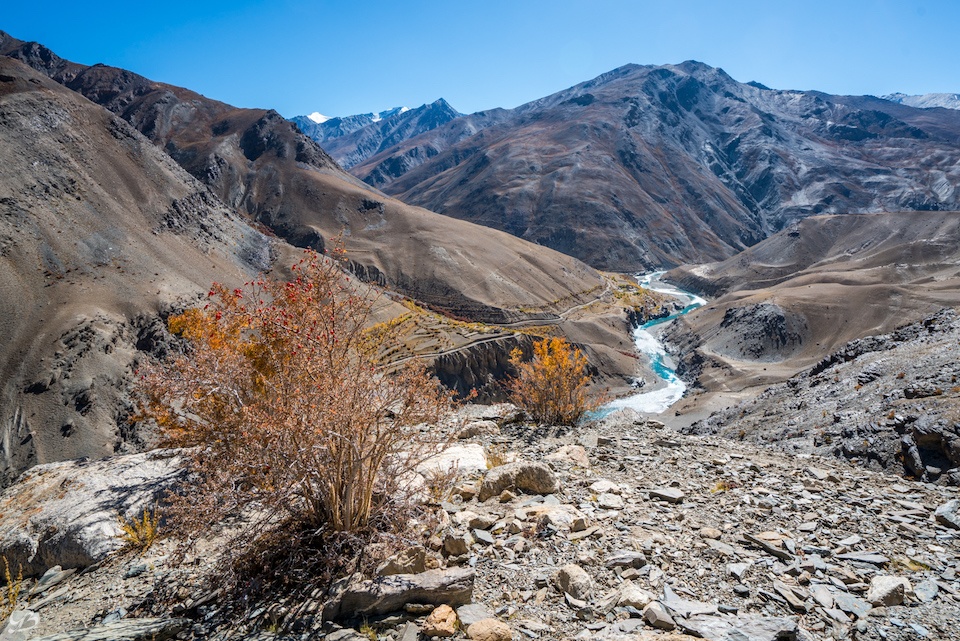 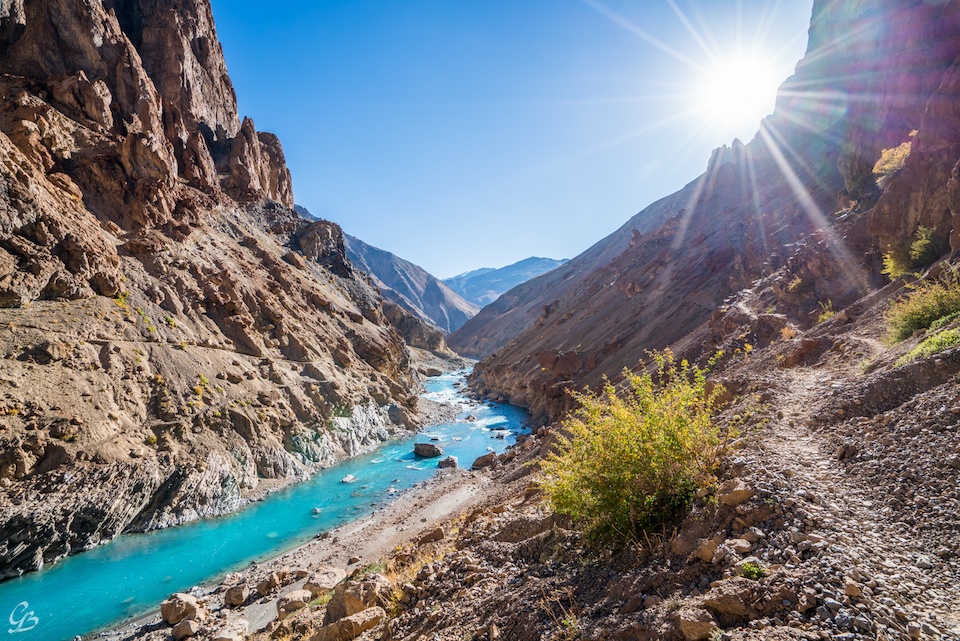 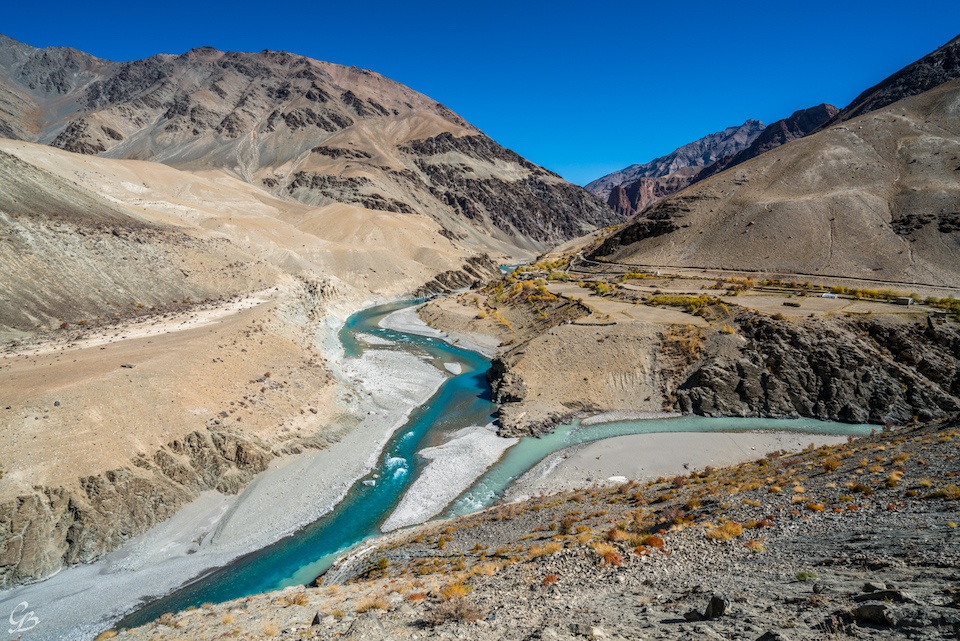