The Merlion statue having water spraying from the mouth is made of cement fondue, the skin from porcelain plates and eyes from small red teacups.

Travelling to Singapore without visiting the Merlion statue, you have not yet considered “check-in” Singapore. The sea lion statue is named Merlion – an imaginary creature which is actually a traditional creature in western heraldry that depicts a creature with a lion’s head and a body of a fish. Merlion has become a national personification of Singapore.

The original sea lion statue which is 8.6 meter tall and 70 ton weight was placed in the 2,500 square metre Merlion Park, right in Marina Bay. The lion head symbolizes the animal that Prince Sang Nila Utama saw when he discovered the Singapura land in the 11th century BC that was recorded in the “Malay Annals“. The fish tail represents the ancient city of Temasek (means “sea town” in Javanese). Singapore is the new name after changed from “Singapura” which means “lion city” in Sanskrit. The Merlion Statue is the symbol of Singapore’s origin as a fishing village. Merlion Park nowadays is a public venue and it is open for free.

The Merlion statue having water spraying from the mouth is made of cement fondue, the skin from porcelain plates and eyes from small red teacups.

Mr. Lee Kuan Yew – the Prime Minister of Singapore at the time officiated the installation ceremony of the Merlion statue on 1972. A bronze plaque was erected to commemorate this auspicious event with the inscription as follow: The statue of Merlion was installed here as a symbol to welcome all visitors to Singapore.

Apart from the biggest statue, there are other 4 sea lion statues in Singapore including:

– The 2 meter tall, 3 ton weight Merlion cub is located about 28 meters behind the original statue, fell deep into the city, and also placed in the Merlion Park

– The 37-metre-tall gigantic replica on Sentosa Island which is also a tourist attraction and tourists can climb up to the top. 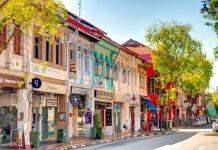 Orchard Bars Singapore — 9 best bars in Orchard you should visit 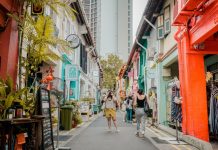 Singapore travel tips blog — 15+ dos and don’ts, things & what to know before traveling to Singapore 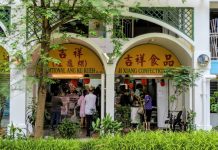 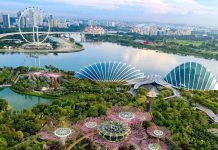 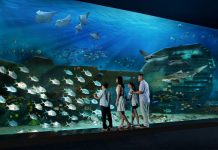 Orchard Bars Singapore — 9 best bars in Orchard you should...