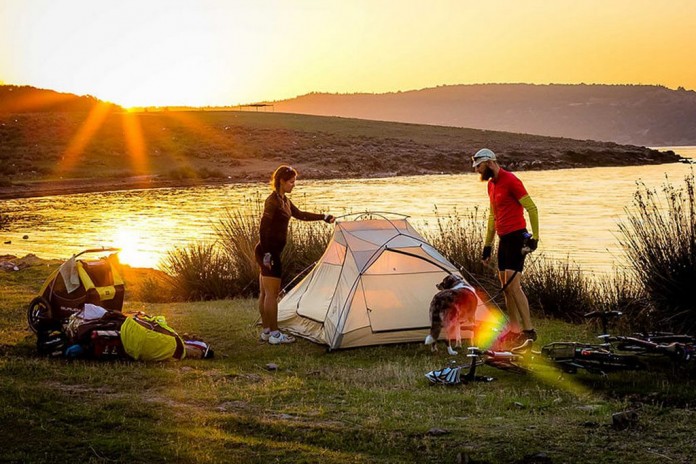 Jen and Dave: The animal lovers

When I started writing this Couple Series, I never thought I’d write one day about a trio… A few weeks ago, I received an email from Jen, inviting me to check-out her blog. I had a look and immediately decided that I would write about them in my next feature. I admire their « nothing is impossible » state of mind: the fact that they didn’t think having a dog and traveling was incompatible, or that they decided to complete this journey on their bicycles.

The first thing I asked Jen is how it all started: “Dave and I met as graduate students earning our MBAs in sustainable systems from Pinchot University just outside of Seattle”, she answered. “Travel has always been an important theme within our relationship. It took a while for our lives to sync in a way that allowed us to want to travel full time as we do now, and before that, we’d make sure to travel internationally at least once per year, and regularly within the West Coast and Vancouver, as it was not too far from Portland, the city where we had settled in.”

When Dave and Jen made the big decision to travel full time, they had to select their first destination. For them, it was a no-brainer: Europe would be the continent where they would start their adventure. “We choose to begin in Europe for two main reasons: the cycling infrastructure and the overall attitude towards dogs. Europe reigns king in terms of cycle paths, accommodations for cyclists, accessibility for bikes, etc. Portland is known to be one of the great cycling cities in the US and we wanted to see how it compares to cities like Oslo, Copenhagen, and Gothenburg. We wanted to bring ideas back home to bring our city to a higher level. Since traveling with a dog is a rather large commitment, we also wanted to begin in a place where she would be accepted and where it would be easy to bring her along. As we made our way through the Balkans and Turkey, it became a bit more difficult, as the attitude towards dogs changes significantly. We had never gone on a cycle tour of this scale before and we wanted to ease in to make sure we enjoyed ourselves.”

“How did you decide to travel by bike and why?” was my next question. « Dave was growing sicker of his corporate job and looking for an exit strategy. In early 2014, he worked on a start-up that would create a shared services model and co-working space for Portland’s bike businesses. After several months, it ended up not working out as planned and he found himself stuck in the same place he had been for the past several years. He felt purposeless and like there was no way out. So he proposed the idea of cycling around the world with Sora.”

Jen adds: “At first, I wasn’t so keen on the idea, I had just landed what I thought was my dream job – working in tourism for a destination marketing organization in Oregon. I had worked hard to get it and didn’t want to give it up so quickly. However, as I looked more deeply into it, I realized all the things I had to give up – long morning runs, my sleep, Sundays were dedicated to meal planning, cooking during the week, errands I needed to run, and more. This was not my dream. My dream was not to have my time dictated by someone else in exchange for a paycheck. So, I agreed to go on the trip. We chose to travel by bike because we loved the idea of slow travel. We wanted a way to bring Sora with us and to fly as little as possible. Traveling by bike allows us to see so much more than we would if we chose to go by car, train, bus, or air. Plus, we stay in great shape and can eat what we want!”

I then ask Dave and Jen about the biggest advantages and disadvantages of this traveling lifestyle…. “When you travel by bike, particularly with a dog, you attract a lot of attention from the locals. The want to talk to you and take your photo, and often invite you to their homes or give you tips on where to go or stay. We engage much more with the people than we would if we were traveling in a different manner”, they tell me. “We also see the interiors of a country. Rather than hopping from city to city, we visit the places that you miss when you fly by on a faster mode of transportation. This allows us to not only experience countries off the tourist trail, but also allows us to support the small, local economies that need it most.”

However, Dave and Jen agree that traveling by bike with a dog is not always easy: “We are at the mercy of the weather and we have to press on whether it’s raining, windy, 100 degrees, or freezing. Cycle touring can certainly be miserable when the weather is not agreeable. In Patagonia, we’ve been battling winds averaging 30 mph. They’re constantly blowing and it’s demoralizing. It’s tough to get up every day knowing what we have to face… Another disadvantage is that you travel with a ton of bags – we each have four panniers, a handlebar bag, trunk bags, plus Sora’s gear…”

Dave and Jen recognize that taking their dog on this journey clearly complicated things a bit. But they both agree on the fact that Sora joining them was non-negotiable and they never regretted it. “Sora is like our kid. We take her everywhere we go at home and we were determined to figure out a way to take her abroad. She makes our journey infinitely better with her morning snuggles, evening “zoomies,” and constant love. We attract attention everywhere we go because of her and people are always surprised when the baby they think is inside our trailer is actually a dog. It’s certainly more difficult, expensive, and time-consuming to bring her along. We have to constantly visit vets when we travel in between certain countries, we pay more when we want to stay in a hotel, and it can take a lot of effort to find dog-friendly accommodations in some places. We sometimes eat outside in the cold because we can’t take her inside a restaurant with us, we take turns going in and out of stores, and we carry far more weight on our bikes, but to us it’s worth it. She’s family and if we go, she goes.”

After their journey in Europe, Jen, Dave and Sora headed to South America. They decided to travel home from there, starting in Patagonia. “As our European adventure began to wind down, we realized that we had spent far less than we had estimated and didn’t want to stop traveling. We thought about traveling across Europe to Asia, but obtaining visas in some countries is notoriously difficult, plus it meant traveling through some stricter Muslim countries where dogs are not really welcome. We decided to head towards South America instead.” Dave explains: “Jen has lived in Chile so she speaks Spanish and I wanted to learn the language. Patagonia to Portland seemed like as good a route as any and if we want to keep going when we reach the US, we can travel our own country and/or Canada.”

I am amazed by the distance traveled by the couple and their dog, and also by their constant motivation. I then ask them if there has been any difficult moment or time they wanted to give up… “The most difficult part of our journey by far has been seeing all the abandoned street dogs and cats in places like the Balkans, Turkey, and Latin America. It breaks our hearts to see them sick, injured, or with mange. We’ve rescued a puppy stuck in a stream and another dog stuck in a trough. The most difficult rescue was three newborn kittens from a dumpster in Macedonia. Someone had just thrown them away like trash. We spent hours looking for a vet to take them and agree to help them…”

However, their trip has also been full of good surprises and unexpected encounters. “The Turkish people and their hospitality is unparalleled. We were constantly invited to tea, into homes; they accommodated Sora despite cultural believes around dogs inside the home. They brought us food and one woman rubbed arnica on my back when I strained it helping Dave carry the trailer down some stairs. The Turkish were some of the kindest, most wonderful people we met anywhere on our journey,” explains Jen.

“A lot of our worst days actually end up being our greatest memories,” adds Dave. “We spent one day in Bulgaria following the “cycle path,” which really meant pushing our bike up a rocky goat path for four hours. We totaled four kilometers for the entire day. I wanted to throw my bike into the ravine below. At the end of the four kilometers, we happened upon a mountain hut where we found a cheap accommodation, a super comfortable bed, and a host that would cook for us.”

I love Jen and Dave’s positive look on things and before leaving them, I ask them what their plans are for the near future… ”Cycling back to Portland is a pretty big project! Other than that, Jen is looking into writing for publications and blogs. We want to grow our blog presence and create some work that helps others plan for a long bicycle tour either with or without their pet. We have a lot of information on our blog about traveling with a dog. Jen also produces vegan camp recipes for our blog and wants to ramp up the volume more there. She has aspirations to create a vegan camp cook book during a break in cycle touring. We are also putting ourselves out there in terms of work projects. Ideally, we want to find contract jobs that fall within our ideals of sustainable, local economies, slow travel, animals, and veganism.”

If you want to know more about Jen and Dave’s exciting projects, you can follow their adventures on various social networks such as Facebook and Instagram or on their blog, Long Haul Trekkers.