From the ancient medina in the imperial city of Fes to dreamy spice-filled souks and traversing the towering sand dunes of the Sahara – Morocco is a land of fantasy and adventure. Add these experiences to your travel hit-list.

Get Lost in Fes

Fes was Morocco’s capital for more than 400 years and is still considered to be the cultural and religious hub of the country. The local handicrafts here are not to be missed. Think intricate brass lanterns and brightly coloured textiles to ceramic bowls and tagines. And bargaining for is essential. 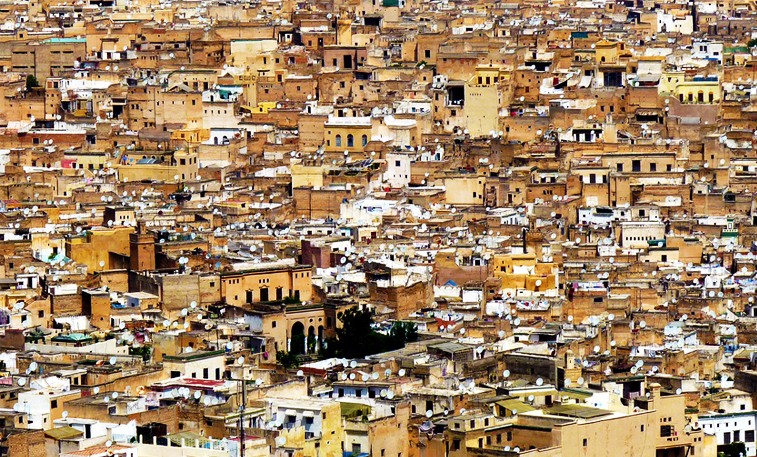 If you’re not in it for the shopping, then the medina is fantastic for people watching. Make time to visit the stunning Palais Amani Hotel, undoubtedly one of the best in the city. This private mansion turned boutique hotel is all Moroccan opulence and offers a welcome break from the mania of the medina outside. Even if you don’t stay here, make time for dinner in its beautiful candlelit courtyard.

A slice of coastal Spain in Morocco, the whitewashed resort town of Asilah looks like it has been transported direct from the Costa del Sol, so it comes as no surprise that the town was part of Spanish territory for a long time.

Every August the sleepy seaside town becomes a magnet for the international arts community thanks to the International Cultural Moussem of Asilah. During this time concerts, lectures, poetry readings and mass graffiti murals attract a crowd of more than 100,000 from all over the world. 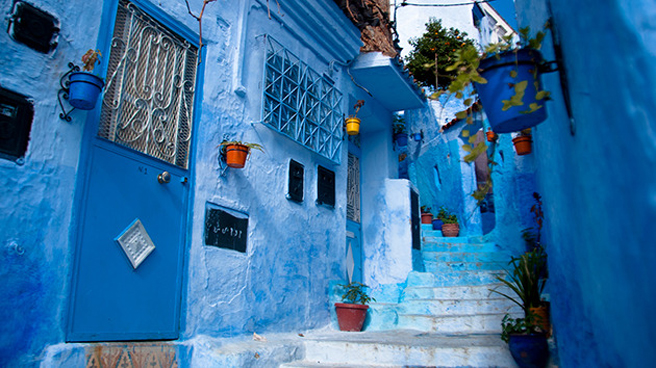 Nestled in Morocco’s Rif Mountains, the picture-perfect blue washed mountain city of Chefchaouen has to be one one of the most beautiful in the world. Popular with independent travellers, there’s activities for both outdoor lovers and culture vultures alike. Embark on hillside hikes, bathe in mountain streams or embrace the local culinary scene and unique shopping. Traditional crafts made by Berber tribes in the surrounding mountains make the best buys – look for cactus silk hand embroidered rugs, and the local custom-made ‘babouche’ leather slippers. 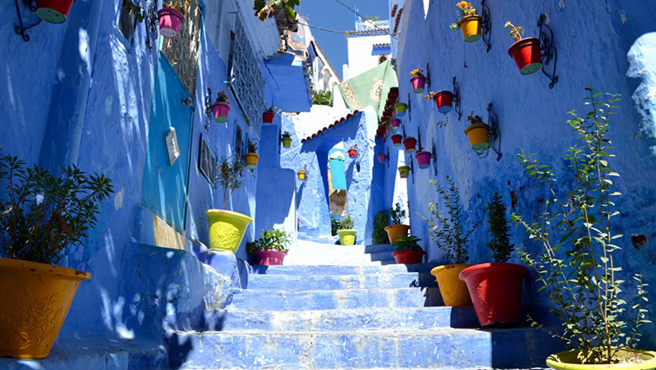 Pull up to a cafe in the bustling main square and drink mint tea (the best in the country) and snack on local fare such as ‘pastilla’, a delectable flaky pastry stuffed with lamb or chicken and topped with toasted almonds. Nearby there are also several public hammams (bath house). For the tiny sum of 25 dirhams, you can experience the Moroccan institution and scrub yourselves clean as countless others have done over the centuries.

The Dandes Valley – or ‘The Valley of One Thousand Kasbahs’ as it’s also known – showcases some of the country’s most stunning mountain scenery.

Lined on either side by red hued cliffs, the serpentine road takes drivers past multitudes of impressive kasbahs and small, Berber villages. Break up the car journey with a spot of hiking to appreciate the uniqueness of this area. 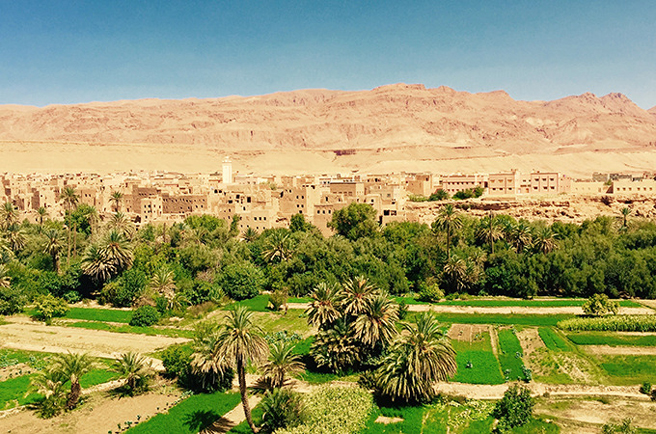 While most have never heard of the high-desert city of Ouarzazate, chances are you’ll have already seen it. Located in the southern-central Morocco, this town has been the go-to location for A-list movie directors ever since Lawrence of Arabia was partly shot here in the 60s. Now home to the Atlas Film Studios, created to cater to the demand from Hollywood, the city’s ancient fortress of Ait Benhaddou and its lush green palm oases have featured in an array of movies, including Gladiator, Kingdom of Heaven, Alexander and Prince of Persia. Most recently, the world heritage listed site has been used for several scenes in Game of Thrones. Extend your experience to where you stay, thanks to the Oscar Hotel (located within the walls of the Atlas Film Studios) which offers 58 film-themed rooms.

Camp in the Desert 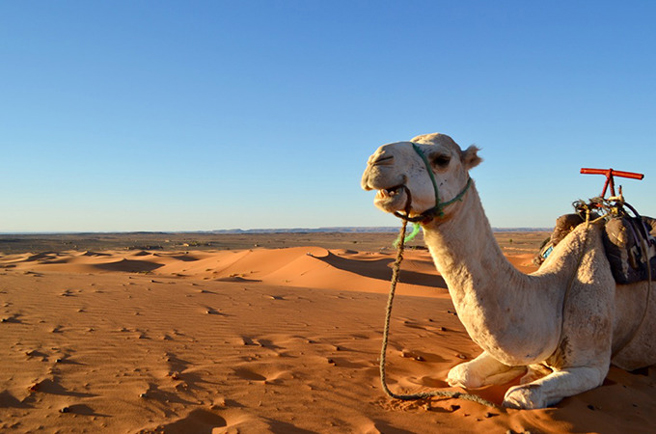 No visit to Morocco is complete without spending one night camping under the stars in the magnificent Sahara desert. The town of Merzouga (located about 450 miles south east from Marrakech, close to the Algerian border) is the gateway to the famous Erg Chebbi sand dunes – the largest in the country. Traversing these mesmerising apricot-coloured giants is an other-wordly experience that’s well worth the journey.

Countless desert tours are available, most of which encompass camel riding and a few nights spent in Berber tents, some will even arrange a stay with a nomadic tribe for a truly authentic experience.

Stretching over 2,400 kilometres from the west to Tunisia, the High Atlas in Morocco is home to North Africa’s highest peak, Jebel Toubkal. At 4,167metres it’s a challenge to reach the summit, but worth it for the spectacular views. Treks generally depart from Imlil (an hour’s drive from Marrakech) and it’s recommended you allow three-days to complete it leisurely.

If you’re stuck for time, head to Ourika Valley. An easy day trip from Marrakech the route follows the gentle slopes of the valley, taking in views of picturesque Berber villages and ends in Setti Fatma, home of the seven waterfalls.

The focal point of Marrakech, Djemaa el Fna is the real heart of the city. It may be chaotic, loud and congested, yet no trip is complete without a visit. Here snake charmers, fortune tellers, monkeys, musicians and even plier-wielding tooth-pullers, jostle for space, transforming the square into a circus.

While there’s activity 24/7, it’s in the late afternoon that the square really fills to become an intoxicating carnival of local life. Take a break from the bustle the square’s rooftop cafes, from which you can observe the spectacle from afar but remember, sensory-overload is all part of the experience.

Volubilis (also referred to as ‘Walili’) is a third-century archeological site with the best preserved Roman ruins in Northern Africa. The former town was the administrative centre of the African province during Roman times, so its historical importance is significant.

Located around 58 kilometers outside of Fes, the ruins are spread across several acres and comprise massive columns, the basilica and a triumphal arch, in addition to colourful mosaics – that are extremely well-preserved – depicting classical Roman mythology. Flanked by spectacular countryside, the location is worth a visit alone.

Essaouira is a great place to escape the noise of neighbouring Marrakech. Located only a few hours drive from the “red city”, the town is a regular getaway for locals and a favourite with hippy travellers – Jimi Hendrix and Bob Marley frequented the town back in its swinging 60s heyday. Nowadays the sleepy coastal town caters to cashed-up urbanites looking to chill out. There’s a distinct Mediterranean vibe and it’s beautiful narrow red and blue painted streets are a mishmash of cosmopolitan cafes, white table clothed eateries, stylish bars and pretty shops.

You can explore the whole town in a morning or afternoon, but long lazy days are the entire point of this beachside retreat. Here, the most taxing activity involves hitting the (very) windy beach for a wind or kite surfing session. 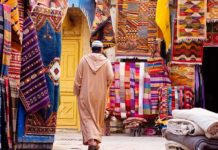 15 things to know before traveling to Morocco 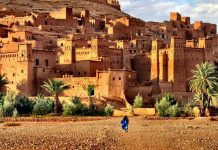 Visiting Ait Benhaddou — One of the most famous village in Morocco 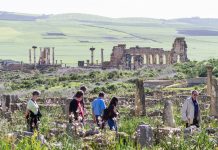 A journey to the ancient sites: Volubilis & Moulay Idriss Zerhoun of Morocco 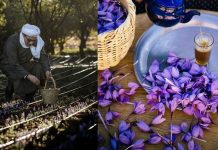 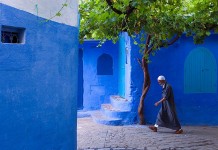