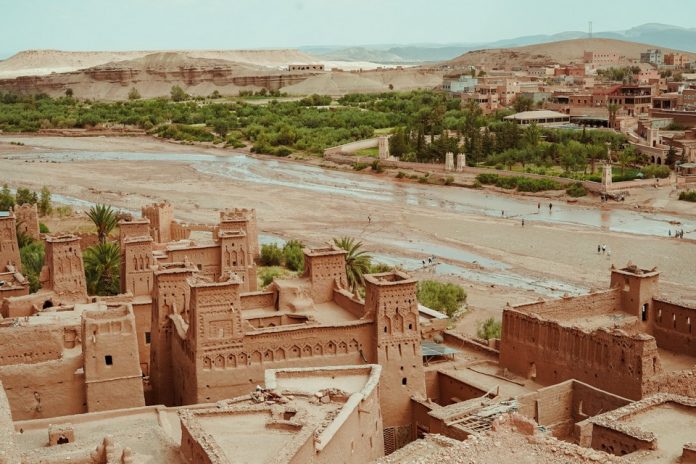 Morocco caught me off guard with the elegant harbor city of Tangier, the renowned poetic Casablanca, Fez deep inside the continent, and vast Marrakesh with its strong vitality. However, Ait Benhaddou impressed me the most in its own way. Let’s discover the hidden village through my Ait Benhaddou travel blog. 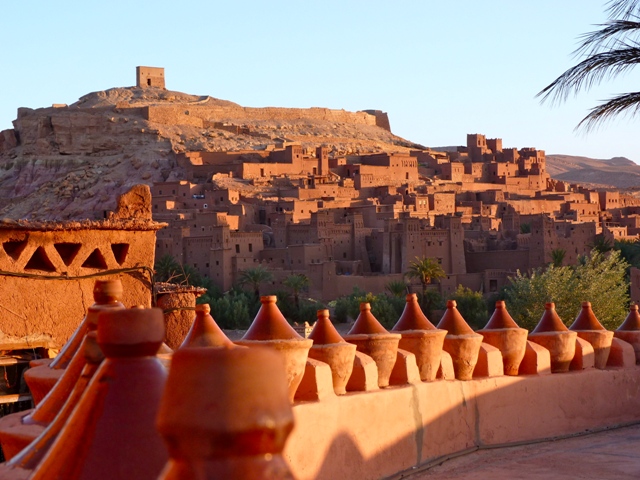 Ait Benhaddou, located in the Southeastern Morocco, has been recognized by UNESCO as a world heritage site since 1987, the same year when The Living Daylights was filmed there. The village has also been the setting of famous films such as Lawrence of Arabia, Star Wars, and Gladiator.

About 30km from Ouarzazate, Ait Benhaddou, nestled in the foot mountains of the High Atlas, is one of the most attractive places in Morocco. The village enchants international visitors with buildings following a special style called Ksar. Ksar refers to a group of houses made by soil and surrounded by high walls, which is considered the traditional living space of locals in the Sahara desert. There are also houses consisting of 3 to 4 floors made from soil. Inside high mud walls are 6 ksars, each including 8 families living together. 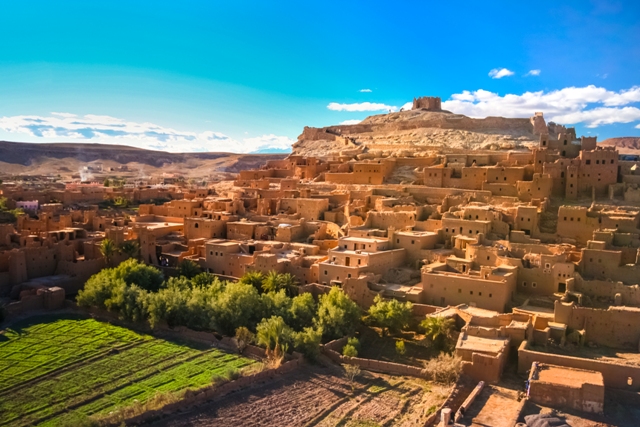 The houses are not terribly sophisticated, but the upper floors are adorned with ornate patterns. Moreover, a tower is built in each corner of the wall by brick and mud in a traditional way. The more sophisticated the towers are, the richer their owner is. Many towers are even so ornate they look like crowns. However, as all of them were made from soil, after years they get old and fall apart due to the weather. 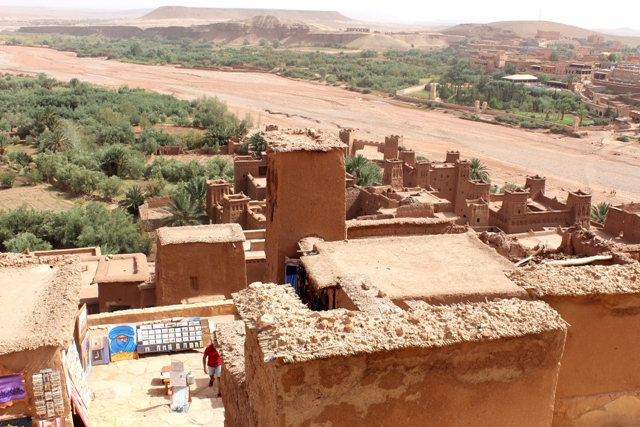 Reach higher ground and you will have a chance to take in the beauty of the village. From above, the Ksars are more stunning under vivid desert sunshine. For many visitors, the best time to visit Ait Bebhaddou is late afternoon and during sunset. If you can do only one thing on your visit here, then make it standing on the peak of Ait Ben Haddou and overlook the area in the amazing moment of sunset. 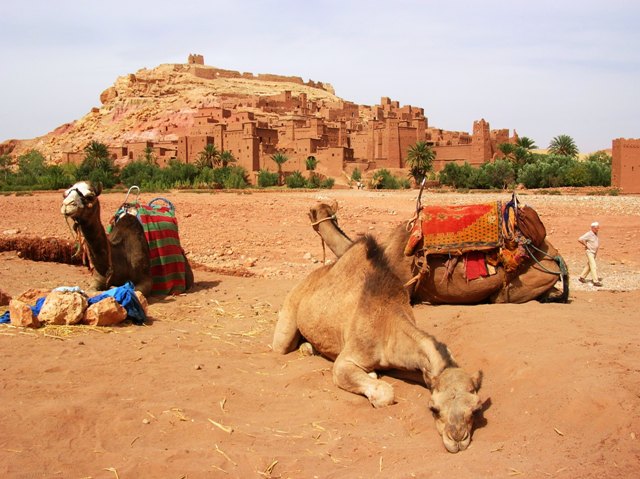 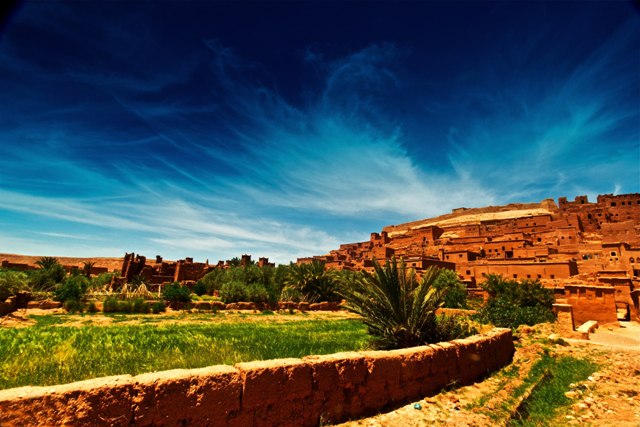 Mr. Mohamed is a fire painter and has lived there for 30 years. With simple tools, and skillful hands, he paints gorgeous pictures of Morocco’s culture and landscape as well. The most difficult thing is creating the “soul” for the painting, he shared. This requires the patience, skills, and the passion of a true artist. With only two main colors – the white of paper and the yellow brown of burned ink, Mohamed creates contrasting lines, making the picture deep and impressive. 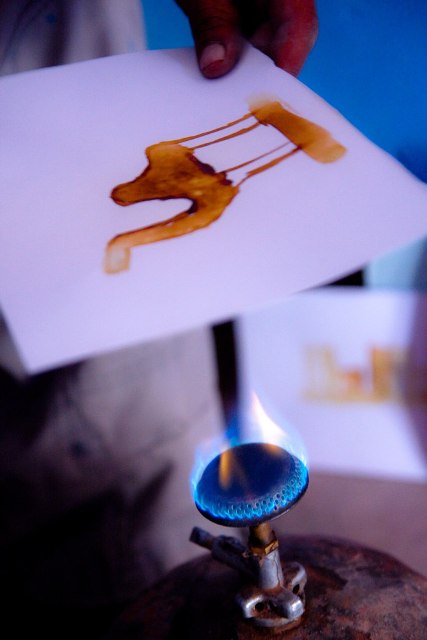 The simplicity of fire painting seems most suitable to represent the old yet poetic scenes, allowing visitors to experience and learn more about the famous destinations in old Morocco. Mohamed also shared that we must draw very carefully because an ill-placed line cannot be erased. Therefore, an artist must have sincere passion for fire painting first, then practice hard for a long time indeed. 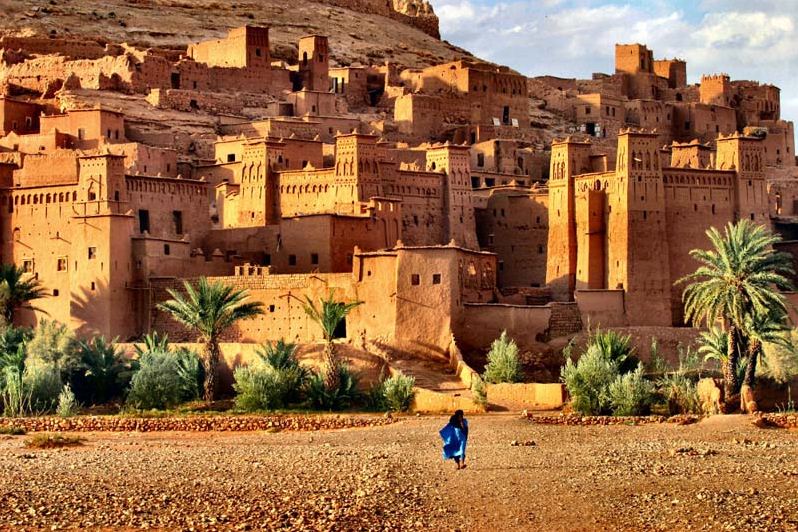 I completed my journey to Ait Benhaddou by enjoying hot tea in a silver cup at a local tea house. Morrocans usually treat their guests by three types of tea, each featuring its own flavor and meaning. The sunset seemed to want me stay Longer. Tea and Ksars can be found anywhere in Morocco, but Ait BenHaddou makes every visitors want to return thanks to its unparalleled antique beauty. 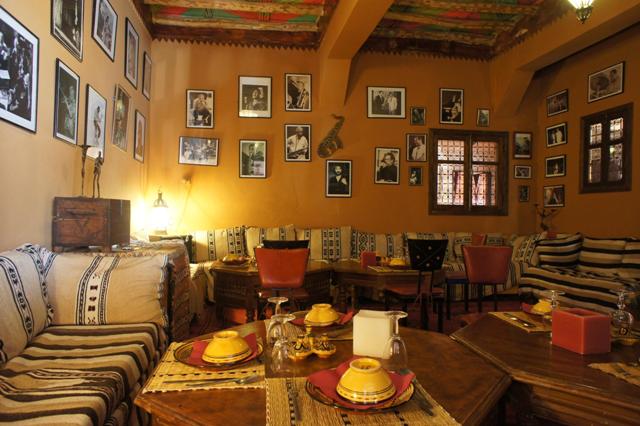 You can apply for Morocco visa at the Morrco Embassy at No.9, Chu Van An, Ba Dinh, Hanoi. The Embassy will issue single –entry visa for you with the time you plan to visit Morocco.

How to get to Ait Benhaddou

You can fly from Vietnam to Morocco with Turkish Airlines, Qatar Airways, or Emirates Airways. Price is around USD800-1300/ round-trip ticket. The flights often transit in Istanbul, Doha or Abu Dhabi before landing to Casablanca, the largest city in this country. From there, you can take bus or train to Ait Benhaddou. We drove from Casablanca to Ait Benhaddou in 7 hours. It would take 9 hours by bus. 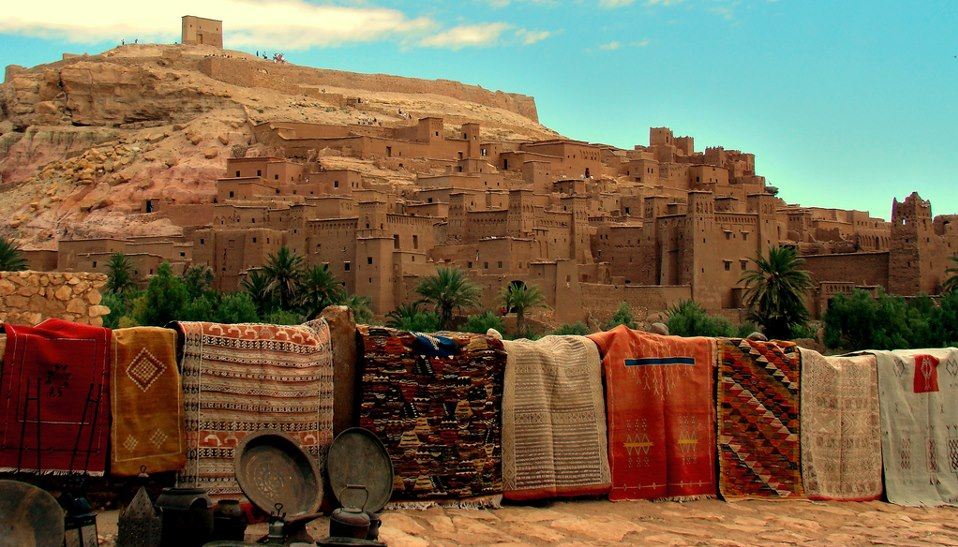 By Train: Marrakech has the nearest train station, you will need a bus or car from this point.

By Car: Ait Ben Haddou is about 10 kilometres from the turnoff to the main Marrekech-Ouarzazate highway. The town is the only thing on this road, and if you miss it (only if you are blind) you will cross a small bridge and end up in another town where the paved road ends.

By Bus: In Marrakech take a bus to Ouarzazate, or from Ouarzazate take a bus to Marrakech, and tell the driver you want to be let off at the intersection to Ait Ben Haddou. This is a busy intersection with shops and a few hotels. Here there will be taxi drivers waiting. You can take your own car or try to wait for other people to share a car. Negotiating your price is important. The drive only takes 10 minutes, and if you are in really good shape, have little baggage, and the weather is good you could walk if you had to. For the return trip, buses come somewhat frequently, so get a car back to the main highway and flag one down. Often the local people will be doing the same thing, and your hotel in Ait Ben Haddou might be able to give you a schedule of Marrakech – Ouarzazate bus services. 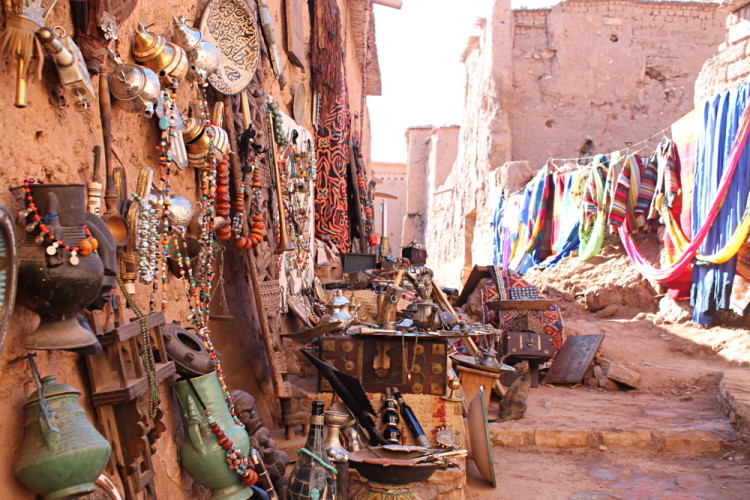 Religion of Morocco is a Muslim country; please notice some issues when travelling there. Traditionally, you shouldn’t use your left hand to do anything in public areas as it’s considered rude. The Moroccans do not like taking photos, especially women and the old. Therefore, you should ask their permission first. Most mosques in Morocco do not allow non-Mulism international visitors to come in, except for Hassan II in Casablanca. 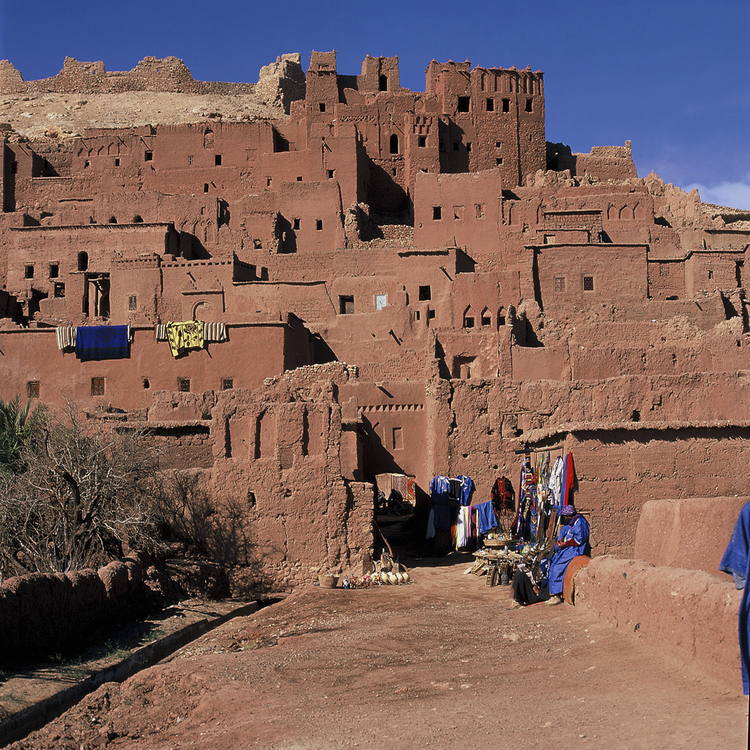 Aït Benhaddou lies along the former caravan route between the Sahara and Marrakech in present-day Morocco. Therefore, it was likely a popular place for traders to rest along the Trans-Saharan Trade Route, especially due to the fortified Ksar of Ait-Ben-Haddou, which they would have considered as safe from robbers and pillagers. However, the oldest building found in Ait-Ben-Haddou does not appear to be built earlier than the 17th century, although the decline of the Trans-Saharan trade began by the 16th century where fortified cities like the Aït Benhaddou began to lose their importance. It is therefore considered to have also been a center of local power in that time period, thus resulting in its slower decline than in other parts of the region. 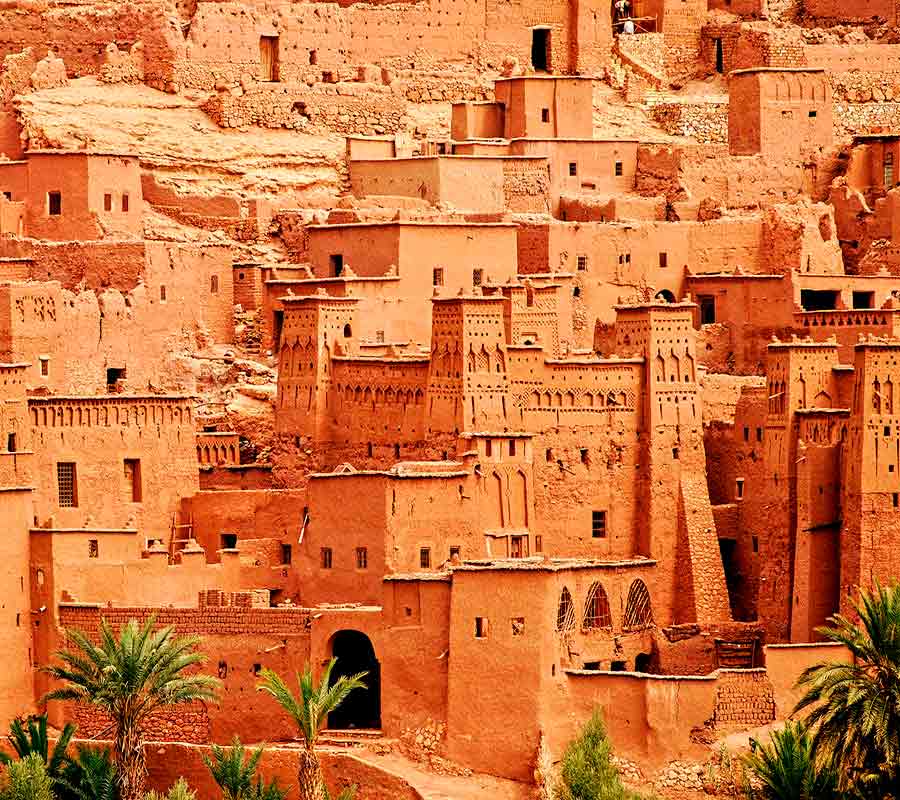 There is also an interesting local belief that the Ksar of Ait-Ben-Haddouwas founded in 757 A.D. by Ben-Haddou, whose tomb is said to lie somewhere behind the city. However, although the building techniques used in the construction of the fortified Ksar of AïtBenhaddou can be traced to a very early period in the valleys of Southern Morocco, the buildings themselves appear to be built only in the 17th century. 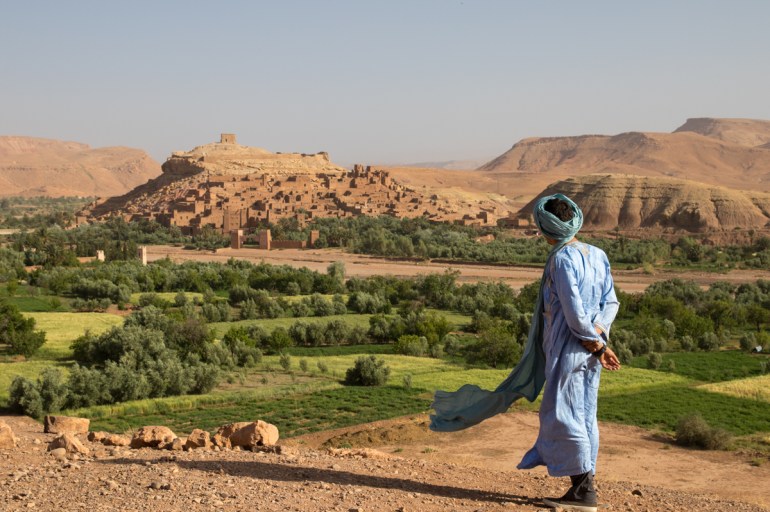 Travelers can enter the village through the main entrance, where 10 Dirhams per person is charged as a donation towards the restoration of the Ksar of Ait-Ben-Haddou. There are also other entrances that can be used, but the locals may charge tourists more to use these entrances. Just check and make sure you do not get into unwanted situations.

The Kasbah, or old Moroccan style fortress, is open to the public and has a small entrance fee. It is reached by crossing the seasonal river, which may or may not be flowing. If it is flowing, local men with donkeys and camels will offer to take you across the river for a fee. Negotiate and don’t be afraid to take your shoes off and get wet. Simply taking your shoes off should lower the price if you don’t really want to walk. 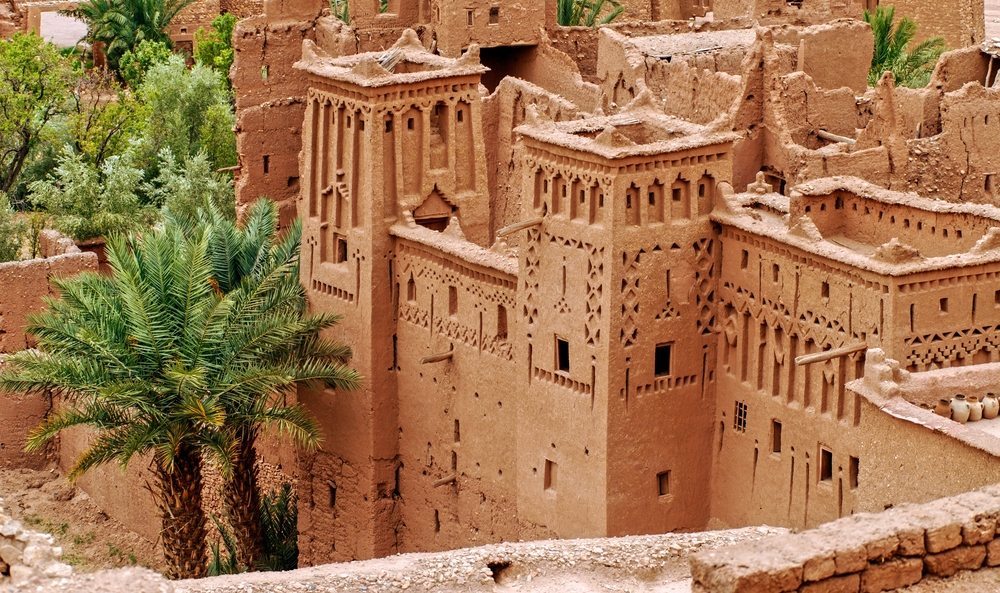 The fortress is more of a town sitting on the side of a hill, and you can climb your way through and up to the top for the terrific views of the surrounding mountains. A few artists have small shops in the town, and a few people still live there. The film Gladiator was filmed here, and can be credited for much of the restoration of the Kasbah, although the arena constructed for the film has been torn down.

A few hours walk up river and down river are two other towns. Up river is another town with an equally impressive Kasbah with a surrounding garden area, although it is smaller. Downriver, the town sees hardly any tourists. The locals are extremely friendly and welcoming, although the Kasbah here is in a sad state of disrepair. 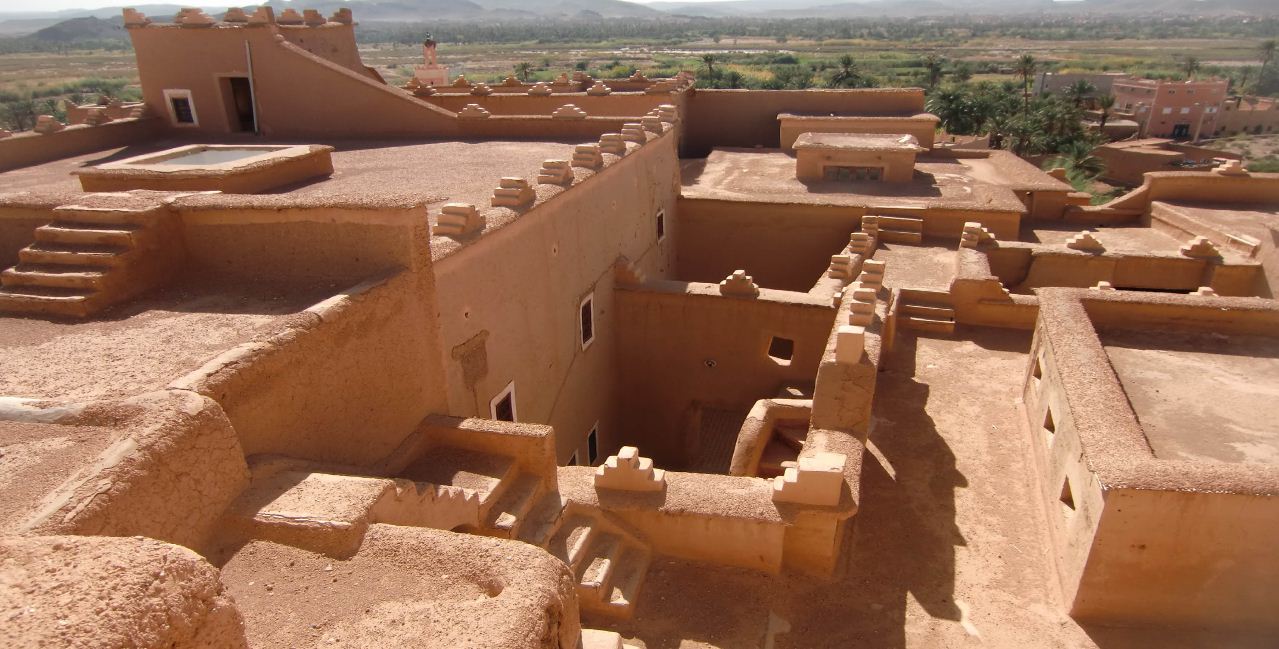 Some best day tours, trips, activities and transfer services, tickets in, from and to Morocco you can refer to 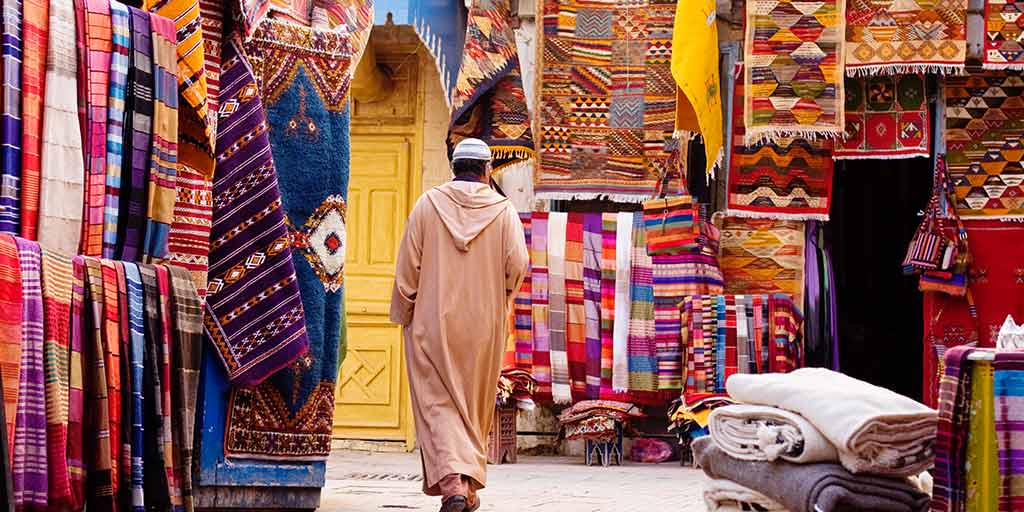 Are you looking for more top things to do in Morocco: Tours, activities, attractions and other things? Read more: Read more: Morocco 7 days itinerary — How to spend 7 days in Morocco perfectly to visit: Fez, Chefchaouen & Tangier. And Let’s check it out here.