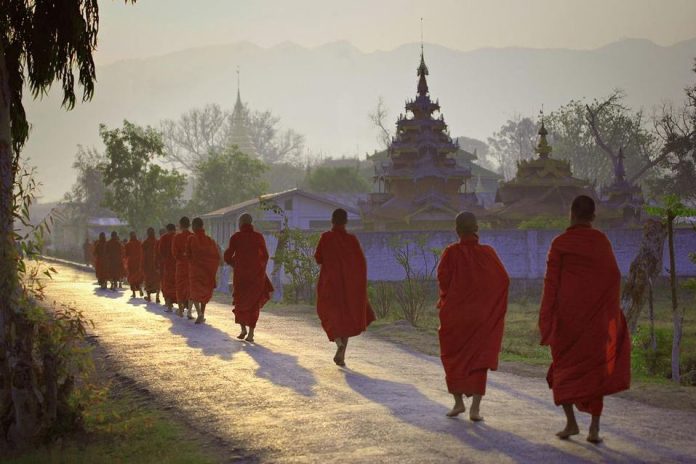 Each country has its own customs and rules, and so does Myanmar (also known as Burma). Therefore, if you don’t want to be considered an impolite person when coming to this country, you should never do 10 things below. Let’s find Myanmar etiquette and Myanmar manners: What not to do in Myanmar — 10 things every traveler should avoid while visiting Myanmar with Living Nomads below.

1. Do not touch someone’s head

In Burmese conception, the head is always considered to be the most sacred part of the body. So, touching someone’s head (even in a friendly way) is also considered, by the Burmese, to be an extremely bad act. Even with the adorable children here, you should not touch their heads as well.

2. Do not point someone’s foot

Similar to touching the head, the act of pointing to the foot of anyone or anything, especially the foot of the Buddha statue in Myanmar, is considered to be extremely rude. Because the feet are the most vulgar part of the body. In addition, when coming to this country, you should not put your foot on the furniture.

If you travel to Myanmar, you need to remember this rule, that’s always using your right hand when picking up the food, or taking the items because the left hand is a vulgar, unclean part of the body. While eating, the Burmese will always use their right hand, not their left. In their conception, the left hand is used to do the daily personal hygiene things, so it is definitely not used for eating.

4. Have a good attitude

Respecting the monks (also called Sangha in Burmese) and the elderly, being interested in the children are all the age-old practices in Myanmar. When meeting the monks, you should clasp your hands instead of shaking hands with them. Also, if you come to a Burmese family, you should leave your shoes outside before entering the house.

5. Do not wear shoes in pagodas or temples

In Myanmar, when coming to temples and pagodas, visitors should leave their shoes or slippers (including socks) outside before entering. This act, first of all, is to show your respect for the spiritual destinations and is to keep the sanctuaries clean. Local people are devout Buddhists, that’s why wearing shoes or slippers in the sanctuaries is considered a disrespectful act.

6. Do not climb the temples

Tourists are not allowed to eat or sleep at the temples, pagodas and other religious works in Myanmar. However, because the sunset and sunrise in Bagan are so beautiful, many foreign visitors are still defying the rules to climb the temples in order to have a better view. Before visiting any temple or pagoda, you should also find out whether climbing is permitted there or not.

7. Do not show your bare knees and shoulders when visiting religious works

Before visiting religious sites in Myanmar, visitors should wear clothes that cover their knees and shoulders up. Even in Bagan city, where there are many temples and shrines that don’t have any guard, visitors should also abide by this rule, because if not, they will receive the bad look of the locals or be invited out of the temple. Some places even don’t allow women to approach the altar or directly put the incense in the temples.

8. Do not ask women about their marriage or family

While coming to Myanmar, tourists should not ask local women about their family, husband, and children because about 30% of women in big cities of Myanmar don’t get married, especially with the clerk here, the rate is getting up to 50%.

As a nation with a majority of the population is Buddhist, in Myanmar, people don’t accept embracing, expressing feelings excessively in public places.

10. Do not stay in hotels and guest houses that are not registered with the authorities

All the selections of hotels, motels or guesthouses of tourists must be registered with the Myanmar Tourism Administration, therefore, tourists who come to Myanmar for the first time will have to fill in a form about the hotel or the motel that they will stay in. And that’s why visitors should book the room in advance to avoid the hassle and get a cheaper deal.