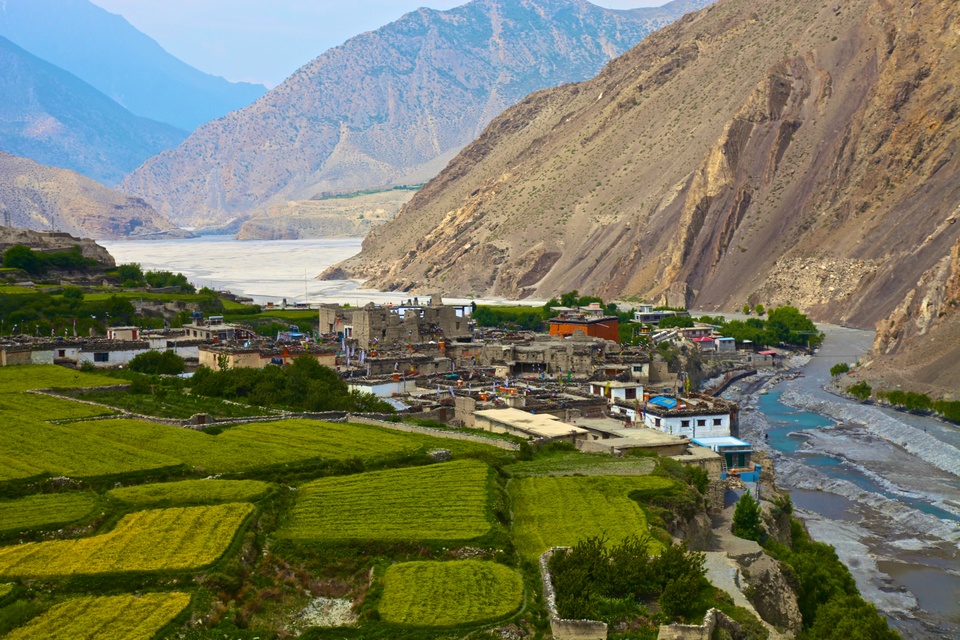 Marsyangdi River is at the east of Mustang while the deepest canyon in the world created by the wild water of the Kaligandaki River is at the west of Mustang. The Mustang (also known as the Kingdom of Lo) is infused with the ancient cultures of the Gurung in the south, Thakalis in the Jomsom region, Managis in the east and Tibetan Buddhism in the north.

“The Kingdom of Lo” or “Upper Mustang” is still a mystery due to the policy of restricting travel and expensive permits of the Nepal government This can be considered as the last example of Tibetan culture in Nepal, as this area used to be part of the Tibetan empire and is thus closely related to Tibet. Tibetan Buddhism is still practiced in a very pure form, the villages are built in Tibetan style until these days.

Mustang is probably the only place in the world where traditional Tibetan culture is preserved without interference and control from outside.

The Mustang can be subdivided into two climate zones and natural scenery: the lowlands have fertile land and the upper reaches of the Tibetan border mostly covered with rocky terrain. The trekking route leads people through the deepest and most steep canyons in the world: Kali Gandaki. 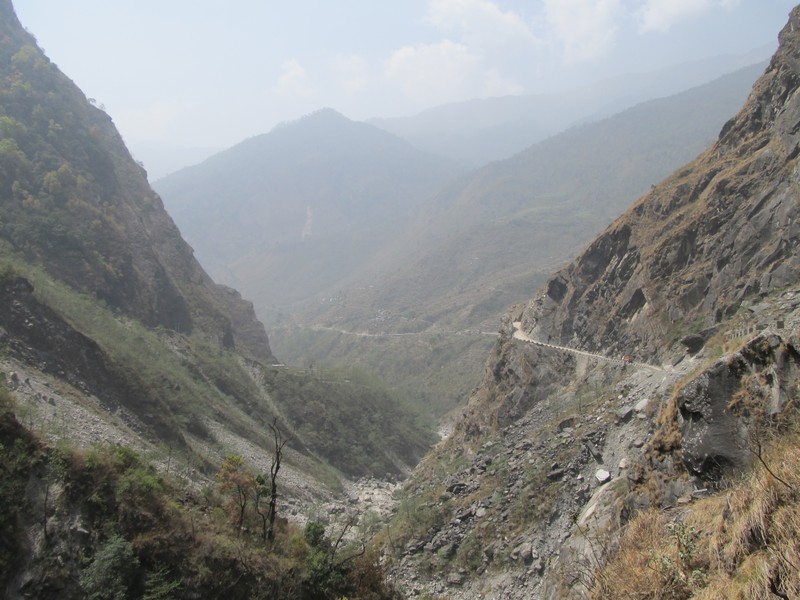 The contrast between the deepest canyons on the upper side is made from two of the world’s highest mountains, Annapurna I (8,078 m) and Dhaulagiri I (8,172 m), leaving a deep impression of the natural giant to visitors.

The southern part of the Mustang is called Thak Khola, or “Border Valley”, which is covered by lush wheat, barley, and corn fields. Indigenous people are mainly from the Thakali ethnic group, well-known for their trade and are now living mainly through services for tourists and pilgrims.

Attractions and things to do in Mustang

Tukche and Marpha are two of the poorest and most beautiful villages in Nepal. Tukche was the most important trading village of Thakali in the Himalayas. Large stone houses are used as storage for salt and cereals. The vacant land in the center of the village, now a school playground, was once a vibrant market where local traders met Indian and Tibetan merchants to trade goods.

Two hours’ walk to the north, you will get to The Martha Village that boasts a unique medieval drainage system running under shanty streets. The roofs of the house look flatter and are stacked with wood collected during the summer months. Both villages are full of Tibetan Buddhists or worth visited monasteries.

The other side of the river from Marpha village is Chairo village, a refugee settlement with a small school and several traditional souvenir shops.

Jomsom is the administrative capital of the entire Mustang region. There is a small domestic airport to Pokhara, which has the town of Dakardzong, an army station as well as many office buildings and countless rest houses, restaurants and shops for tourists.

From there, Kagbeni village is just a few hours northward, it is the final settlement of the lower Mustang area that is not restricted. (Note: The Upper Mustang area requires a special permit to enter). Situated at the confluence of two rivers, the village of Kagbeni symbolizes luck and has long been an important trade. This village is one of the most authentic Tibetan villages in all villages of the lower part of Mustang.

Once coming here, let treat yourself well with a cup of yak butter tea under gray stone roofs while beholding the sunset, you will get a good sense of the Tibetan life that has existed for centuries.

To the east of Kag, the upward slope is the most important pilgrimage site in the Nepalese mountains. It is called Mukininath, literally “Savior”, because people find a temple dedicated to Vishnu, the God of Conservation, or the Incarnate One of Hinduism. It is believed that many temples at Muktinath have the presence of supernatural beings as well as imprints throughout history.

At Jwala Mai Temple, pilgrims worship a never-ending flame, lit by natural gases deep in the core of the earth. It represents Agni, the god of fire, an important element in the Hindu Vedic ritual. Although the temple population is mainly Hindu, local Buddhists also have their own place of worship. Local people believe that Padmasambhava, who was responsible for bringing Buddhism to Tibet, visited Muktinath in the 8th century.

Between Kagbeni and Muktinath, when you keep going up a few kilometers, a small village with breathtaking scenery will catch your eye. The most notable is the Dzar – Jharkot, a great place to get a panoramic view of Muktinath valley and Kali Gandaki alley.

If you have the time, try searching for shaligrams – spiral fossils dating back to 140 million years. The shaligrams are fossilized remains of prehistoric ammonium, a mollusk that once lived in the Tethys Sea before the continental collision created the Himalayas. Because of their unique spiral shape, they are worshiped as the mortal manifestations of the god Vishnu and thus are especially sought by Hindu pilgrims.

The northern part of Kagbeni is the restricted area of the Upper Mustang. To enter this area, you will need to travel with a group organized by tour operators and get a permit in Kathmandu at a super high price, $ 500 for a 10-day stay. It also be more likely to be escorted by a Special Forces Police officer because the area is still considered politically sensitive. For those who are still determined to come here, all the things in preparation you need to know will make your trip a real expedition.

Lo Manthang is the stone fortress of the Kingdom of Lo in the Upper Mustang. The best way to go to Lo Manthang is by horse. The local horse here is not only very healthy but also able to adapt to good heights. They are the only “means” of transportation here except for walking. 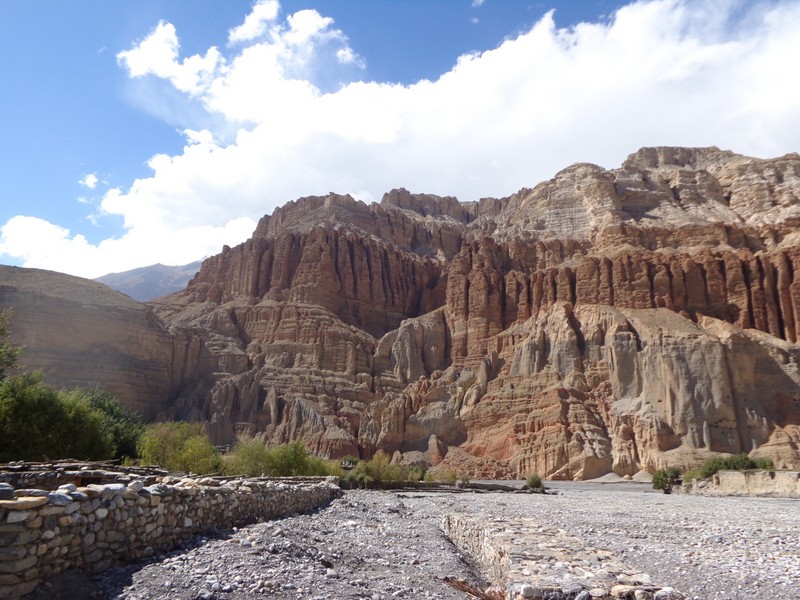 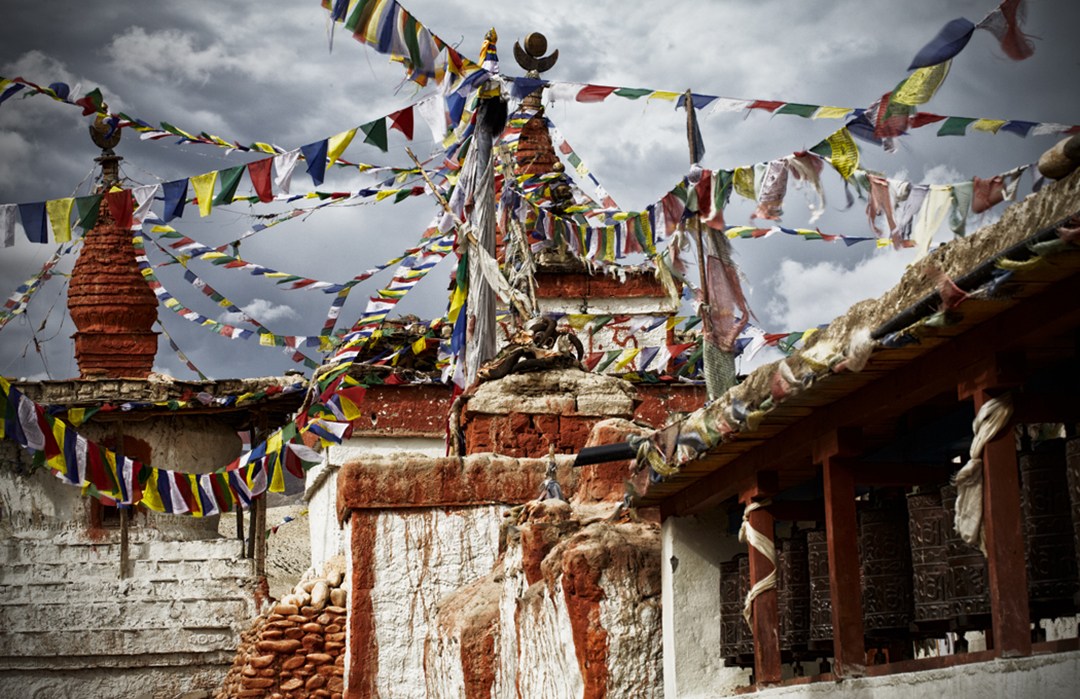 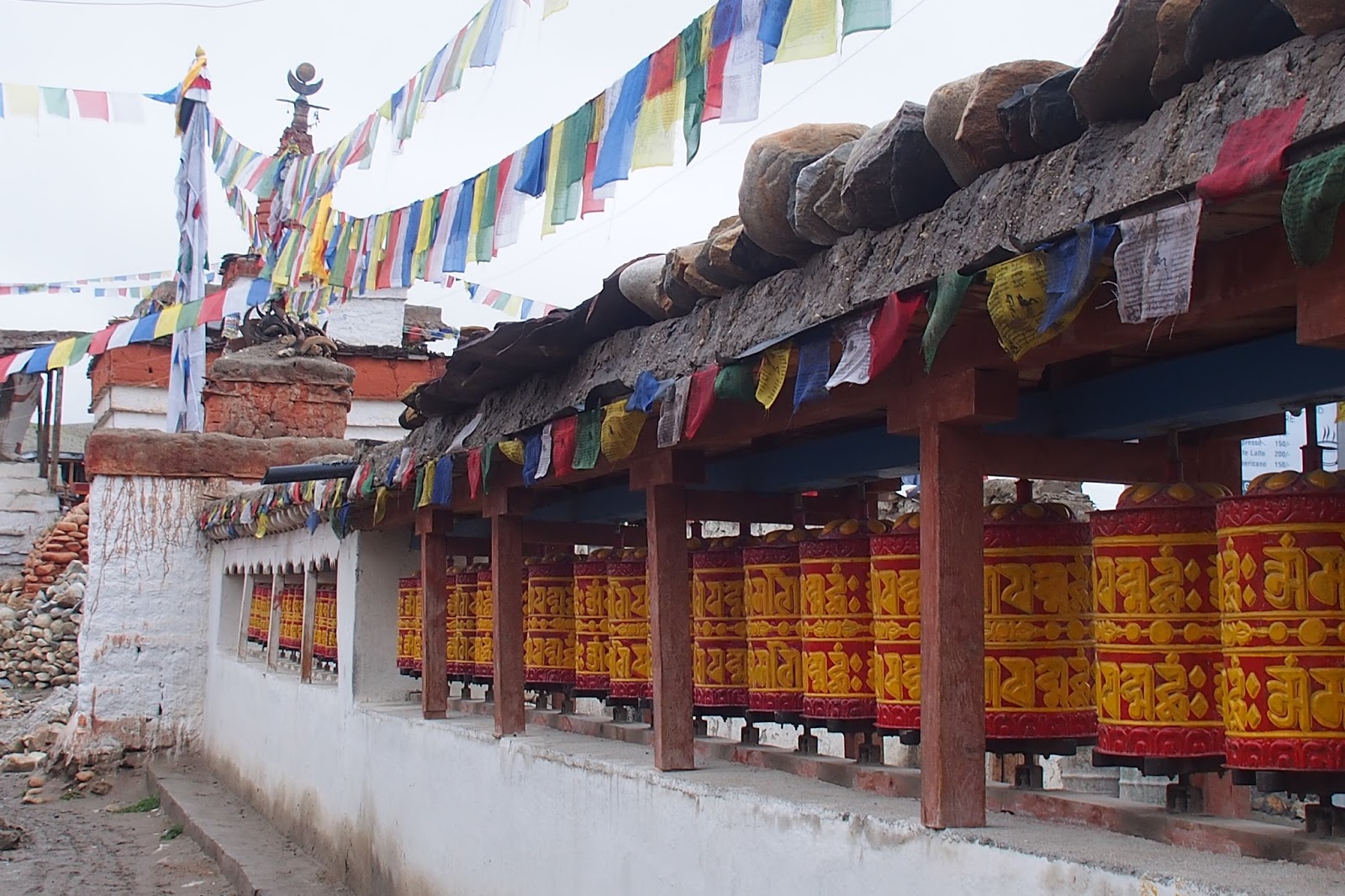 On the way to the magnificent Lo Manthang, there are many other wonders for those who go into the small valleys. One of the most spectacular places is the Luri Temple carved into the towering rock. The climb is quite steep and rocky, but very worthwhile.

Not to mention every village along the way here is wonderful and special. You will find many monasteries, towers, or sacred sites such as Tangbe, Samar and Tsarang. However, the spiritual journey is only complete when you set your food at three temples in Lo Manthang. At the Jampa Temple, there is a statue of the Buddha, or Maitreya, one of the largest statues in Nepal that is a must-see. 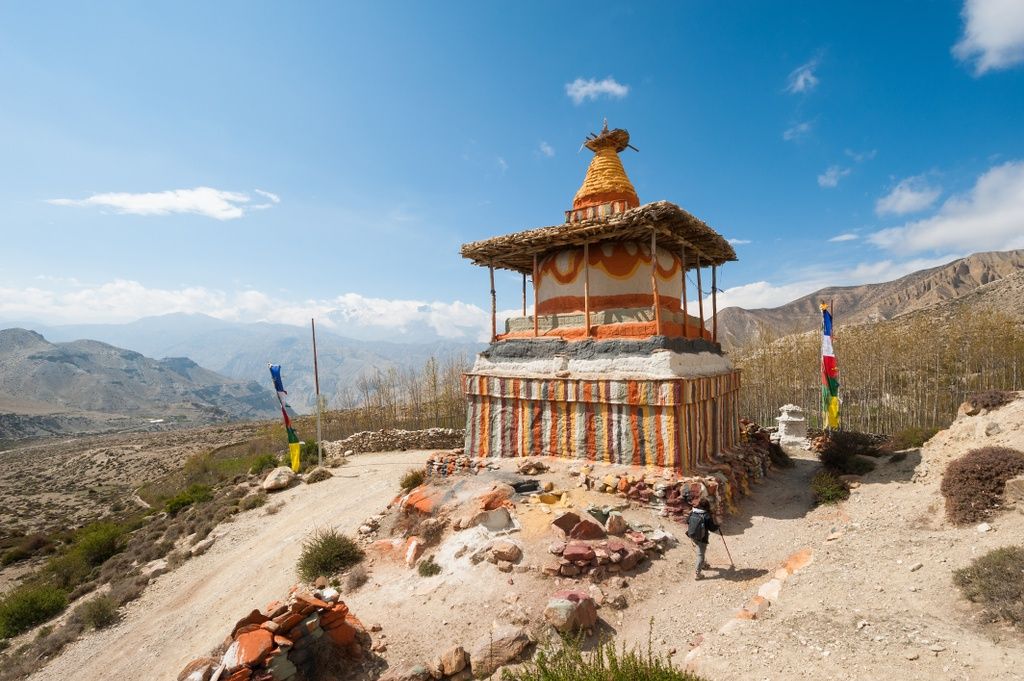 The kings of Mustang are always interested in Buddhism. Around 1425, the first great king of Lo – Amepal founded the city and brought about 108 Buddhist scriptures made by gold and silver, remaining in the royal chapel. In the halls of the Thubchen monastery, the pillars are more than 30 feet high and the mural has now been restored by artists and experts from both Nepal and the West. 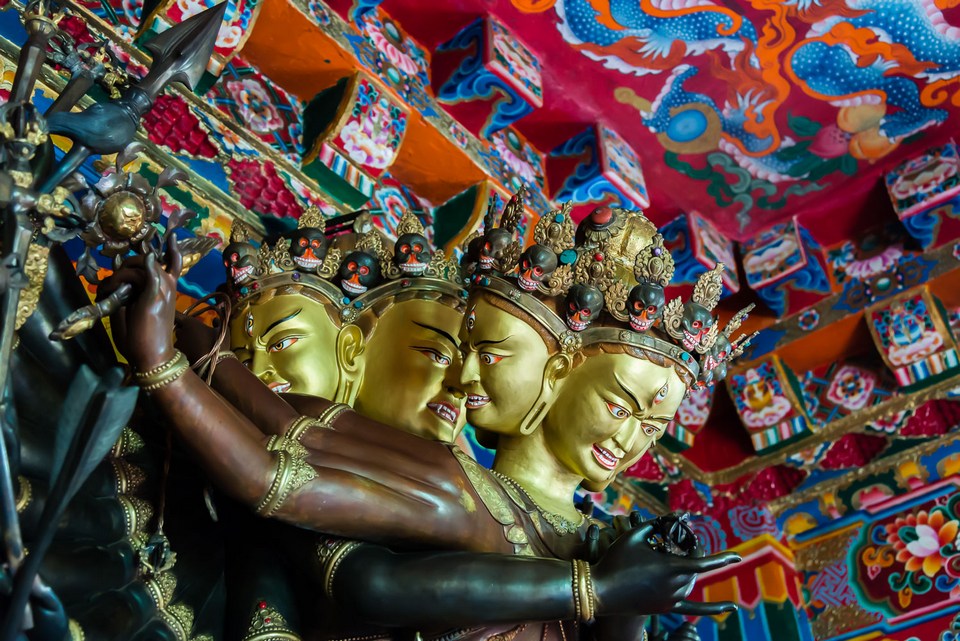 After all, Mustang continues to be a place of spiritual peace with breathtaking natural scenery. If you are interested in Buddhist art and culture and want to know more about Himalayan history, Mustang will be a perfect destination. The surreal beauty of the Tibetan plateau, the ancient spiritual markings, the wind above the head and the dust at the feet, this place deserves to be a trek of life. 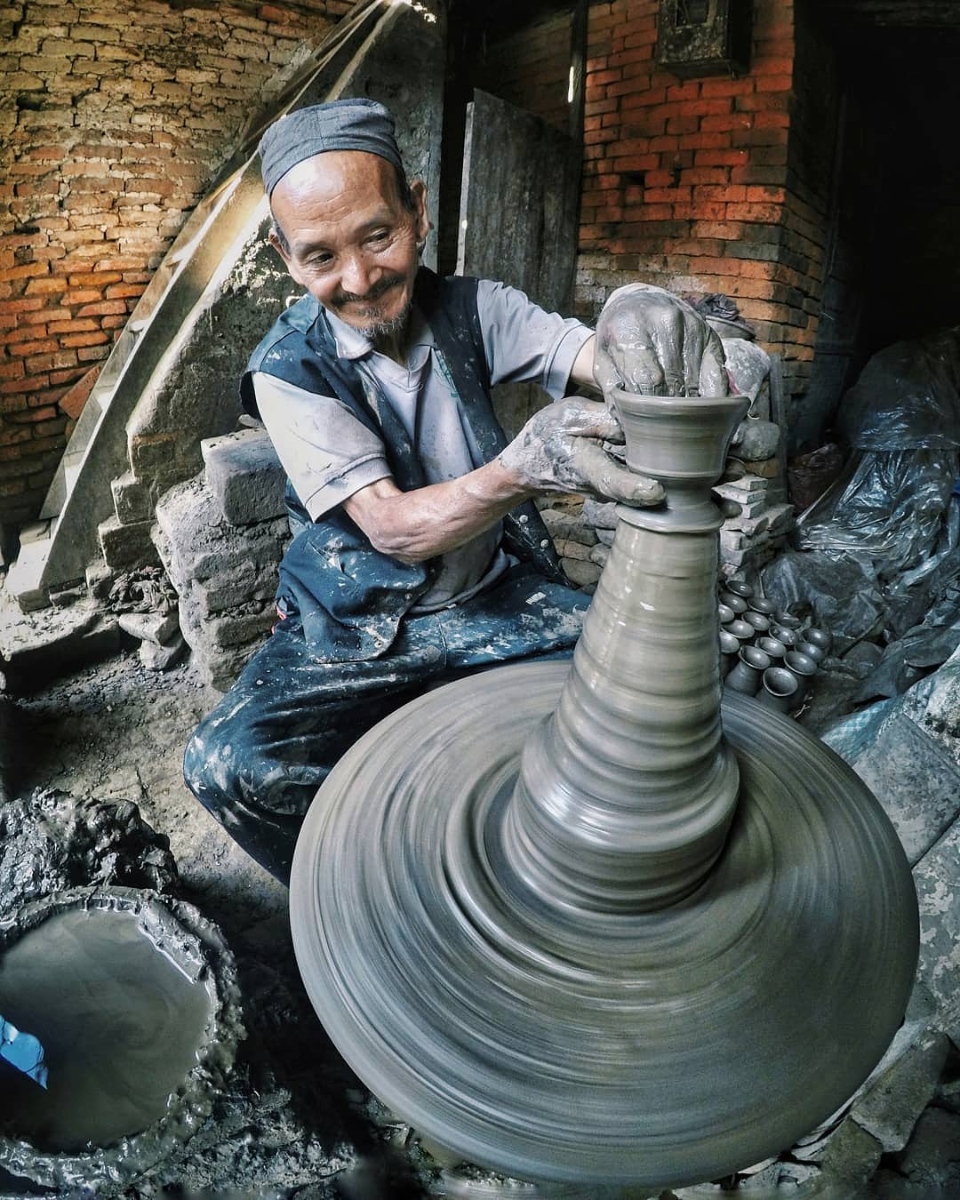 Some best day tours, trips, activities and transfer services, tickets in, from and to Kathmandu you can refer to 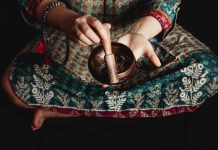