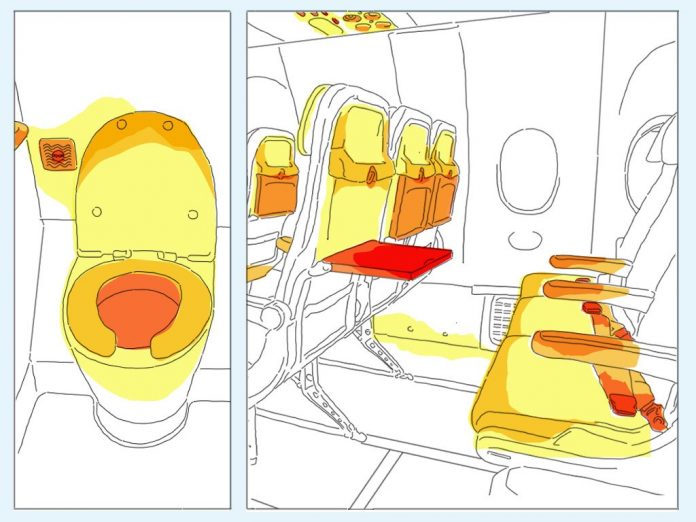 Pack your hand sanitizer: A study reveals that the toilet seat on an airplane is less disgusting than the tray table where you’ll eat your meals.

The fanatically germ-phobic, Purell-toting segment of the population may already be in the know, but this Hot Zone–style map of bacteria in airplanes and airports, inspired by a National Science Foundation study and broken down by TravelMath.com, had even the indifferent among us gagging a little at our desks.

In airports, as our illustration shows (red = the worst), the germiest spots included…well, basically anywhere you’d put your hand. The highest concentrations of bacteria were found on drinking-fountain handles and lavatory flush levers, but the levels are not what you might expect: The water-fountain bars harbored more than four and a half times as many pathogens as the toilet flushers.

Once you’re on the plane, you’re right back in the petri dish. The bowl of the plane’s lavatory toilet—no surprise there—as well as its flush button were teeming with bacteria. Perhaps most shocking (and gross) is the fact that tray tables harbor the most bacteria. Yes, the place where you eat your food is nearly ten times as dirty as the toilet flush button. Fasten your seatbelts (the buckles of which are about nine times less dirty as your tray table), and keep your hands in your pockets after that.

If you dare, read on for the extended report, “Airline Hygiene Exposed“—and for more dirty surfaces you never even considered—at TravelMath.com.