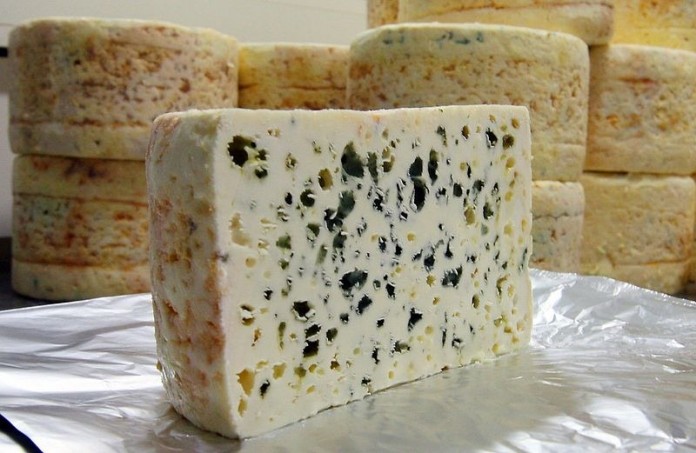 The pungent odor and tangy taste of the Roquefort cheese, with its distinctive spots and veins of blue-green mold throughout, is not for everyone. But those who appreciate cheese swear it’s the best blue cheese in the world. While you may not agree, Roquefort is officially known as ‘the king of cheeses.‘

This particular cheese is produced in the tiny village of Roquefort-sur-Soulzon, located amidst the high limestone plateaus of Causse du Larzac, in southern France, where erosion has made the mountain as hollow as cheese itself. Inside these dank and dark natural caves, where humidity stays above 90%, unpasteurized, whole ewe’s milk is slowly ripened and molded into Roquefort cheese, following century-old methods.

The mold that gives Roquefort its distinctive character is a fungus called Penicillium roqueforti, that is found in the soil of the caves. Traditionally, the cheesemakers harvested it by leaving bread in the caves for six to eight weeks until it was consumed by the mold. The interior of the bread was then dried to produce a powder which was added to cheese curd. Nowadays, the spores are grown in laboratory, which allows for greater consistency ensuring that the three million wheels of cheese made each year are uniformly veined.

Legend has it that the cheese was discovered when a young sphered, eating his lunch of bread and ewes’ milk cheese, saw a beautiful maiden in the distance. Abandoning his meal in a nearby cave, he ran to meet her. Months later he happened to find his old lunch grown moldy inside and out. But the shepherd tasted it anyway, and Roquefort cheese was born.

While the story of the sphered is probably a fable, the cheese might actually have been discovered by accident, when cheeses stored in caves developed mold. It is claimed that blue cheese is mentioned in literature as far back as AD 79, when the Roman author and naturalist, Pliny the Elder remarked upon its rich flavor.

Roquefort cheese is still created in chilly, damp caves owned by only seven cheese-making companies, the largest of which is Société, which supplies an estimated 70 percent of the world’s Roquefort. Société holds several caves in the mountains and its facilities are open to tourists.

See more photo of cheese kingdom of Roquefort in France 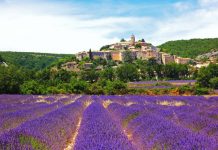 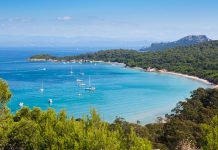