Immerse yourself in epic landscapes, like Ecuador’s ‘valley of the volcanoes‘ or Oman’s spectacular coast; celebrate history and culture in England, Albuquerque and the Pacific; and embrace new beginnings in Thailand, where a giant water fight marks the start of a new year.

1. Celebrate independence in Ecuador’s ‘valley of the volcanoes’

Tucked away in the Andes, Ecuador’s colonial town of Riobamba charms visitors with its cobblestone streets, Spanish-style architecture and large arcaded plazas, and is a favourite base for trekkers and climbers due to its proximity to many of the country’s best hikes and tallest mountains. Known as the ‘valley of the volcanoes’, the area is nestled between four of South America’s largest: Chimborazo, Carihuazo, El Altar and Tungurahua.

April 21 marks 194 years since the Battle of Riobamba, considered by some historians as one of the wildest combats in South America’s fight for freedom from the Spanish (Ecuador gained independence from the crown just one month later), and locals celebrate with lively concerts and colourful parades.

Riobamba has the highest percentage of indigenous people in the country, many of whom come in from the surrounding areas to sell their wares – the town has a great weekly market on Saturdays, where you can find handwoven clothing, textiles, ornaments and pottery. And for a small town, Riobamba boasts a surprisingly bustling nightlife due to its large student population – it has more universities per capita than anywhere else in Ecuador.

If you’re headed to Thailand in mid-April, prepare to get wet.

Known as Songkran, the Lunar New Year in Thailand (13-15 April) is celebrated with a nationwide water fight. Traditionally, the custom is to ‘bathe’ images of the Buddha in rosewater and pour water gently over monks and elders, but the celebration has evolved into an all-out water-splashing free-for-all, with tourists encouraged to join the revelry.

For the three days of the celebration (or five days in Songkran epicentres like Bangkok and Chiang Mai) nobody across Thailand is safe from a dousing. Water balloons are launched at unsuspecting participants, hoses are turned on passers-by, and high-powered water guns are fired from bicycles, motorbikes and cars at pedestrians and other vehicles. Either arm yourself with a water pistol and enjoy the opportunity to cool off during the hottest time of the year, or run for cover.

Oman is the kind of place road trippers fantasize about, with routes that gently hug the coast, zig-zag through spectacular mountains, or take you on wild, off-road adventures from wadi to wadi.

It’s now possible to drive along almost the entire coast of the country, from the capital of Muscat right down to tropical Salalah ­– you’ll need at least three days. This journey takes in the recently opened road from Shwaymiyah to Hasik, which winds its way through the moody mountain scenery of Jebel Samhan.

April is a fabulous time to go – temperatures will be hot but not yet at the searing highs of summer, so camping is a possibility if you want to stretch out the journey a little longer. Allow extra time to check out the pink lagoons of Al Khalil, the ancient rock formations of Wadi Shuhram and traditional Barasti fishing villages along the way.

For a chance to see the world’s largest gathering of Native American dancers, singers and craftspeople, head to Albuquerque in April. Running on the 29th and 30th only, the Gathering of Nations (gatheringofnations.com) brings together nearly 3000 Native Americans from over 500 different tribes across North America.

Begin the weekend with Saturday’s Grand Entry, a raucous display of colour, feather headdresses and tribal drums as everyone converges on the floor of the WisePies Arena at the University of New Mexico campus. The event continues through the weekend with dance competitions, drumming contests and the crowning of Miss Indian World.

If you’re planning a trip to the South Pacific, you wouldn’t want to miss the annual Naghol land diving ceremonies that take place every Saturday through April and May on Vanuatu’s Pentecost island.

Each year, men from the Sa tribe erect a 98ft wooden tower, climb to the top and jump off, attached only by jungle vines tied around their ankles. If the vine is too short, the land diver will bounce back onto the tower; too long and he might just plunge to his death.

Before a man dives, he airs his grievances and makes amends atop the platform, so that in case of mishaps, he dies with a clean slate. Today, it’s considered a male fertility ritual and a rite of passage for many young boys from the Sa tribe. Only a small group of tourists are allowed to watch the land diving spectacle, so plan ahead and contact the tourism board.

No one knows what killed William Shakespeare in April 1616, mere weeks after he declared that he was in ‘perfect health’. He left us 37 plays, 154 sonnets, and what many would argue is literature’s greatest legacy.

Shakespeare spent his last 19 years in New Place, a grand house in Stratford-Upon-Avon, since demolished by an irate 18th-century vicar. The visitor centre’s April reopening has been delayed due to the unexpected discovery of Shakespeare’s kitchen during ground works (good news for archaeologists!) – but there will still be plenty going on to celebrate the 400th anniversary of the Bard’s death. The Royal Shakespeare Company is presenting major new exhibitions, as well as restoring the 19th-century Swan Theatre and putting on Hamlet and A Midsummer Night’s Dream. Shakespeare’s birthplace and grave are also popular attractions, and this year his old school room is being opened up too. 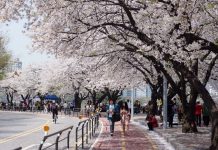 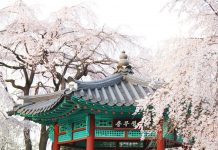