Prague and Budapest were the first two Eastern European cities I visited. It was from these two cities that my curiosity about Eastern Europe skyrocketed. Although I really like Western Europe: A majestic of France, an ancient of Italy, a rich and modern of Switzerland, a dynamic and simple of Germany, a creative and contradictory of the Netherlands, a cutely small and chaotic of Belgium,… But they all have one thing in common: Too touristy, sometimes overcrowded. Meanwhile, Eastern Europe stands out with the grandeur of history and the uniqueness of architecture, along with the locality that is still sharp today. However, it must be clear that Prague is also horribly “trampled” by tourists. So in this article, I will list some my own personal experiences and things that I think you need to know before visiting Prague, hopefully it will be useful for those who are preparing for a journey to Prague. So, what to know before going to Prague? Let’s check out our Prague travel tips blog with 12 tips for visiting Prague (Prague tips, tips for Prague, Prague insider tips) and things to know before visiting Prague to help you planning a perfect trip to the capital of the Czech Republic (Czechia) dubbed “the City of a Hundred Spires”.

Prague travel tips blog: The Vietnamese community is considered an ethnic minority in the Czech Republic

Prague tips: If you are craving for Vietnamese food, head to Sapa market of Vietnamese people

After the Czech Velvet Revolution, the Vietnamese acquired a large land to build infrastructure for the Vietnamese community to live and develop. Coming to Sapa market, you can find all kinds of services, foods and products of Vietnam. It’s like a wholesale market and a community house. For me, being away from home for a long time, so I misses Vietnamese food a lot, this is a place on the “must-visit” list when visiting the Czech Republic. Honestly, the food here is more flavors of the south, many dishes are a bit sweet (because the Southern Vietnam cuisine leans toward sweet taste. Or maybe I chose to go to Southern restaurants? (In fact, Vietnamese food in Europe has a lot of Southern flavor. It was the same when I lived in Amsterdam, it was super sweet when I ate Pho (beef noodle soup). Or so was in Poland).

What to do when going to Sapa market? You will try the whole world of Vietnamese foods, likes these dishes below.

I remember one day I was talking with an uncle Czech friend. He knew we were Vietnamese, he told me, Sapa market is considered an autonomous region. The Czech government did not intervene. There were times when gangs were shooting at each other in there, but they all sank before the government could solve anything… It’s a bit scary to hear that. I don’t know if it’s true or is he exaggerating?

You can visit Sapa market once to know what the life of Vietnamese people in foreign countries is like. To get here, take bus 113 at Kacerov metro station (or bus 197 at Smítovské nadraží stop) to Sídliště Písnice stop. Getting of here, walk a bit, you will see the huge sign of “TTTM Sapa” right at the entrance gate. The trip takes about 1 hour. A bit tired but well worth it. I ate “already” a round of the market, explored all day. Some of them even asked me came here to visit, study or do something, just come here if you need any help.

What to know before going to Prague: Czech use Crown (CZK) as currency not Euro

In the Czech Republic, cash is still more popular than cards. Many restaurants, bars, and services still prefer cash even if they accept cards. A lot of places don’t accept cards but they don’t have signs to warning. So bring enough cash is very important.

To check the realtime exchange rate, you should use the XE Currency app. This will make it easier to compare with the actual Czech currency exchange rate. However, you must be extremely careful if you see money exchangers offering too favorable exchange rates. They will definitely add an outrageously high money exchange service fee. Always watch closely the last amount exchanged instead of just the exchange rate. And NEVER exchange money on the streets. They may give you old money or worthless Belarusian money.

I visited Prague twice. Both exchange rates fluctuate 1 euro = about 25 or 27CZK.

Tips for visiting Prague: If you want to visit a “real” Prague? Don’t go in summer

Summer is the peak tourist season in the Czech Republic. I understand that everyone has to work all year round, so the obvious travel opportunities are usually only in the summer. But in my opinion, traveling to cities in general or Prague in particular is best to avoid summer. According to my personal experience, summer is more suitable to go to the river, mountain, sea, because the space is large and comfortable. The rest time of spring and autumn, going to the city is the most beautiful, and finally it’s winter.

I went to Prague once in the winter (early winter, at the beginning of the school holidays) and once in the summer. When I visited in winter, it was extremely ideal: deserted, relaxed, the whole city was immersed in romance and ancient breath. Quite the contrary, in the summer, all streets filled with people, hustle and jostle. No step is not touching people at all!

Traveling to the Czech Republic in particular and Eastern Europe in general, the situation of “trapping” or get rid-off tourists by taxis is very popular. If you need to travel but public transport is not reasonable, use Uber or Liftago (a Czech app, only use drivers with a valid license and pay a reasonable fee). Or you can call the hotel to book a car. Don’t pick up a taxi on the street.

Traveling by public transport in Prague

Very simple! The public transport system here is very developed. Buy tickets at newsstands or ticket vending machines for cheap. Do not buy directly from the driver if not reluctantly. A half hour ticket costs about 24CZK, 90 minutes about 32CZK. Like other tourist cities, Prague has a day pass for public transport. One day ticket is about 110CZK.

Things to know before visiting Prague: The attractions located close to each other!

Except for some remote places like Vysehrad cemetery, there is little need to take public transport. Most of Prague’s well-known and famous tourist attractions are located in the Old Town. Walking from one spot to another is incredibly easy. I even think you should traveling on foot. There are many corners that only when taking a leisurely walk can you notice.

Prague insider tips: Why drink water where beer is cheaper than water?!

Czechs absolutely love their beer. In the Czech Republic sometimes beer is cheaper than drink water. Especially at the restaurant. If you like beer, you should take advantage of this country right away. Especially: most of the shops selling alcoholic beverages are Vietnamese owners.

Note: Water in the Czech Republic can be drunk directly from the tap. Most restaurants and bars sell bottled water. Please clearly state that you want tap water to avoid the fee of drink water.

After the peaceful separation of Czechslovakia in 1993, today we have two independent sovereign countries, Czech and Slovakia (not to be confused with Slovenia). Slovakia is much poorer and desolate. I remember there was a comedy Europetrip movie (a movie about a group of American students going to Europe) that mentioned Slovakia very funny. Of course, it’s not so shabby today.

In short, don’t call, mention or refer Czech as Czechslovakia. And Czechs often consider them to be in Central Europe instead of Eastern Europe.

In Eastern Europe, like Hungary, Poland, even Bulgaria or Romania, tipping is common. On this side of Europe, the standard of living is slightly lower, resulting in wages and worker benefits that are not as high as in Northern or Western Europe. So you should tip the waiter, either by rounding the bill or adding 10% to each bill. When paying, give money directly to the waiter, not place it on the table.

Avoid the central area to avoid get stuck like meat in a sandwich!

In fact, this is advice if you travel to the Czech Republic in the summer. The rest of the seasons in Prague are much more relaxed, although still a bit crowded. If you come in the tourist season, it is best to visit the central area with attractions such as the Love Bridge or the central square in the early morning. Then move to other spots to avoid “choking”.

The exception, however, is that, in the evening, the central square is more bustling with locals than the crowded with tourists. Or maybe it’s so dreamy at night that I don’t notice anymore. I see young people in Prague in the evenings often bring beer out to sit in the middle of the square or at the feet of Goethe to meet up. You should try it once. I feel like you are really a part of the city. In addition, there are often music performances in the square at night. The second time I came in the summer, a team even brought the piano out to play all night! 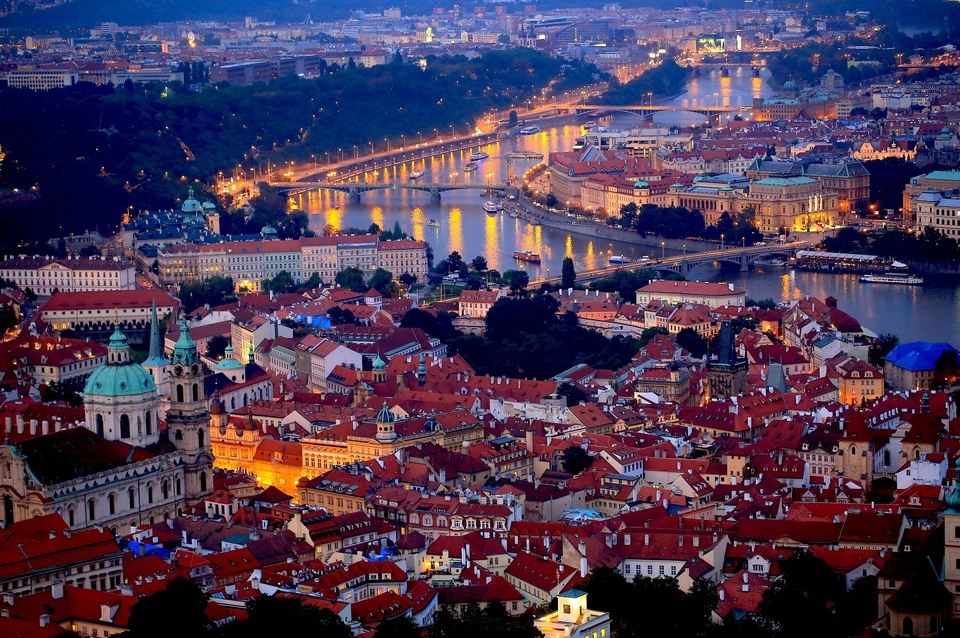 Legend of Absinthe in Prague 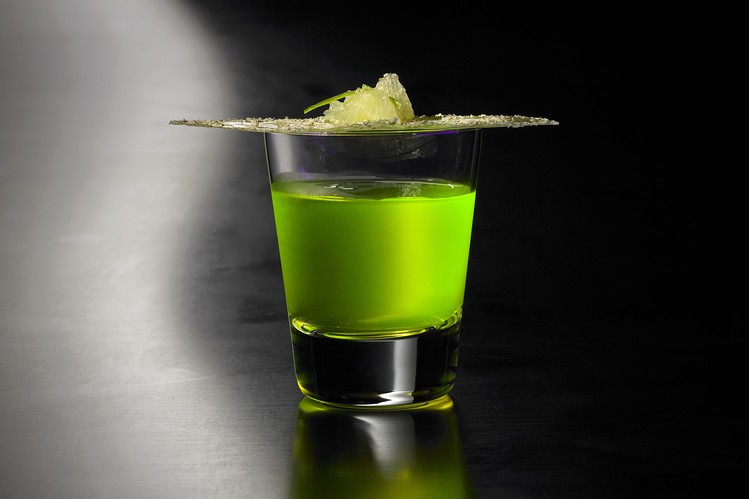 Absinthe in Prague is actually not come from Prague but from… Switzerland. Although Absinthe’s origin is in France. In most other countries, Green Fairy does not contain sage leaf juice – one of the substances that stimulate the central nervous system, which can produce hallucinations. That’s why Absinthe is also Hemingway’s inspiration, Van Gogh’s grief-stricken friend, and the beginning of Oscar Wilde’s stories, etc. However, the Absinthe in Prague does contain a fair amount of sage juice. So Absinthe here is considered to be the closest to the real Absinthe.

However, because of Absinthe’s notoriety, many visitors rush to travel to the Czech Republic to try it. So the price was pushed too much. Should only try Absinthe in Prague if you are not planning to visit France or Switzerland. The rest, you can try the local liquor is Slivovice, 50 degrees of alcohol content – the national drink of the Moravian people. I believe it is strong enough to take down the souls who like to challenge.

Some best day tours, trips, activities and transfer services, tickets in, from and to Prague you can refer to

Are you looking for more Prague travel guide and top things to do in Prague: Tours, activities, attractions and other things? Read more: Prague travel blog — The fullest Prague city guide & suggested Prague itinerary for 2 days on a budget. And Czechia guide here.