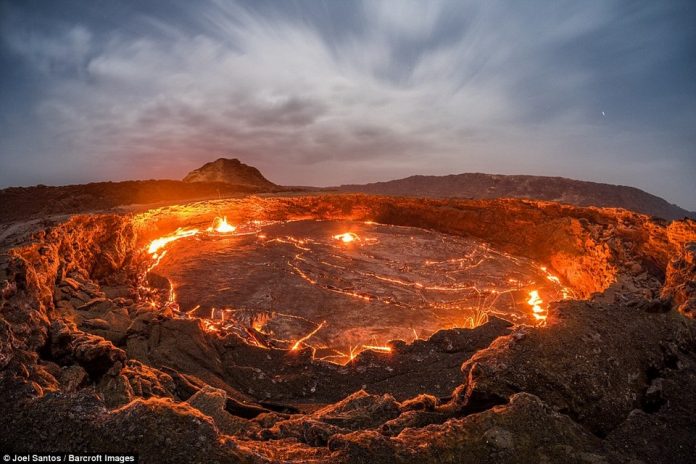 These dramatic images offer a rare glimpse inside the ‘Gateway To Hell’, one of the world’s oldest continuously active lava lakes.

Portuguese travel photographer Joel Santos, 38, piloted a drone over the bubbling lake – which reaches temperatures exceeding 1,100 degrees Celsius – while he stood just a metre from the edge.

The lake, situated in Afar, Ethiopia, has had a continuous flow since 1906 and lies inside the 2,011-foot-high Erta Ale volcano, otherwise known as the Smoking Mountain.

The last major eruption occurred In September 2005, which killed a 250-strong heard of livestock and forced people in the surrounding area to flee.

There were further evacuations in August 2007 caused by lava flow, after which two people went missing. The most recent eruption came in November 2008

Mr Santos is well-aware of the hazards posed by filming such a potentially devastating natural phenomenon at such close quarters.

He tells MailOnline Travel: ‘This was one of the most dangerous projects I’ve done, since I was just 20 metres away from the lava, one metre from the edge.

Take a dangerously close look inside the ‘Gateway To Hell’

‘The real problem in Erta Ale is that the crater rim is always changing as the lava lake moves up and down, and especially when it overflows, changing any previous knowledge you might have had about the terrain.

‘You might think that the ground you’re standing is solid, but equally it might be soft and make you plunge into the lava. You must be very careful.’

Mr Santos used a drone to film his footage from above the lake, alongside four 4K resolution cameras that could handle the scorching conditions around the lake’s rim.

He said: ‘I needed to be so close to monitor the drone, since the heat waves are so, so strong, they could cause it to melt or crash. I had to be very patient.’

Mr Santos added: ‘Every two or three minutes you can hear a small hiss of pressure beneath the volcano and all of a sudden – you can’t predict when – a crack just opens wide.

‘Then it’s like fireworks – the whole volcano starts bursting with lava into the air.’

The Danakil Desert, where the volcano lies, is officially the hottest inhabited place on earth, meaning Mr Santos could only film in the early morning or late at night.

Despite the challenges of filming in such intense heat, Mr Santos is proud to have visited such an epic location on two separate occasions.

He said: ‘It’s a basaltic shield volcano and there’s only six in the world.

‘This is one of those that you can actually approach. It’s an unbelievable experience.

‘It still amazes me how nature works and I think it will continue to amaze me.’

Little is known about Erta Ale, as the surrounding terrain is some of the most inhospitable on Earth, and the natives are said to be hostile towards visitors.

In 2012 a number of tourists were kidnapped, injured and some killed in the area.

Mr Santos explains: ‘The volcano is quite close to the border with Eritrea, with whom Ethiopia has a very difficult relationship, as it is known.

‘Since then, an Ethiopian military camp site was established nearby and you must now always have a military escort with you while you climb up to the volcano.

‘But, at least to me, they were extremely friendly and helpful with finding the most secure places to set up the tripods. They have an excellent knowledge about the terrain.’

In 2009, BBC TV show The Hottest Place On Earth went there to record a world first 3D laser image of the volcano. Durham University earth scientist Dr Dougal Jerram and a team from the BBC explored the surrounding desert.

He later wrote for BBC News: ‘Like a true journey to the centre of the Earth, volcanoes provide a unique window into our planet’s interior.

‘Standing at the lip of the lava lake you can see why the locals see this as “The Gateway to Hell”, as the incandescent bubbling lava lake hisses like some badly burned porridge cauldron, overturning and occasionally belching molten lava.’