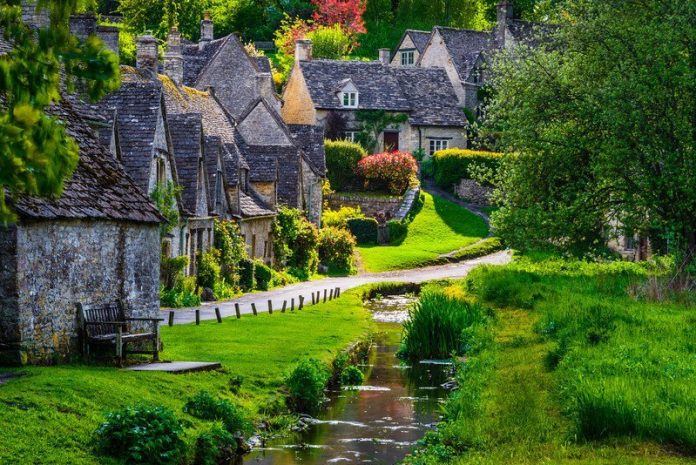 Forget whatever you’ve got planned for fall, because we found the trip you need to take. Head to Bibury — also known as “the most beautiful village in England.”

Nestled in the Cotswolds, Bibury looks straight out of a painting. It has everything you’re looking for in a trip to England — rows of ancient cottages, a picturesque old church, and the Coln, a river that leads straight to Bibury’s main street. It’s so bloody perfect, we can’t get enough of it. 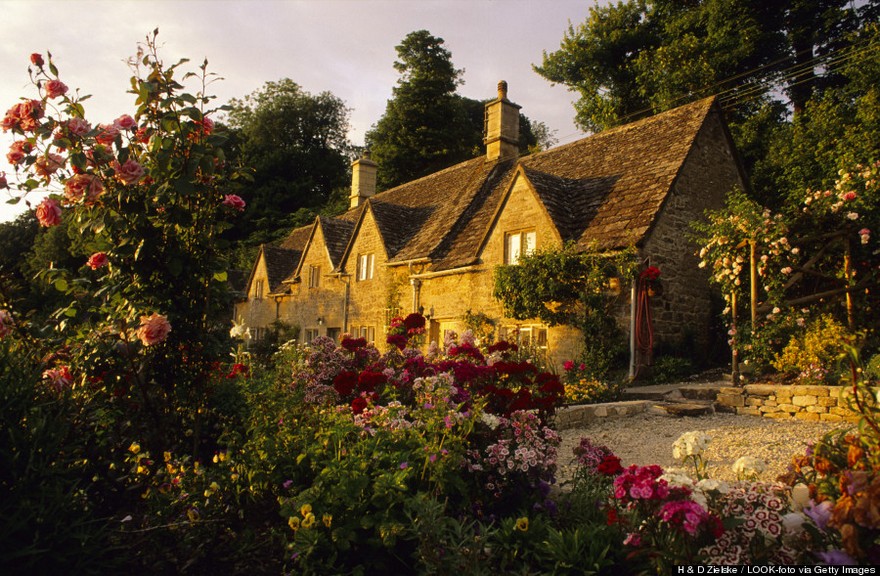 It’s hard to pick a place more beautiful than the others at Bibury, but Arlington Row, a cluster of ancient cottages that have been around since the 1300s, is a pretty easy choice. With the Row’s stone slate roofs and old-world charm, these wee little shelters basically belong on a postcard. 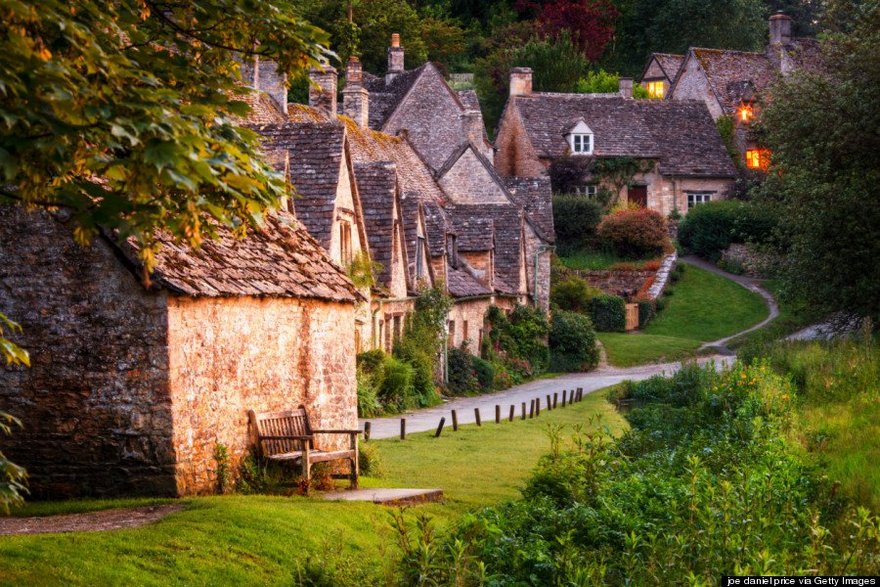 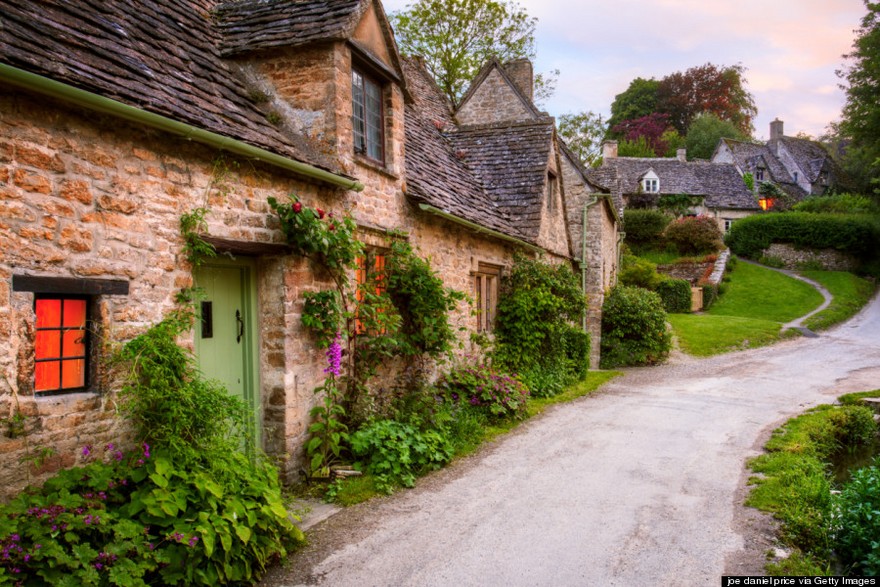 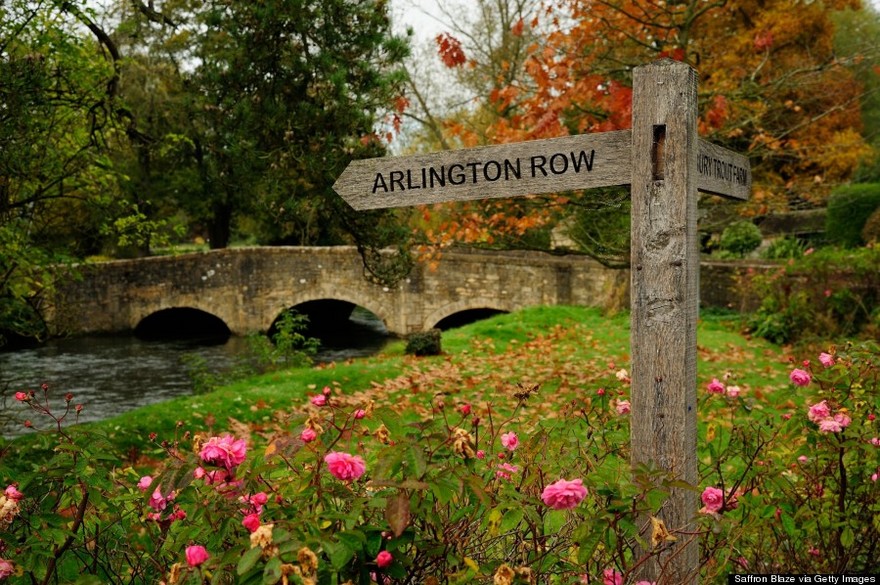 Bibury’s famous trout farm is also surprising lovely — you can catch your own dinner, and it’s connected to a cafe. It’s safe to say fish is always on the menu. 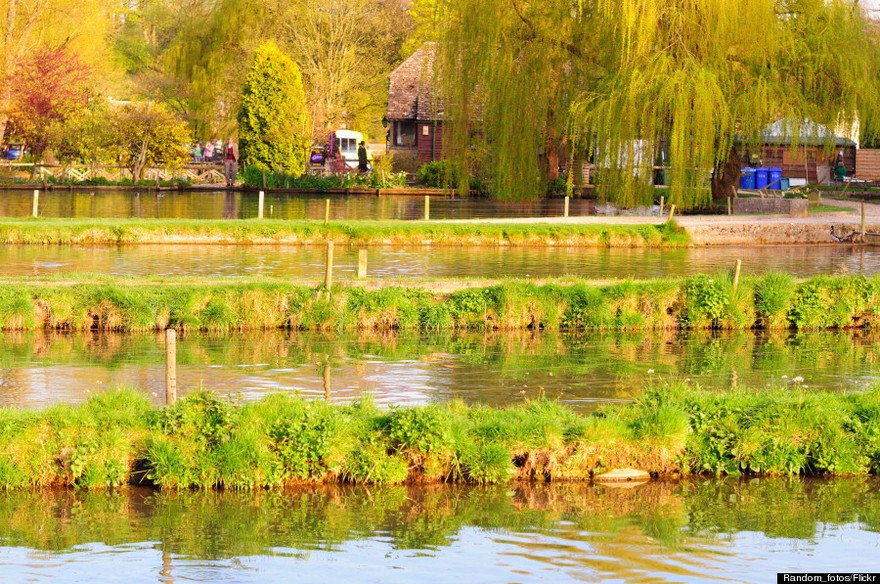 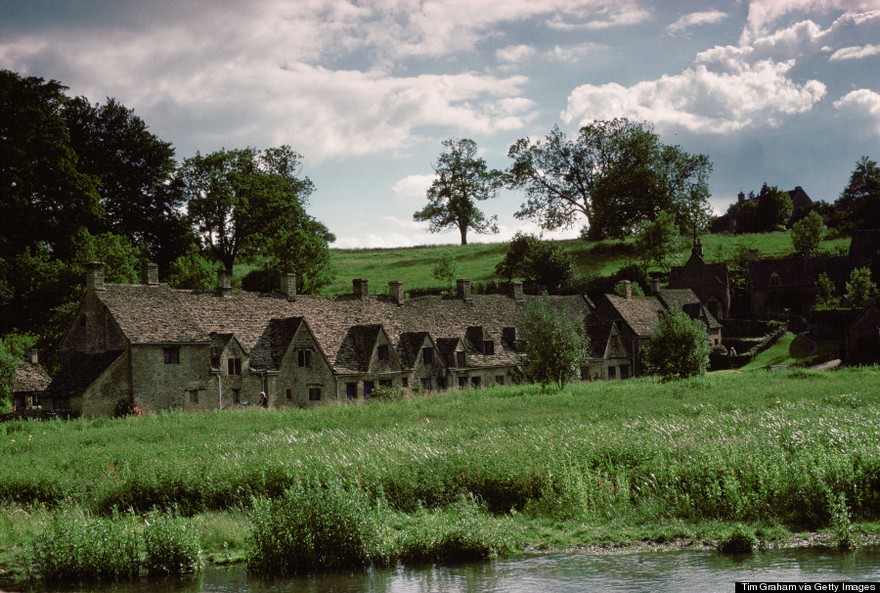 While in Bibury, make sure to stop by St. Mary’s Church for its beautiful stained glass windows. 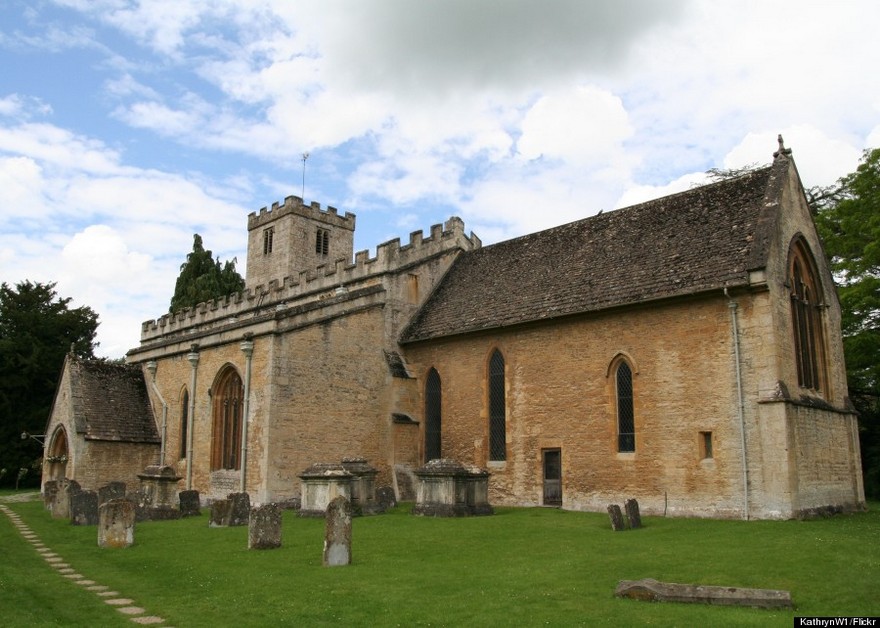 Stop by The Swan Hotel to enjoy a meal in a gorgeous, seventeenth-century inn. 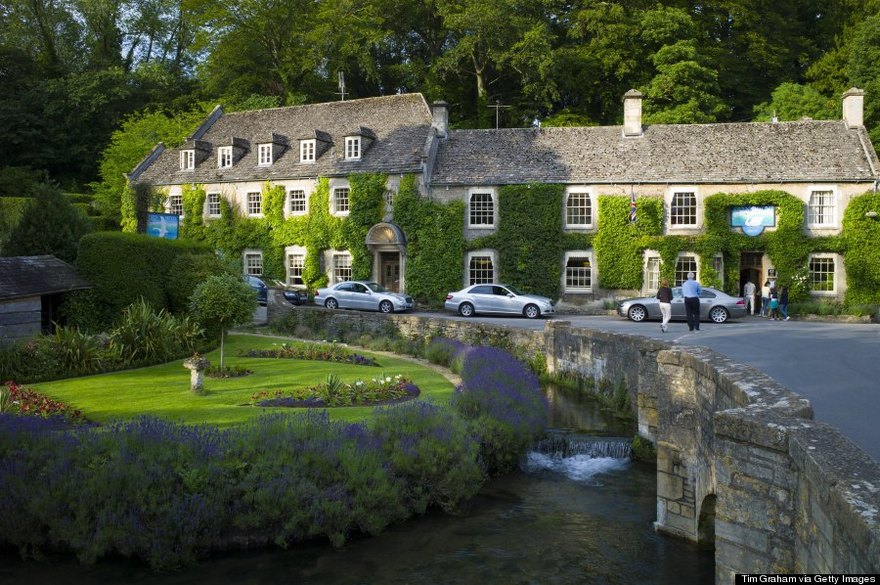 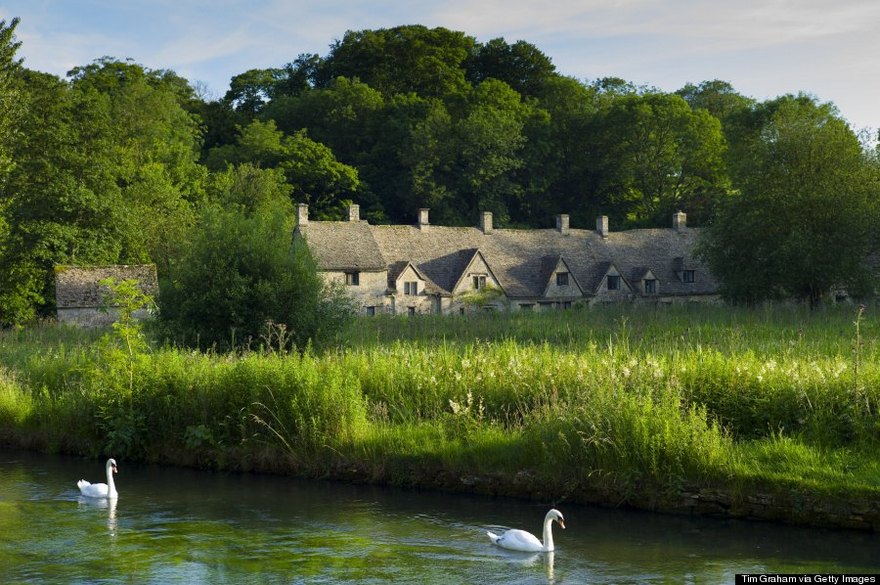 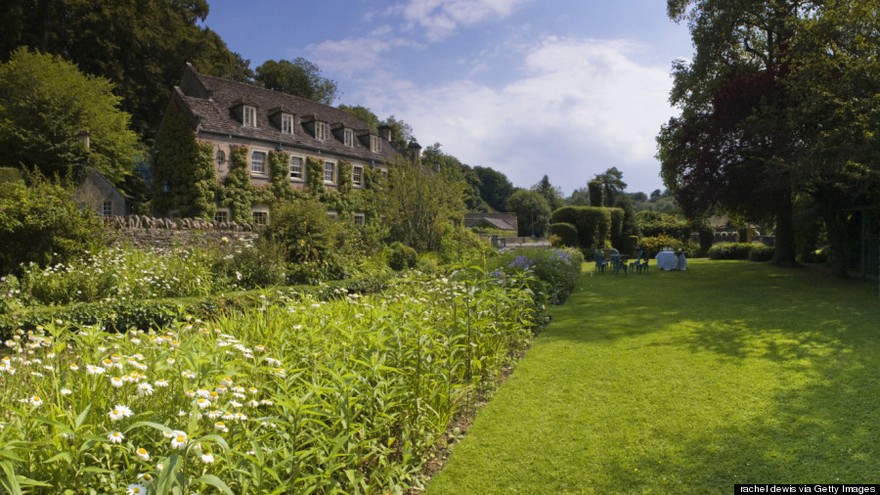 Bibury is not only a popular spot for tourists, it’s also a popular setting for films. As if we weren’t already obsessed with this town, “Bridget Jones’s Diary” was filmed here. 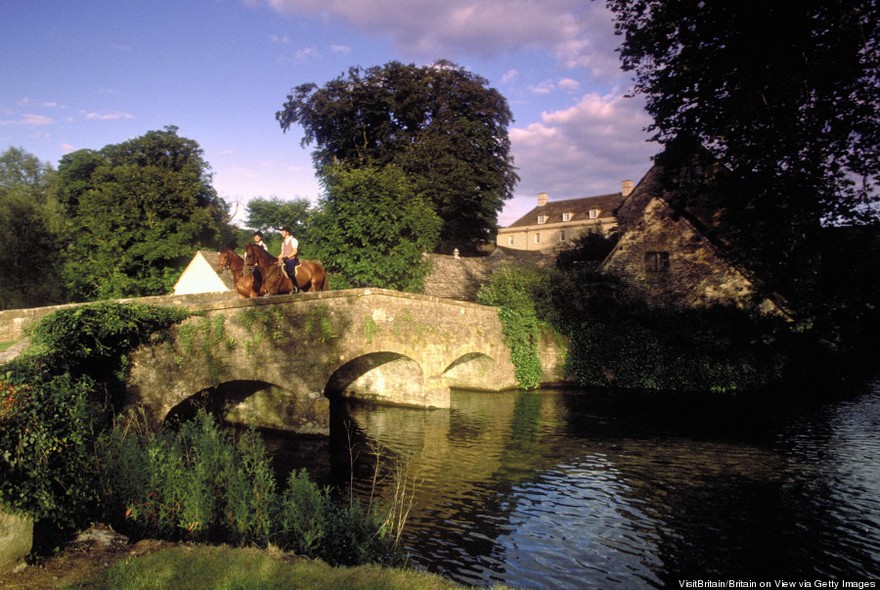 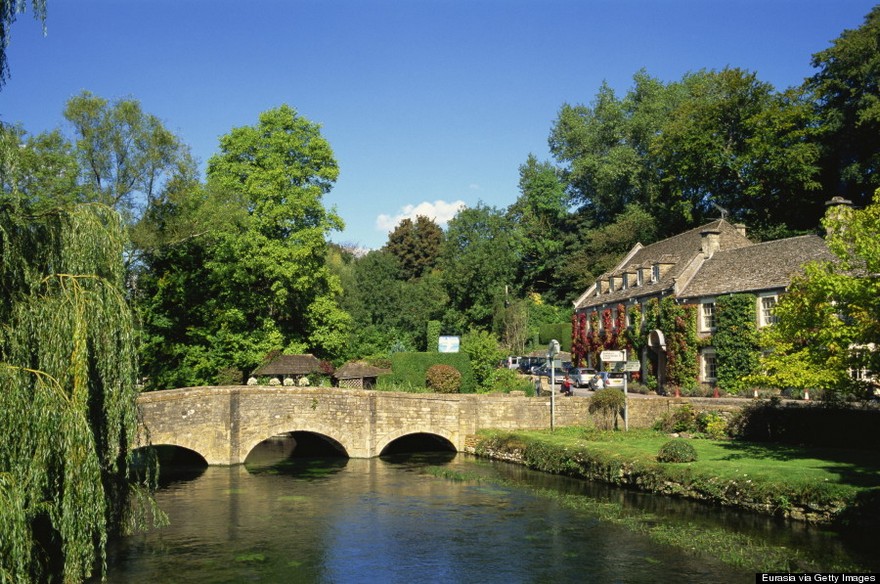 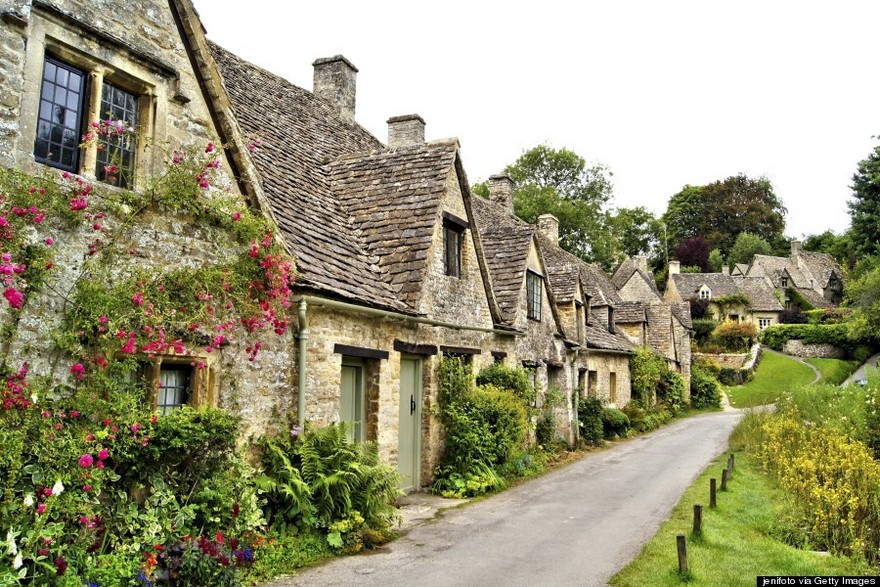 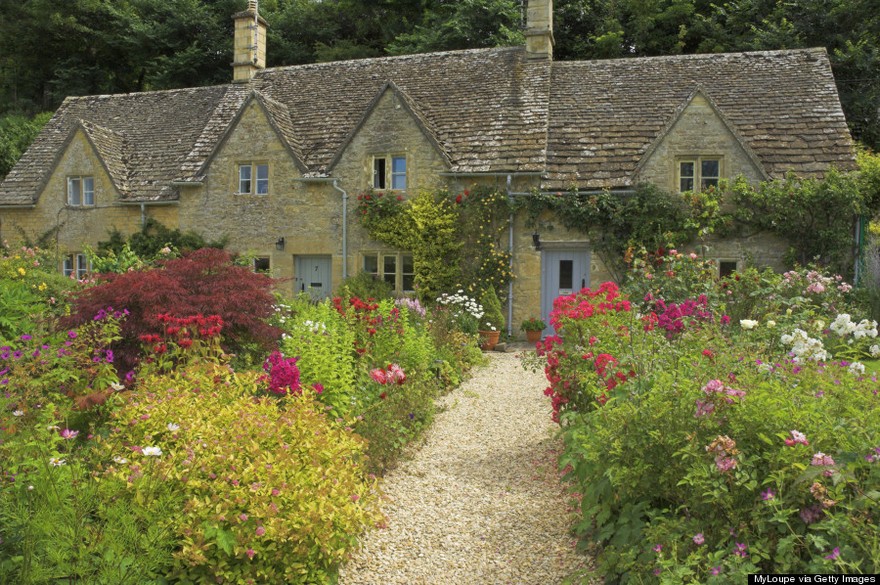 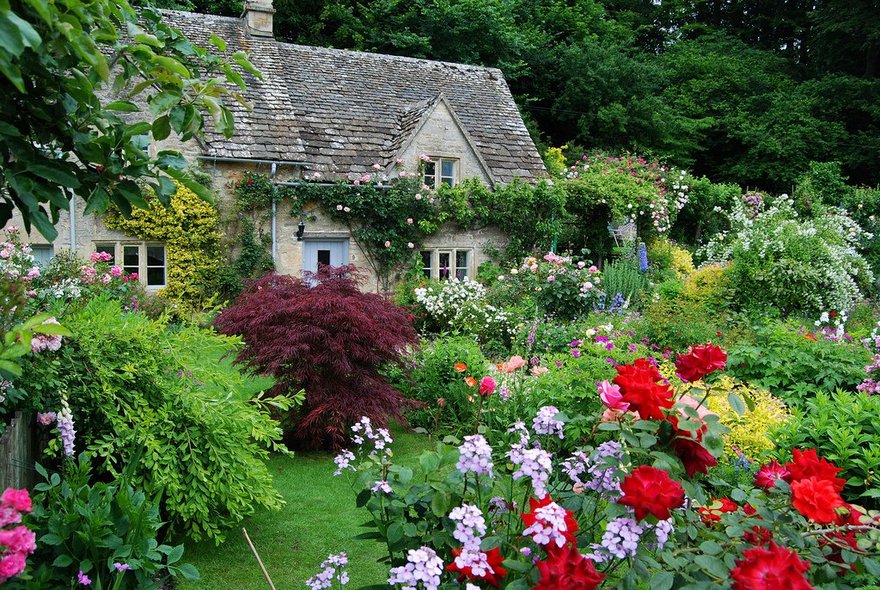 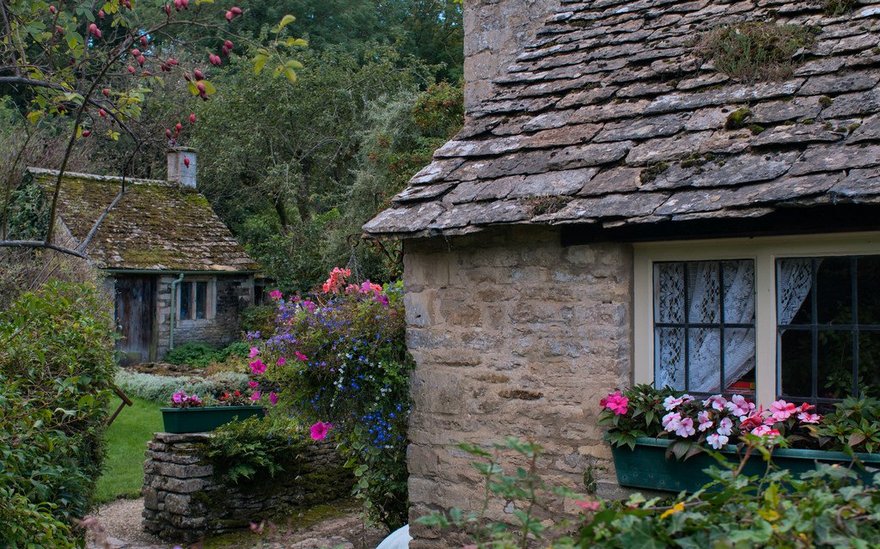 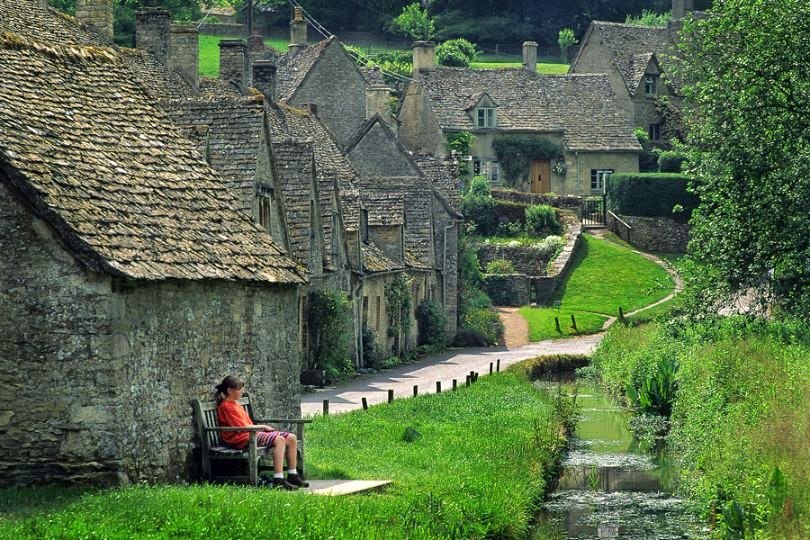 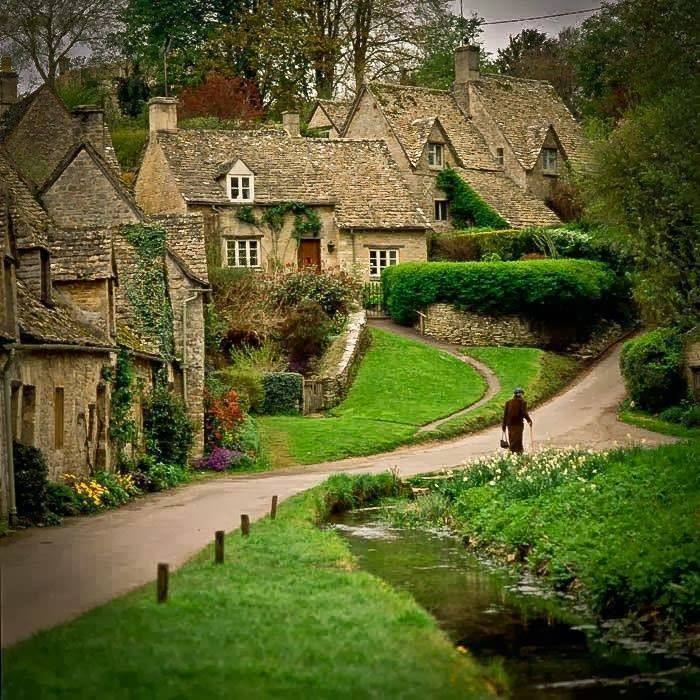 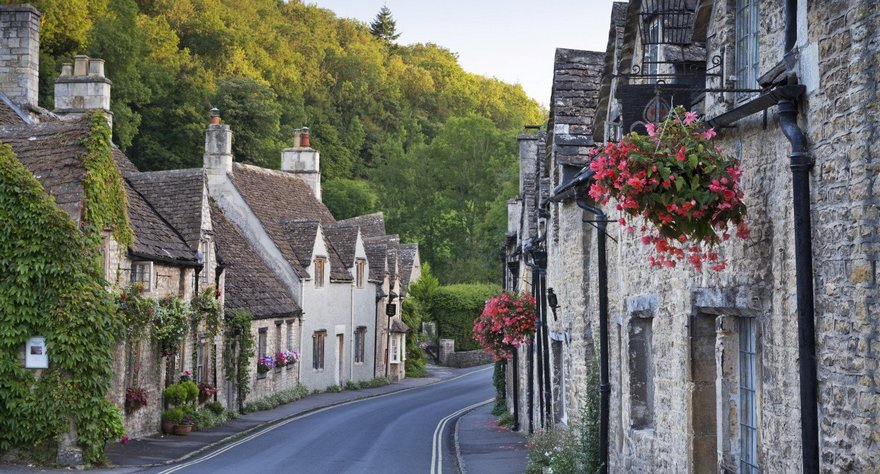 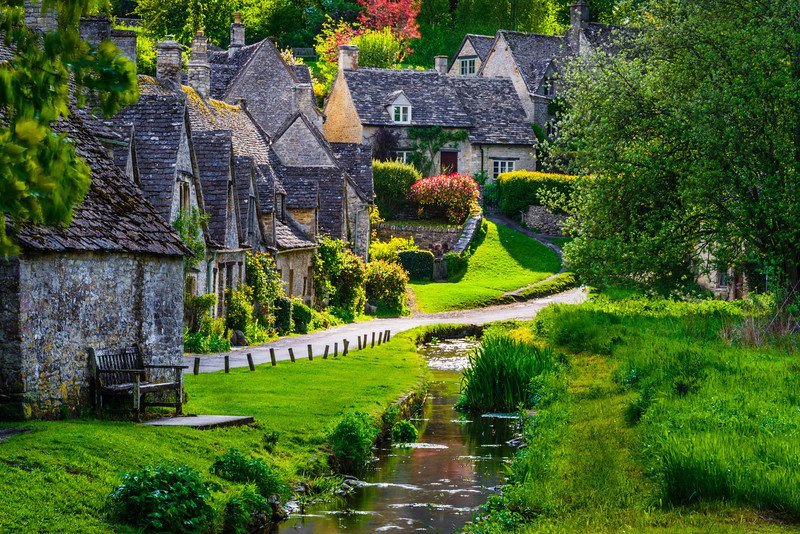 Bibury is situated in the Gloucestershire Cotswolds on the River Coln 9 miles from the market town of Burford.

The village was once described by William Morris as ‘the most beautiful village in the Cotswolds’.

The village centre clusters around a square near St. Mary’s, a Saxon church. Some of the Saxon remains inside the church are replicas as the originals are housed in the British Museum.

One of the village’s main tourist spots and overlooking a water meadow and the river is Arlington Row, a group of ancient cottages with steeply pitched roofs dating back to the 16th Century.

Henry Ford thought Arlington Row was an icon of England. On a trip to the Cotswolds he tried to buy the entire row of houses to ship back to Michigan so that he could include them in Greenfield Village.

Bibury has provided the backdrop for blockbuster films including Stardust and Bridget Jones’s Diary. 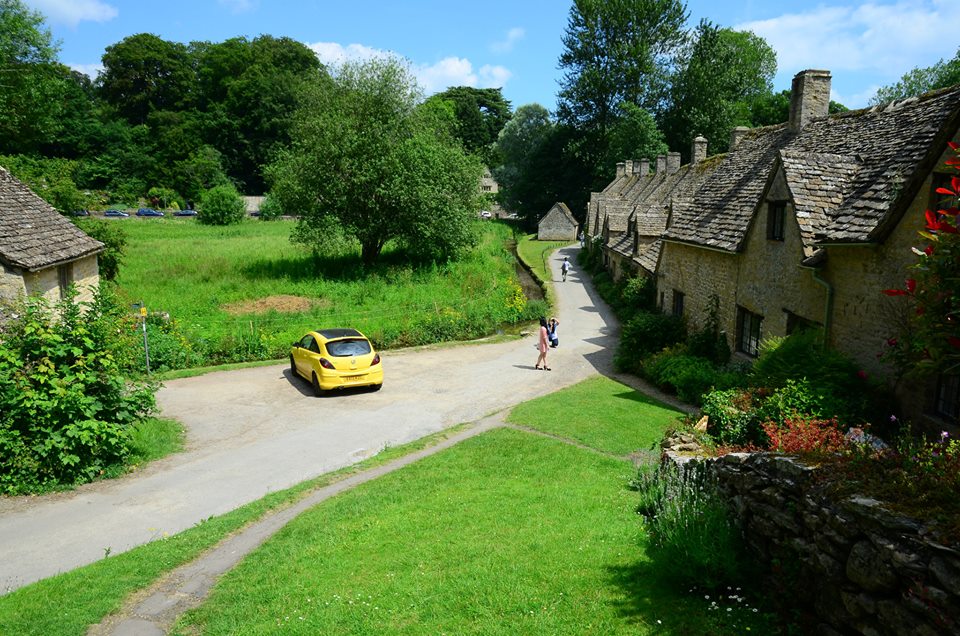 How to get to Bibury by Car

Travelling West along the M4, exit at junction 15 and travel towards Cirencester (A419), then take the B4425 to Bibury.

Travelling East along the M4, exit at junction 17 then travel towards Malmesbury and Cirencester (A429). Once in Cirencester take the B4425 to Bibury.

From the North take exit 11A and travel towards Cirencester. Once in Cirencester take the B4425 to Bibury.

From the South take exit 11A and travel towards Cirencester. Once in Cirencester take the B4425 to Bibury.

Parking: Where to park in Bibury 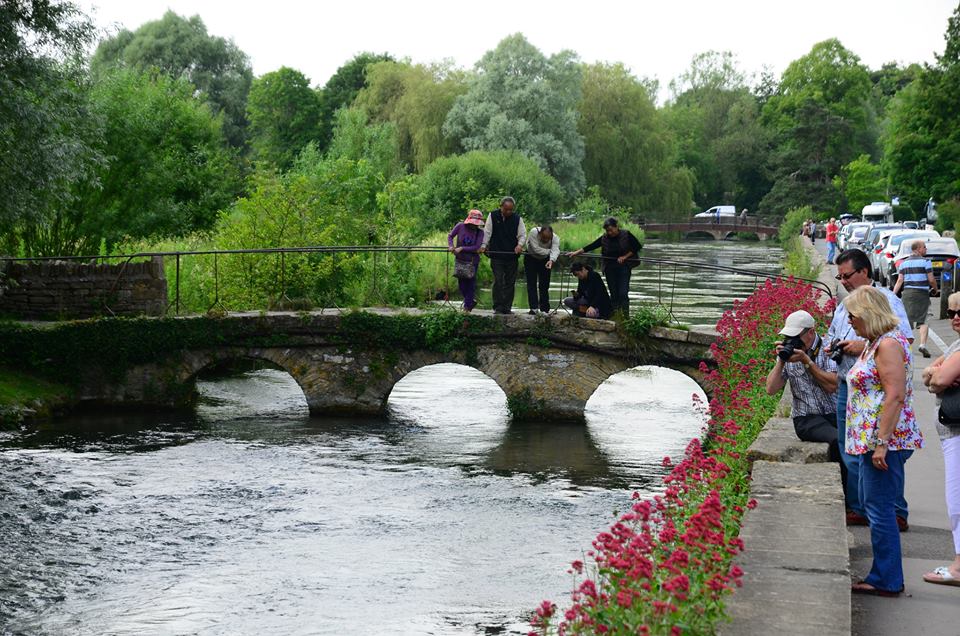 How to get to Bibury by train

The nearest railway station to Bibury is Kemble, a few miles from Cirencester and around 14 miles from Bibury.

Once at Kemble train station you can get a taxi to Bibury which will cost around £25. 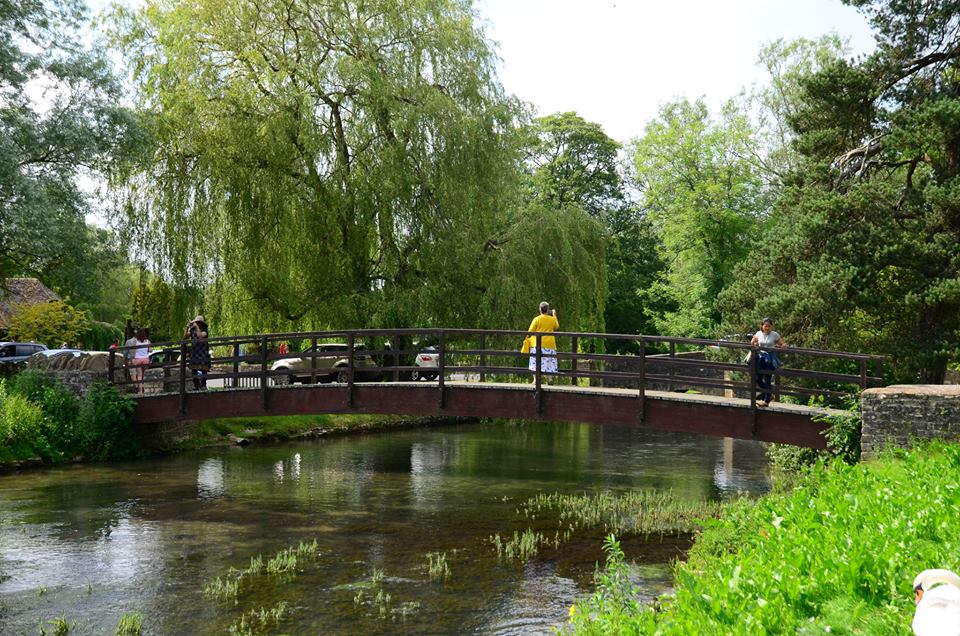 Hoe to get to Bibury by Bus

Given the large number of possible starting points, it’s difficult to give exhaustive information on how to get to Bibury by bus.

If you are arriving in the area by train (Kemble train station) then you may be visiting Cirencester before travelling on the Bibury. There’s a regular bus service from Cirencester.

If you are travelling by bus to Cirencester from London then you will probably be dropped off on London Road in Cirencester. You can then walk to the Market Place and catch a bus to Bibury from there. 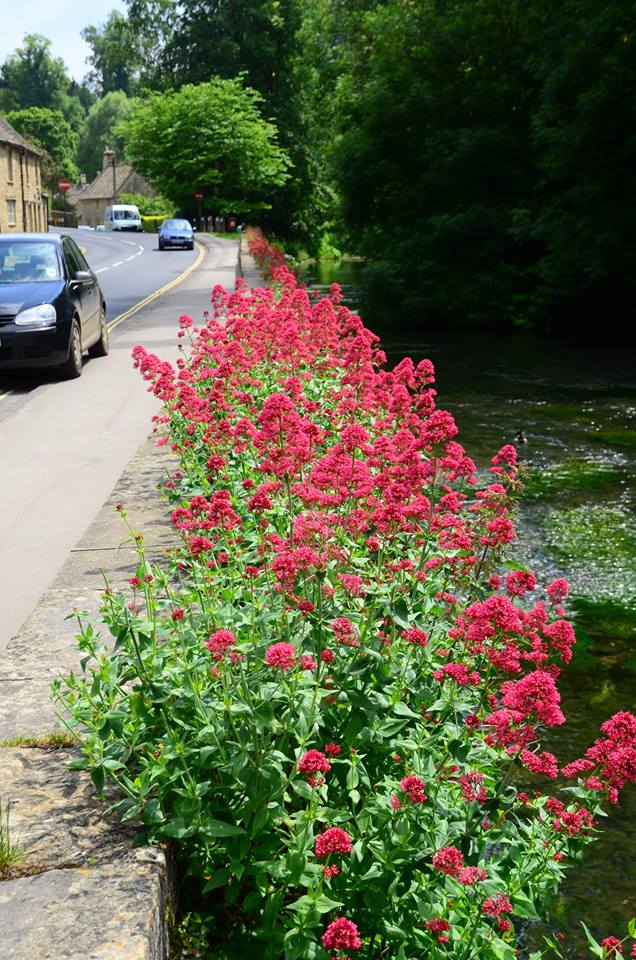 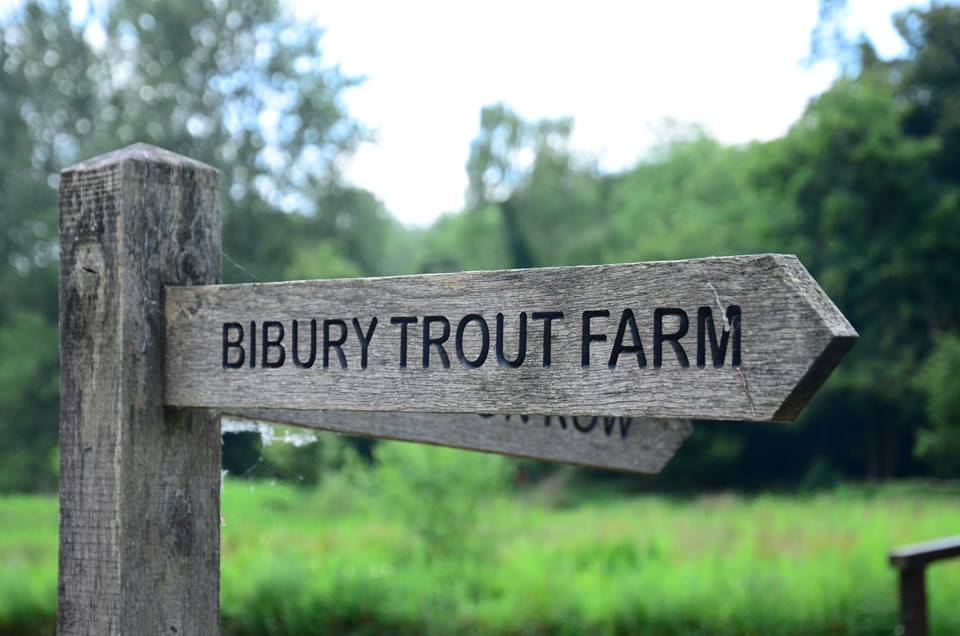 Bibury Trout Farm and restaurant where you can catch your own trout. The restaurant serves fresh trout meals.

Strolling alongside the river watching the trout in their live habitat and visiting Arlington Row.

Don’t miss a visit to the beautiful gardens at Barnsley House at Barnsley 3.3 miles away.

The Church of St Mary

The Church of St Mary the Virgin is located to one side of the village on higher ground than the river and the bridge. Here we have a church of Saxon origin, probably founded in the mid 8th century, though the surviving earliest feature may owe more to the 11th century.

There is much to see, from the Saxon and Norman carvings, to medieval windows and stained glass, and the striking chancel arch with evidence of Saxon, Norman, and Early English work. St Mary’s is a delightful church, and well worth a visit.

A peculiar tale attaches to a section of the churchyard, which has been known for centuries as ‘The Bisley Piece’. Bisley is a village about 17 miles to the west of Bibury, near Stroud. The inhabitants seemed to make a habit of running foul of church law. In the 13th and 15th centuries Bisley was placed under interdict by the pope.

One consequence of the interdict was that the people of Bisley were not allowed to bury their dead anywhere within the Diocese of Worcester for the duration of the penaly. The closest place outside the diocese which would accept Bisley burials was at Bibury.

Away from the sightseeing crowds in Bibury, a delightful walk through woodland and meadow rich in wildlife, across a Roman road and past a hidden dewpond. 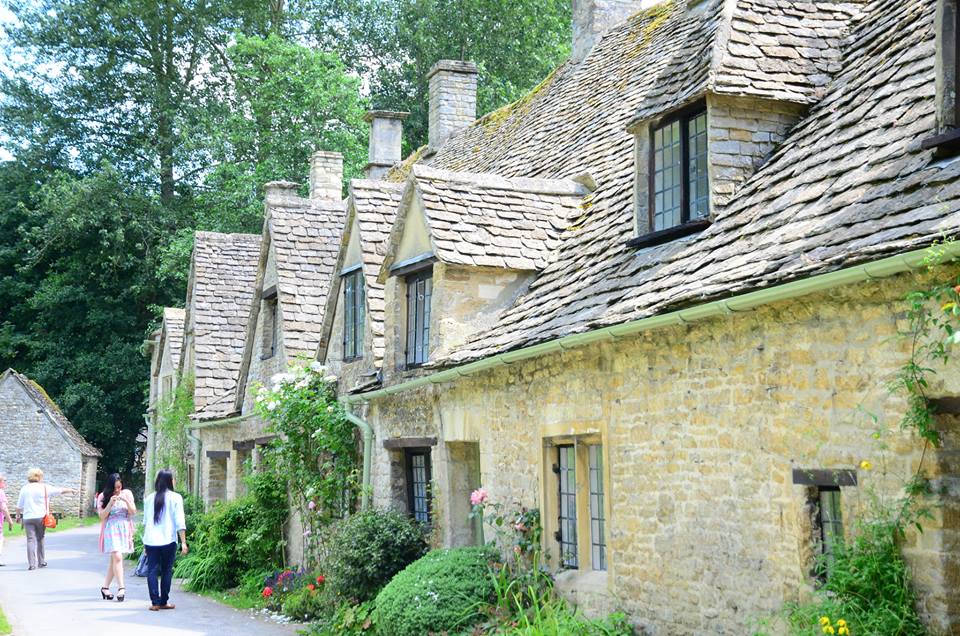 Accommodation: You can find, check rates, reviews & availability for Bibury hotels on Booking.com.

Where to go in Budapest — 9 top, must see & best places to visit in Budapest

Zakopane blog — The ultimate Zakopane travel guide: How to get & what to do in Zakopane Poland

Gdansk travel guide — The ultimate Gdansk guide: Best things & what to do in Gdansk