One of the most exciting attractions of Oita Prefecture, the Hells of Beppu (Jigoku Meguri) attract visitors from all over Japan. But beware, these onsen aren’t your regular run-of-the-mill hot springs as their temperatures are too high for anyone to soak in safely.

The Japanese island of Kyushu is a hotbed of geothermal activity, thanks to the country’s most active volcano Mt Aso, that the island is home to. The most famous of these natural hot springs are located near Beppu, a small city tucked between a bay of the Inland Sea and two dormant volcanoes on the east shore of the island. Beppu has more than 2,900 hot spring vents that discharges more than 130,000 tons of hot water from the ground every day, second only to that of the Yellowstone National Park in the United States. Vapors rising up from these vents make it seem as if the entire city is on fire. 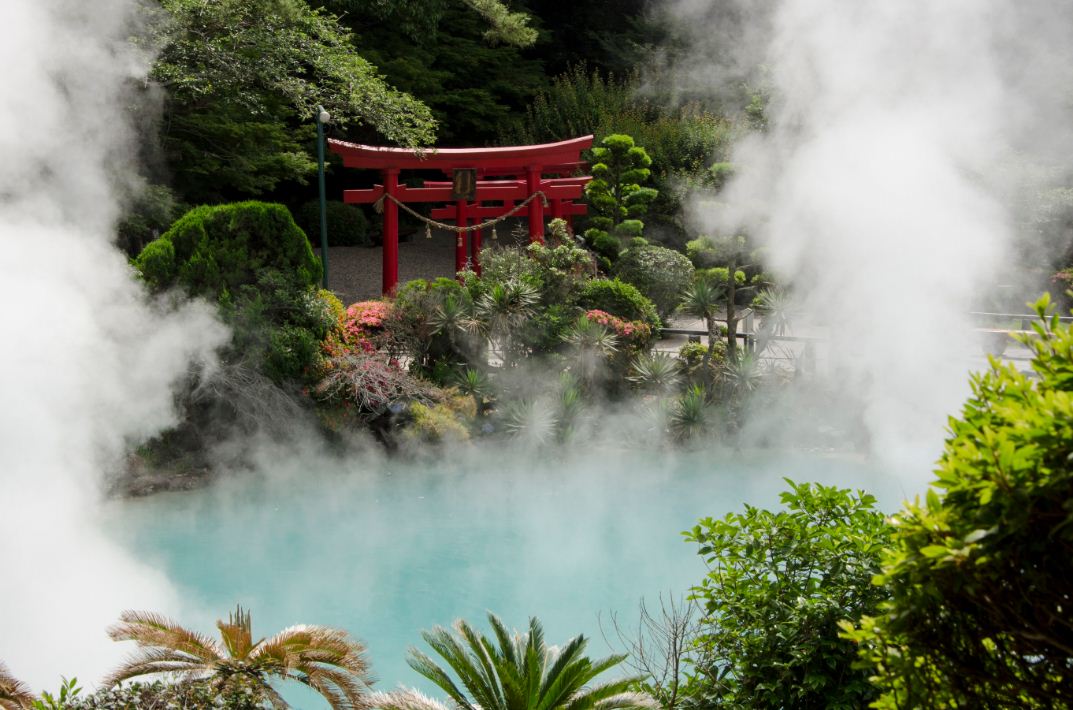 Of particular interest are the “Jigokus” or “Hells” —the city’s famed steaming hot springs. Beppu has eight famous jigokus, and they are indeed, hell on earth. These hot springs have temperatures that ranges from 50 to 99.5 °Celsius. Needless to say, the jigokus are not suitable for bathing, but they the most popular attraction in the city.

There are eight hells (“jigoku”) scattered around the Kannawa and Shibaseki districts of Beppu City, most of which are within walking distance of each other.

Aside from tourism, the numerous hot springs of Beppu play an important part in the daily lives of the city’s residents. Steam from wells is used to heat water which is delivered by pipes to homes and businesses. Some of it goes into homes and restaurants for cooking. The water is also used for agricultural research, physical therapy and recreational bathing. Of course, Beppu is the largest hot spring resort in the world.

The most spectacular of Beppu’s hot springs is the vermillion-colored Chinoike Jigoku or “blood pond hell”. The color comes from the presence of iron oxide and magnesium oxide. 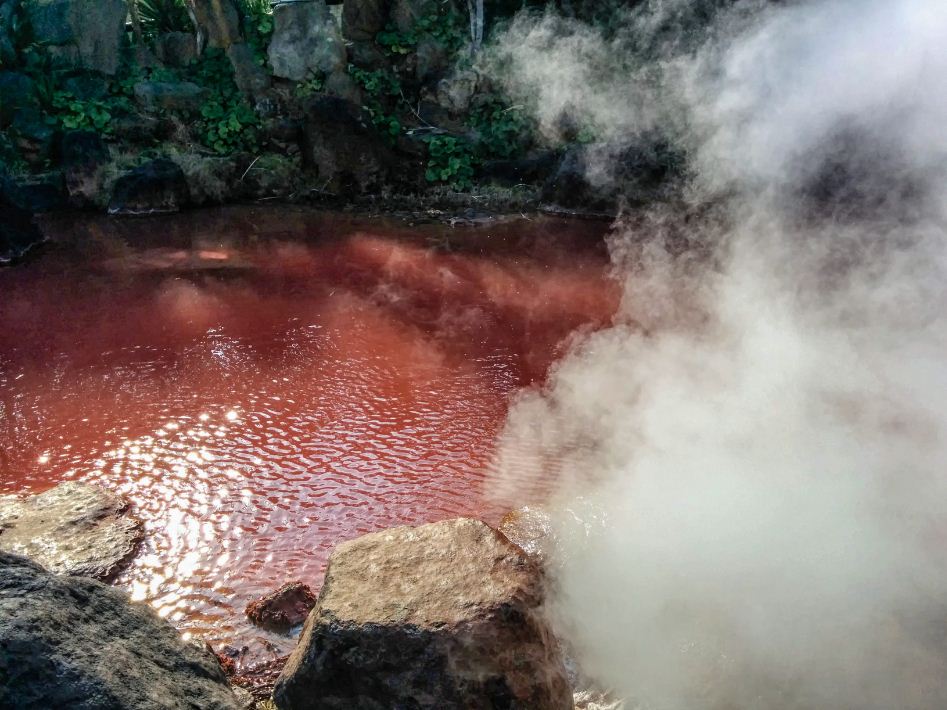 Umi Jigoku or “sea hell” is so called because it features bright cobalt blue water that looks as cool as the sea. But don’t be fooled, the water here is scalding hot at 98 degrees. In its spacious gardens, there are a few secondary, orange colored hot springs and a large, clear water pond with lotus flowers whose large leaves are strong enough to carry small children. Stores near Umi Jigoku sells pudding and boiled eggs cooked in the hot spring. 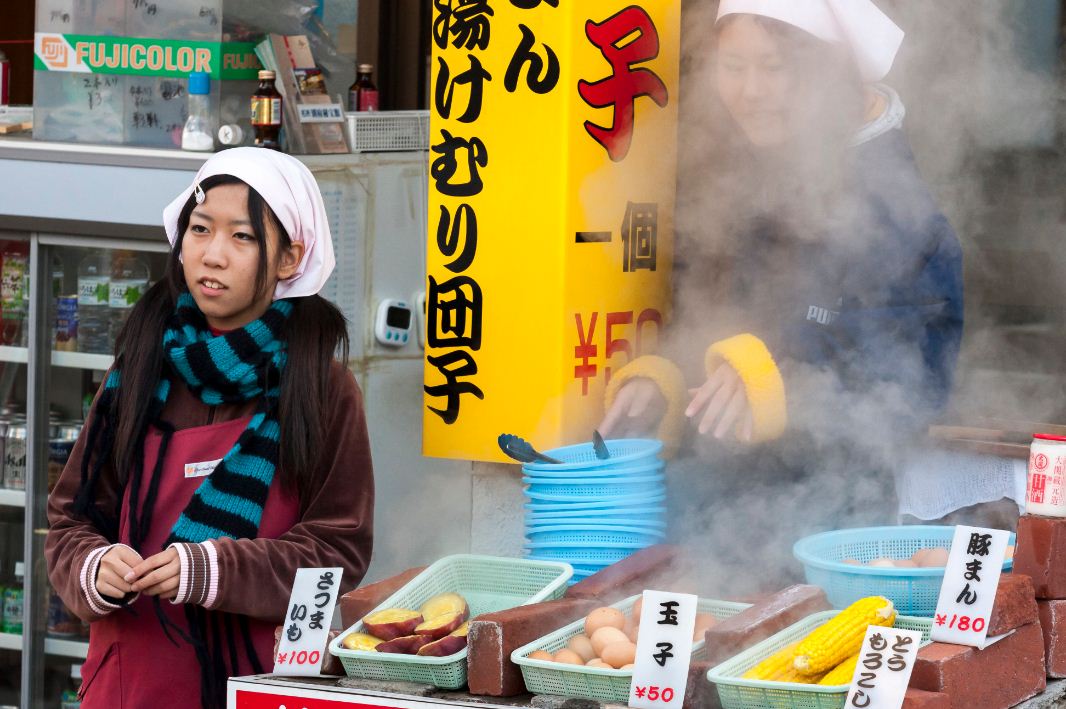 The “Shaven Monk’s Head Hell” is named after the mud bubbles which is said to look like the shaven heads of monks. Adjacent to the hell is a public bath with multiple pools. 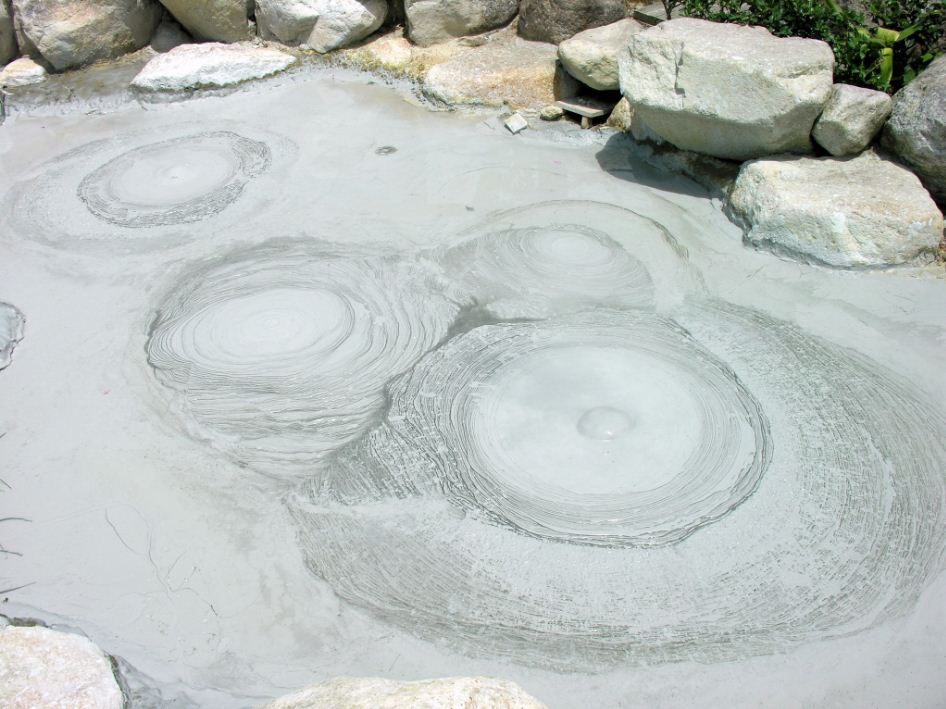 The “White Pond Hell” features a pond of hot, milky water. The color results from a mixture of boric acid, salt, sodium silicate and calcium bicarbonate. The pond is surrounded by a nice garden and a small, run-down aquarium where piranhas are kept.

The “Cooking Pot Hell” features several boiling ponds with a red demon statue guarding the entrance. On the grounds, visitors can drink the hot spring water, enjoy hand and foot baths, and try various snacks cooked or steamed by the hot spring.

The “Demon Mountain Hell”, also known as “Crocodile Hell” is home to a large number of crocodiles that are bred and kept on the grounds.

The “Mountain Hell” features small ponds of steaming hot water. There is a mini zoo nearby with large animals in small cages.

The “Geyser Hell” is a hot geyser which erupts every 30-40 minutes for about 6-10 minutes. Its spout can reach 50 meters, but a stone plate above the geyser prevent it to reaching its full height, probably to prevent it from spraying hot water all over the place and onto tourists.

It will cost you ¥550 to visit one hell or ¥2100 to visit all eight hells. If you have a good command of Japanese, Kamenoi also offers Japanese-language bus tours for 3600 yen in which you can conveniently cover all eight hells. Book your tours at the tourist information centre located in Beppu Station.

How to get to Beppu

How to get from Oita to Beppu

The nearest airport is in Oita, from which shuttle buses run to Beppu JR station making a number of stops in-between (40 minutes, ¥1500 as of August 2016). Exiting the airport, turn left for bus stands. Beppu bus leaves from stand #2 and signs are posted in English. Cash only. Each stop is announced in Japanese and in English.

The Fukuoka airport can be also used thanks to the bus service from the airport through the Oita Expressway coming to Kannawa onsen / Beppu downtown (¥2000 in case of 4-coupon ticket, 110 minutes).

How to get to beppu from Fukuoka

The Sonic limited express train runs twice an hour from Hakata Station in Fukuoka and Kokura Station in Kitakyushu, stopping at Beppu before terminating in Oita. From Hakata station to Beppu takes ~117 minutes.

The one way journey by Sonic limited express train between Fukuoka’s Hakata Station and Beppu takes two hours, costs around 5,500 yen and is fully covered by the Japan Rail Pass and Kyushu Rail Pass. A set of two tickets (2枚きっぷ, nimaikippu) for use by one or two persons in either direction within a one month period is available for only 6,180 yen, while a similar set of four tickets (4枚きっぷ, yonmaikippu) to be used within two months is available for only 11,000 yen.

An individual one-way ticket from Hakata Station costs ¥4290. Far better for the solo traveler planning a roundtrip is to buy nimai-kippu (discount two tickets) for ¥6,000 (Hakata <> Beppu), or ¥5,800 (Kokura <> Beppu). For pairs traveling, it’s even better to purchase yonmai-kippu (discount four tickets) for ¥10,000 (Hakata <> Beppu), or ¥9,800 (Kokura <> Beppu). A 3-day North Kyushu Railpass for temporary visitors to Japan costs ¥8,500, and the whole-Kyushi and whole-Japan passes are also valid.

If you are coming from Honshu on the San’yo Shinkansen line (such as those holding Japan Rail Passes), switch to the Sonic at Kokura station. From Kokura, you can reach Beppu in 75 minutes at the prices quoted above, or for free if you hold a rail pass.

How to get to Beppu from Tokyo

By train
Take the Tokaido/Sanyo Shinkansen from Tokyo to Kokura Station and transfer to the Sonic limited express train for Beppu. The entire one way trip takes about 6 hours and costs around 25,000 yen. Japan Rail Pass holders will require an additional hour, because they cannot use Nozomi trains along the Tokaido/Sanyo Shinkansen, and should instead travel by Hikari and Sakura trains with an additional transfer at Shin-Osaka Station.

By air
JAL, ANA, Solaseed and Jetstar Japan operate frequent flights between Tokyo (mostly Haneda Airport, except Jetstar which uses Narita Airport) and Oita Airport near Beppu. Flight duration is 90 minutes. The regular one way fare by JAL and ANA is about 40,000 yen, but discount tickets are usually available for around 11,500 to 27,000 yen. Fares by Solaseed Air are typically 20 percent lower than those by JAL and ANA, while Jetstar’s fares start around 5,000 yen.

The one way bus journey between Oita Airport and Beppu takes 40 minutes and costs 1500 yen. All buses stop at Beppu Kitahama, and a few buses also serve JR Beppu Station. Several rental car companies have an outlet at Oita Airport.

How to get to Beppu from Osaka

Kansai-kisen operates a service from Osaka direct to Beppu.

How to get to Beppu from Kyoto or Shikoku

You can take a ferry from Hiroshima or train directly.

For Hiroshima, just take the shinkansen from Okayama (Shikoku) or Kyoto.

For train, just take the shinkansen towards Hakata. Then take the super sonic to Beppu. You can transit at Hakata station. 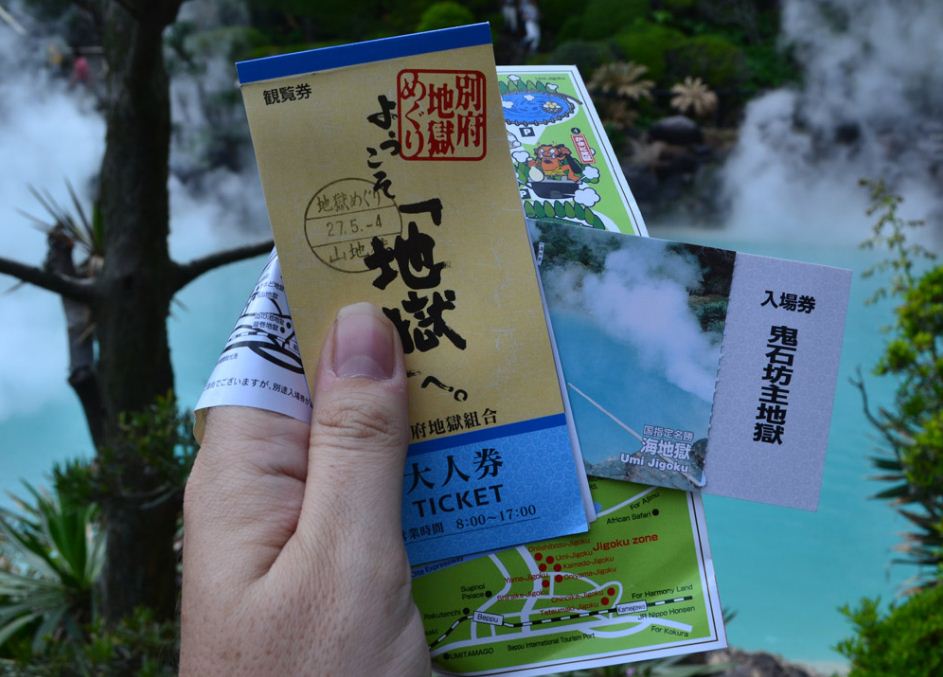 The town itself is walkable. However, the Hells may be a bit far from downtown, a some a bit far from each other, for many to choose this option. Additionally the walk would be along highways/roads, and thus not particularly scenic. Though, it is doable.

The Hells and other sites can be easily reached via the tourist-centered bus system. Departures are outside JR Beppu Station. The Foreign Tourist Information Office inside JR Beppu Station sells one-day bus passes for ¥900 (¥700 students), which is likely the best deal for most. The buses run in routes thus that no backtracking is necessary to visit all the of Hells.

The system is very much setup for visiting the hells, so it is no necessarily a must to plan one’s route in advance.

The tourism office (see below) can additionally provide the departure time and number of the next bus going to your destination (if it’s the Hells – the next bus will be leaving shortly), as well as maps detailing the route. On the Hells route itself, bus schedules are clearly posted at stops. The longest intervals are ~30 minutes. 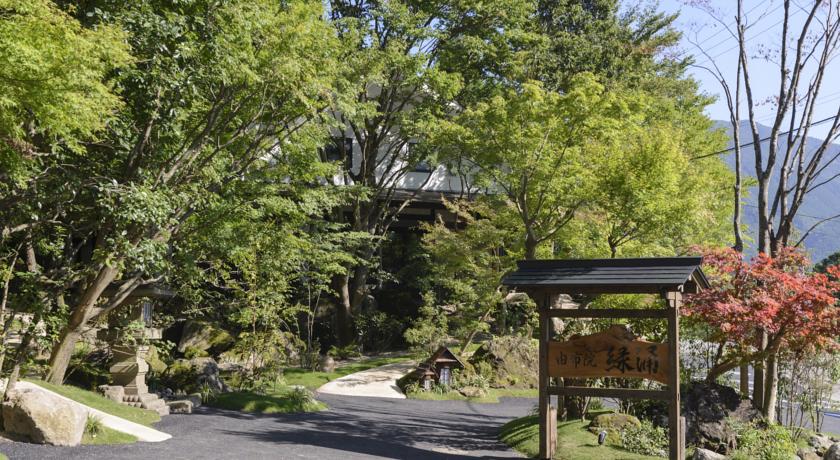 Yufuin Ryokuyu offers a comfortable setting while in Yufu. It also provides a safe, a 24-hour reception and luggage storage.There are 10 charming rooms at the ryokan, each offering all the necessities to ensure a comfortable stay.On-site dining options include a restaurant, which is an ideal place to enjoy a meal. The ryokan also serves breakfast each day.Attractions close to the ryokan include Yufuin Area and Yufuin Onsen. Suginoi Palace is also a brief car ride away.

You can check rates & availability for this hotel on Agoda.com or Booking.com. 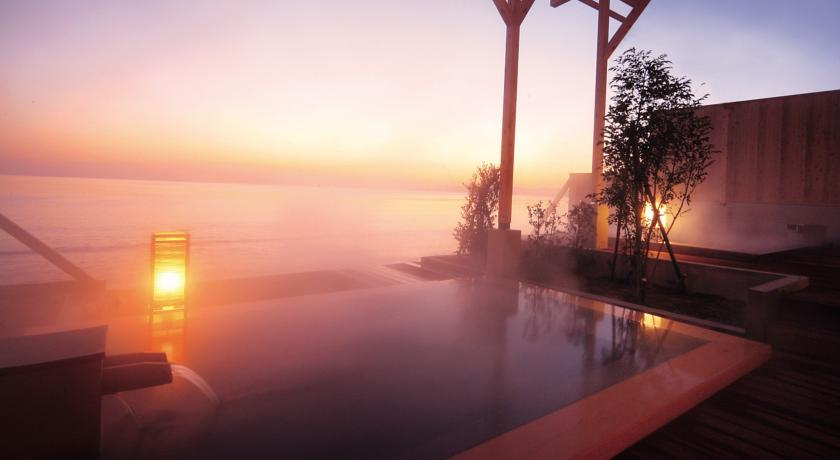 Boasting luxurious guest rooms with open-air hot spring bath overlooking the ocean, Shiosai-no-yado Seikai is a 7-minute walk from JR Beppu Daigaku Station. It features spacious public hot spring baths and a spa salon. Free Wi-Fi is provided in the public area, and parking is available at no charge. Fitted with dark wooden flooring and chic furnishings, each spacious room offers great ocean views. Guests can unwind on comfortable sofas or tatami (woven-straw) mats, and watch Blu-ray movies on a flat-screen TV. The Seikai provides large public baths and hot tubs on the ground floor and top floor. Spa Sheer Pearl offers ultimate relaxation with delicate massages and treatments. A gift shop and drink vending machines are available on site, and luggage can be stored at the 24-hour front desk for free. JR Beppu Station is a 15-minute drive and Oita Airport is a 40-minute drive from the property. Beppu Jigoku-meguri hot springs are within a 15-minute drive. Umitamago Aquarium is a 30-minute drive away. Gen serves traditional Japanese cuisine using seasonal and local ingredients. Eitaro restaurant offers various fresh seafood meals, while Japanese-Western fusion dishes can be enjoyed at Ban-ya. You can find, check rates & availability for this hotel on Agoda.com or Booking.com.