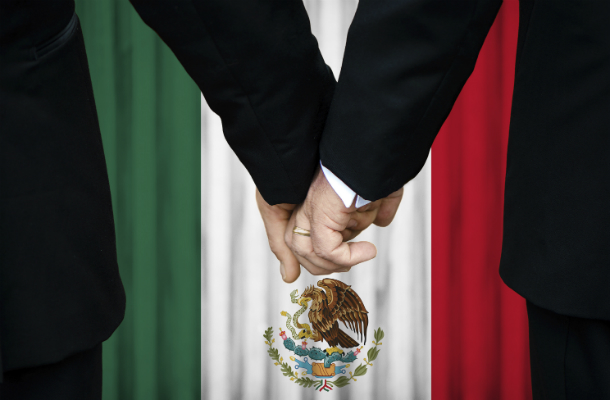 In most western metropolises, macho culture was ripe for satire as far back as the disco days of 1970s (think of the Village People, “Macho, ma- cho man, I want to be a macho man”) and most of us have moved on – apart from a few anti-same sex marriage recalcitrants! But in Mexico’s mestizo culture they’re still clinging to the Wild West ideal of the swaggering, virile male with his unbuttoned shirt revealing a hairy chest complete with swinging gold chains. So what does that mean for the LGBT visitor – is mexico “gay friendly”?

It’s key to remember that conservative macho culture fosters a sharp delineation between female and male roles. Latin women are expected to be submissive, dependent and dress for church. Female conquest is a feat performed first and foremost for other men (one must constantly prove one’s virility) and second to oneself (one must exhibit all signs of masculinity; fighting, drinking, gambling).

Given such behavior, it’s no surprise that most Mexicans (around 70%) have a hard time fathoming the notion of equal rights for gays and lesbians. Threats to traditional gender stereotypes (you won’t see many buffed, waxed metrosexuals) are viewed with suspicion.

What? Yes it’s true! In recent years Mexico has become increasingly broad-minded about sexuality. On 29 April 2003, the Federal Law to Prevent and Eliminate Discrimination was passed. Mexico hosted its first same sex wedding in 2010. While gays and lesbians don’t generally adopt a high profile (the U.S. State Department cautions GBLT travelers to use discretion when revealing their sexuality), they rarely attract open discrimination or violence.

The legalization of gay marriage in Mexico City has reinvigorated GBLT culture in the capital. Zona Rosa is Mexico City’s gay neighborhood.

The area was reputedly named the “Pink Zone” by Mexican artist José Luis Cuevas in the 1970s, when he claimed the district was “too timid to be called red too frivolous to be white.” Now, a seen-it-all vibe prevails. You can shop for punk clothing, check out alternative ‘spas,’ take in a drag show and then dance until dawn beneath a spinning disco ball to the sound of Earth, Wind and Fire.

Be aware that in Mexico City’s gay district the prettiest street-girls are boys and male prostitutes (the ‘good vibe guys’ or ‘chavos buena onda’) solicit heavily along stretches of Paseo de la Reforma, just on the periphery of Zona Rosa.

The commercialized coastal resorts of Cancún, Acapulco and Playa del Carmen are hardly socially conservative and are thus very popular with the GBLT community. Puerto Vallarta is Mexico’s gay capital. As well as hosting an annual gay parade, there are plenty of hotels, tours, cruises and venues (from sleek martini bars to gritty strip clubs and drag shows) which all aim to take a slice of the lucrative, upwardly mobile gay market. In many bars, you’ll come across Purple Hand, the only beer (produced by a small Mexican brewery called Minerva) marketed at the GBLT community.

The Third Gender: I’m a Muxe

Southeast from Oaxaca, the lowland Isthmus of Tehuantepac has a strong Zapotec culture in which alternative notions of sexuality are not only accepted, they’re celebrated. Once a matriarchal society, Zapotec women are hard-core saleswomen that also like to take the lead in all manner of village affairs.

Then there are the muxe (pronounced ‘moo-she’), a ‘third gender‘ that takes both male and female characteristics and are neither devalued nor discriminated against in their communities. Muxes are not transgender, they are distinct. Vestidas are muxes who dress as women and apply makeup, but there are also pintadas, the less common muxes who wear men’s clothing.

Occasionally muxes will take on more ‘manly’ career tracks; one notable muxe, Amaranta Gómez Regalado, ran for Mexico’s congress in 2003. Muxes also serve as a sexual outlet for men before marriage, often dating men who go on to marry women (who will visit the muxe to learn some tips about their new spouse). A surprisingly pleasing outcome for many families is to have a gay son (not all muxes are gay) who can bolster the family’s finances thanks to their skills at producing and selling handicrafts. When the daughter gets married and leaves homes (usually at a very young age) the gay son generally assumes the role of caregiver to aging parents.