One New York City couple took the proverbial “nomadic lifestyle” to a new level. Here are their tips and tricks for how to do it yourself.

What’s it like to run a successful business while traveling half the year? Blanca Valbuena and Antonio Evans, who manage a social media marketing business and a team of fifteen people spread between Michigan, New Jersey, New York, Argentina, Colombia, and the Philippines, have the answers. Yes, really.

The most challenging part of being a nomadic entrepreneur, according to the couple, is the personal aspect, surprisingly enough. They said that maintaining friendships and dealing with the fact that family is not close by can be tough. Likewise, constantly being with your partner in life and in business, while in foreign territory, can be trying at times. They started with one-month trips and gradually increased their time away to six months at a time. That doesn’t mean that they stay in New York City the remaining six months: they leave again, but cap their trips at six months each time.

They had expected that keeping the team cohesive would be the biggest challenge, but it but turned out not to be a big deal. “They travel as well since we have no ‘real’ office. But there are some awesome tools out there that help us communicate and keep everyone on the same page,” Valbuena said.

Their business, SocialDraft, is a social media marketing and monitoring firm. They do pretty much everything online: they pitch via Skype, conduct sales calls on Facebook, and run every aspect of the business from their laptops and smart phones. “On a side note, we even met online,” said Evans.

To accommodate team members and clients, the couple adjusts their schedule to fit that of the business. They work normal U.S. hours no matter where they are, so when in Asia, they work night hours and in Europe, they work afternoons. The number of online tools and services available to handle client support at all times is helping dramatically.

How to Choose Your Itineraries

Last year, they left in April and built their own Game of Thrones-inspired itinerary through Croatia to only come back in September. They veered off to Strasbourg, France, as Valbuena has what she calls “a severe France obsession,” fueled by the fact that her grandfather was born there.

Barely back home in September, Valbuena and Evans were getting ready to leave again shortly. Destination: Colombia, where Valbuena was born. She says she has never been to Medellín, but they have been watching Narcos on Netflix, so they agreed to head there in November through December, then Cartagena in December through January, with a soft landing in Florida in January 2016 before returning home to New York City.

Gems Along The Way

So far, they have been to a total of 25 countries across North, Central, and South America, as well as Europe and Asia. Traveling regularly has other perks like knowing the well-kept secrets. According to Evans, the best part of their trip this year was when they stayed in Florence at an Airbnb owned by a Medici Princess. “Her riding partner smuggled us into the finals for an insane soccer game called the Calcio Storico Fiorentino. He literally hid us between his horse and another horse and we became part of the official parade.”

Advice For Traveling And Running a Business On The Go

Valbuena and Evans both agreed that their one piece of advice is to not believe the hype about entrepreneurs and start-ups doing 40-hour work weeks. “This is not true,” said Evans. “You need to be ready to give your business your all. Our team members are like family and the fates of their future lies on our shoulders.”

“If we are unsuccessful, it is not just Antonio and I who fail,” Valbuena chimed in. “It is them and their families that are at peril. We have lots of fun, but we work just as hard if not harder than others. We continuously travel, but there are no weekends or holidays. Habits help with this. I’ve got daily habits that I stick to religiously. This keeps me organized and focused. It allows me to check off the things that need to get done so nothing gets dropped.” 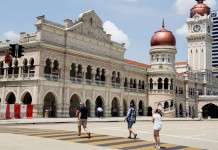 4 business etiquettes in asia you should kown