Penang – an ancient city with a rich culture and history, George Town, a UNESCO world cultural heritage. Visiting Penang to escape the stuffy, to find the idyllic, ancient. And I do not understand why Penang gives me the feeling like in Hoi An ancient town of Vietnam although it is a bit more bustling, more modern. But after all Penang still is a peaceful ancient city, no shadow of tall buildings, friendly people, hospitable.

Under Penang state, close to the Strait of Malacca, Penang is the only island city of Malaysia and the third most populous city in the country. Referring to the pearl island of Malaysia, which is dubbed the “The Pearl of the Orient”, people often know a land of past, present, and future. In the past, Penang was once a British concession and the old town of George Town still remains traces of old times that used to be an important trading port on the Asia – Europe maritime route.

At present, after many ups and downs, Penang has gained freedom and is one of Malaysia’s strong tourism and industrial developed cities. Today, when talking about Penang, people often think of pristine, sunny beaches; George Town – the city of heritages and wall painting art harmony with modernity, a street food paradise nowhere has. Lonely Planet magazine voted Penang on the list of top 10 best destinations in 2016. 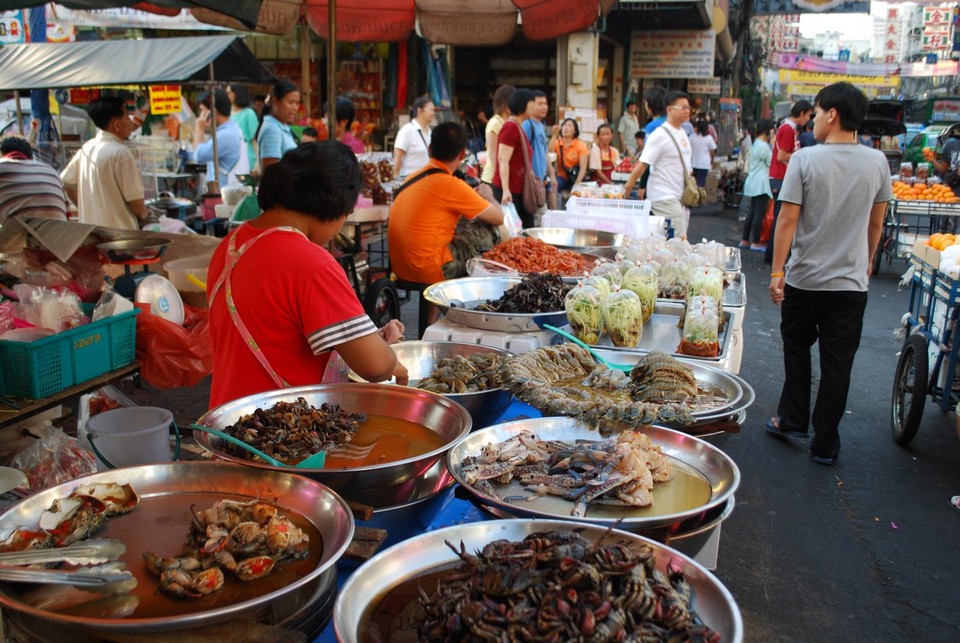 Located in the northeast of the island, Georgetown is the capital of Penang, a world heritage site recognized by UNESCO on July 7, 2008. The ancient of Georgetown with the interference of many cultures and beliefs is considered the heart of Penang. It also home to many works of art, religion buildings and history. Here, you will discover unique architecture from different cultures such as India, China, Malay and even Western culture. The influence of Chinese culture is most evident in ancient houses, Buddhist pagodas and temples. Present in Little India is an Indian culture. And many colonial architectures are also preserved and restored. So when coming to George Town, wandering on every street is a different experience that will make you admiring and surprised. 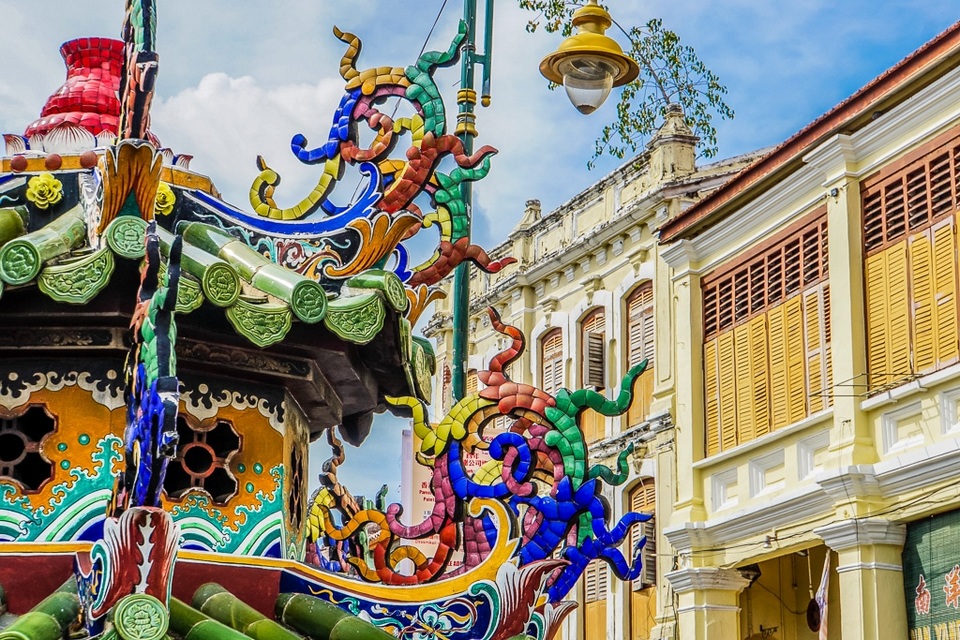 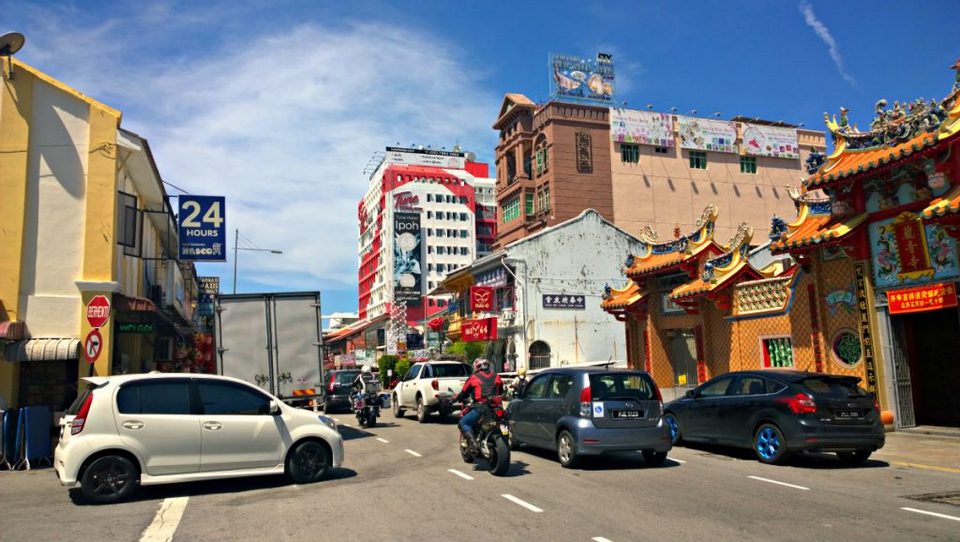 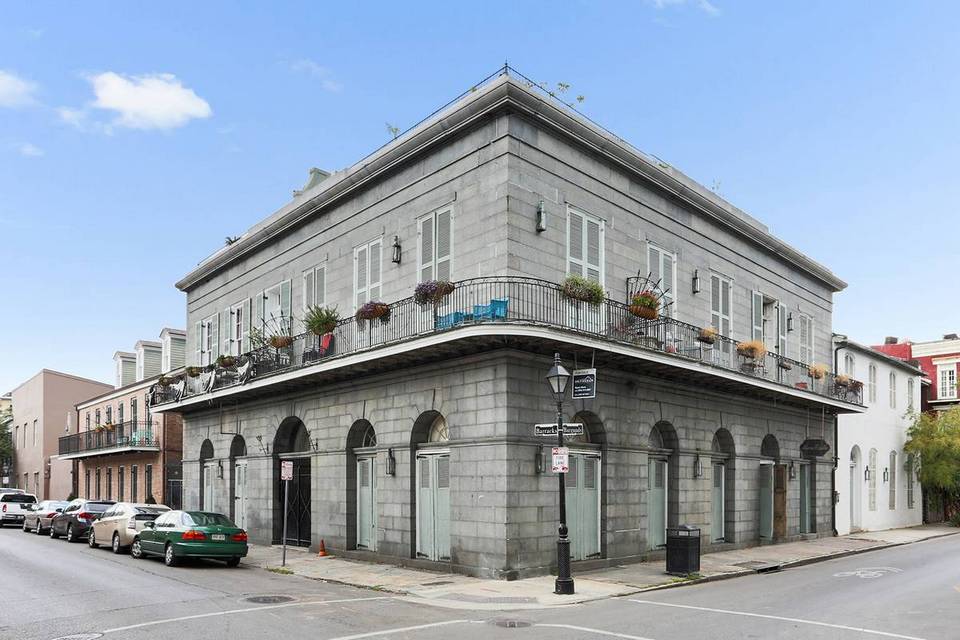 Referring to Georgetown, people will think of street art, 2D and 3D paintings on the walls. Since this Penang tourist destination is recognized as a world cultural heritage, the city has begun appear unique paintings. In 2012, Lithuanian painter Ernest Zacharevic blew a new wind onto appearance of the old town of Georgetown. He created 2D and 3D paintings combined with real objects, looking both funny and troll because sometimes you could not distinguish real and fake.

After that, there was a movement of other street artists and they paint throughout alleys and corners. Georgetown still retains its ancient look but adds lots of interesting, more lively and cool. Surely anyone who came here also wants to find the first paintings to check in.

Georgetown is a must visit place in Penang, but if you have not yet visited, you have not yet to come Penang. Here, there is a collection of artworks that cannot be found in any museum or gallery, but are displayed right on the walls of the city. 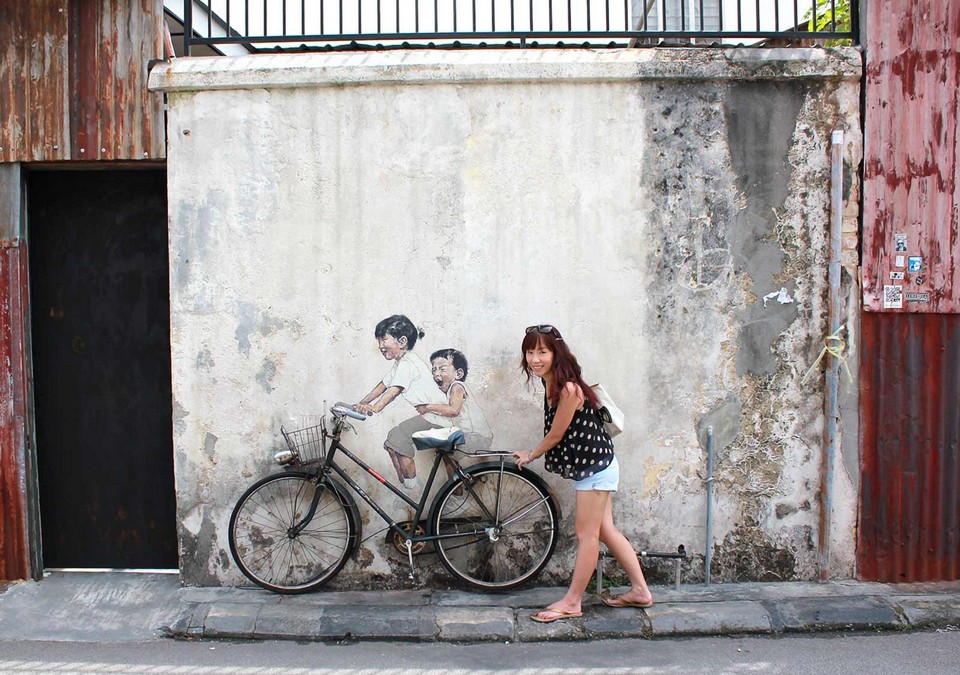 For the convenience of sightseeing, you should ask for maps/instructions if you don’t want to miss any drawings.

What to eat in Georgetown?

Georgetown is home to many ethnic Chinese living, the architecture here also brings a bit style of Chinese architecture. The clans in Georgetown have built many houses to settle, called kongsi.

Kongsi represents the clan’s success and wealth and is also a place for family gatherings and ancestor worship.

The Khoo clan is one of the largest clans in the Fujian community in Penang. Like other clans, Khoo built a great house called Khoo Kongsi. This house has so far been very stable, although it has been more than 650 years old. The building clearly shows the influence of Chinese culture that the Fujian people bring to Penang. Kongsi of the Khoo clan is one of the most visited houses. This is also one of the houses with the most spectacular design with gold carvings and stone statues.

If you visit Khoo Kongsi, you will admire stone carvings and sculptures, granite dragons, golden artworks and beautiful paper lights. For those who love history or architecture, Khoo Kongsi is a memorable stop in Penang. 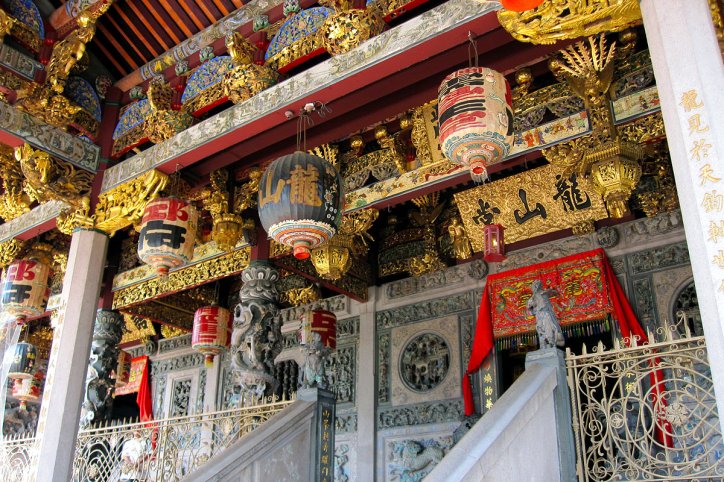 What to eat near Khoo Kongsi?

Cheong Fatt Tze Mansion is more famous for its name as the Blue Mansion, due to its striking indigo blue color. This tourist destination in Penang was built in the 1880s and named after a wealthy merchant. 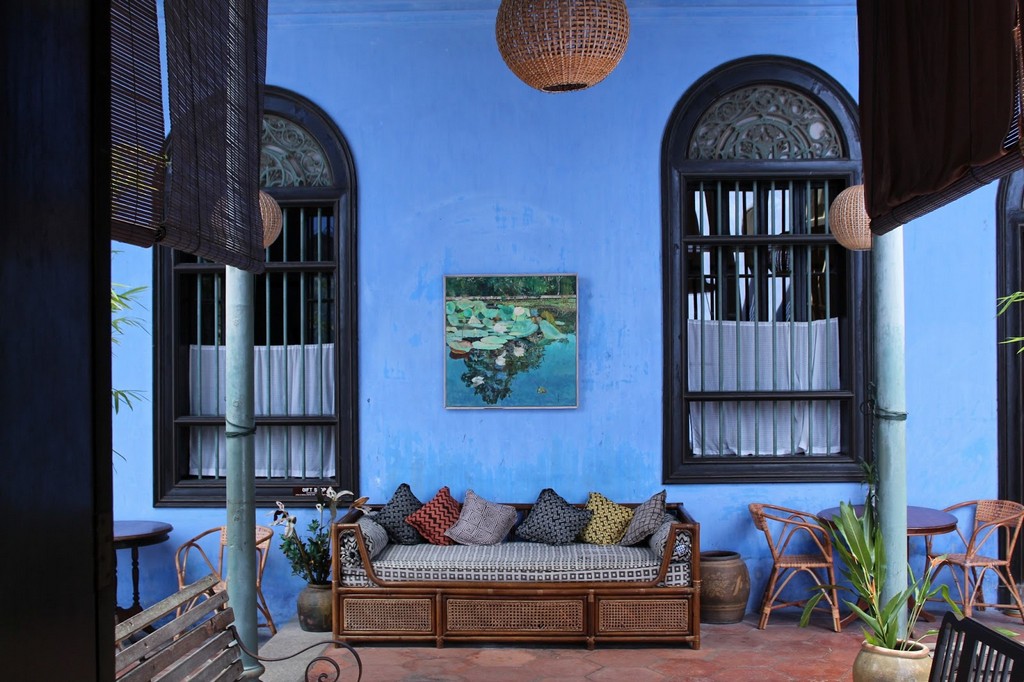 The Blue Mansion is carefully preserved from the 18th century, so it still retains the characteristics of Hakka – Teochew architecture. This is one of the few traditional Chinese mansions that still exists in foreign countries to today. 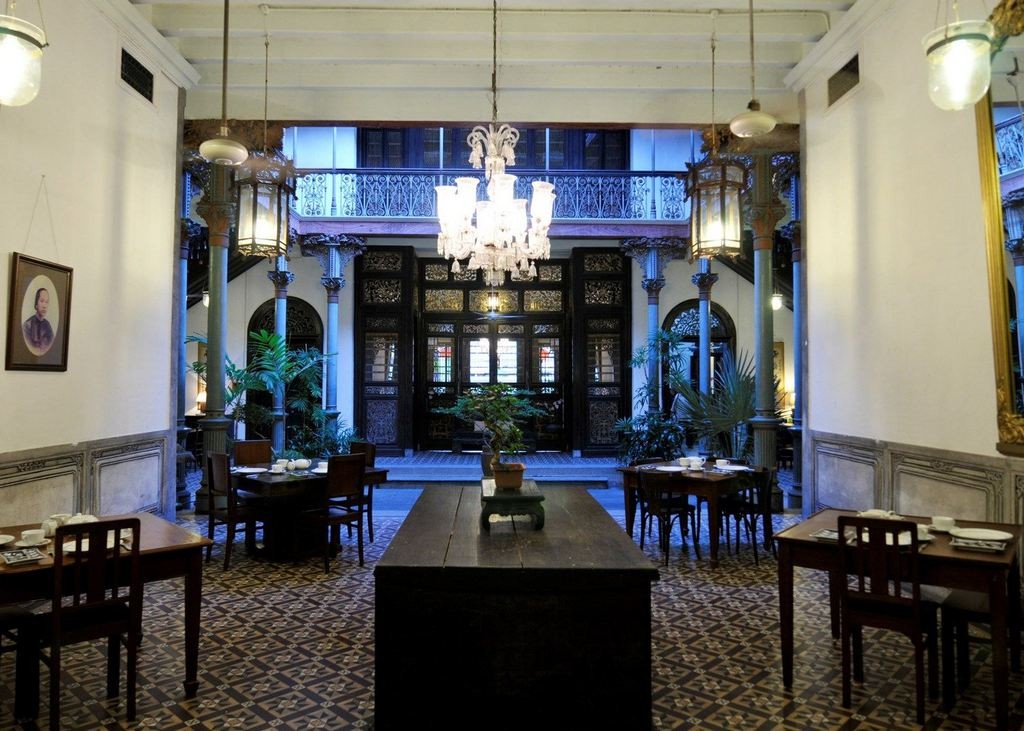 Blue Mansion has a grand and spectacular architecture with 38 rooms, 5 granite tiles courtyards, 7 stairs, and 220 wooden windows. Part of it is still kept as a private residence, the other part is a museum open for tourists to visit freely, there are also spend some rooms for homestay. Imagine if you have a chance to stay in this unique mansion once, what would it be like? 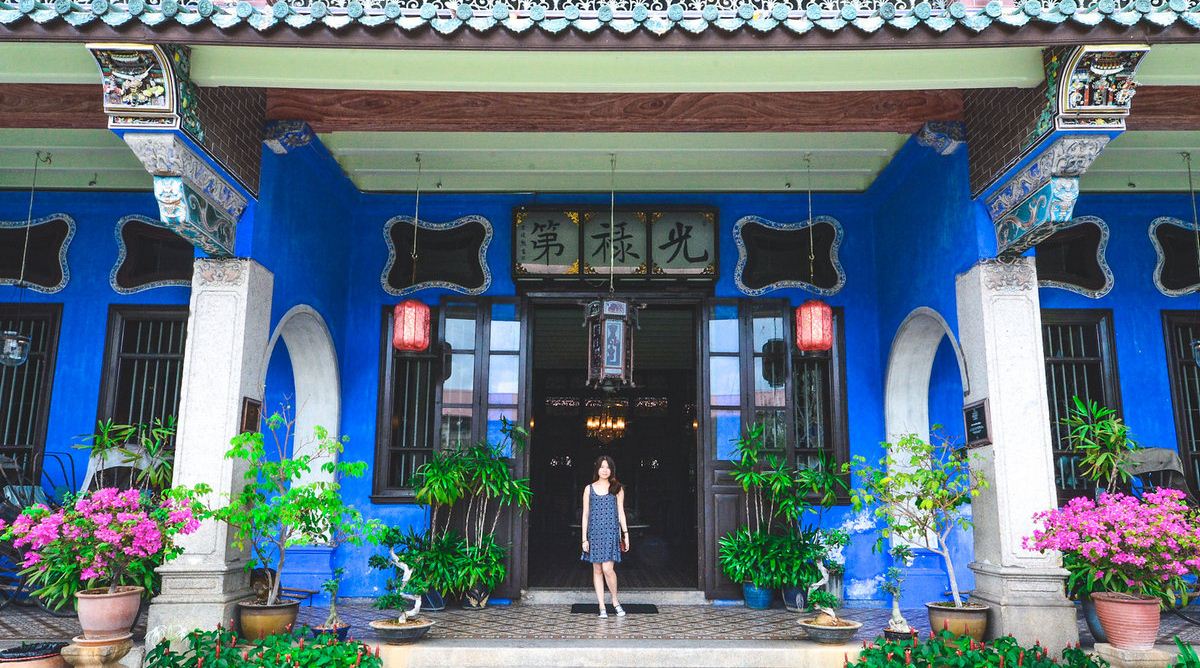 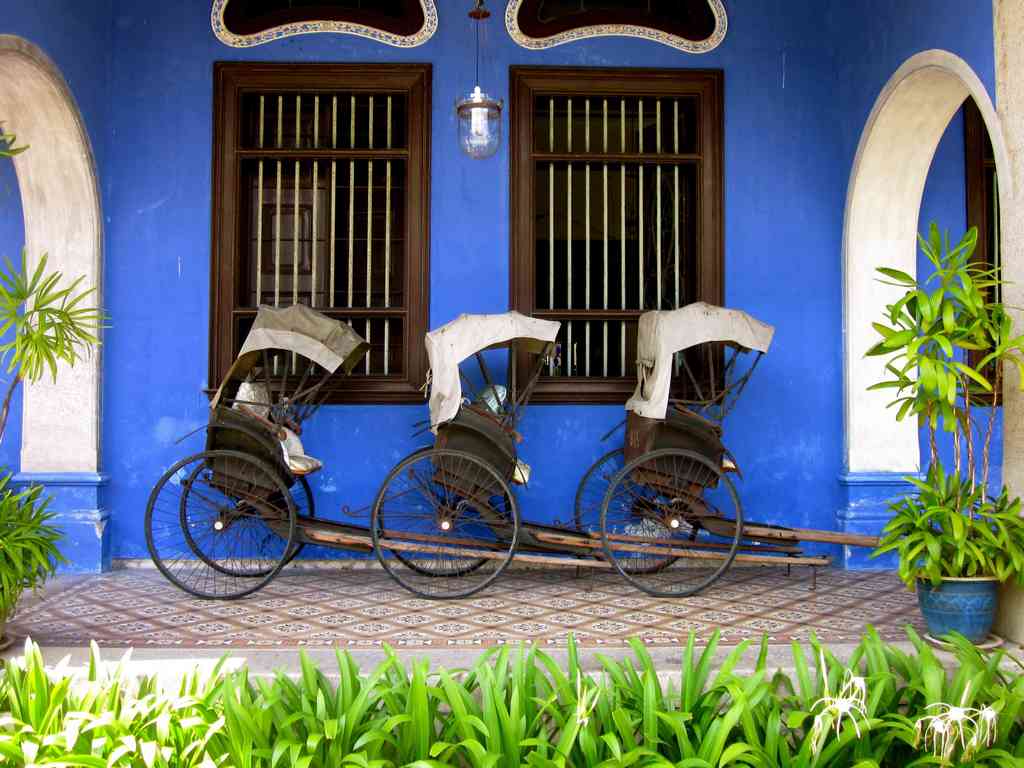 Cheong Fatt Tze is a traditional Chinese mansion, built in the late 19th century, using the best materials from around the world. It was extraordinary that a rich man, at that time, could build a mansion in Chinese-Hakka architecture style, right in the heart of Penang.