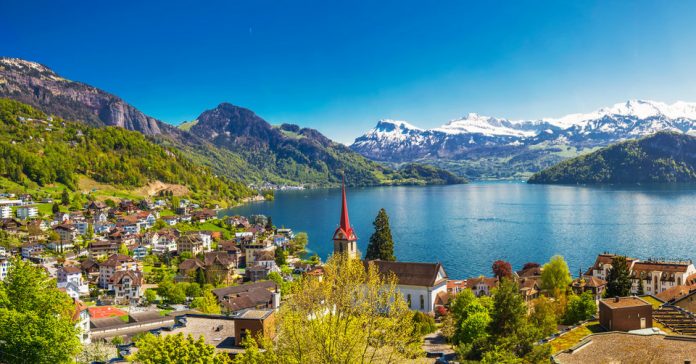 Lucerne (or Luzern) has long been considered the tourist capital of the expensive Switzerland. Located right next to the river Lucerne surrounded by mountains and valleys, the city of Lucerne stands out in a colorful panorama. It is not surprising if tourists like me are mesmerized by the scenery here, finding a seat in a simple design cafe, watching the mist floating on the lake in the early morning, watching the mountains, river and legendary wooden bridge Chapel from Middle Ages. Not only that, Lucerne also has churches in Baroque architecture style, the charm from the old streets. This place is always in a bucket list that must be included in each trip to Switzerland of any visitor. So, is Lucerne worth visiting? Let’s discover one of the most beautiful destinations in Europe through our Lucerne travel blog (Lucerne blog) with the fullest Lucerne travel guide (Lucerne city guide) for a wonderful trip to Lucerne on a budget for the first time from how to get there, best time to visit, and top things to do … to find out the answer!

It can be said that Lucerne is the most attractive ancient city of Switzerland. This historic city is located between the snow-covered mountains and is surrounded by a beautiful lake. The clear water of the Reuss River flows down from the top of the Alps to embellish the poetic and majestic features of the landscape make it more charming. Lucerne is the gateway to central Switzerland, about 60 km south of Zurich and the state capital of the same name. 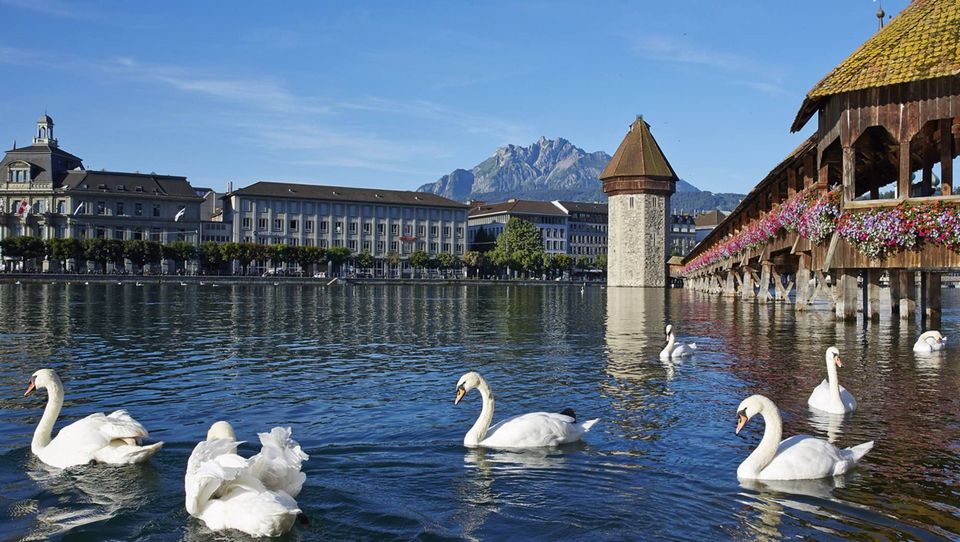 Originally, Lucerne was an ancient fishing village by the lake, where the monastery of Saint Leodegar was located. Later, when the railway was built, from an old fishing village, Lucerne gradually grew and became a favorite tourist destination.

Lucerne is a pretty small city, rich in cultural traditions with old houses, neighborhoods, blue lakes and trains going to the top of the Alps to watch the permanent ice … Not only that, Lucerne can be seen as a miniature of Switzerland because it has lakes, mountains, ancient architecture and many museums and people using all four official languages of Switzerland are Germany, France, Italy and Roman. 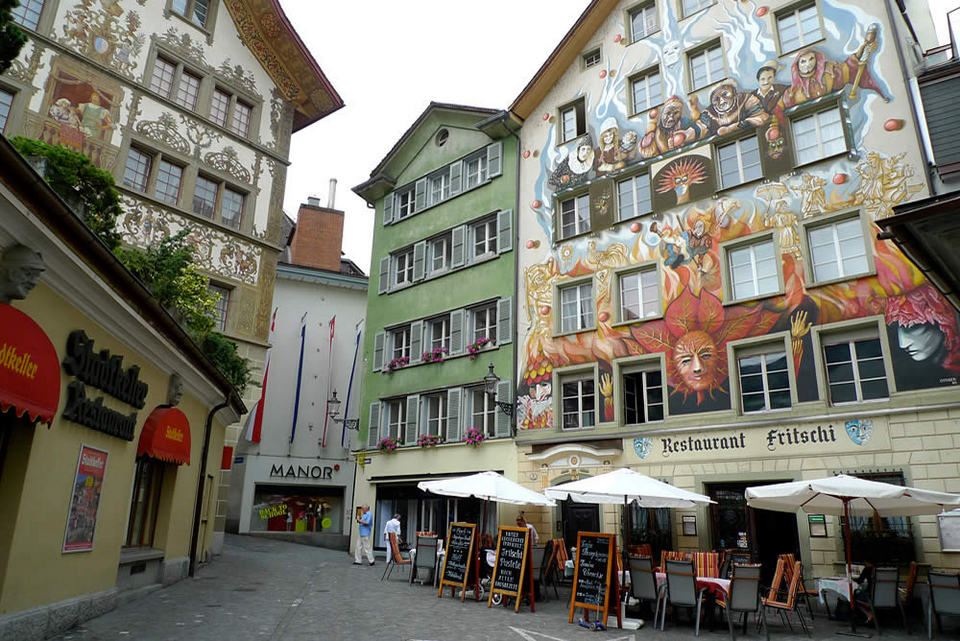 Lucerne travel guie: When is the best time to visit?

Switzerland lies within the region that enjoys four distinct seasons in the year, which is a temperate climate in valleys such as Lucerne. In addition to the cold winter, the rest of the seasons you can plan a memorable trip to this city. However you always remember to bring warm clothes if you intend to climb the snow-covered high mountains. The peak tourist season in Lucerne is from June to September, the rest from October to May each year is the low season, the price is cheaper and there are fewer tourists.

With favorable weather all year round, you can visiting Lucerne at any time. But for the convenient trip as well as save the cost, you should choose the low tourist months, should avoid June because of much raining and the best time is probably August.

The average temperature in Lucerne in August is 25 degrees Celsius, not hot, not cold, airy, sometimes there are cloudy days. Quite convenient for you to explore this city.

Lucerne travel blog: How to get to Lucerne?

The international airport nearest Lucerne is Zurich Airport (IATA code: ZRH), located 50 km from Lucerne, about an hour’s drive away. Right next to the aiport is the train station, you can catch trains straight to Lucerne. This is probably the most economical and easiest way. Train fares from the airport to Lucerne are 30 CHF/way for full tickets, and maybe only 15 CHF for a Supersaver discount ticket.

The most convenient means of transport to getting to Lucerne from other European cities is by train. The train in Switzerland is very beautiful, luxurious and the roadside scene is even more magical. If you fly to Switzerland, you will usually land in Zurich, from there you can take a train to Lucerne in 45-60 minutes.

To drive on the Swiss highway, you need to buy a toll road stamp valid from December 1, last year to January 31 of the following year (up to 14 months) at a price of 40 CHF. Buying on December 1, you can driving for a whole year (14 months) or buy on November 30, you only drive for two months but the same price. If you driving from another country, usually right after the border, there is a stamp-selling station. The tolls relatively are cheap compared to very expensive train prices. The country is relatively small, so going from one point to end point of the country and returning may not even spend a fuel tank, and you can free and comfortable to visit every corner, isolated roads in the country that has a more beautiful nature in fairy tale. So, if you can drive, have enough driving conditions in Switzerland, I recommend you choosing this way to explore the nation of thousands of lakes on the plateau.

Lucerne blog: Getting around Lucerne

Lucerne is quite small, so to getting around the city is mostly on foot. If you are afraid to walk, you can use the public bus system or tram. Most routes run to Lucerne central station. The city’s main bus station is located next to the train station.

Lucerne has a public bus system managed by VBL (www.vbl.ch), which the ticket price is sold by zone. The price of Swiss public transport is relatively expensive, the price of 1 zone, valid for one hour is 4.1 CHF.

Public transport in Lucerne divided by zone, if it is a tourist, the zone to go mainly will be zone 10. The daily ticket price for 1 zone is 8.20Sfr (half-fare is 6.20Sfr), and single ticket apply for 1 hour is 4.10Sfr. The single ticket price for a short distance trip with maximum 6 stops, validate in 30 minutes is 2.5 CHF.

Parking in the center of Lucerne is relatively expensive. During this trip, I found a parking lot, a little far from the center, but much cheaper and comfortable parking time. Parking (GPS: 47.050970, 8.337096) is located opposite the Lido beach (Lidostrasse 6A, 6006 Luzern) and right next to the Swiss Transport Museum (Musée suisse des transports – Verkehrshaus der Schweiz). Parking fee is 5 CHF for 24 hours. It takes about 30 minutes to walk to the center from the round of Lake Lucerne.

Boat trip on the river Lucerne

In addition to nearby places, if you want to go to some of distant places such as Lido beach or Swiss Sports Museum, you can take a bus or boat. The boat runs every hour and the pier is just outside of Lucerne railway station, you just buy a ticket and get on the boat.

Lido beach is a great place to go because it is really a large ecological area, here you can feel what is the typical autumn of Europe, the leaves of the trees cast shadows down on the still lake in the clear blue sky. The scene that we sometimes see only in the pictures of the autumn of Europe. Indigenous people often come here to camp or sunbathe, breathe fresh air.

Lucerne travel guide: Best places to visit and top things to do in a day in Lucerne

Lucerne is about an hour away from Zurich by train, leaving the train station, everything in front of you will be a dream scene of Lake Lucerne. Continue straight to the legendary Chapel Bridge, the most famous tourist attraction in Lucerne that anyone who comes here must visit. The wooden bridge over this Reuss River was built in the 14th century and is one of Europe’s oldest bridges. It was almost destroyed in 1993 but now has been restored and repaired.

Walking along the bridge you will feel the difference of the Chapel bridge compared to any of the bridges before, everything made from wood gives off a strange warm feeling. The roof of the bridge also is designed by wooden, quite sophisticated, thick and firm. The Wasserturm (Water Tower) towering in the middle of the bridge creates an important highlight, inside the bridge there are paintings, stories about history, and then you will see whole Lucerne as a huge exhibition of paintings, everywhere in the city. 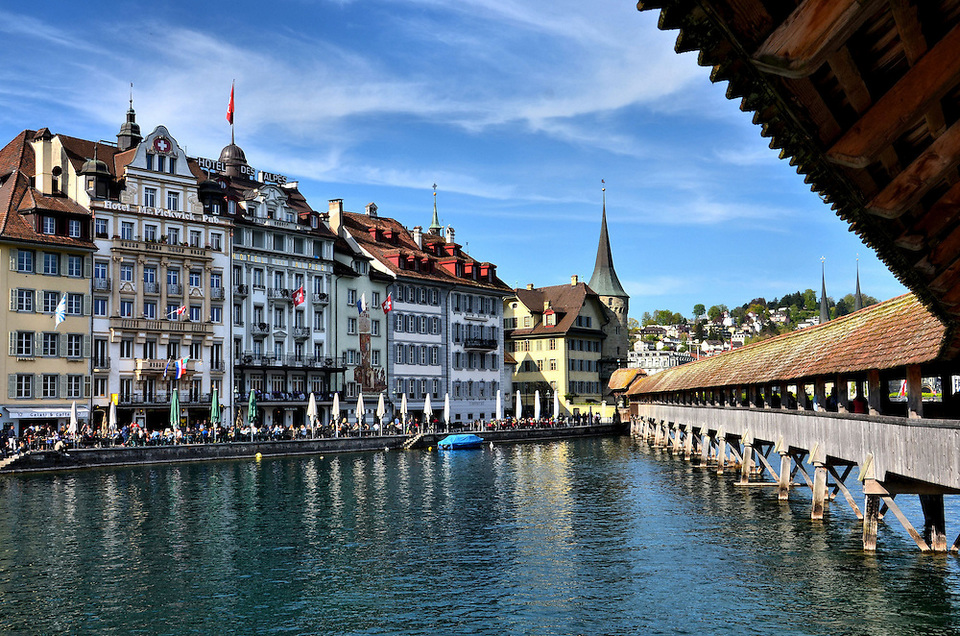 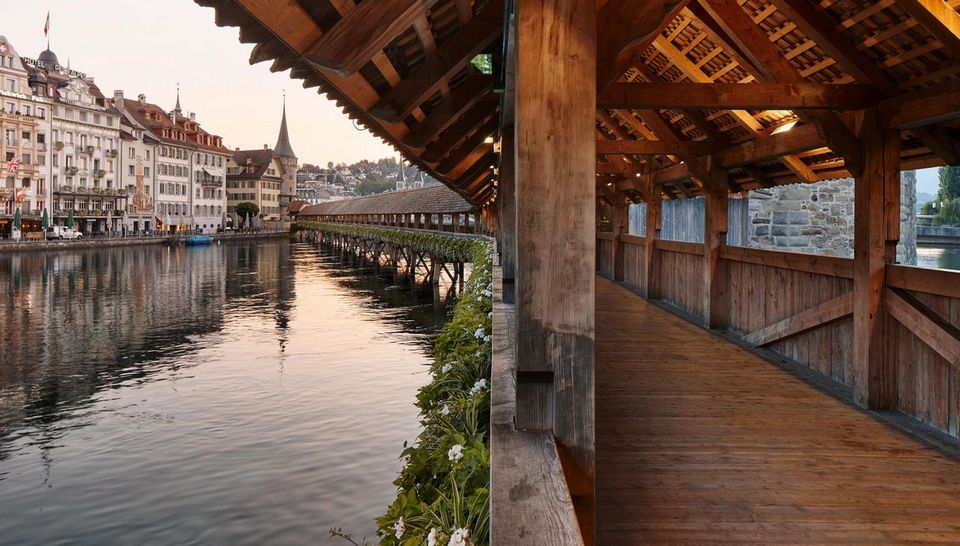 This 204m long bridge is not only famous for its age but the bridge architecture is also very special. There are drawings on the bridge that illustrate the history of Lucerne and the life of two patron saints for the city, Saint Leodegar and Saint Maurizius. It can be said that the Chapel wooden bridge along with the octagonal water tower crossing the Reuss River at the end of Lake Lucerne is a special architectural work of this city. With a flowering bridge consisting of bright red geraniums and dark pink begonia flowers placed in pots on either side of the outer wall of the Chapel Bridge and Wasserturm tower are now considered to be the unique symbol of Lucerne city. 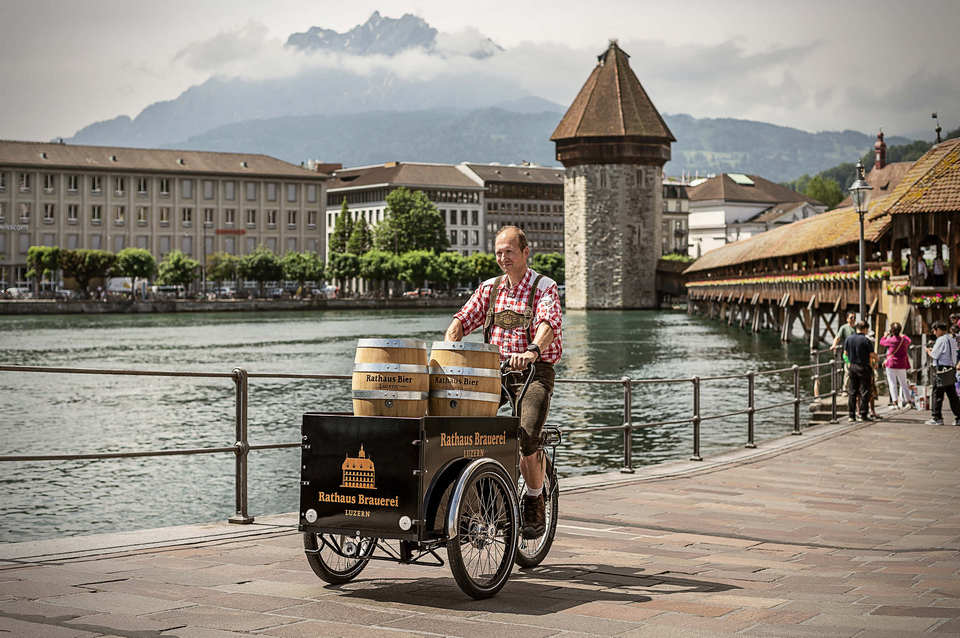 Leaving the Chapel bridge before going on, you can enjoy a snack at the Rathaus Brauerei restaurant, order a little salad, traditional Swiss sausage and a little wine, you will feel refreshed for the spirit to prepare for a day walking around the city. 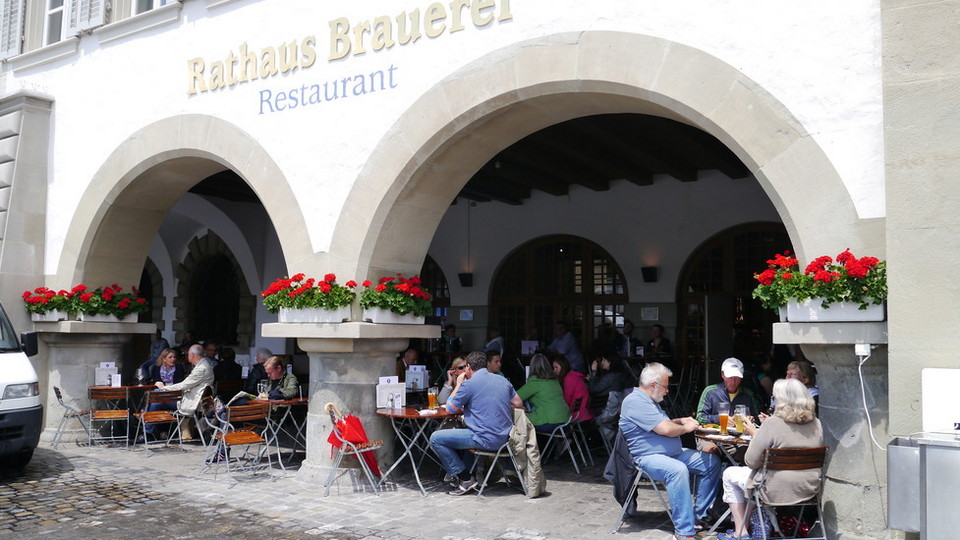 Going into the old town, cross the streets, small alleys, on both sides are small shops like in Venice. But Lucerne is much more different than that, it’s buildings with wall paintings (building mural art), even the windows also make highlights for that wonderful pictures. 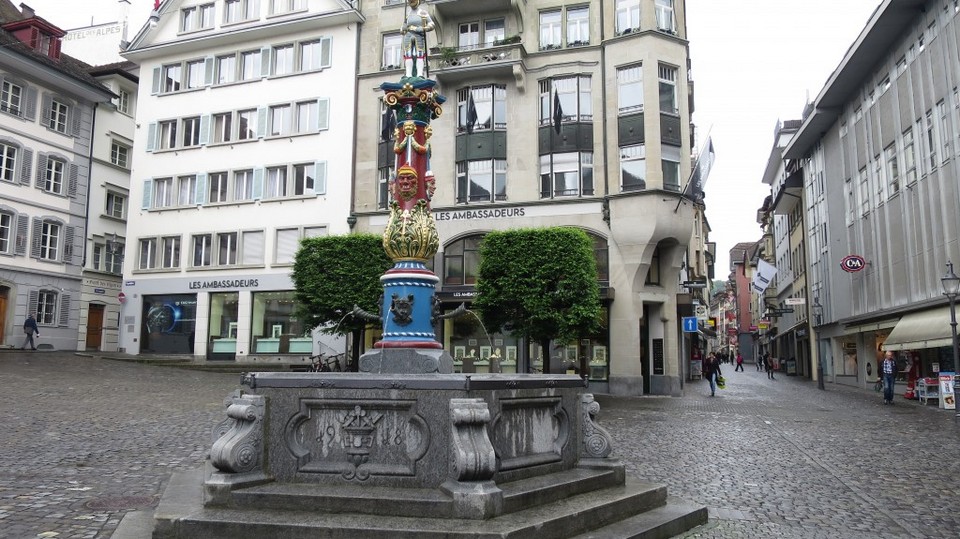 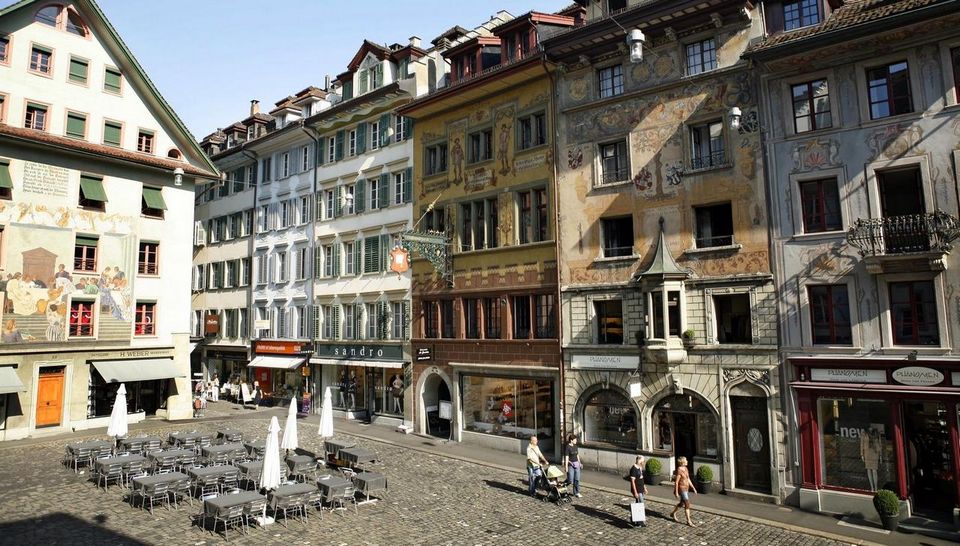 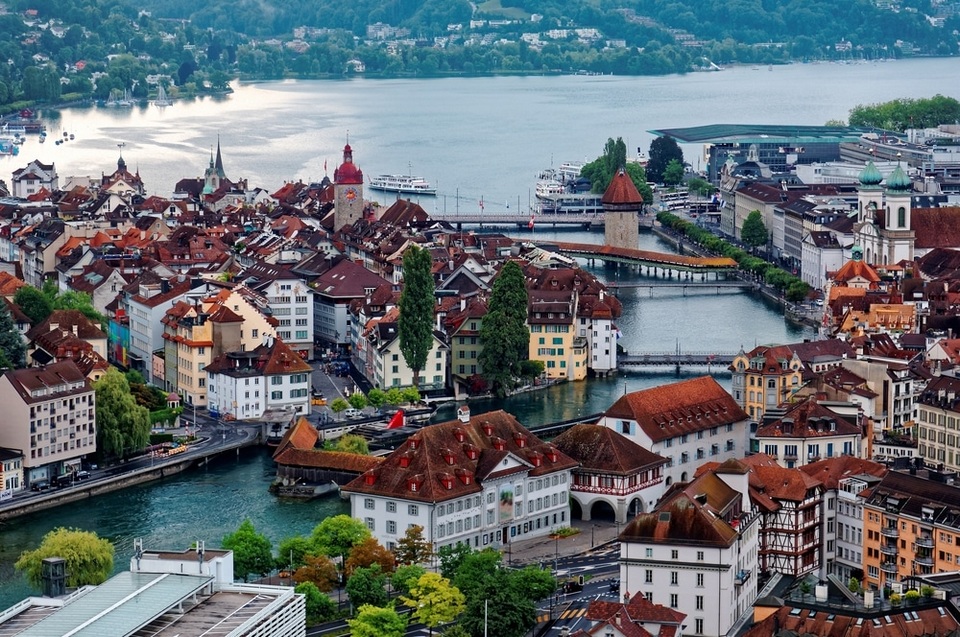 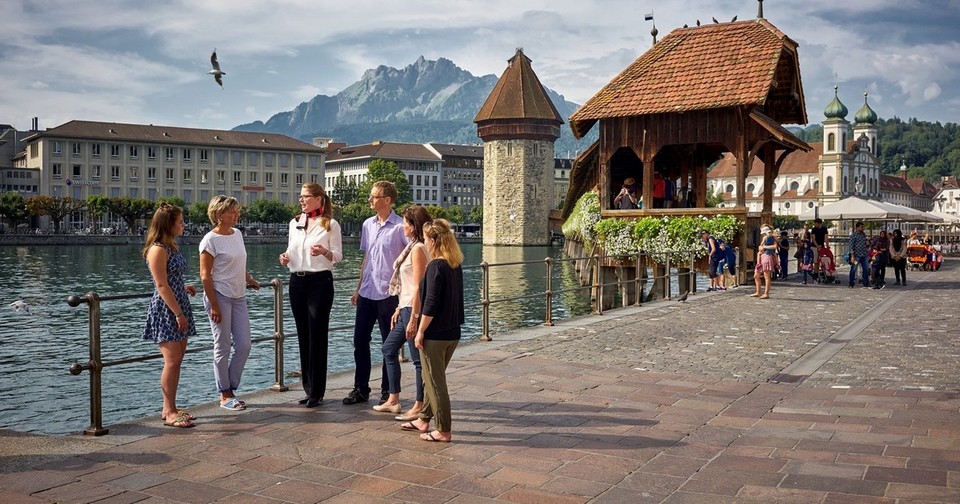 Lucerne is also known for its Musegg Wall surrounding a small hill, so you need to climb up a short row of stairs to get up there. From here the whole city appears before your eyes, if you come in the winter it will be the lush green grass with a little white snow remaining adorn the landscape more romantic. These are the details that really hard to ignore of Lucerne, the small details but make an unforgettable trip. In addition to the ancient wall this area also has a number of towers that you can climb, especially the most famous clock tower here. 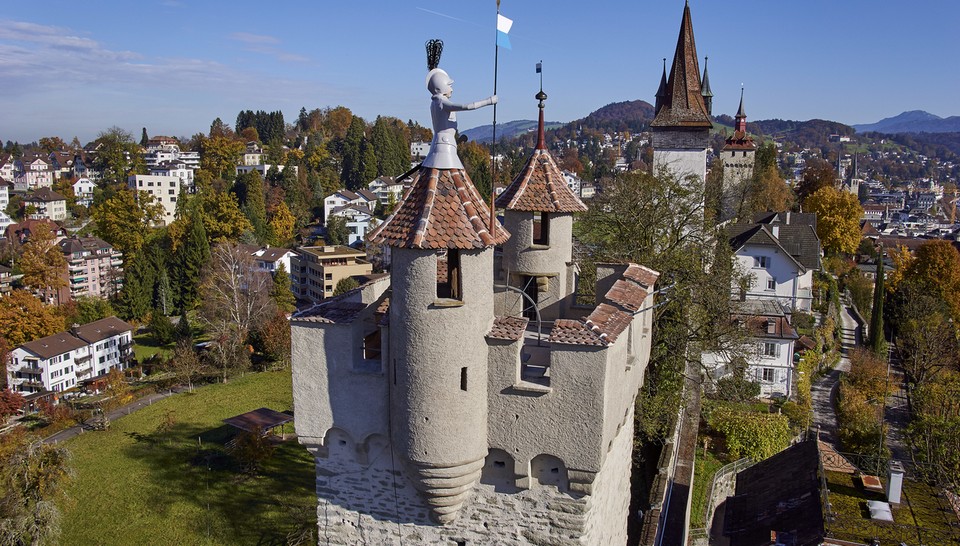 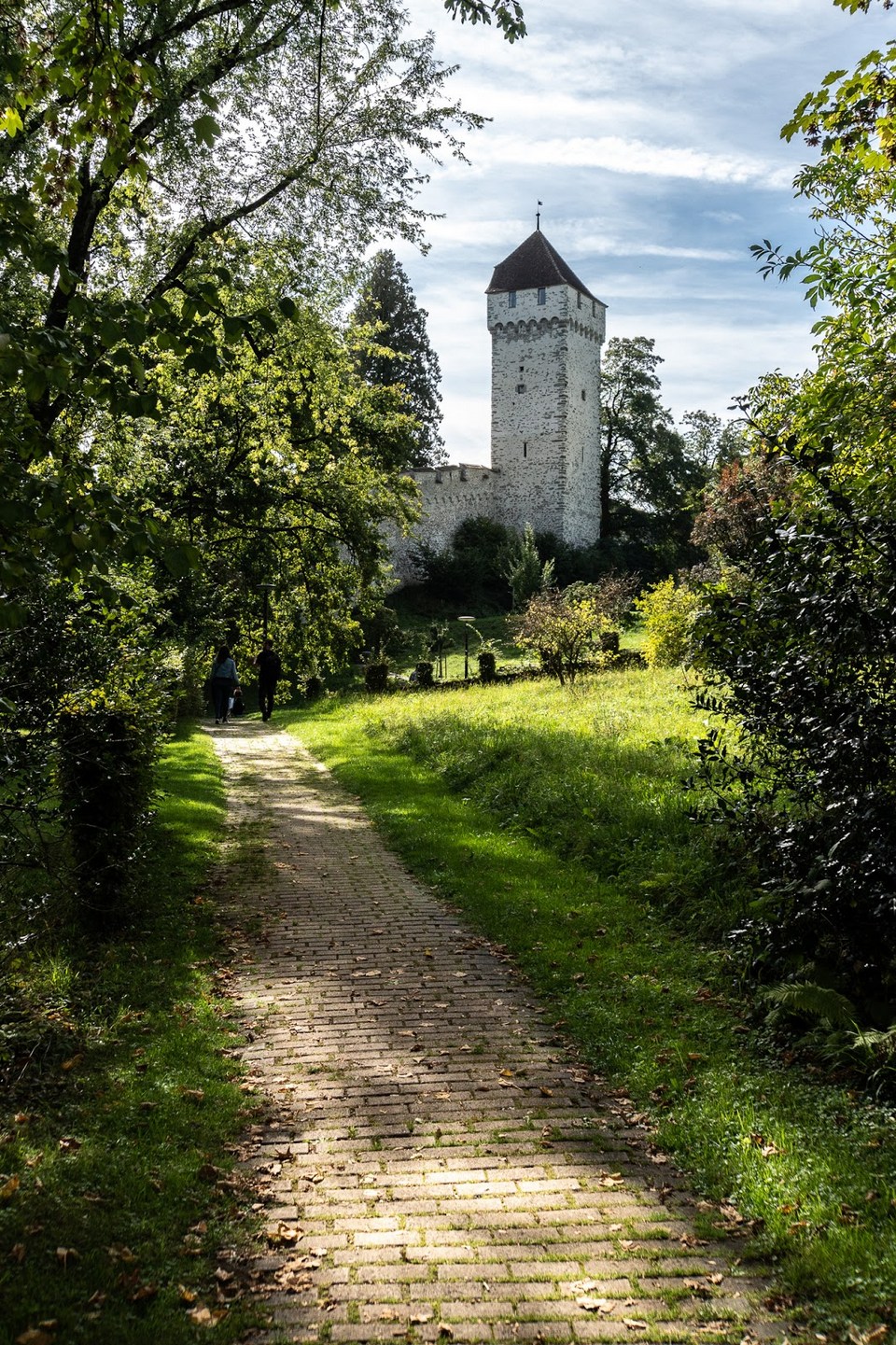 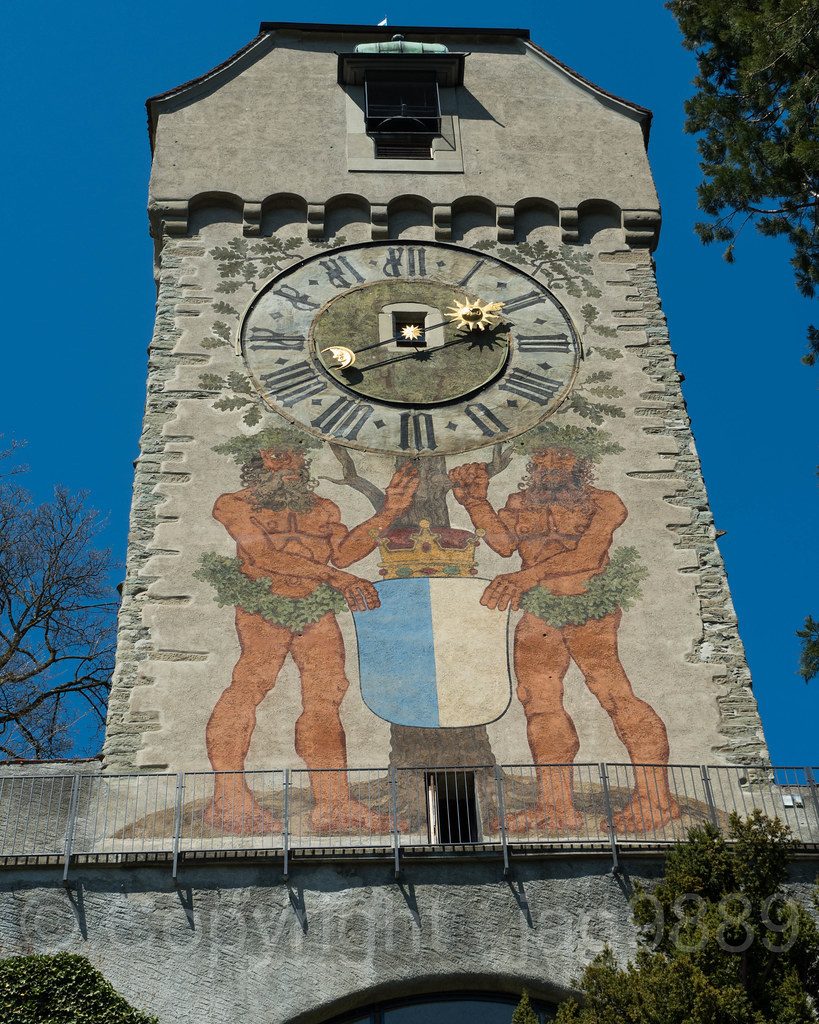