There isn’t  any journey “treat” me by the beautiful words like coming to Bergen – the second largest city in Norway, the Nordic country ranked first in the list of the happiest countries in the world in 2017. Unlike any other city in Norway, Bergen retains its mossy features with many colorful and ancient houses that stare into the North Sea. It is the time for me to be immersed in the land of peace, the pristine and spectacular scenery. Let’s discover Bergen through my trip to Bergen — The promised land of peace of Norway below.

| my trip to bergenVisiting Bergen – the promised land of peace

“Berg”, which is the etymology of Bergen and the familiar name of the primitive Nordic people, means “mountain” or “mountain cliff.” And the cliffs of the two sides stand up, sandwiched between a stream of smooth and calm water, with the depth of the image of Norway, called native fjords by the local. These are narrow bays because of the glaciation when melt abrasion forms. The statistics are available for 1,190 fjords throughout Norway.

And when you have mentioned to the fjords, you must remember Bergen because this is the gateway to explore the pristine beauty of the famous fjords in Norway. 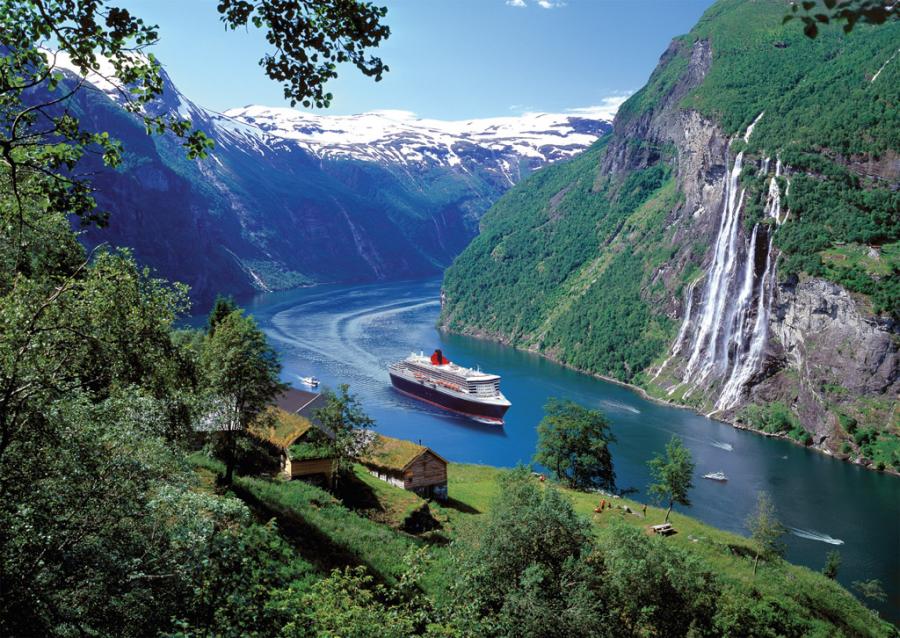 The boat leaves Zacharias Bryggen harbor in the center of Bergen, leaving World Heritage Site as a seaport complex with the antique roofed houses such as the armor of Viking warriors on the way of exploration, expanding the cruise from northern Europe to out of the world.

The city is far away, the fairy scene gradually opened in our eyes with the green carpet of pine forest clinging to the cliff. The clear and blue water of the Osterfjorden Fjords reflects the enchanting beauty of nature. It made the traveler on this boat wonderfully amazed by the magnificent because they have never seen this magnificence like that before

Osterfjorden Fjord’s natural landscape tour continues for almost 30km, deeply into the territory of the Hordaland province. Sometimes on the journey, the pair of cliffs along the mountain where the waterfall helps travelers catch the flow from the ice melts to share drinks. The pure water which is safe for drinking directly is a luxury if compared with a journey somewhere in the hometown. 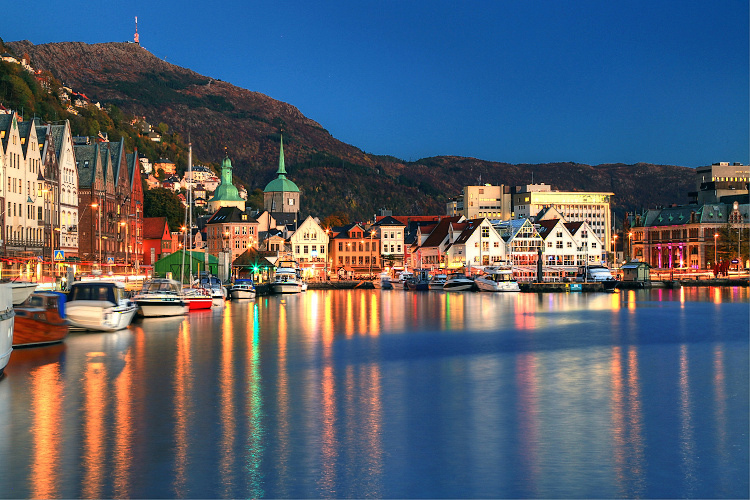 The train crosses over to Vikanes, Mostraumen, where the cliffs of the hills fuse into a narrow bay. Then it approaches the end of the fjords, Modalen, where the homes of the indigenous people are separated from the civilized world. The guide said that the owners of these houses are the super-rich. And a small and beautiful house, beside the mountainside, would bring the feeling of living in the gateway paradise, land – heaven – human – nature as a harmony. 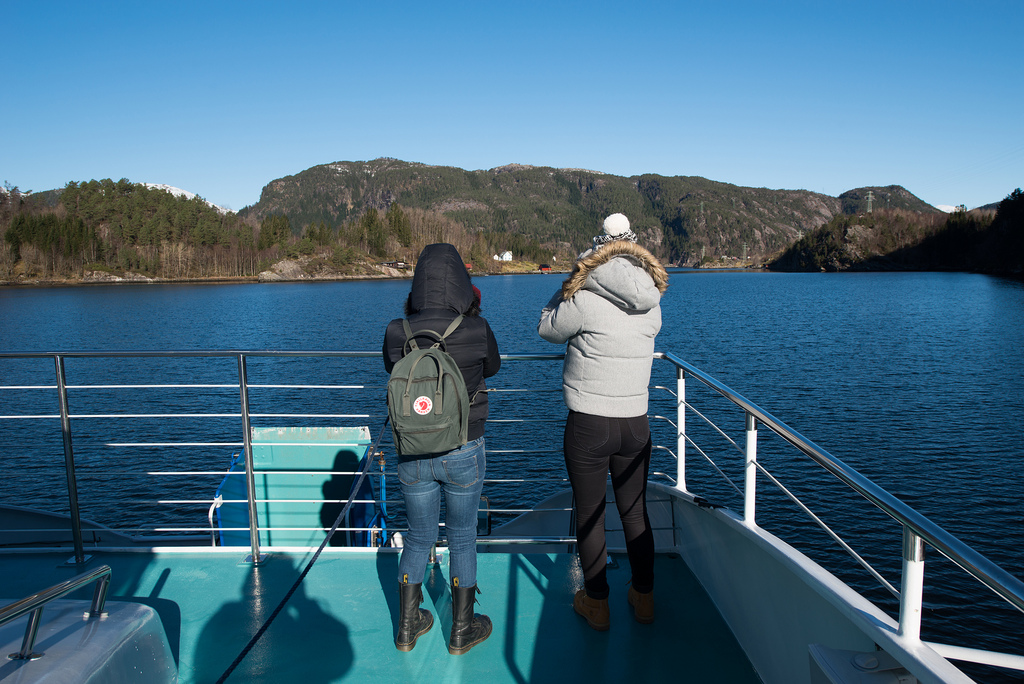 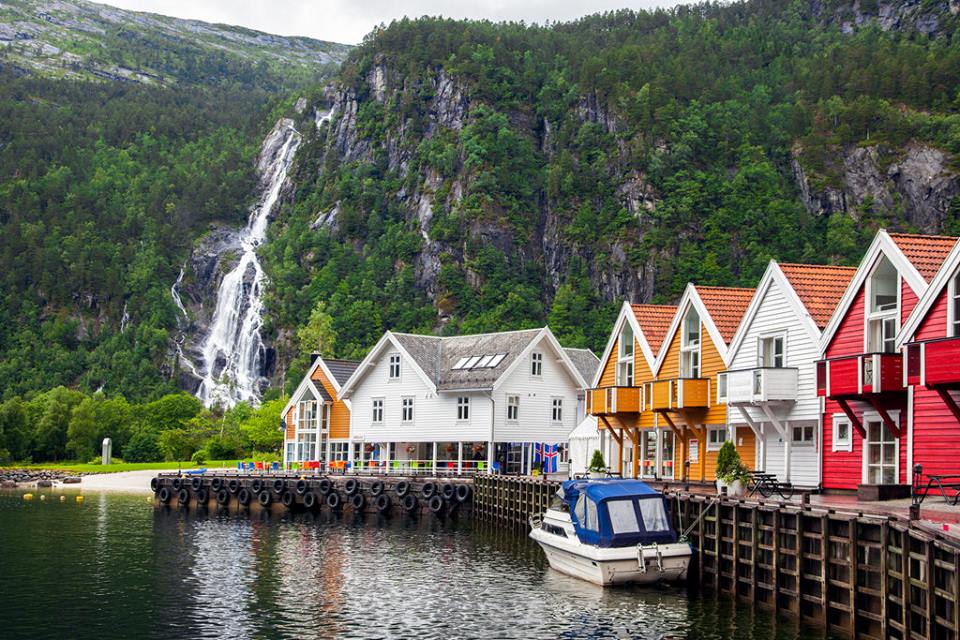 After more than half a day of sightseeing, the travelers return to reality when the ship docked Zachariasbryggen. An old Bergen opened, the city was founded by King Olav Kyrre from 1070, was the capital of Norway and gradually became the most important commercial center in Norway thanks to the port. 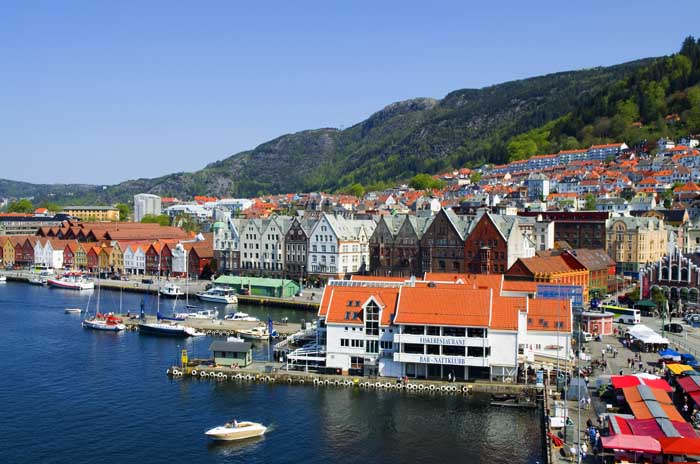 Many people think that Bergen was no longer able to retain its rustic beauty, but thanks to exploration and oil exploration in the 1970s brought with it the resources to help Bergen revive. The former warehouses are embellished, edited, preserved, converted into museums, restaurants, souvenir shops and recognized as World Heritage Sites (since 1979). 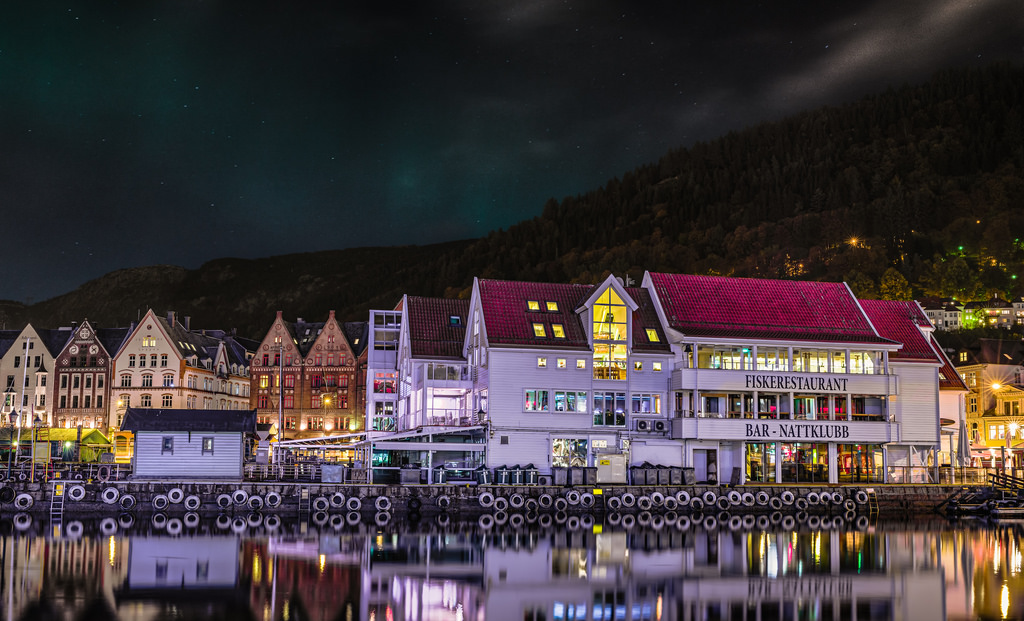 Next to the harbor, another ideal destination for both locals and visitors is the fish market every day. It is no longer a major port of call with fish as mainstream as more than 800 years ago, but the place is still attractive. A walk through the market will be an opportunity to meet the indigenous people, explore the variety of fish caught in the day.

The fish market in Bryggen is also a gastronomic space, with most of the products are made from fish, eels, shrimp, and endemic species such as whales and snow crabs. The most popular delicacies include grilled salmon, fried herring, grilled fish and smoked eel are suitable for the taste and easy to remember when referring to Bergen.

The beauty of Bergen is called “the land of promise” for those who love peaceful life. It is a place to live slowly, enjoy the great value from the natural landscape, the historic value of the ancient city and meet the friendly people. Every year the travelers come to Bergen because it is one of the beautiful cities of the whole of Europe, convergence enough charming, ancient and primitive, contributing to Norway the happiest in the world in 2017.

Norway and some “medals”:

Some best day tours, trips, activities and transfer services, tickets in, from and to Bergen you can refer to

Are you looking for more top things to do in Bergen: Tours, activities, attractions and other things? Let’s check it out here.