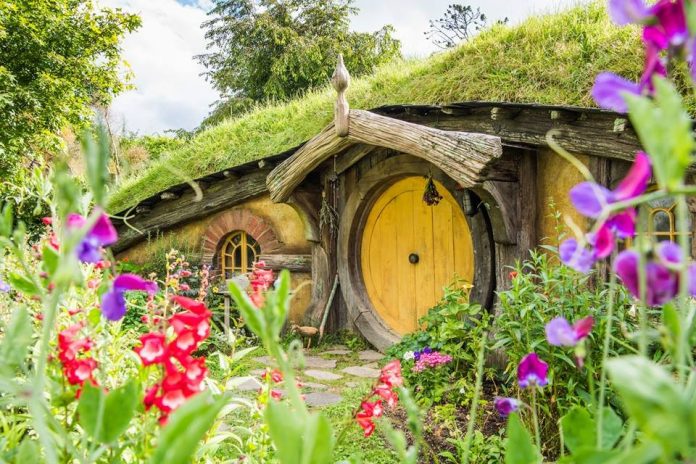 Film setting of “The Lord of the Rings”

Hobbiton fairy village is the place that the crew “The Lord of the Rings” used as a film setting. It is becoming one of the most attractive tourist destinations in New Zealand.

The film “The Lord of the Rings”, based on the story of the author JRR Tolkien, has bedeviled millions of hearts cinema enthusiasts from all over the world thanks to the spectacular and mysterious scenery of Hobbiton fairy village.

Hobbiton houses were built semi-submersible in the ground in the mountains, romantic countryside that always fascinate viewers.

To serve the footage, the crew had to collect a lot of oak trees in the nearby area to cover around the house to make up the ancient landscape close to nature.

After the huge success of the film, everyday thousands of tourists from around the world come to visit this fairy village.

From the main entrance gate of the ranch, visitors will be switched to a dedicated car which is friendly to the environment, or ride a bike to go into the village.

The climate here is always cool and fresh all year round with attractive immense evergreen hills.

Romantic scene as in a fairy tale of the Hobbiton village, with a combination of small nice houses immersed in the high hills.

The main attractive point of the village is the Bag End home of Bilbo Baggins – the dwarf in the Lord of the Rings series.

The houses lie half submerged in the ground, half rising from the surface, which is covered in green grass carpets.

The combination between architecture and nature create a vaporous picture.

Because the house was built underground, the air inside is always cool.

The vegetable garden of the dwarves in the film are reproduced meticulously in every detail.

Visitors can admire the chessboard where the dwarves sitting daily. The unique structure of the cages designed for the birds to shelter.

The more visitors go inside, the more they feel lost in in fairyland, with small houses outstanding in a stunning natural landscape.

The houses along the hill will catch your eyes. They are built and designed meticulously, with arched stone bridge, narrow walkway between houses and hillside.

It would be very romantic when you can sit inside to enjoy a hot cup of tea or a glass of beer, cold fruit,…

The panoramic view of the film setting is remained and this helps Matamata to become an attractive tourist destination of visitors from all over the world. This is also an ideal place for those who love to walk under the gentle sunlight.

How to get to Hobbiton

If you have a car and can get to Matamata yourself, you can book a tour directly with the farm, Hobbiton Movie Set Tours.

How to get to hobbiton from auckland: If you don’t have a car and would like to do the tour from Auckland (How far is hobbiton from auckland: less than 2 hours away), We would highly recommend enquiring with Red Carpet Tours about their Hobbiton Day Tour — they started Lord of the Rings tourism in New Zealand and really are the best!