Mexico City is having a major architectural moment. The country is producing many fine architects who, rather than leaving Mexico to pursue careers, are staying home and helping change the face of their capital city. One of those architects is Enrique Norten, whose bold, graphic redesign of CENTRO, a university for creative studies, covers some 55,000 square feet. It was done in partnership with Dutch-born, Mexico-based architect Jan Hendrix and features LEED-certified buildings and a public park. The campus reopens in September 2015.

The late Pritzker Prize-winning architect Luis Barragán, born in Guadalajara, designed homes, churches, and other buildings throughout Mexico. His home and studio in Mexico City, on the southern edge of Chapultepec Park, is a UNESCO Heritage Site. Up close you can see Barragán’s angular, brightly color-blocked work.

Museo Soumaya, designed by Mexican architect Fernando Romero and funded by Mexican billionaire Carlos Slim (Soumaya was the name of his late wife), is an eruptive, undulating pair of buildings in the posh Polanco neighborhood. The silver structure pictured here is known as the Plaza Corso. It houses the modern section of the Museo Soumaya’s extensive art collection. When it opened in 2011, it created a huge splash and is now the most-visited art museum in the entire country.

The Camino Real, which is also located in Polanco, bills itself as a “Hotel-Museum.” Designed by Mexico City native Ricardo Legorreta in 1968, the Teōtīhuacān-style pyramid shares space with bright pink and yellow geometric patterns. It was made as an homage to both modern and ancient Mexico.

Down the road from the Museo Soumaya, is Museo Jumex, which reportedly has the largest private collection of contemporary art in Mexico. The jagged-topped museum was funded by Carlos Slim and designed by a British-based architecture firm, headed by David Chipperfield.

Arcos Bosques, or “Forest Arches,” is an office and high-end mall complex in the D.F.’s Santa Fe business district. Designed by Mexican architect Teodoro González de León, the interconnected buildings are 36 stories tall on each side (making it the sixth tallest building in the city) and boast a rooftop helipad for VIP guests. Around town, Arcos Bosques is often called “El Pantalon,” or “The Pants,” because of its shape.

The Calakmul Building, usually called “La Lavandera” or “The Washing Machine,” is also located in Santa Fe. Mexican architect Agustín Hernández Navarro named the building after an ancient Mayan city, even though the concept is thoroughly modern. For a long time, Santa Fe was a falling-apart neighborhood on the edge of the city, but gentrification and an influx of industry has made it a haven for new, creative architecture and design. 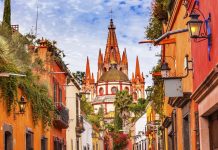