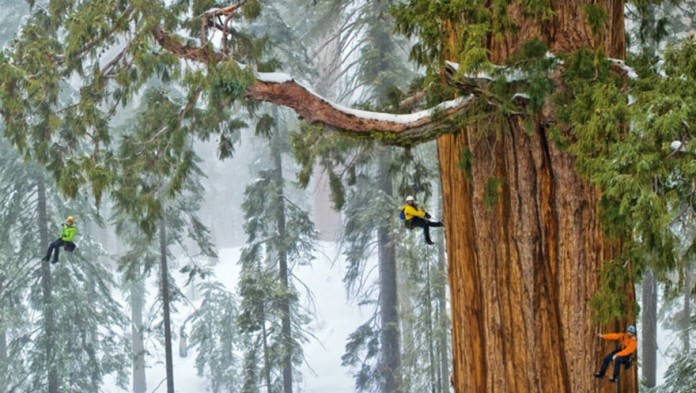 This enormous Sequoia tree, located in the Giant Forest of Sequoia National Park in the United States and which is nicknamed The President, is 3,200 years old. The tree is in fact so huge that for years no one was able to find an effective way to take one single photo of it which showed The President in its entirety. Recently however, a team of dedicated photographers and scientists working for National Geographic finally managed to create a single visual record of this colossal wonder for posterity.

This is such a fascinating story that we just had to share it with you.

The President is a Giant Sequoia tree which towers 75 metres above the Earth. It has a volume of 1,275 cubic metres.

The trunk of the tree is 8 metres wide, whilst its might branches hold up an incredible two billion needles — more than any other tree on the planet.

What’s more, The President is still growing as fast as it always has.

Giant Sequoia trees only grow in one place in the whole world: the aptly named Giant Forest of Sequoia National Park in California, USA.

For a long time, no one found a way to take a single, detailed picture showing the whole majesty of The President.

A group of professional photographers from National Geographic working together with scientists recently managed tot achieve this by no means simple feat for the first time. They had to use a huge amount of modern equipment to scale this behemoth — which, in the opinion of some specialists, is the tallest tree in the world.

After 32 days of hard work and having taken 126 separate photographs, the team finally produced a portrait of The President which is, quite simply, breathtaking.

Here it is, in all it’s glory.