Brussels (or Bruxelles) is a famous city because it is not only the capital of Belgium but also of the European Union, and the headquarters of the NATO military bloc. It sounds a bit “academic” but actually traveling to Brussels you will be even more surprising because of the cultural and linguistic diversity (a majority of Belgians speak French or German) and a lot of other “specialties” are only available in this beautiful city. So, is Brussels worth visiting? Let’s discover one of the most visited destinations in Europe through our Brussels travel blog (Brussels blog, Bruxelles blog) with the fullest Brussels travel guide (Brussels city guide, Brussels visitors guide) for a wonderful trip to Brussels on a budget for the first time from how to get there, best time to visit, and top things to do… to find out the answer! 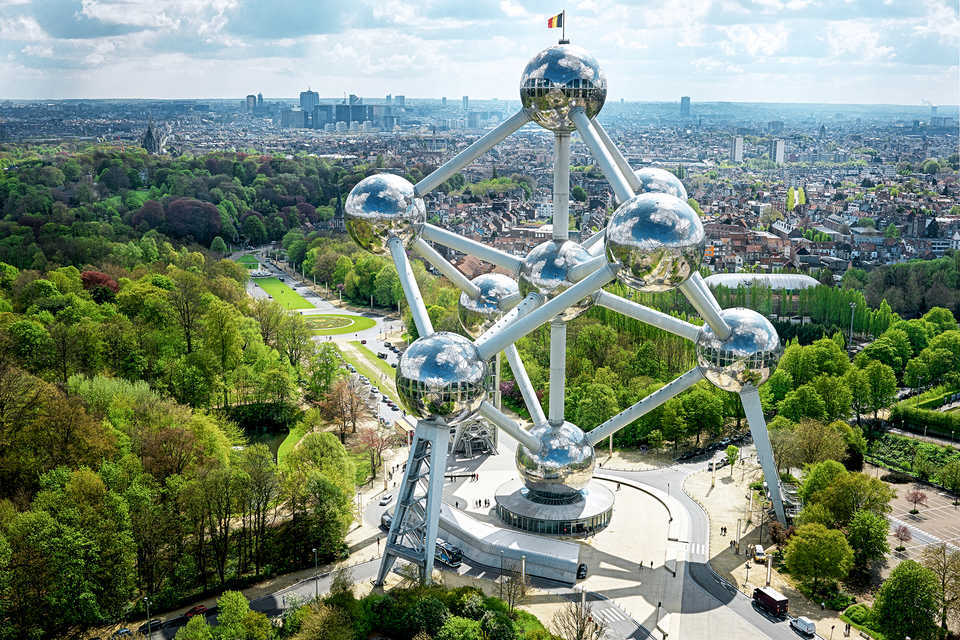 Located between France and the Netherlands, I arrived in Brussels only 3 hours by train from Paris. With 1 to 2 days for this city in Europe travel itinerary, you should consider visit the most famous attractions in Brussels below.

Brussels visitor guide: When is the best time to visit?

Like Amsterdam, the best time to travel to Brussels is in Spring (April or May) and Summer (September or October). At this time the weather will not too cold. However, July is the hottest time of the year and is the peak tourist season. Or you can plan to visit Brussels from August 16-19, every 2 years in even-numbered years, there will be a flower carpet festival right at the Grand Place, extremely spectacular! 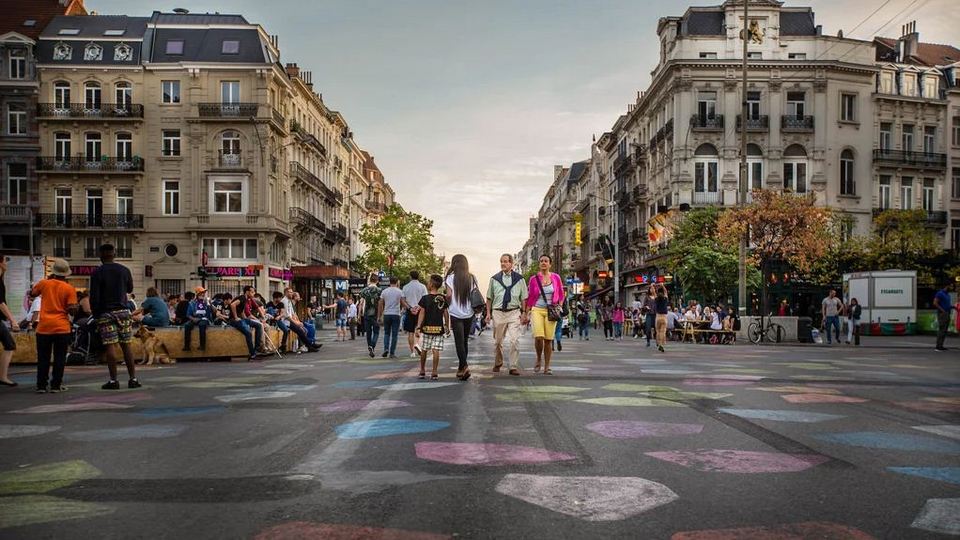 If you can tolerate the cold under 0 degrees C, want to experience the feeling of watching snow and Christmas in Belgium, you can travel to Brussels in the winter.

Brussels travel blog: Best places to visit and top things to do in Brussels 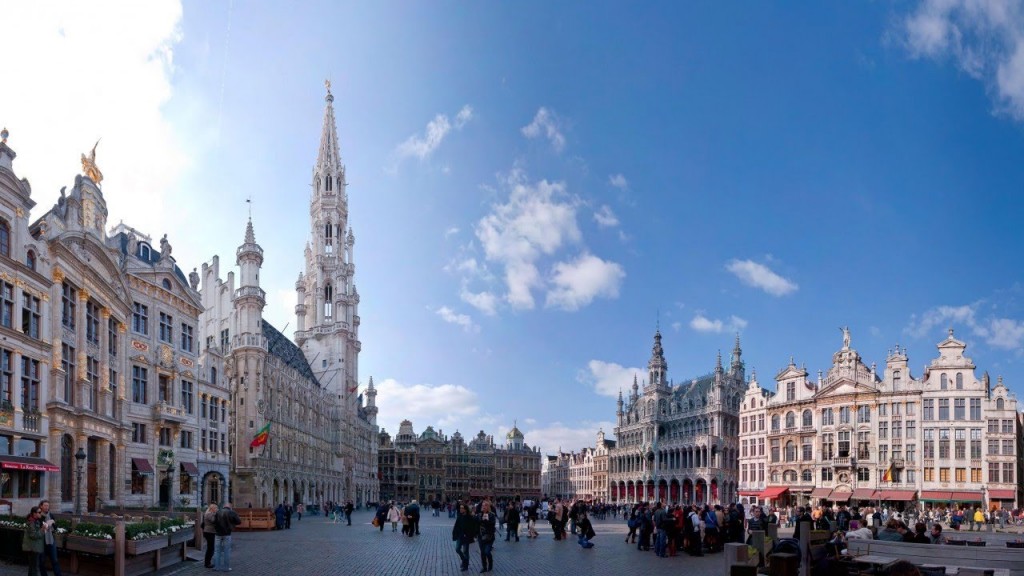 Just 5 minutes walk from the central station, La Grand Place is known as a cultural center of Brussels with lots of shops, restaurants, cafes or museums, recognized by UNESCO as a cultural heritage world in 1998. This is the place where meetings of indigenous people took place for centuries. It is easy to understand that Grand-Place de Bruxelles is like the old town in Hanoi (Hanoi’s Old Quarter) and the names of the streets here are similar to Hanoi’s 36 streets. 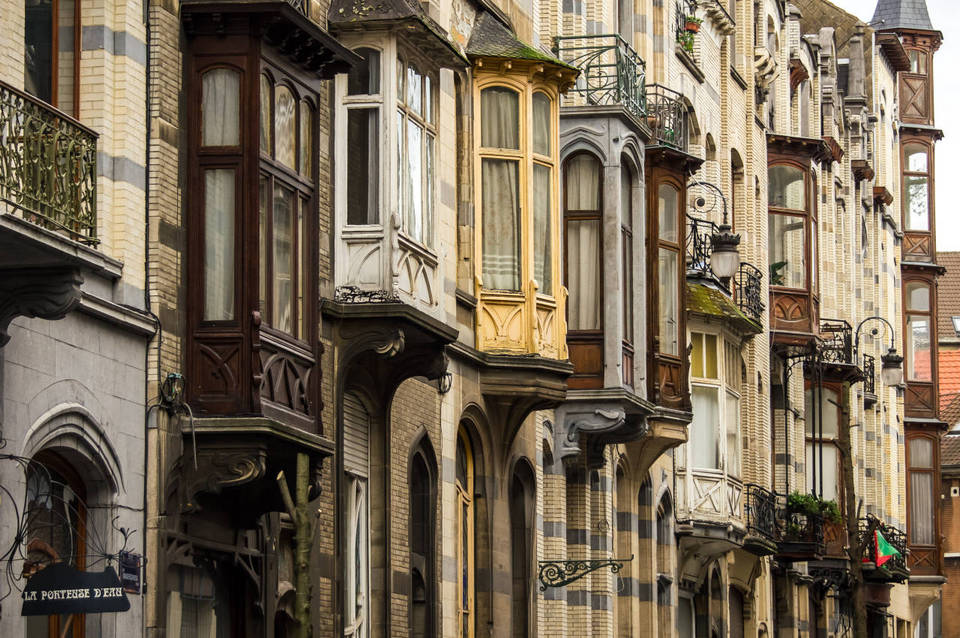 First when you entering the square will see City Hall (Hôtel de Ville in French), the highest tower and also the most famous place here. From City Hall you mark the landmark to explore other buildings in this area. If Hanoi has 36 busy crowded streets, Grand Place also has 35 neighborhoods, buildings which represent cultures in different periods, can be said here with very rustic names as in Vietnam, such as avocado street, cheese street, coal street, herring street, .. they all have a common feature is the splendid and magnificence that create a huge square area of ​​cultural and commercial centers that never seen before … These buildings were built centuries ago and were restored and repaired after being destroyed by the French King Louis XIV in the 17th century attack. 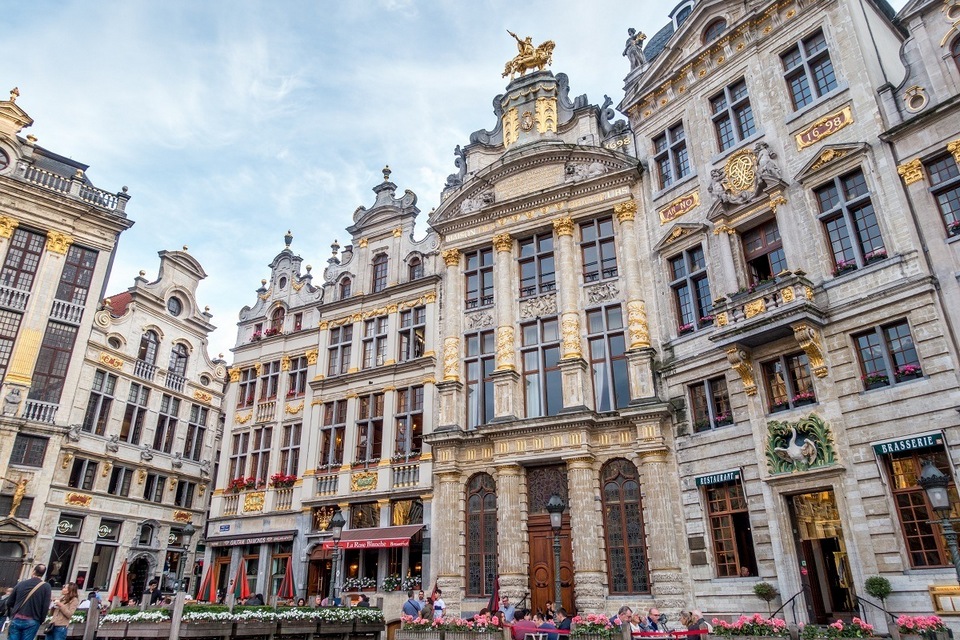 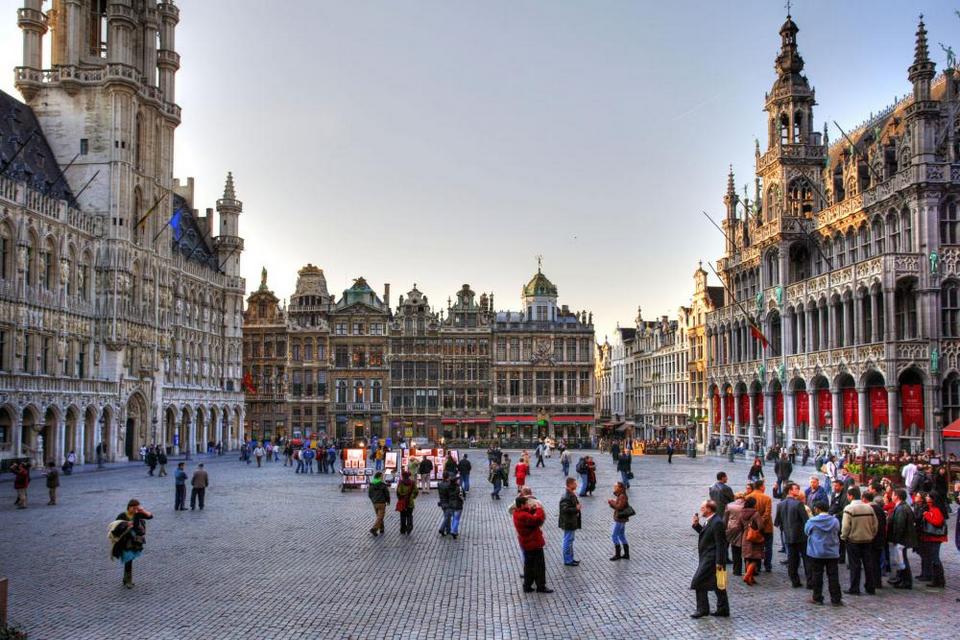 Wandering around the square, watching each building you will see each building has its own unique feature. They were built in Gothic architecture style with pointed arches on top and evenly-lined doorways, looking very eye-catching. In addition to City Hall, one of Grand Place’s most popular areas is King’s House (Maison du Roi in French), the remains are Guild Houses. King’s House was formerly a 13th-century bakery, later replaced by stone buildings in the 15th century and restored to 18th century Gothic architecture. It now becomes Museum Musée de la Ville is known for costume exhibitions for “Peeing Boy” – Manneken-Pis (will be discussed below). One note is that if you get foot fatigue after walk, don’t sit on the paved stone roads at Grand Place. 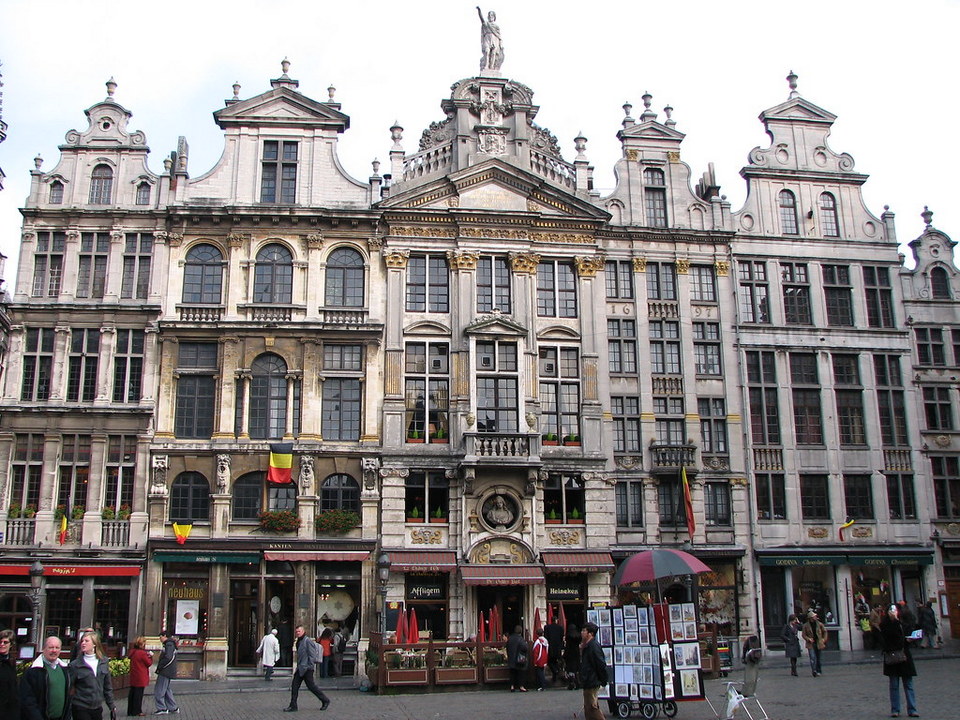 Like many other cities in Europe, Brussels is also a paradise for those who love museums and art. The museum in Belgium has many unique features such as a museum of Chocolate, a museum of Manneken Pis, a museum of musical instruments, etc. On Wednesdays and the first Sunday of the months there will be some museums are open free for sightseeing, you can see the list here.

Some museums you should visit:

Admission: €8, open for free on the first Wednesday of each month after 1pm, the museum exhibits many high-value artworks representing the artistic stages of the Flemish Baroque, Dutch Golden Age.

Ticket price of €8, open for free on the first Wednesday each month after 1pm, with thousands of different music and instrumental products. The Musical Museum is a collection area in four floors of display. You can spend a few hours to visit but want to know a little bit will probably take a few days. 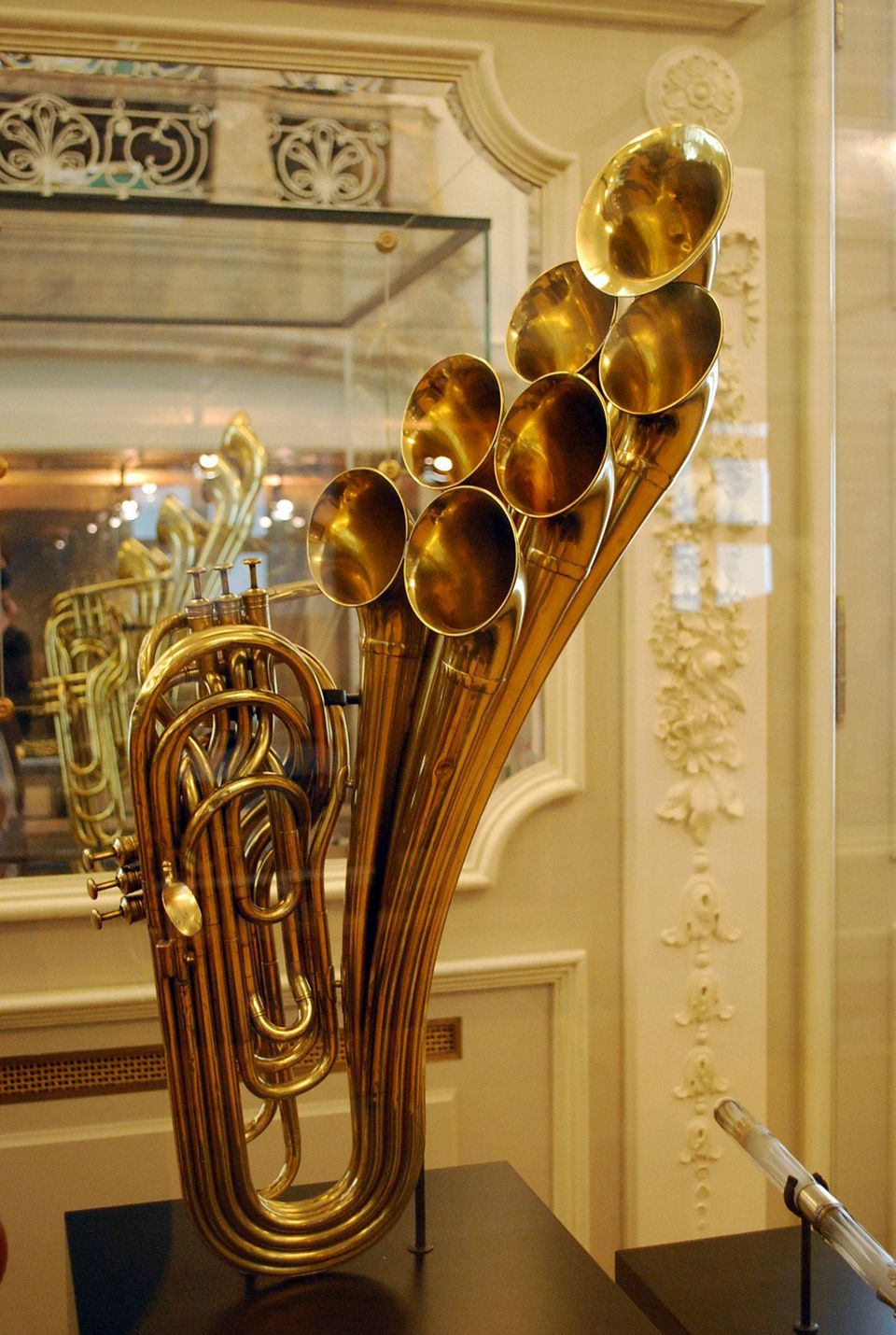 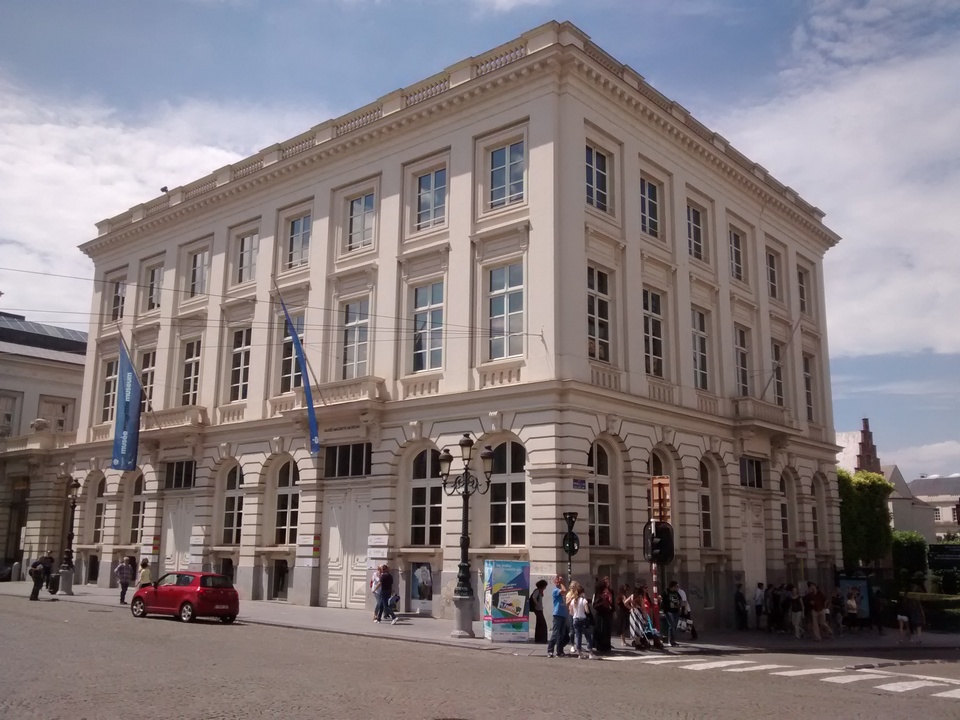 Rene Magritte is one of Belgium’s most talented artists with two famous works, The Pilgrim and The Son of Man. The Rene Magritte Museum is located in northern Brussels, far from the city center a little bit. The museum shows us an overview of person and career as well as the paintings of this surrealist artist. You can get here by taking the Metro Line 6 – Pannenhuis, €8 for admission. 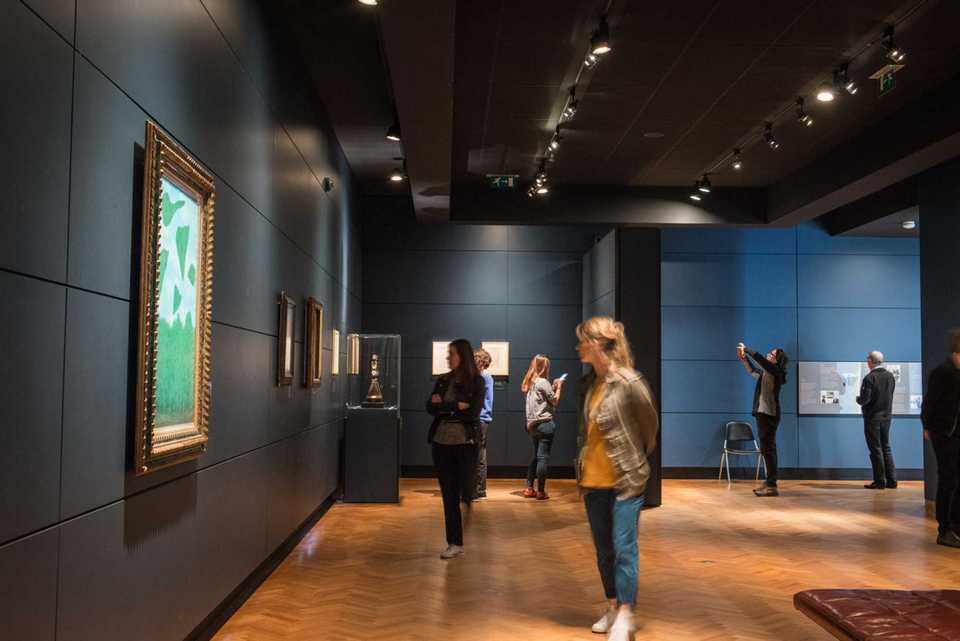 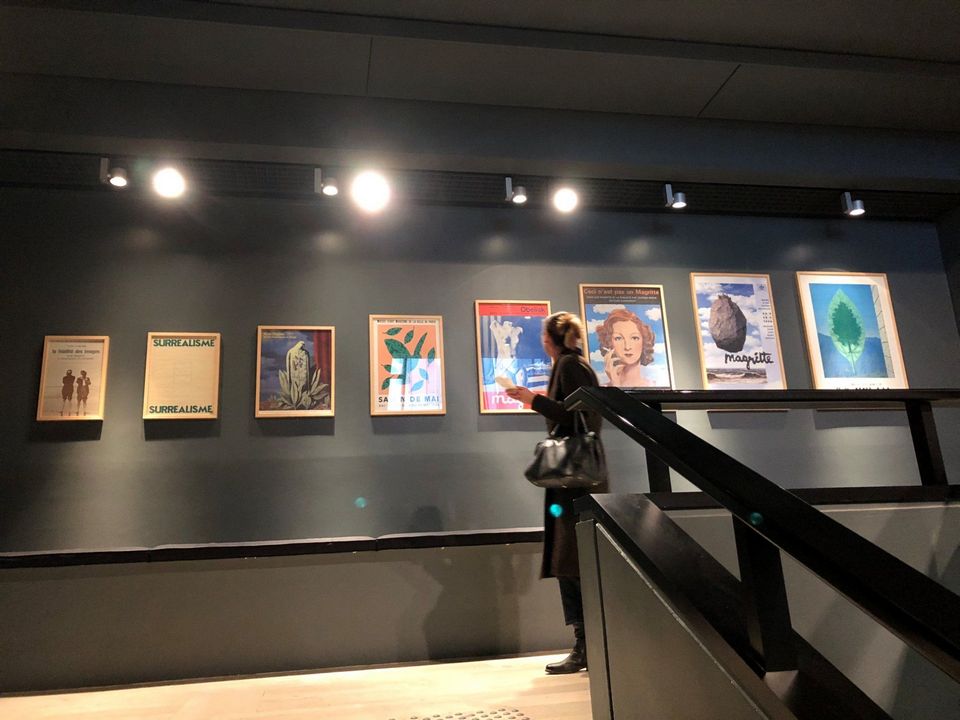 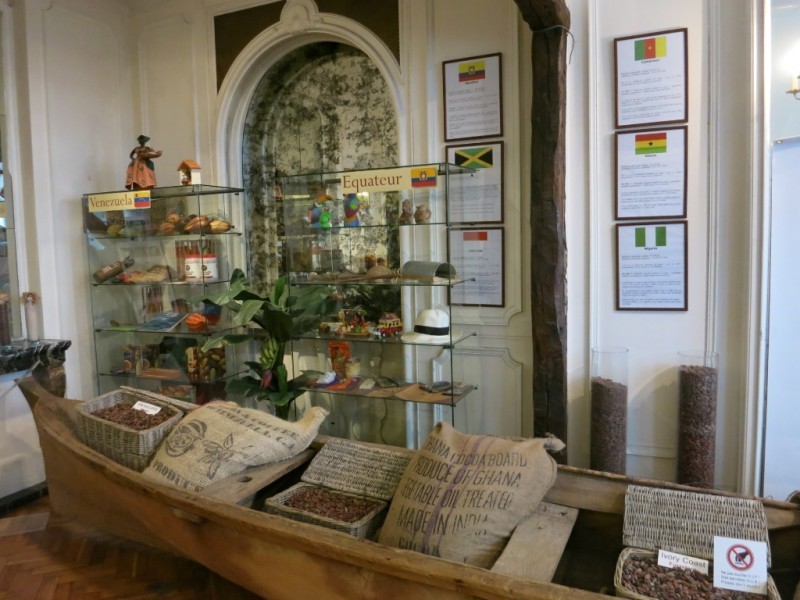 Belgium is very famous for its chocolate, it is unclear whether Belgium is home to chocolate or not because this is still controversial, but the delicious taste and fragant of Belgian chocolate is unmistakable with famous brands such as Godiva, Guylian, and Leonidas. Here you can see, learn about the history of Chocolate, watch the workers make Chocolate, how they mix, put ingredients to the mold, .. Choco-story Museum is located at Rue de la Tête d’Or / Guldenhoofdstraat 9-11 with a few minutes’ walk from Grand Place, the entrance fee is €6. 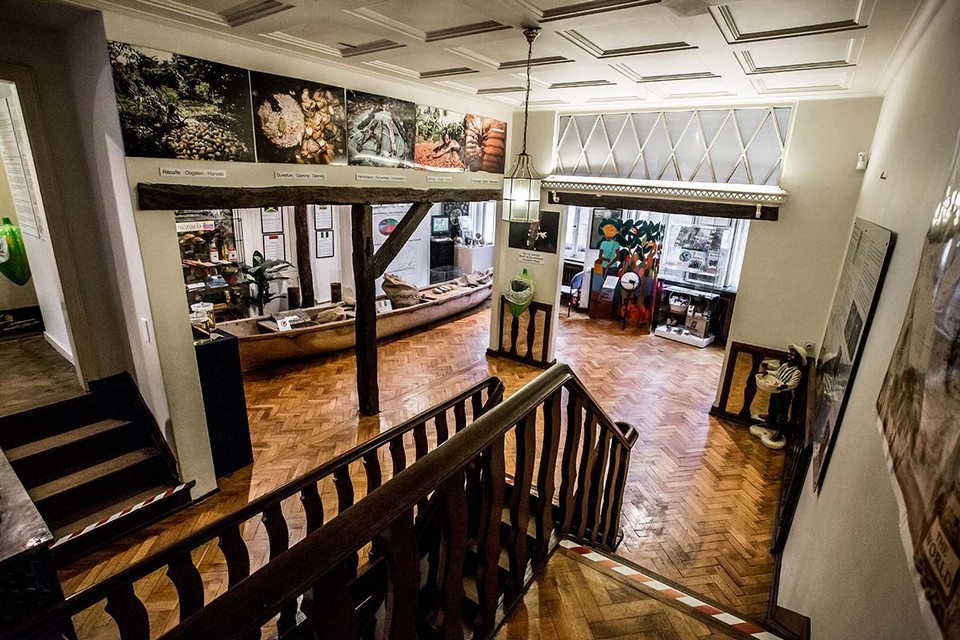 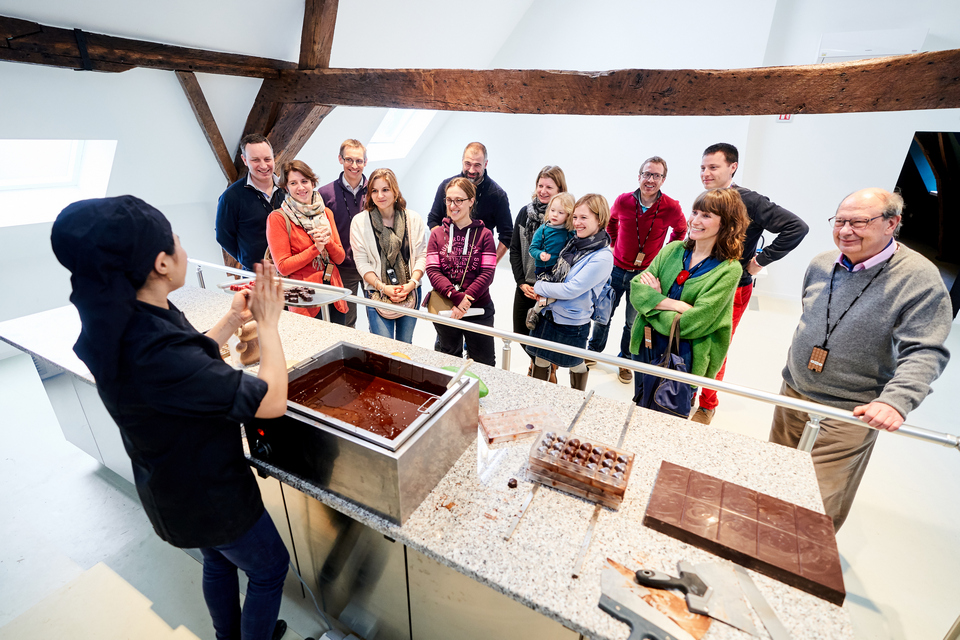 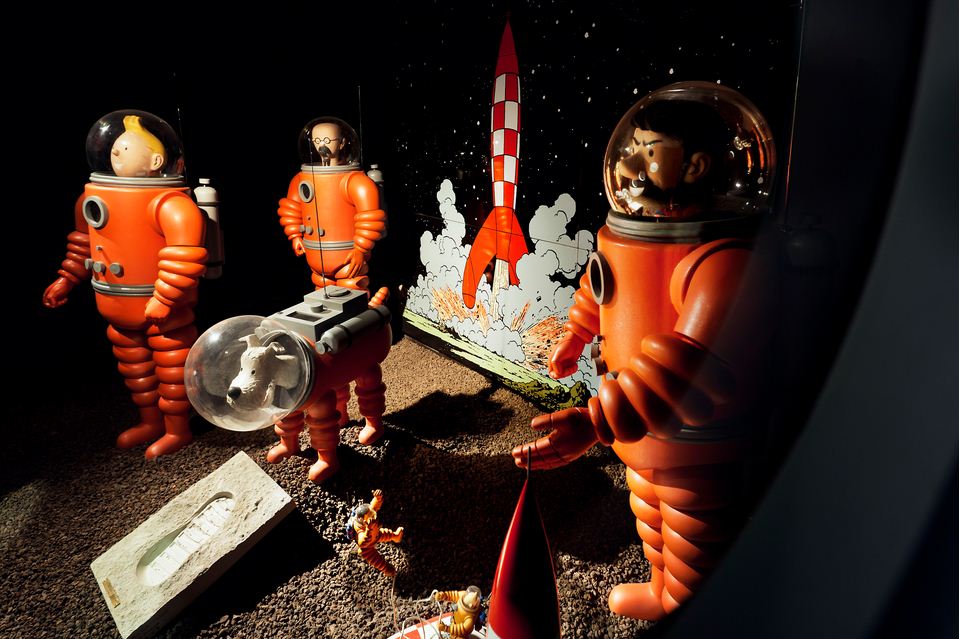 Belgium is not only known for its best Chocolate, it is also home to comics and famous cartoon characters like Smurf, Tin-tin, Lucky Luke… Here you will see a lot of lovely figurines about adorable cartoon characters, information about the history and development of animated films. The museum is located near the central station, passing Galerie Horta, the entrance fee is 10 €. And another comic book museum, Brussels Comic Book Museum, is a little further away from the center. 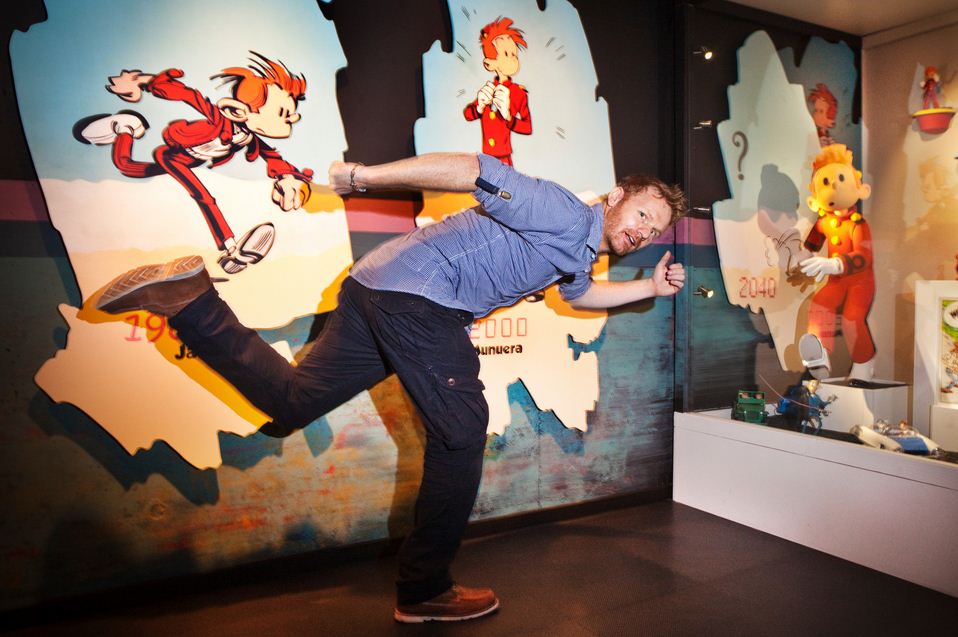 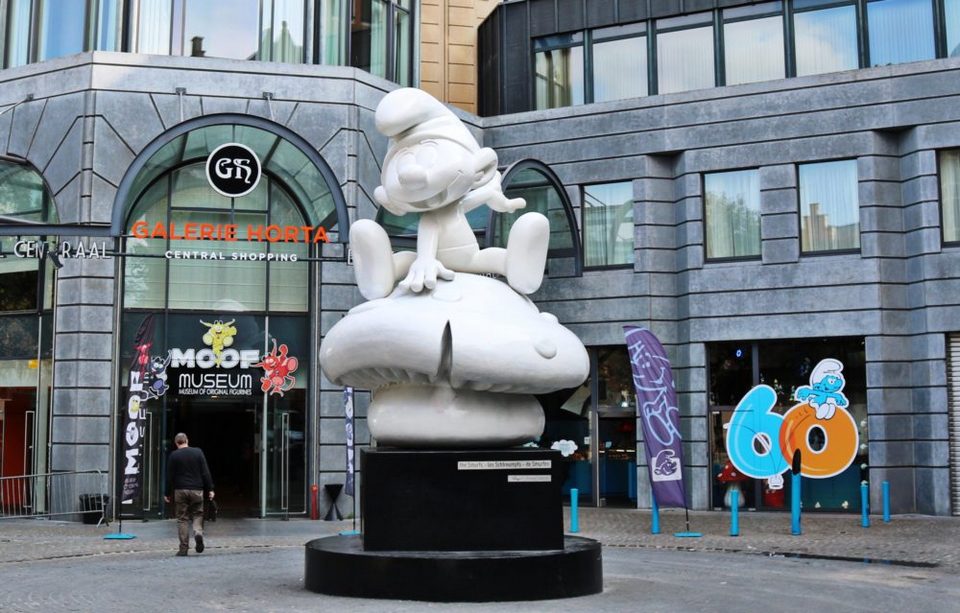 In addition to the above museums, Brussels also has many other museums such as Musée de la Ville de Bruxelles (Museum of the City of Brussels) displaying artifacts about the history, heritage of Brussels, Belgian Brewers Museum specializing in Belgian beer industry (ticket price € 5 ), Notre Dame Cathedral or Church of Our Blessed Lady of the Sablon (similar Notre Dame in Paris) … If you are museum lover, you should buy Brussels Card to be able to visit 41 museums for free in the city, discounts at some other attractions. There are Brussels Card types valid within 24 hours, 48 hours, 72 hours corresponding to prices of € 22, € 30, € 38, details of Card information, buy online card, you see here.

Manneken Pis statue is so famous that many people always think that this is the symbol of the city of Brussels. However, many people will be feeling disappointed by the statue so famous but the size is too small (only about 22 inches), not worth to be praised like that. 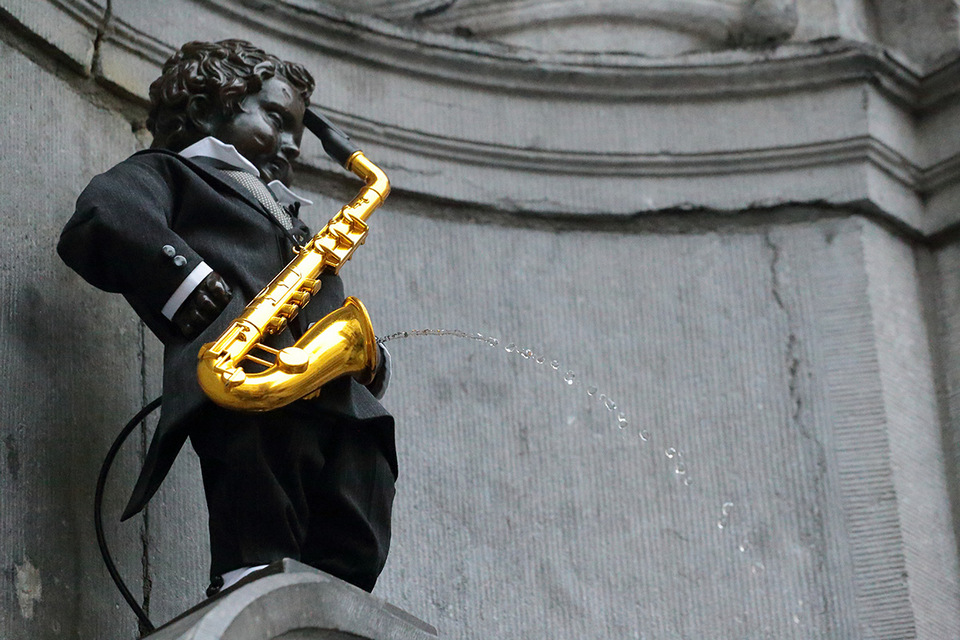