As a kid I travelled the recesses of my mind like Indiana Jones; a small blonde runaway in search of a newer world hidden behind the facade of an ancient one. The books that littered my nightstand were The Jungle Book, Myths and Mythologies of Ancient Egypt, Arabian Nights, and the daydreams that filled my mind belonged to jungle enthusiasts, Jane Goodall characters, and moustached men in khaki safari hats.

Once I grew out of my play phase and learned that all the corners of the Earth had already been discovered, I spent days and months coming to terms that my expeditions to find old civilizations within encroaching forests would have to be updated.

For a while I wandered around my house in despair, my black woolen adventure hat never leaving its hook on my wall. It was then my mum took me out on an expedition to my favorite haunt, the local public library, for a peruse among the new additions, thinking it might get me out of the funk.

That’s when I found it: A National Geographic photo essay on Cambodia.

From lush forests to golden temples, bustling streets stocked with food vendors and great wildlife vistas, it was like the adventure spirit inside had rekindled, recommitted, and was once again aiming to take the hat off the wall.

So every since that day, Cambodia has been the top of my list, and my adventure into the depths of its undiscovered legends and customs fulfilled all the kiddie daydreams that had piled up.

Don’t believe me? Check out my list of places not to miss in the land of Kampuchea, and then embark on your own journey—it’s too good but it is true! These are top 5 places to visit in Cambodia.

1. The Temples of Angkor 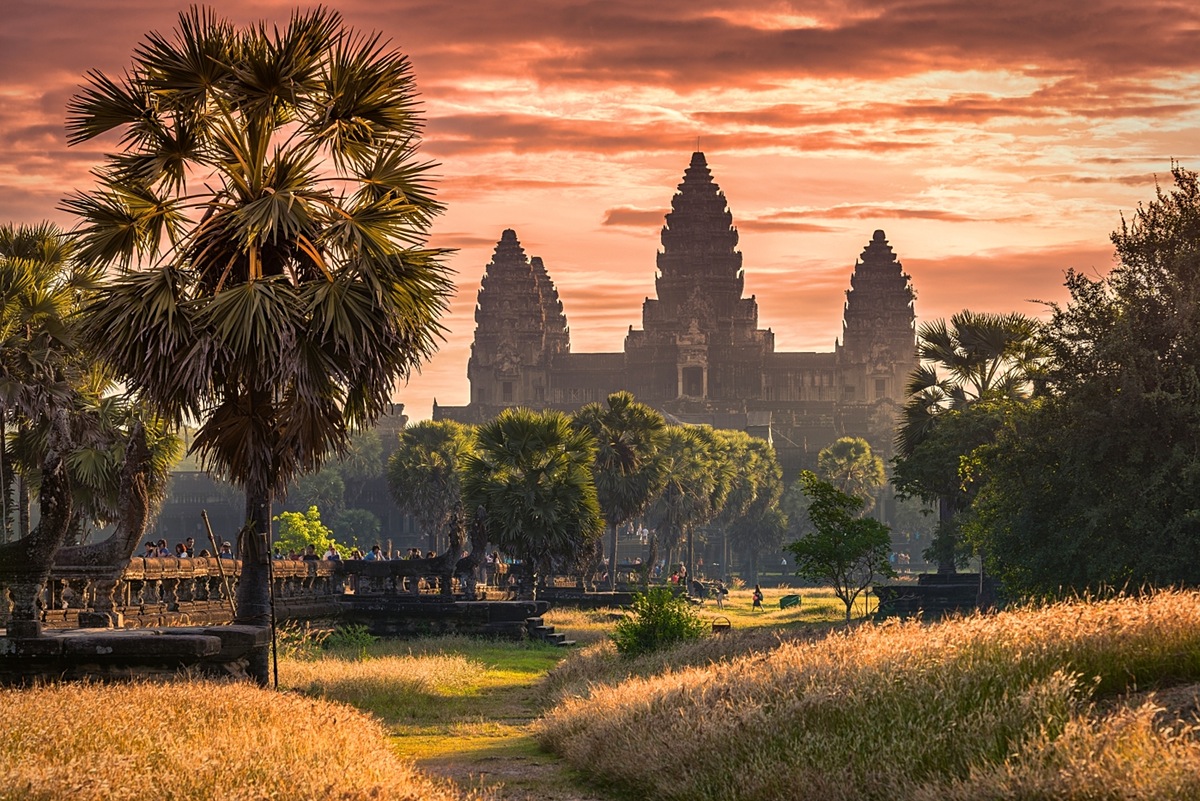 Even for one as desperate as myself for an authentic, non-tourist trek into the great unknown (and rural) areas of Cambodia, I still couldn’t resist the draw of the great Angkor Wat Temple (part of the largest religious complex in the world), so I made my way to the centre of Cambodian civilization for a walk into the diverse and complex history of this Southeast Asian nation.

The world heritage sites UNESCO status is cemented for many reasons: incredible advanced ancient waterways systems, including canals, dykes, and basins, as well as villages, priceless works of art, and for holding an immense amount of the world population during a time when Western Civilization was progressing through what is nicely called the Dark Ages. In great contrast in Southeast Asia, Cambodia was cementing its own architectural prowess and distinct style in the East.

Dedicated to the Hindu god Vishnu, the temple includes vast murals, extensive carvings, and the northern reflecting pool is a popular place for tourists to watch the sunrise. Make sure you grab a spot at each of the four buddhas before; you’ll have good luck for your troubles! For things to do outside of Angkor Wat, go for a day bike through the countryside or make a side trip to Phnom Kuhlen and the lost city of Mahendraparvata. Just make sure you don’t try to take this tour on your own, it’s required to have a guide into the city because there are still active landmines! 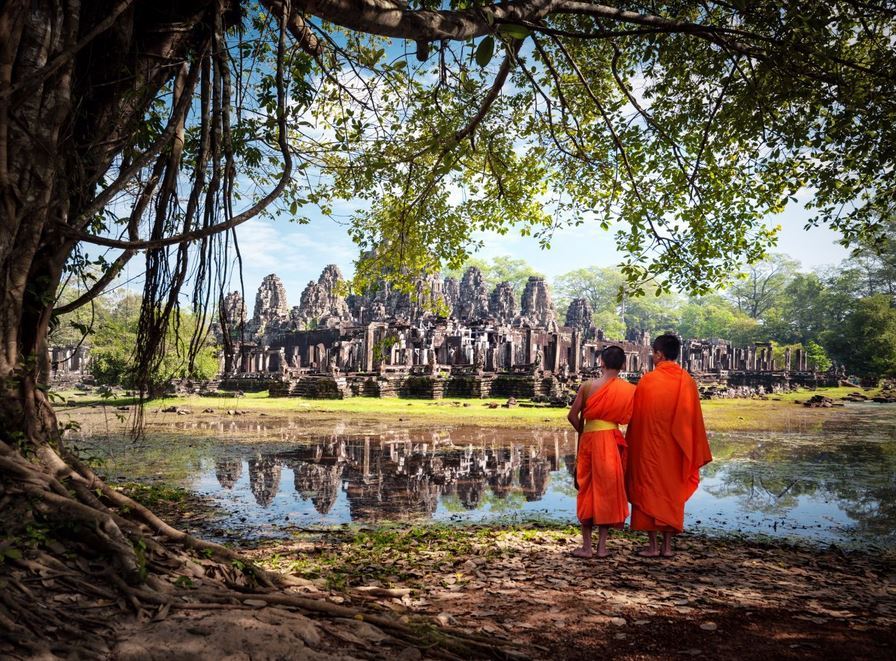 For getting around the city with a strapped budget, I started with buying a three-day pass of the temples for 24 euros that let me explore Angkor at my own discretion for a little longer than a rushed 1-day. It’s also available in 1- and 7-day if that’s more your style. I also rented a bike – cycling is my favourite way to see a city – and it’s better than waiting for a tuk-tuk every time you want to go somewhere (and saves a couple of coins).

While in Angkor I skipped the expensive hotels and all-inclusive resorts and opted instead for a stay at the Jasmine Family Hostel. Much like it’s more expensive counterparts, this joint hostel is family owned, has boutique-style accommodation, and has beyond excellent hospitality but it’s available for a fraction of the price (a couple of euros for a bunk in the dorms was perfect  for me). Plus it has the added bonus of being single-traveller friendly so there’s no reason to have a meal or go on an adventure alone unless you want to and they have a great list of one-of-a-kind experiences that you can take part in. 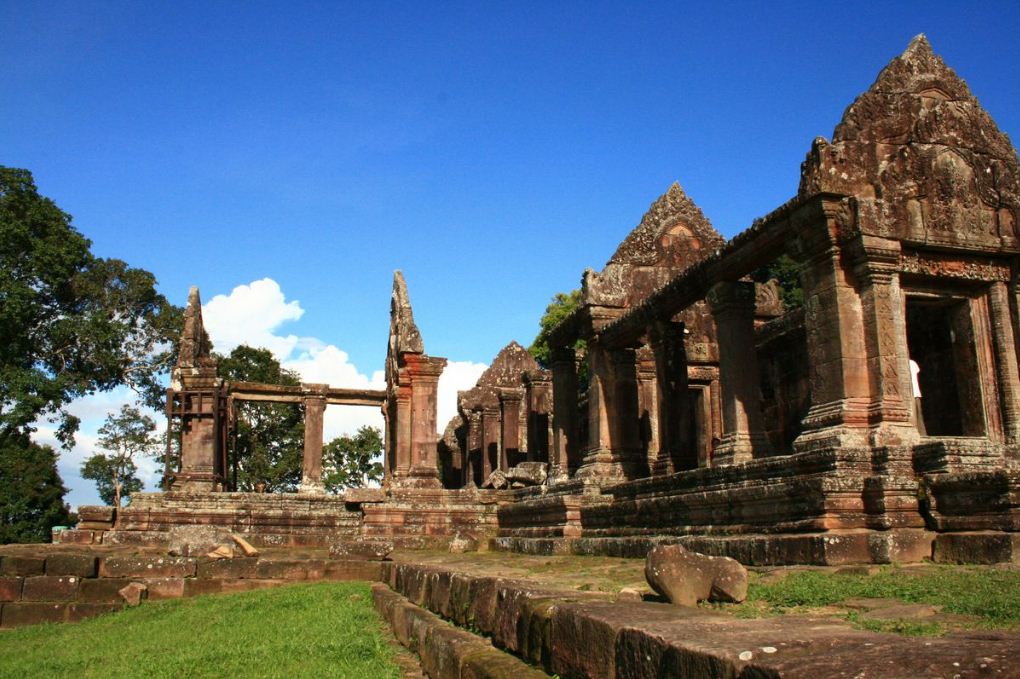 Another great religious site, Preah Vihear is situated on top of a vast cliff in the north of Cambodia and it comes with killer views and a little controversy, making it perfect as a sightseeing destination!

A little bit of history: When France drew up the lines between Thailand and Cambodia in the early 20th century, the mountaintop temple was partly on the Thai side, and partly on the Cambodian side. Of course, this drew many disputes as to who actually could lay claim to the property but when Cambodia became independent in the 1950’s, a court ruled that the entire Hindu temple was Cambodian rather than Thai, making it a little safer from a visitors standpoint, but no less controversial between the two countries. To understand the full scope of the Cambodian position, make sure to learn up on the contemporary history of the country; it’s truly fascinating and a great way to spend your in-flight time. 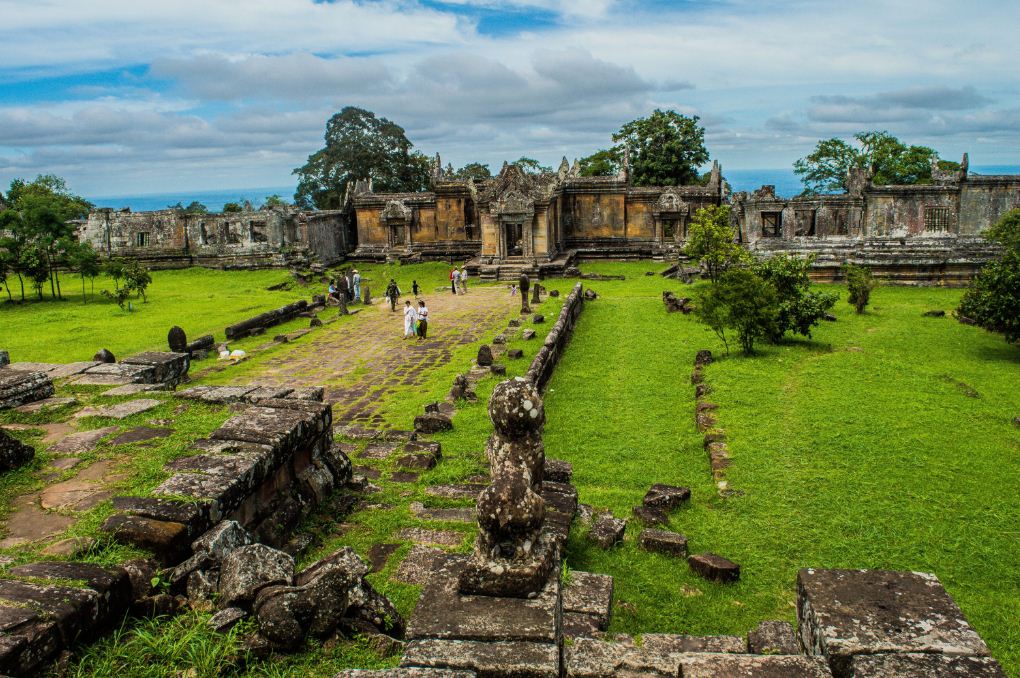 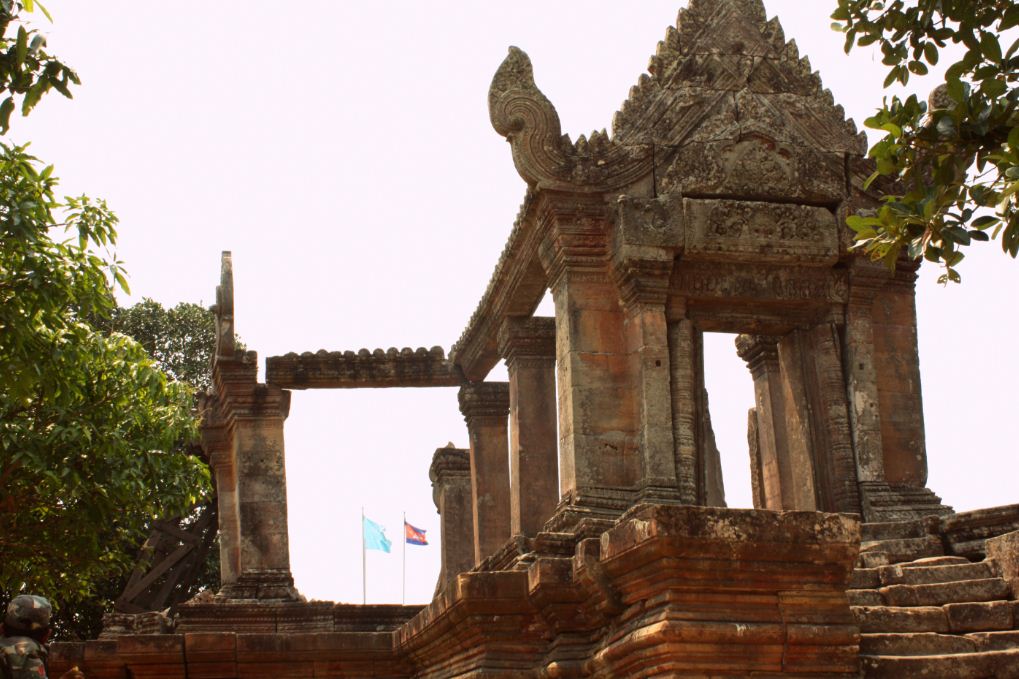 How to get there and where to stay: the location of the temple makes it hard to get to, but don’t let that deter you. There’s a Cambodian military checkpoint at the bottom of the hill (you can see the flag of the Thai checkpoint as well), so have your passport ready. Entrance is free, so press on to the top of the hill to get a look at crumbling ruin. For accommodation, book a room at the Javier Guesthouse for about 13 euros a night. It’s located in the Preah Vihear City and you can take a motorbike taxi from your accommodation straight to the top of the temple if that’s your pleasure. It’s remote, and a little less traveled than Angkor, but that’s all part of the charm. 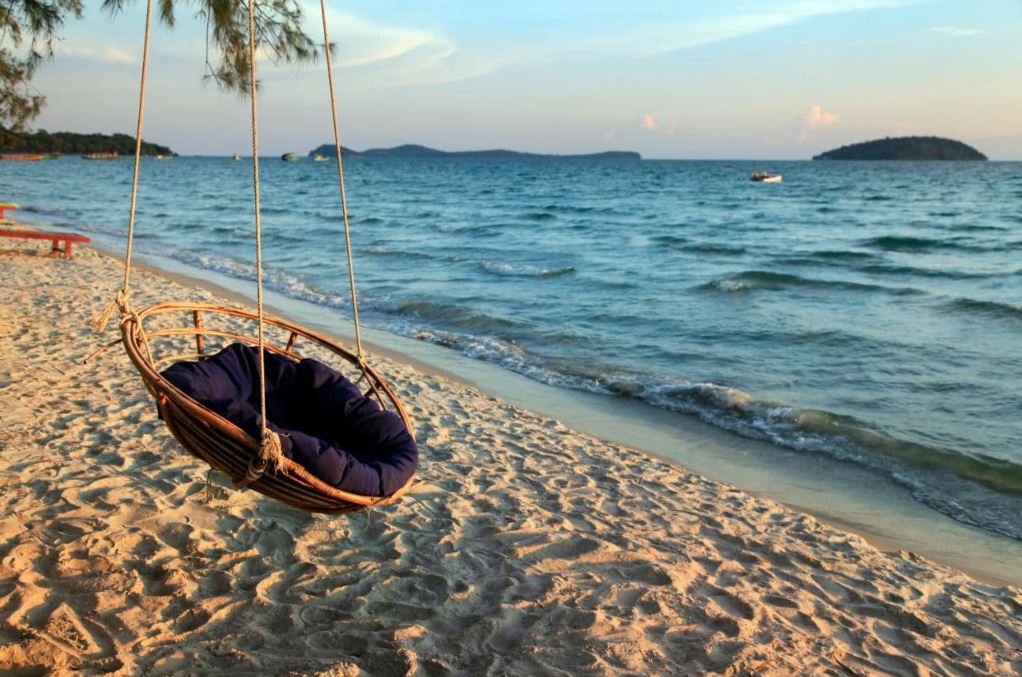 Otres is a off-the-map traveller’s maven; it’s where the tourist experience goes to get away from the huge crowds of Angkor, and where you’ll actually get to experience an exotic beach paradise. Unlike many of the more famous Cambodian beaches, the guesthouses along the shore here make up a very small section of the beach and leave the rest for awesome sunbathing, swimming, and just taking in the excellent view. The water is warm, the hammocks are hung high, and the most heard phrase when it comes to recounting tales of this paradise is the ever-used (though actually true in this case): “Go now before everything changes.” 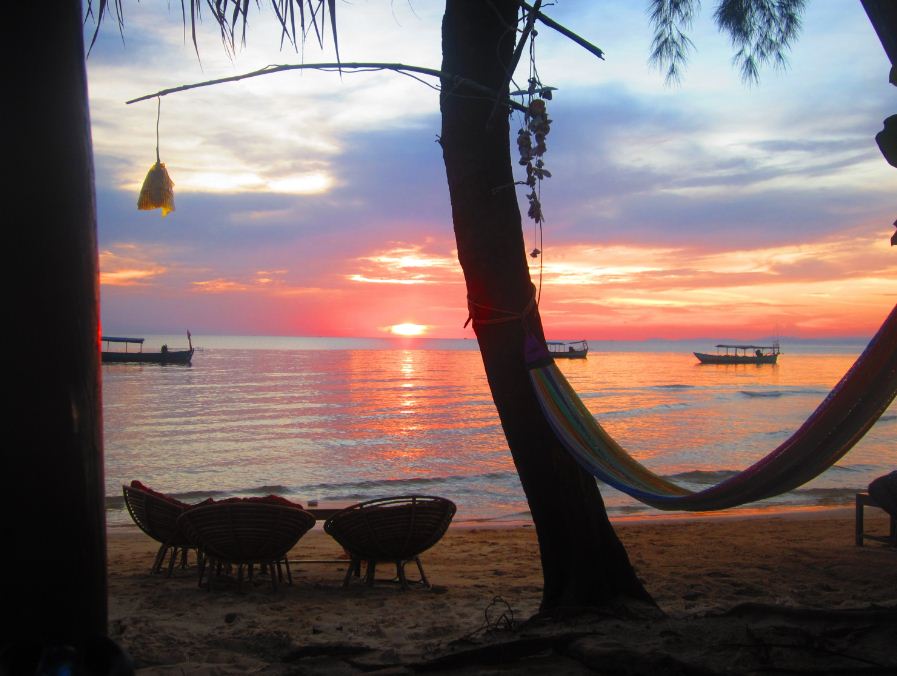 Do: Get a dinner and cocktail to watch the sunset every night – it may seem posh, but it’s definitely the place to watch a sherbert-coloured vista (and to snap killer photos if that’s your jam). Stay at the Moonflower Bungalow, the average price per night is around 20 euros for two (it was a little cheaper when I stayed because I went in the off-season, but it’s still great value), and a bonus is that there are scooters for rent at 5 euros per day, which is great if you want to take a day or two to explore the island. If you want to swing in the hammock all day, that’s a great choice too; it’s completely up to you and you certainly can’t go wrong either way. 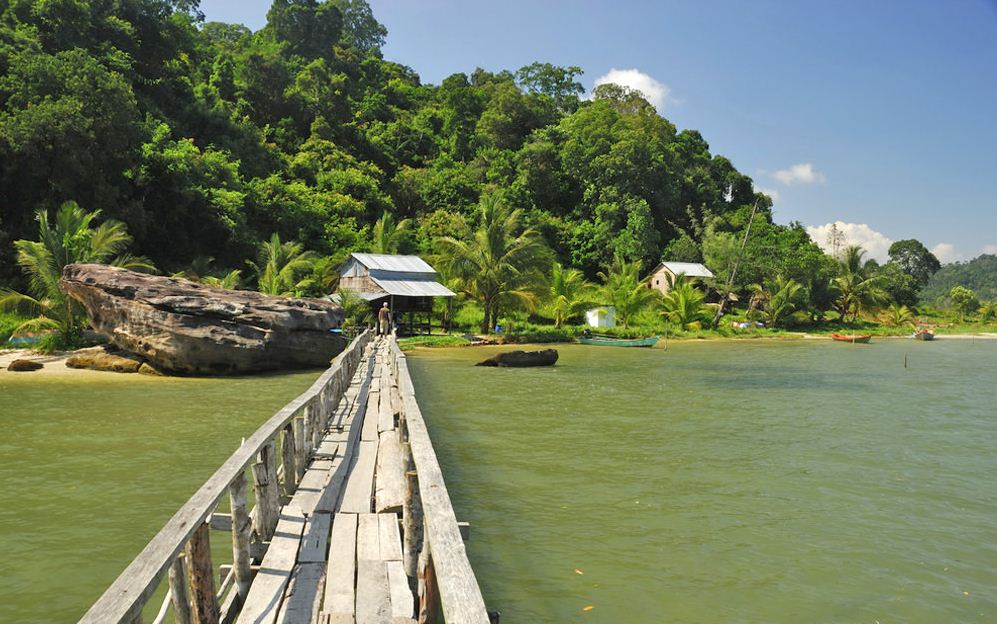 Ream National Park is in the same province as Otres Beach (the beach is in Sihounoukville, only 18km from the park) so it makes a perfect daycation, or side trip to make, and I definitely recommend a stop at this Southeast Asian natural wonder. 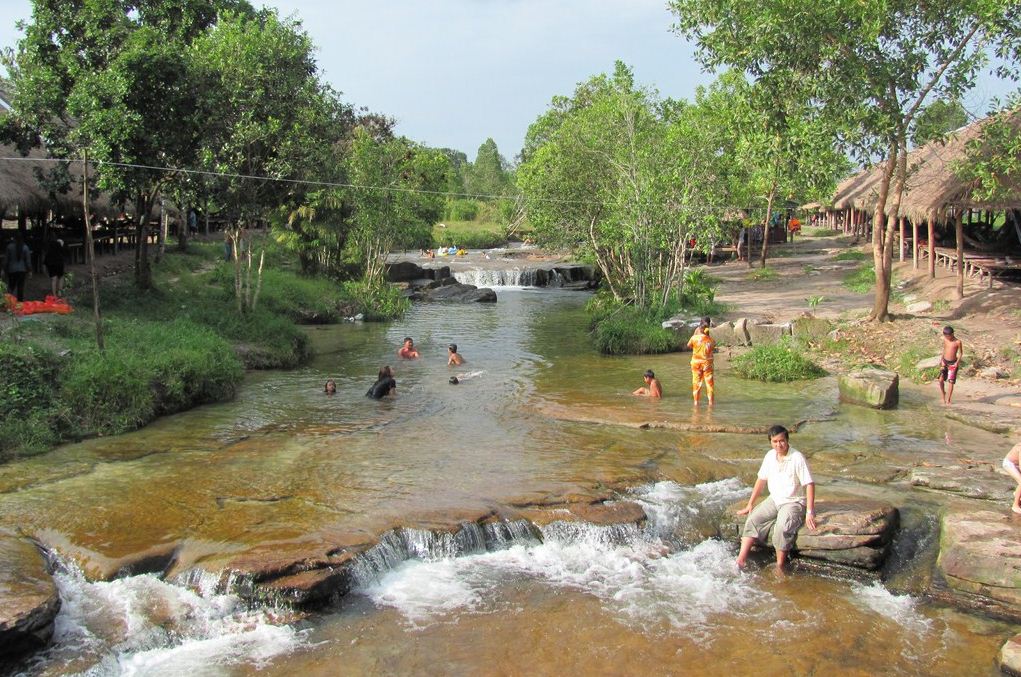 The best way to do it is to grab a scooter from the bungalow, and take a travel at your own pace. Between the fishing cats (hard to spot, but they are around, and if not, check out the adorable otters), mangrove swamps, and excellent birdwatching (everything from fishing eagles to kingfishers), it’s the perfect day to spend the day. If you’re looking for something a little more in-depth, head for the island of Koh Thmei; it’s virtually empty with no village to speak of and one “resort” with no more than a dozen beach bungalows. Not only will you enjoy the solitude, but the snorkeling here is really wonderful, and if you’re travelling between December and April, you can spot the migrating dolphins. 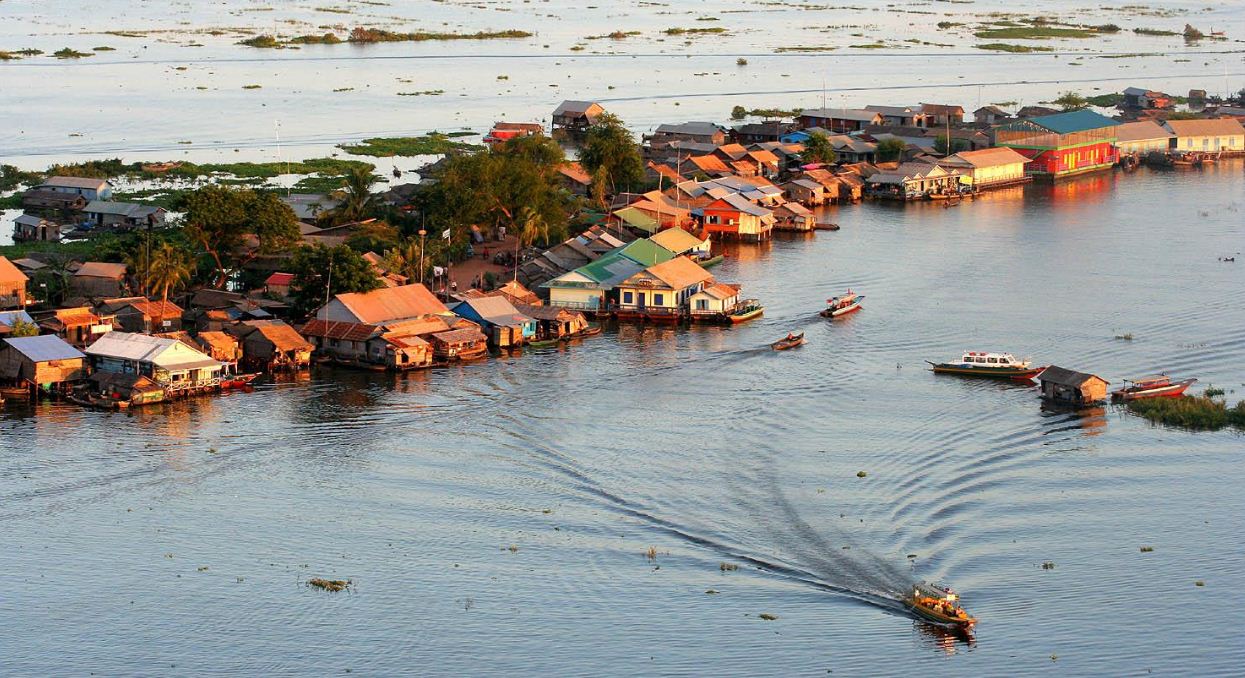 One of the great things about staying at the Jasmine Family Hostel was my discovery of an excursion trip to Tonle Sap Lake. With the Floating Forest package (2 days + 1 night), I got to travel on the lake, which sports a stellar ecosystem, and take a good long look at the rural parts of Cambodia that I was so looking forward to. 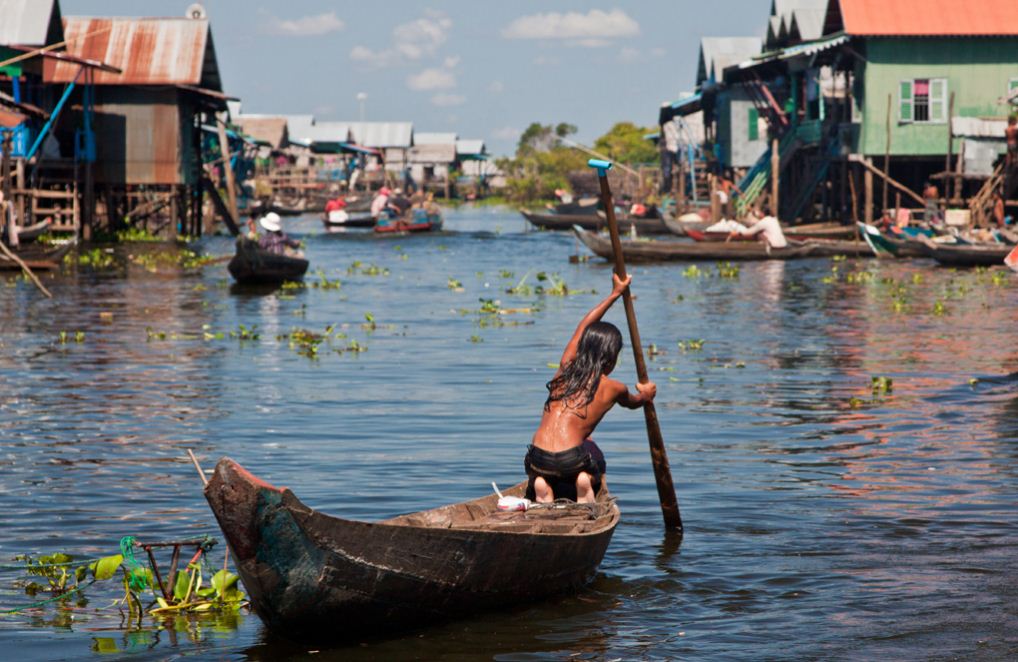 Between the stilted villages hovering over the flooded forest to getting an up-close look at the lives and traditions of the natives, the tours unique perspective into the inland Cambodian “sea” meant getting to watch fishermen work, check out the local schools, and, if you’re in season, do it all from a paddle boat.